In a time of enchantments when legends and magic collide, the sole remaining warrior of a mystical order (Jeff Bridges) travels to find a prophesized hero born with incredible powers, the last Seventh Son (Ben Barnes). Torn from his quiet life as a farmhand, the unlikely young hero embarks on a daring adventure with his battle-hardened mentor to vanquish a dark queen (Julianne Moore) and the army of supernatural assassins she has dispatched against their kingdom.

Watching the supernatural fantasy epic 'Seventh Son' is like witnessing the incidental reunion of 'The Big Lebowski' when Jeff Bridges and Julianne Moore finally share some screen time. I just wish the filmmakers hadn't waited until the end to bring them together. In a CGI-laden feature that runs just under two hours, they should have spent more time with each other because they are the only two with any convincing chemistry. And they're supposed to be mortal enemies, each trying to brutally murder the other with the sort of fiery, passionate hate which can only come from the pain of a broken heart. While the rest of the cast, which includes a noticeably bored Olivia Williams and a flat Djimon Hounsou, act with the wooden equivalency of a grade school play, the two veteran actors are the driven force behind a movie that has been shelved for the last two years.

Moore's Mother Malkin is the maleficent, vengeful queen witch ripped from the pages of practically every fairytale ever written, but looks like the reigning president of the Disney's Dark Villains Association. The DDVA is known for their excellent comprehensive health and dental plan, which includes an optional weekly beauty spa treatment for its female members. Who says you can't look drop-dead gorgeous and the envy of spiteful, annoying princesses everywhere when laying waste to the world. Garbed in revealingly tight dresses adorned with long, pitch-black plumage around the neckline, Moore is stunning as she plays the conniving, cold-hearted temptress, a strong feminine character similar to her Maude Lebowski. Only here, she's determined to destroy all life rather than be impregnated and bring more avant-garde bundles of joy. Her devoted gang of sorcerers from various cultures are like the German nihilists who even come with their own industrial music soundtrack when rampaging a local peasantry. 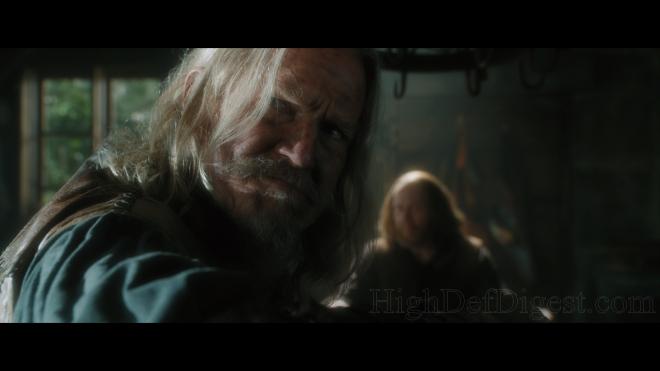 Weirdly — or funnily, depending on your perspective — Bridges also does an older version of his intoxicated, out of work, bowling-enthusiast slacker as the inebriated, unemployed, supernatural-aficionado slacker Master John "The Spook" Gregory. However, and although still dressing like a vagabond loafer, "The Dude" has somehow grown more bitter and surly with time, bringing a bit of Rooster Cogburn's crusty, grouchy brashness into the mix with the same croaking, mumbling garble-speech that sometimes is indecipherable. As with the search for compensation over a ruined rug, Master Gregory wants reparations for past wrongdoings and recruits the help of mild divinatory Tom Ward (Ben Barnes). He's the titular seventh son of a seventh son and not surprisingly, serves as the Donny equivalent, a naïve, kindly apprentice continuously interrupting Gregory's Walter-like diatribes about his war experience. We even have a Bunny Lebowski in Alicia Vikander's Alice Deane, who earns Tom's confidence but clearly hides ulterior motives.

But enough with the comparisons because in truth, 'Seventh Son' is really not all that terrible. It may not be the earth-shattering Second Coming of the supernatural fantasy epic we've being waiting for since 'The Lord of the Rings' or the 'Harry Potter' series, but it's not altogether bad either. As far as young-adult books translated to feature films go, this adaptation of Joseph Delaney's The Spook's Apprentice is quite entertaining. Even if the computer-generated imagery can at times feel somewhat encumbering to the point of oddly weighing down the pace, the film is more imaginative and visually engaging than most. And yet, as seems to be the case with surprisingly good fantasy teen-oriented flicks like 'The Giver,' 'Ender's Game' and 'The Maze Runner,' the movie goes largely unappreciated by its target audience. Helmed by 'Nomad' and 'Mongol' director Sergei Bodrov, the film will likely go down as this year's biggest box-office flop. Perhaps producers should have turned to Malkin's black arts for a stronger story and a larger return because here is where the apprentice's tale ends.

Universal Studios Home Entertainment brings 'Seventh Son' to Blu-ray as a two-disc combo pack with an UltraViolet Digital Copy. The Region Free, BD50 disc sits comfortably opposite a DVD-9, and both come inside a blue, eco-elite case with a shiny, glossy slipcover. After several skippable trailers, viewers are taken to a static menu with music.

The seventh son of the seventh son goes witch hunting with a frequently stunning and highly-stylized 1080p/AVC MPEG-4 encode that wows as often as it leaves viewers scratching their heads. The most noteworthy issue is the intentional photography of Newton Thomas Sigel ('Drive,' 'X-Men: Days of Future Past'), which isn't altogether bad if only oddly inconsistent. Shooting entirely on HD cameras, the cinematography alternates from sharp deep focus during CGI-laden action sequences to soft diffusion filters, creating a dreamy haze during more intimate conversations. Thankfully, those softer moments don't lose any of the ultra-fine definition, maintaining excellent visibility and detailing of the surrounding foliage, on the costumes and the revealing facial complexions. However, it's noticeable enough to almost be distracting and makes much of the presentation appear sterile and digital, like a made for TV soap opera.

The color palette, on the other hand, pops with energy and enthusiasm throughout, and contrast is comfortably bright and terrifically well-balanced. Brightness levels could be a tad stronger, but overall, blacks are accurate and true, providing the 2.40:1 image with a nice and welcomed cinematic quality.

The Spook's apprentice does battle with all sorts of sorcery and witchery with this exceptional, reference-quality DTS-HD Master Audio soundtrack that gives the sound system a nice, thorough workout.

From the start, imaging feels wide and expansive as a plethora of ethereal sounds spreads across the screen, moving fluidly and with ease between the three front channels. Separation with very well-balanced and dialogue remains distinctly clear in the center while dynamic range delivers outstandingly sharp, room-penetrating clarity. Marco Beltrami's score benefits the most, exhibiting extraordinary separation and fidelity between the various notes and instrumentation. Giving the amount of action involving giant monsters, dragons and powerful magic, the low-end provides an authoritative punch that dig deep into the ultra-low depths, rattling walls and nicely shaking the couch (Bass graph).

Adding to the excitement is the nearly endless activity occupying the rears, throwing the listener right in the middle of the many supernatural battles. Whether someone is casting a spell or Master Gregory flings one of his potions, tiny sounds of debris flawlessly pan from the front to back or from one side of the room to the other. During fight sequences, dragons fly overhead or circle all around while swords and Gregory's staff swing at their targets, and Radu's spiky-chained axes loop wildly everywhere, generating an immersive soundfield. Even quieter, conversation scenes, like Gregory's stronghold or a night walk through a forest of specters, maintain a satisfying 360° environment with the subtle noises of local wildlife, the weird contraptions churning or the haunting voices of the dead. Whatever the scene, fans will love this demo-worthy lossless mix.

As far as young-adult books translated to feature films go, 'Seventh Son,' adapted from Joseph Delaney's The Spook's Apprentice and starring Jeff Bridges and Julianne Moore, is quite entertaining. Even if the computer-generated imagery can at times feel somewhat encumbering to the point of oddly weighing down the pace, the film is more imaginative and visually engaging than most. The Blu-ray arrives with great picture and reference-quality audio, but the supplements are disappointingly small yet edifying. The overall package, however, makes for a good rental.

Sale Price 10
Buy Now
3rd Party 2.34
In Stock.
See what people are saying about this story or others
See Comments in Forum
Previous Next
Pre-Orders
Tomorrow's latest releases