Son of a Gun

When JR (Brenton Thwaites) is sent to prison for a minor crime, he becomes the apprentice to Brendan Lynch (Ewan McGregor), Australia's public enemy number one. However, when JR helps Brendan break out, they go on the run and form a complex co-dependent relationship that will be more dangerous than the heists they plan and the enemies tracking them down.

'Son of a Gun,' writer-director Julius Avery's debut feature film is at times a breakneck actioner grounded in an intense and captivating performance by Ewan McGregor. It is also at times a potentially compelling study of a father-son relationship in which a young man (Brenton Thwaites, 'The Giver') comes to grips with his identity by discovering what he is not. And while this element helps propel the story from its claustrophobic beginnings inside an Australian prison, to a tale of robbery, murder, and mayhem, the film and its characters too often fall back onto a simplistic binary of lover vs. fighter, diluting the narrative by avoiding the more complex issues that arise by virtue of its subject matter.

With its intense sequences of expert criminals engaged in complicated heists, followed by violent, well-choreographed escapes, the film could have easily been called 'Australian Heat.' McGregor's career criminal Brendan Lynch, and his merry band of accomplices, played by Matt Nable ('Arrow'), and Merv (Eddie Baroo) make for a convincing trio that isn't entirely removed from Neal McCauley and his fellow thieves. What separates the two, then, is newcomer JR (no last name, but with initials that could easily be turned into Jr.), the 19-year-old convict played by Thwaites who is taken under Brendan's wing while in prison, forming the bond that becomes the central thematic element of the story.

The film doesn't go into either character's backstory much; it never reveals why JR was sent to prison, nor does it offer anything more about Brendan's history than it was significant enough to have been written about. The two initially bond over a game of chess, which Brendan plays via messages sent back and forth to an associate on the outside named Sam Lennox (Jacek Koman). JR first presents himself as a fan, a would-be groupie whose advances are spurned until Brendan and his men witness JR's wild attempt at stopping his cellmate from being gang raped by the prison's resident pack of sexual predators. This attempt not only fails, but it also lands JR on the group's radar. Brendan steps in with an offer to help, and although it acts as the catalyst that forms the bond the two eventually share, it comes with a steep price.

Avery succeeds in turning prison into the kind of pressure-cooker situation where such a strong bond could plausibly be formed, making the intense but slow burn of the initial sequence a valuable piece of relationship building. Following an exciting prison break, though, the relationship between Brendan and JR is inevitably altered into one where the young man is no longer an outsider, and yet not quite an equal partner. JR is introduced to Brendan's code of honor, when he witness firsthand the group's reaction to finding out Merv lied to them about the circumstances of his conviction. While the incident works to establish Brendan as a likeable rogue with his own brand of ethics – not just a violent sociopath and career criminal – it does little to color the relationship between the two men. 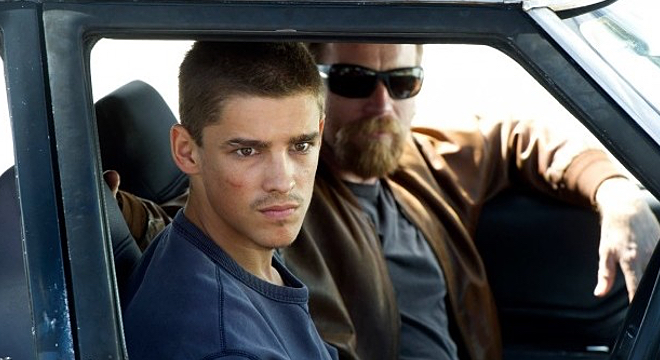 The potential richness of JR's association with Brendan is further stunted by the arrival of Tasha (Alicia Vikander), Sam's kept woman, the forbidden fruit who JR naturally falls for. Although Vikander plays Tasha as a mix between femme fatale and hooker with a heart of gold, the forbidden romance she enjoys with JR begins the love affair 'Son of a Gun' has with cliché.

It would be one thing if JR and Tasha were compelling characters on their own, or if the stakes of their relationship were higher than the threat of (the frankly impotent) Sam finding out, but neither character nor romance offer much beyond an attractive surface. Even together JR and Tasha fail to match the power of McGregor's performance, which makes the film's shift away from Brendan's palpable intensity, feel all the more pedestrian and banal. It also undercuts the film's central reason for being: the exploration of JR's attempt to make Brendan his surrogate father, and Brendan's almost instinctual response to treat the boy like a son.

That dynamic is tested when JR and Brendan find themselves on the run from the law and from certain associates, following a brazen gold heist worth millions of dollars. JR almost absentmindedly follows Brendan into dangerous situation after dangerous situation, and while McGregor holds up his end of the bargain, maintaining a Svengali-like appeal, JR's placid compliance reads as too easy.

The relationship is reminiscent of the one in David Michôd's more emotionally complex and engaging 'The Rover,' in which Robert Pattinson's emotionally stunted character naturally gravitates toward Guy Pierce's figure of authority and control (even though he and the world around him represent total chaos). The dynamic here is much the same, but JR's actions are tied up in a want that exists outside the only intriguing interaction happening onscreen. And Avery's attempts to boil his characters down to either a lover or a fighter – as outlined in a bit of on-the-nose dialogue about chimpanzees and bonobos, and followed up with a conspicuous poster hanging on the wall of a safe house, featuring an image of said chimpanzee – only serves to make the disappointing allusion to the binary all the more unfulfilling.

The result, then, is a third act that turns into a twisty ride of paranoia and deceit that is again made more vivid and lived-in by McGregor's increasingly fiery performance. But while McGregor acts as the foundation on which the denouement is set up, it relies too much on off screen events to make the finale resonate with the kind of intensity seen in the film's early moments.

In the end, 'Son of a Gun' is a satisfying showcase of McGregor's range as an actor, as the ferocity and charisma of Brendan become the film's strongest points. It also earns high marks for the ambitions of its plot and the world building of a very specific underworld. And although the characterization of JR and Tasha falls too quickly into cliché and banal sentimentality, and ultimately takes the narrative in an inorganic direction, there are encouraging sparks of what Julius Avery's storytelling could one day become. Here's hoping those sparks are nurtured and develop into something as fierce and intense as the performance McGregor gave in this film. 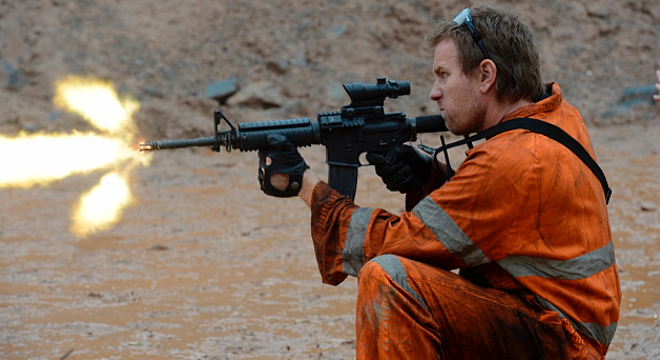 'Son of a Gun' comes from Lionsgate as a single 25GB Blu-ray disc + HD Digital Download. The film comes in the standard keepcase that is housed in a cardboard sleeve, featuring the same artwork as the insert. The disc is loaded with previews both old and new before the top menu. The film comes with a single featurette and director's commentary.

Despite its dark premise and underworld-friendly narrative, 'Son of a Gun' offers a surprisingly bright transfer that is loaded with fine detail. Scenes in and out of prison, on the road, or in the middle of a heist almost exclusively take place during the day, giving the image plenty to focus on. As such, fine detail is present in the form of facial features, background elements, and especially textures in clothing and environments. Certain scenes do suffer from the occasional bout of soft focus, but for the most part the image is crisp and very sharp, with strong, well-defined edges.

The film takes on an unsurprisingly warm palette that is filled with colors that range from blonde to muddy brown – even McGregor and Thwaites' skin tones and hair colors seem to blend in with the film's palette. Still, the consistency of the palette doesn't prevent the colors from being vivid throughout. There is a wide range of colors present, all of which are clear and distinct. Contrast is high, especially in what is presumably the heat of Australia. Although the sun is often depicted as being blindingly hot, the image never looks blown out or overheated. Blacks are consistently full-bodied. Shadows range from smoky to inky, maintaining a high level of detail. There is no issue with crush or banding anywhere.

Aside from the aforementioned issues of soft focus – which seem to happen during low stakes tracking shots, thankfully – this is a strong image that is full of detail and vivid color.

The DTS-HD Master Audio 5.1 mix is a real treat. The audio offers a dynamic range of sound that delivers sharp dialogue, but also balances that with explosive action sequences that fill the room with sound. The film's major set piece – a high-speed chase following a bold heist – is loud and energetic, but it contains subtleties and nuances that make it more than a room-shaking action sequence. Dialogue remains solid throughout, while the rear channels deliver an immersive experience that shifts dramatically, depending on whether or not the camera is inside the vehicle in question or not. The distinction drives the intensity of the moment, as the claustrophobic exclamation of the criminals makes the pursuit's shift to the outside feel all the more palpable.

But the sound delivers much more than high-octane action sequence. It also delivers dynamic moments like when a visit to Damon Herriman's (a.k.a. Dewey Crowe from 'Justified') Wilson turns into an impromptu two-man rave, followed by some target practice on a few abandoned cars. There is another atmospheric moment at a party, where the ambient noise of various conversations and music in the background create an immersive listening experience that sells the moment.

Overall, this is a great sounding disc that delivers on moments big and small.

Audio Commentary with Writer/Director Julius Avery – Avery presents an interesting look at his film, as he talks his way through the logistics of making a full-length feature film. Avery manages to keep the discussion going from start to finish, and even offers some insight into what it's like to be a first-time filmmaker (he's completed several shorts) with a star like McGregor on hand.

Partners in Crime: The Making of Son of a Gun (HD, 12 min.) – This is your average making of featurette, but it does offer some entertaining interviews with McGregor and Thwaites. Although it doesn't really give any additional insight into the film, the focus on the actor's interpretations of their characters is interesting.

'Son of a Gun' lives almost entirely on the virtuoso performance of Ewan McGregor. Although the story aims to focus outside his circle of influence, it is never able to escape the pull of his charisma. This is both good and bad, as McGregor's performance offers a compelling reason to watch, but it also underlines the shortcomings of the rest of the film. Thwaites and Vikander do their best with essentially thin characters, but they never rise to anything more than supporting characters, despite the narrative's attempts to make them its focal point. Still, with great picture, fantastic sound, and a nice commentary, 'Son of a Gun' is recommended.

Sale Price 14.99
List Price 19.99
Buy Now
3rd Party 5.65
In Stock.
See what people are saying about this story or others
See Comments in Forum
Previous Next
Pre-Orders
Tomorrow's latest releases