The Story of Adele H

The most difficult obstacle set before 'The Story of Adèle H.' is the challenge of making a tale of obsession and unrequited love into dramatic entertainment. Stunningly, French New Wave director François Truffaut ('Jules and Jim,' 'The 400 Blows,' 'Day for Night') does precisely that, from a script that took him several years to complete. And the magnificent way he accomplishes this is a simplistic approach to the camerawork which nonetheless feels marvelously complicated in its execution. Truffaut introduces the radiantly charming Adèle as a stranger and foreigner to both the audience and the country, just stepping foot off the long voyage from France to Nova Scotia, Canada. Going by the name Lewly, the young beauty quickly tells strangers of the reasons for her arrival alone, stories about a young Lieutenant Albert Pinson and her search to locate his whereabouts. But with each telling, the story dramatically altered, quickly intriguing our curiosity because the one common theme between each version is the false promise of matrimony.

By the time we slowly realize the grave truth of the matter, Truffaut has viewers hooked and invested to follow this unreliable narrator. She becomes the most fascinating object on the screen. While other characters, primarily the gentle bookshop owner Mr. Whistler (Joseph Blatchley) and the sympathetic boarding house landlord Mrs. Saunders (Sylvia Marriott), trust the woman's accounts of reality, the audience is privy to something more sinister lurking beneath, listening to one lie after another told with charming conviction. When Pinson (a cold, stony Bruce Robinson) finally pays her a visit after several letters sadly begging for his presence, we at last understand the gravity of the situation. Adèle (a dazzling and phenomenal Isabelle Adjani) is a poor misguided soul chasing a love that does not return the same level of affection if any at all. The meeting of the two is deliberately indecisive, as in emotionally uncertain, ranging from typical sentimentalism to near scary with threats of slander, building tension. But altogether, the entire confrontation is continuously plaintive and pitiful. 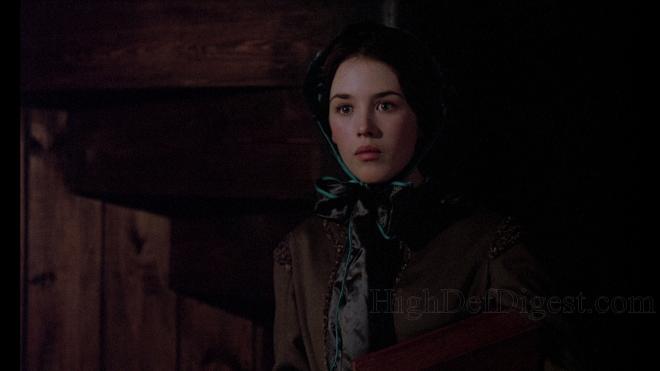 For those already familiar with Adèle Hugo, the youngest daughter of beloved French novelist Victor Hugo, and the history of the world's most famous family at the time, the events portrayed in the film are probably well known. But even so, Truffaut manages to surprise with each scene after the next and with Adèle's every pitiable attempt to force a man into loving her, keeping his audience devoted in witnessing a woman's unbearably tragic downward spiral into self-destruction. Enormous credit also goes to Adjani's remarkable performance of a woman who, in real life, suffered from schizophrenia and a delusional disorder known as erotomania, a condition where the sufferer is convinced the person of their affection secretly communicates a declaration of love. (Think John Hinckley, Jr. for a better appreciation of the condition's seriousness.) Adjani possesses an astonishing command of the camera, a presence that demands to be noticed as the center of attention. And she uses that talent to make viewers not pity her as much as understand and sympathize with her because many of us have been on the receiving end such love affairs.

In 'The Story of Adèle H.,' Truffaut captivates the imagination with resplendent skill and craftsmanship while Adjani hypnotizes our gaze and refuses to let us look away. We are just as fascinated with Adèle as she is of Pinson, developing in us a kind of obsession for the character, to follow her and be where she is at all times from the comfort and distance of a camera lens similar to her hiding behind walls, the corners of buildings and rocks. It's an extraordinary portrait of romance and passion that unravels into madness, yet, thanks to Truffaut's artistry behind the camera, it is a tale told with such lyrical, elegiac splendor that we become immersed in Adèle's delusion, almost wanting her to win Pinson over but also feeling mortified for her. One of the film's most poetic, poignantly bitter moments is our heroine embarrassing herself again with undying avowals of love while walking in a creepy cemetery, circling various tombstones in a haunting fit of irony. As I've stated in another film review also about mental illness, there is a strange beauty in the melancholy and tragedy of self-destructive behavior, and Adèle Hugo goes down in history as the mother of that misfortune.

François Truffaut's 'The Story of Adèle H.' comes to Blu-ray as a Limited Edition release courtesy of Twilight Time. The Region Free, BD50 disc is housed in the standard clear case accompanied by an eight-page booklet with photos and a thoughtful essay written by screenwriter Julie Kirgo. At startup, the disc goes straight to a static menu with the usual options.

The romantic tragedy arrives on Blu-ray with a lovely high-def transfer from the best available elements, showing the source to be in excellent condition. The 1080p/AVC MPEG-4 encode comes with an ultra-fine layer of grain, providing the presentation with a gorgeous film-like quality that stays true to the cinematography of Nestor Almendros.

There are a good number of sequences which are poorly resolved and noticeably blurry, but they are more the result of age and the photography than a fault with the transfer. On the bright side, the 1.66:1 image displays sharp details for most of the film's runtime, exposing every fine line in the wood structure of houses and the texture of fabrics in the costuming, and facial complexions appear natural and revealing. Contrast can seem a tad hot in some spots, creating some negligible posterization, but it's well balanced for the most part while black levels remain true and accurate. For three-fourths of the film, colors are somewhat subdued and restrained, creating a somber feel, but in the last quarter of the tale, the palette is suddenly bold and energetic.

On the audio side, the DTS-HD Master Audio mono soundtrack comes with several positives worth admiring, but the original design nonetheless leaves for much to be desired.

Of course, this being a character-driven film, one can't really expect much, as it still does precisely what it is set out to do — clean, precise vocals so that every word and conversation is well-head with excellent clarity. Isabelle Adjani, in particular, is all the more remarkable because we can hear and appreciate every inflection and tonal change in the actress's performance, making her downward spiral all the more heartbreaking. Despite being restrained to one channel, the lossless mix never feels limited, delivering a welcomed and engaging sense of presence with adequate bass to the music. The mid-range is also clean, with great distinction and separation of the finer details throughout.

The only issue worth noting is more due to the original recording than with any shortcoming in the codec. The entire presentation is just not very dynamic or impressive, often feeling flat and uniform. Background activity is a bit sporadic, and for much of the time, the film is rather silent and dry. Nevertheless, the high-rez track is sufficient and satisfactory.

In 'The Story of Adèle H.,' François Truffaut captivates the imagination with resplendent skill and lyrical craftsmanship with the true, tragic tale of Adèle Hugo, youngest daughter of French novelist Victor Hugo. With a remarkable performance from Isabelle Adjani, the period piece hypnotizes our gaze and refuses to let us look away as audiences witness a woman's delusions of love spiral her downward into self-destruction. The Blu-ray from Twilight Time arrives with a strong audio and video presentation though it's not to the caliber of other releases from the same period. Lacking any worthwhile bonus material, the overall package is only likely to attract the attention of cinephiles and fans of the New Wave director.