What happens when a young woman with Borderline Personality Disorder wins the lottery? In the case of Alice Klieg (Kristen Wiig), she quits her psychiatric meds and buys her own talk show. Inspired by the immortal Oprah, she broadcasts her dirty laundry as both a form of exhibitionism and a platform to share her peculiar views on everything from nutrition to relationships to neutering pets. Also starring Wes Bentley, James Marsden, Tim Robbins, Joan Cusack, Jennifer Jason Leigh and Linda Cardellini.

A thick air of sadness sets in right from the start of 'Welcome to Me,' a shockingly funny black comedy from Shira Piven, whose only other notable credit is the micro-budgeted but better forgotten 'Fully Loaded.' The film opens with the infomercial for the unnerving mechanical parakeet which Stephen Colbert once joked as the perfect battery-powered pet for lonely people. Without cutting, the camera slowly pulls back and pans right to our protagonist just waking up at twelve in the afternoon, leading viewers to assume the television has been on all night. While pulling the curtains open, the camera pans left to scan a tightly organized living space with a wall covered in VHS tapes and swan figurines. After dressing in a nice red dress, the woman sits down in front of that same television set to watch a recording of an Oprah Winfrey episode, which she recites as if it were an inspirational prayer. A TV personality, to her, is an evangelist delivering a stirring sermon.

The woman is Alice Krieg, played to memorable perfection by Kristen Wiig, and this is her morning routine, a ritual she performs daily for commencing her day with a cheerful, positive zest in her step. Contrary to what the character is feeling, however, there is an underlying vibe of uneasiness and an aura of discontent, which carries through the rest of the film. Piven quickly offsets this with an exterior scene of Alice walking down the street and trying to fix an inflatable airdancer while the snazzy musical number "Happy Talk" by Muriel Smith plays in the background. It's a delightfully funny moment that deliberately breaks from that earlier feeling. It not only reminds audiences they're watching a comedy, but it also provides a deeper understanding of the single divorced woman, who for the last several years has been living on SSI benefits and recently decided to stop taking medication for her borderline personality disorder. Alice is a confident person and wants to share that mentality with others.

By this point, readers are probably wondering why I'm spending so much time on the first five minutes of the movie. Well, the reason is that there's a great deal going on — significant, potent ideas we don't realize or appreciate until the end, only after we think back and reflect on them for a bit. Sadly, Piven doesn't sustain the same level of creativity, but these opening moments are beautifully orchestrated and effective, deserving of some small analysis. The Perfect Polly Pet commercial is frankly an artificial animal turned into a consumer product, a facsimile of life that somehow, according to the commercial, brings joy and happiness to the pretend families that were apparently lacking it. Our eccentric but sympathetic protagonist gleans life lessons and inspiration from a talk show host without considering it is all scripted, a faux reality turned to entertainment spectacle. The show tune from the Rodgers & Hammerstein musical South Pacific is today somewhat controversial in spite of its joyfully cheery melody, and the lyrics speak volumes to the plot's overall theme ("If you don't talk happy/And you never have a dream/Then you'll never have a dream come true"). 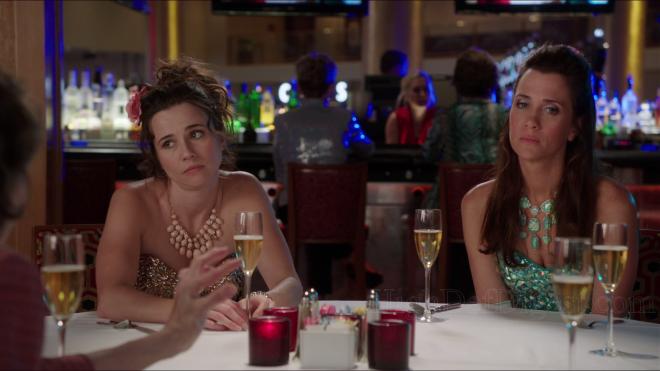 Understanding that this is her state of mind and viewpoint, it is this attitude that enables her to boldly, almost forcefully, take over a local TV station during a live infomercial hosted by Gabe Ruskin (Wes Bentley). Taking her condition into consideration, Alice acts impulsively, angers easily and is oblivious to social boundaries, making it easy for her to assume the role of host and start talking about masturbation as a sedative. Again, the comedy and laughs come from the shock, but there's also a layer of sadness lurking beneath all the humor. Alice is a very sad, lonely woman who masks that pain to the point of living in denial of it through her rituals and clichéd affirmations about maintaining a positive attitude. After winning an $86 million lottery jackpot, she pays the station to produce a show based on her and whatever random idea she has that week. To the shock of Gabe, program director Dawn Hurley (Joan Cusack) and producer Deb Moseley (Jennifer Jason Leigh), owner and studio head Rich (James Marsden) accepts the money and gives her what she wants.

It's at this point 'Welcome to Me' is arguably at its most audacious and really pushing the black part of comedy, almost morbidly turning a woman's illness, someone who is clearly in need of help, into entertainment. Alice's best and only friend, Gina Selway (Linda Cardellini), tries to be both supportive and caring to her needs, but she knows this a battle she can't win. This may be the film's darkest, even problematic aspect, but it's also the most poignant and pregnant. Piven direction is at times pedestrian, Eliot Laurence's script somewhat erratic and the editing distractingly choppy, but Alice's show speaks to something deeper about society as a whole. She genuinely believes her life is fascinating, the random ideas that pop into her head are interesting and insightful, and that her perceived traumatic memories make for good television. In all honesty, it's really not all that different from our compulsive use of social media outlets.

We possess a desire to feel important, noticed and heard, and modern technology has allowed to feed that yearning near the point of narcissism. Reality television, where the personal, once private problems which sometimes require psychological help has become popular programming, is a clear example of this unfortunate epidemic. Despite several faults in her style, Piven at least manages to balance the comedy and sadness effectively well, making us laugh while also pitying Alice's slow self-destructive chaos. There is a mysterious beauty to the melancholy and in the tragedy of our postmodern condition, which tends to appear pathologically apathetic. 'Welcome to Me' is this generation's 'Network,' a story exploring similar concerns from the opposite, far end of what Alejandro González Iñárritu did in 'Birdman,' by which I mean struggling with wanting to feel relevant and living a life of significance.

Alchemy Entertainment (formerly known as Millennium Entertainment) brings 'Welcome to Me' to Blu-ray on a Region A locked, BD25 disc housed a standard blue keepcase with a shiny slipcover. At startup, viewers can skip several previews to a static menu with music.

The black comedy debuts on the small screen with a great-looking 1080p/AVC MPEG-4 encode. There are several moments where the picture really shines, mostly during interior shots and clips from Alice's TV show. These segments come with sharply defined lines in hair and clothing, and the little tiny objects scattered throughout the apartment are plainly visible. Facial complexions appear natural with discernable wrinkles and pores. The color palette is also bold and richly saturated, especially the vibrant primaries which make the presentation pop.

However, many of these same sequences show a slightly weak contrast levels, making much of the video a tad on the dull, flat side. Exterior shots are particularly noteworthy where the sun loses a good deal of its luster and the overall scene seems oddly overcast. This is also where the picture suddenly goes softer compared to the rest. Blacks are accurate and nicely rendered for the most part, but they also fall on the lower end of the grayscale, making much of the 1.78:1 image seem flat and uninteresting.

Complementing the video every step is a strong and generally satisfying Dolby TrueHD soundtrack that does the film justice, but it's not the sort to flex any system's audio muscles. Being a dialogue and character driven film, the track is understandably a front-heavy presentation with a couple scattered moments in the surrounds, mostly thanks to the music and song selections, which are employed only to further widen the soundfield.

Nevertheless, imaging is appreciably expansive with lots of off-screen activity that's convincing and excellent channel separation. Although the design doesn't exhibit a great deal of range, the lossless mix is still pleasantly dynamic with distinct clarity and detail between various frequencies. This is most apparent and best estimated during the several song selections with music spreading across the entire soundstage while dialogue remains precise and well-prioritized throughout. During those same songs, low bass is punchy and effective, delivering a nice, highly-responsive presence that adds weight to the entire soundtrack.

With a remarkable performance from Kristen Wiig, 'Welcome to Me' is a wickedly hilarious comedy about our need to feel relevant and significant. Despite several faults, director Shira Piven manages to balance the comedy and sadness effectively, making us laugh while also pitying the main character's slow self-destructive chaos. The Blu-ray arrives with an excellent audio and video presentation but a weak set of supplements, making the overall package a great rental for the curious.

Sale Price 8
List Price 24.99
Buy Now
3rd Party 4
In Stock.
See what people are saying about this story or others
See Comments in Forum
Previous Next
Pre-Orders
Tomorrow's latest releases