Steven Spielberg directs this tense and controversial thriller, following the actions of a team of Mossad agents dispatched by the Israeli government to seek revenge against the Palestinian terrorist organization that funded and carried out the assassinations of eleven Israeli athletes during the 1972 Munich Olympics. In the days after the assassinations, young and enthusiastic Mossad operative Avner (Eric Bana) is asked by President Golda Meir to lead Israel's response. With the help of his handler Ephraim, Avner assembles a team, including bomb expert Robert (Mathieu Kassovitz), experienced sweeper Carl, unpredictable Steve (Daniel Craig), and dependable Hans. Plugging itself into Europe's terrorist network, the team operates undercover and relies on information provided by the mysterious 'Le Group', headed by the avuncular Papa. As the team assassinates its targets, using methods that range from sophisticated explosives to up-close shootings, Avner and the others begin to question the morality of their actions, and whether vengeance can ever be a just motive. As Avner starts to miss his wife Daphna, the mission takes a deadly turn when the Mossad squad is itself targeted, and Avner finds himself becoming increasingly paranoid and suspicious. Starring : Eric Bana, Daniel Craig, Marie-Josée Croze, Ciarán Hinds, and Mathieu Kassovitz.

A provocative, tension-filled study of seemingly justified revenge, 'Munich' is a masterful display of craft, artistry, and ingenuity. Mesmerizing audiences from its opening segments, depicting the 1972 Summer Olympics massacre, the political thriller seamlessly blends history and fact with fiction and spectacle in cunningly stylish fashion. Depicting the tragic events, in which eleven Israeli athletes were killed by a Palestinian terrorist organization, eyes are glued to scenes of worldwide reactions as the incident plays out live on television, only to end in catastrophe. Before delving into the moral quandary of vengeance and the price paid by those obsessively seeking it, the opening sequence serves as a reminder to viewers that the surviving families suffer and that in the end, even when hopes are high, no one wins.

Adapted from George Jonas's 1984 book Vengeance, the screenyplay by Eric Roth ('Forrest Gump,' 'The Insider') and award-winning playwright Tony Kushner (Angels in America, 'Lincoln'), follows a five-man squad tasked with locating and assassinating the 11 terrorists who allegedly orchestrated the massacre. Under the authorization of Israeli Prime Minister Golda Meir (Lynn Cohen) in what is now referred to as Operation Wrath of God, Israel charges team leader Avner Kaufman (superbly portrayed by Eric Bana) with the undertaking as a means of demonstrating to the world the still relatively-young nation can and will retaliate with force. Intriguingly, the plot seeds its central theme in these moments with discussions about family, logically justifying the covert operation and its significance as an act of protecting one's home. In fact, it's the common thread piecing the 164-min saga together, even amongst perceived enemies. 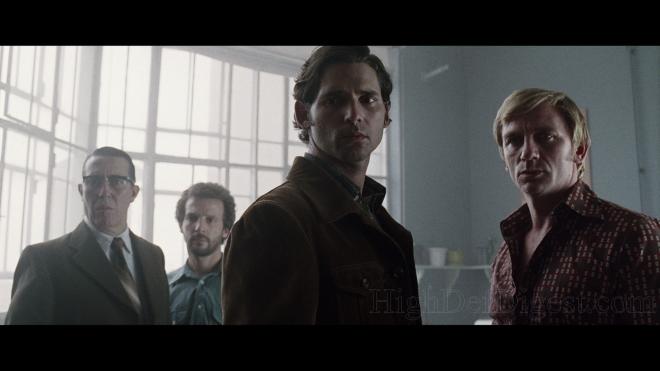 For Avner, a fictional character based on real-life Mossad agent Yuval Aviv and portrayed with touching depth by Bana, the issue of family is most immediate because the mission asks the soldier to leave his seventh-month pregnant wife (Ayelet Zurer) and miss the first-year of his child's life. It's a request which proves much too daunting on him since with every kill, he notably loses a part of himself for a cause that he eventually begins to call into question. Meeting with his team, Steve (Daniel Craig), Robert (Mathieu Kassovitz), Carl (Ciarán Hinds) and Hans (Hanns Zischler), for the first time, Avner makes them sit at the table for a dinner where the men schmooze like a family. Later, the concern over familial bonds is a matter of discussion for informants Louis (Mathieu Amalric) and Papa (Michael Lonsdale), who have turned government intelligence into a literal family business. And in one the most poignant scenes, Avner tensely deliberates with a PLO member (Omar Metwally) on the need for a country and land on which to build a home and family.

That particular conversation can be argued as the major turning point in 'Munich,' an exchange of ideas significantly pertinent to our protagonist as the operation begins to take a serious toll on him. Director Steven Spielberg carefully manages the topic and the interchange with steady, skillful confidence, not favoring one side over the other as much as simply making known that revenge is born from a perceived wrong and only succeeds to rationalize further acts of violent retaliation. The master filmmaker probes this ethical dilemma with an earnest, purposeful eye on how vengeance eats away at the soul along with one's sense of justice and morality. With long-time collaborator and cinematographer Janusz Kaminski , Spielberg keeps tensions high with a camera that's continually moving, making the political thriller an anxious, exhilarating visual feast that engages audiences on the virtues of vengeance right up to the point that it fades to black with a final image of the Twin Towers.

Universal Studios Home Entertainment brings Steven Spielberg's 'Munich' to Blu-ray on a Region Free, BD50 disc housed inside a blue, eco-elite case. At startup, the disc goes straight to a static screen with the usual menu options along the left side and music playing in the background. Currently, the Blu-ray is available as a limited-time retail exclusive at Best Buy, but will soon be sold wide on May 5th by all retailers.

But in spite of these innovative choices, the high-def presentation, which for all intents and purposes probably comes from a new master of the original elements, is a sight to behold. Every object in the distance and piece of furniture is detailed, and individual lines in clothing and the sides of walls are crisp and fine. Facial complexions are accurate and healthy with lifelike textures, exposing pores and minor blemishes in each cast member. Inky rich blacks wash over the rest of the picture, providing the 2.35:1 image with a lovely cinematic quality and excellent dimensionality. Primaries are very well-saturated, except when deliberately subdued, and secondary hues are cleanly rendered, giving the video a nice pop.

While not at the same reference quality as the video, the DTS-HD Master Audio soundtrack is nonetheless the perfect complement, generating an awesomely engaging environment that's satisfyingly immersive.

Rear activity delivers very subtle ambient effects that are discrete and convincing, like city traffic noise or the sounds of local wildlife. Action scenes, of course, offer a good deal more in terms of commotion and envelopment, as debris scatters everywhere and bullets fly overhead into the back. The front soundstage exhibits a crisp, detailed mid-range with excellent separation and distinction in the action and John Williams's score, and movement between the channels is fluid. The low-end is appreciably robust and responsive with a couple moments that dig into the lower depths and shake the entire room. With precise, distinct dialogue in the center, the lossless mix is sure to please audiophiles and fans.

'Munich' is a masterful display of craft, artistry, and ingenuity from director Steven Spielberg. Adapted from George Jonas's 1984 book, the film delves into the moral quandary of vengeance and the price paid by those obsessively seeking it while Spielberg keeps tensions high with a camera that's continuously moving. The Blu-ray arrives with stunning, reference-quality video and an outstanding audio presentation. The whole thing is topped off with a nice collection of supplements, making the overall package recommended.

Sale Price 14.99
Buy Now
3rd Party 5.83
In Stock.
See what people are saying about this story or others
See Comments in Forum
Previous Next
Pre-Orders
Tomorrow's latest releases