After a two-year hiatus, Mike Davis (Burt Lancaster) returns to the same African city where he was tortured and left for dead at the hands of a sadistic Police Commandant (Paul Henreid). Originally innocent of all charges, Mike is back to claim the diamonds he had supposedly stolen two years ago. He enlists the help of an alcoholic stranger (Peter Lorre) and the doctor (Sam Jaffe), who had helped him back to health. The diamond syndicate head (Claude Rains) recruits a nightclub temptress Suzanne Renaud (Corinne Calvet) to seduce and betray Mike as an alternate to brute force. This suspense-noir classic was directed by William Dieterle (Dark City).

Diamonds in the desert. It's a premise pregnant with possibilities and 'Rope of Sand' gives birth to almost all of them. Such potent elements as greed, revenge, torrid romance, double-crosses, intrigue, and cruelty abound, and though the film sometimes struggles to cohesively combine them, it flaunts enough snappy dialogue, rough-and-tumble action, and spirited portrayals to wind up a highly entertaining - if ultimately ragged - exercise in macho melodrama. A strapping, glowering Burt Lancaster leads the charge, but with names like Paul Henreid, Claude Rains, and Peter Lorre also anchored above the title, it's hard not to think 'Casablanca.' And as this dusty and lusty tale progresses, the not-so-coincidental similarities between the two films multiply.

The story transpires in the desolate locale of Diamantstad, South Africa, a diamond-rich area that's encircled by a rope of desert sand, making access difficult and treacherous. The region is controlled by a large corporation and patrolled by the sadistic Commandant Paul Vogel (Henreid), who two years earlier almost beat hunting guide Mike Davis (Lancaster) to death when he refused to reveal the location of a fertile cache of jewels he and a client discovered when they brazenly ventured into a restricted zone. Now, Mike's back to claim the diamonds and exact revenge on Vogel, who - along with everyone else in town - tries to manipulate him into revealing the hidden location of the gems. Also in the hunt is urbane and effete diamond executive Arthur Martingale (Rains), who hires temptress Suzanne Renaud (Corinne Calvet) to seduce Mike and gain his trust. Suzanne, however, quickly falls for her mark, and as the plot thickens so do tensions between all the involved parties, which lead to an action-packed, over-the-top climax.

Like 'Casablanca,' 'Rope of Sand' unites a group of disparate souls in an exotic, dead-end locale, and they all congregate in a smoke-filled bar that's a shady knock-off of Rick's Café Américain. Yet instead of letters of transit, the characters desperately covet the location of the diamonds, which will buy their ticket out of Diamantstad and hopefully secure a more gratifying life. Although Henreid deliciously trades his Victor Laszlo stoicism and freedom fighting for Vogel's corrupt, vindictive villainy, both Rains and Lorre play parts that recall their iconic turns in 'Casablanca.' The dry wit and sophistication that define Rains' Captain Renault is enhanced in 'Rope of Sand' almost to the point of camp, but the actor delivers each line with such impeccable timing, pitch-perfect inflection, and melodic lilt, we hardly care. One of the great character actors of his generation, Rains is always a riveting presence and manages to elevate subpar material like few performers can. Lorre, who plays the lowlife Ugarte in 'Casablanca,' portrays an even more degenerate bum here, a shifty guy appropriately called Toady, who slithers around the bar trying to ingratiate himself into Mike's good graces in the hope of securing a cut of the bounty. In another intriguing "coincidence," 'Rope of Sand' is produced by Hal B. Wallis, who produced 'Casablanca' as well, and bitterly left Warner Brothers after studio chief Jack L. Warner rushed to the stage to accept the Best Picture Oscar for the film, stealing all the credit and robbing Wallis of a well-earned moment in the spotlight.

Lancaster flexes his muscles, sulks, and flashes his trademark toothy grin, but he's no match for the seasoned veterans who upstage him in every scene. Yet he holds his own better than the novice Calvet, whose smoldering presence stokes the senses, but whose acting leaves a lot to be desired. In her American debut, the French actress struggles with her English and lacks the magnetism and vulnerability of a more polished performer. (Because the movie so heavily resembles 'Casablanca,' it's tough not to keep wishing she was Ingrid Bergman.) Still, she creates good chemistry with all of the film's myriad men, especially Lancaster, who seems to put her at ease.

'Rope of Sand' fits snugly within the framework of film noir, and though its story strains credulity, the non-stop action, brisk exchanges, and scenery chewing antics of the cast easily keep viewers engaged. William Dieterle's assured direction lends the material a robust flair, and the arid atmosphere provides a welcome dose of escapism. (Who cares if Yuma, Arizona doubles for the South African desert?) 'Rope of Sand' may not be particularly memorable, but it's a good popcorn melodrama sure to please any classic movie aficionado. 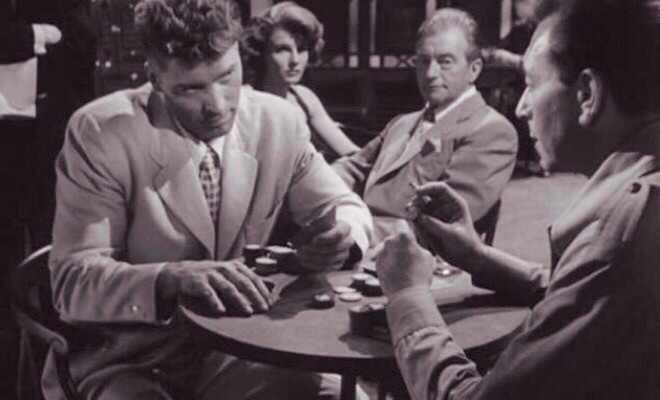 'Rope of Sand' arrives on Blu-ray packaged in a standard case. Video codec is 1080p/AVC MPEG-4 and audio is DTS-HD Master Audio 1.0. Once the disc is inserted into the player, the full-motion menu with music immediately pops up; no previews or promos precede it.

A mixed bag aptly describes this 1080p/AVC MPEG-4 transfer from Olive Films. Moments of exceptional contrast and clarity are offset by ragged stretches beset by nicks, marks, and white blotches. Grain levels fluctuate as well, but strong gray scale variance allows such standard noir elements as swirling cigarette smoke and deep shadows to shine. Black levels are lusciously rich and the white desert sand is well defined. Close-ups vary in sharpness, but most exude a glamorous sheen that highlights Lancaster's chiseled features, Calvert's soft allure, and the weathered visages of Henreid, Rains, and Lorre. Incidences of crush are few, and no noise creeps into the picture. Occasionally, this transfer reaches great heights - one of the opening shots, which captures a jeep barreling over the crest of a sand dune, is so crisp and vivid it almost adopts a 3-D quality - but its inherent inconsistency tempers such dazzling moments.

A fair amount of pops and crackles hamper the DTS-HD Master Audio 1.0 track, which otherwise sounds quite good. A wide dynamic scale keeps distortion at bay most of the time, even during the most bombastic bars of Franz Waxman's melodramatic score, which enjoys fine presence and tonal depth. Calvert's extremely heavy French accent occasionally renders her dialogue unintelligible, and Henreid is sometimes tough to understand, too, but the other actors speak clearly (especially Rains, whose mellifluous tones are music to the ears) and their exchanges are easy to comprehend. Of course, a little care and clean-up would have improved the quality of this track, but it's quite serviceable as is and its defects don't detract much from the on-screen action.

There are no extras whatsoever, not even a trailer.

'Rope of Sand' is as taut and gritty as the two words in its title. Though at times this mixture of intrigue, romance, and suspense too closely mirrors another, far better film ('Casablanca'), William Dieterle's tough tale of insatiable greed and ruthless desire holds our interest from start to finish. A muscular portrayal from a young Burt Lancaster and colorful, scenery-chewing support from Paul Henreid, Claude Rains, and Peter Lorre make the material seem much better than it is and substantially raise the entertainment quotient of this second-tier film noir. Olive's Blu-ray presentation features a spotty video transfer, average audio, and no supplements, but classic film fans will still find this slick, exotic thriller worth a look.

Sale Price 19.99
List Price 29.95
Buy Now
3rd Party 14.95
In Stock.
See what people are saying about this story or others
See Comments in Forum
Previous Next
Pre-Orders
Tomorrow's latest releases