In 1936, producer David O. Selznick took a huge risk when he bought the rights to a 1,037-page unpublished novel about the Civil War South called 'Gone With the Wind.' Many in the industry thought he was crazy, but it proved to be one of the most successful gambles in Hollywood history, as Selznick parlayed the book's enormous popularity into an Oscar-winning epic that still thrills audiences today. Three decades later, producer-director Otto Preminger followed suit, hoping to equal, if not one-up, Selznick by optioning a 1,046-page unpublished novel about the South just after World War II called 'Hurry Sundown.' Preminger, however, never hit pay dirt. K.B. Gilden's sordid saga of abject greed, desire, familial strife, and racial tensions failed to wow the critics or captivate the public in the same manner as Margaret Mitchell's magnum opus, and the apathy forced Preminger to scale back his overblown plans for the project, reducing an envisioned four-hour adaptation by almost half. Yet despite a strong cast and plenty of narrative conflict and titillation, 'Hurry Sundown' remains - like its source material - decidedly mediocre. It often piques our interest (few salacious yarns don't), but rarely captures our fancy.

When avaricious Georgia landowner Henry Warren (Michael Caine) and his sex-kitten wife Julie (Jane Fonda) align themselves with a mechanized farming corporation to further feed their hefty coffers, they must convince Henry's cousin, recently returned war vet Rad McDowell (John Phillip Law), and African-American sharecropper Reeve Scott (Robert Hooks), whose mother (Beah Richards) was Julie's mammy, to sell their respective plots of land to seal the deal. Rad and Reeve defiantly decline the offer and instead, in an audacious move, join forces in an attempt to develop the land themselves, dig their way out of poverty, and thumb their collective noses at the grasping, selfish Warrens. Their partnership enrages Henry, who seeks to sabotage their efforts by wrangling Reeve's land away from him...with the help of a bigoted county judge (Burgess Meredith) who wants to keep blacks in their subjugated place. Manipulations, betrayals, and revelations ensue while the conflict fans the fires of racial unrest.

As a civil rights film, 'Hurry Sundown' is tepid at best. Though it makes some fine points about equality and harmony, the screenplay by Horton Foote and Thomas C. Ryan doesn't push the envelope in the same manner as 'In the Heat of the Night,' which was released the same year. Instead, it focuses its gaze on interpersonal relations, parental neglect and ineptitude (Henry and Julie have a disturbed six-year-old son who doesn't speak and cries incessantly, due to a shocking infant injury), and the constant scheming of the ruthless Warrens. In essence, it's a big, bloated, silly soap opera that lacks the elegance and intellect of 'Gone With the Wind,' and is distinguished by shameless - yet strangely riveting - overacting by an accomplished cast that really should know better. In addition to Caine, Fonda, and Meredith, Diahann Carroll, Faye Dunaway (in her film debut), George Kennedy, Jim Backus, and Robert Reed all put on their best (or, shall we say, most affected) Southern accents and chew the scenery with relish. Meredith, who at the same time was portraying the villainous Penguin on the campy 'Batman' TV series, especially goes over the top, milking every drawling syllable for all it's worth.

'Hurry Sundown' was the first film with black actors in lead roles to be shot completely in the South, an honorable distinction that carried with it a fair amount of off-set strife, due to the depiction of a biracial friendship between two men. As a result, a couple of actors received death threats, the tires on a few production vehicles were slashed, and armed state troopers were called in to protect the cast at the company's hotel. Preminger, whose reputation as a bullying tyrant was well-known, consistently harassed his actors, causing Caine to quip to a reporter, "He's only happy when everyone else is miserable." The young Dunaway, who files one of the film's best and most natural portrayals, was one of Preminger's prime targets, and after a particularly ugly encounter, she decided to sue the director to gain release from the five-picture contract she signed with him.

Caine does a good job transforming his Cockney speech patterns into a Southern dialect, but his character is unrelentingly unsympathetic and often insufferable. Still, he creates good chemistry with Fonda, who's fun to watch as she channels her inner Scarlett O'Hara. In one particularly racy scene, a drunken Fonda slinks around like a cat in heat, sucking ever so suggestively on a saxophone mouthpiece in an effort to stoke the passions of her sullen husband. It's a little shocking, even by today's jaded standards, but such blatant titillation is right up Preminger's alley. Though his lackluster direction doesn't do the script any favors, Preminger manages to keep the story moving, making the 147-minute running time fly by.

But what do we gain from it? Unfortunately, not much.  'Hurry Sundown' lacks both style and substance, and often keeps important issues at arm's length. Several relevant themes are addressed, but they're too mired in melodrama to come to fruition. And after almost two-and-a-half hours, the abrupt, unsatisfying ending leaves a sour taste in our mouths. Yes, the film shares many similarities with 'Gone With the Wind,' especially the viewpoint that "land lasts," but while the red earth of Tara resonates, the Georgia of 'Hurry Sundown,' according to Carroll's character, is far from The Promised Land. After the success of the gritty and gripping 'Bunny Lake Is Missing,' Preminger hit the skids with this tawdry tale, and never quite regained his footing. 'Hurry Sundown,' like a glorious sunset, shows flashes of Preminger's artistry, but sadly, the beauty is only fleeting, In the end, this blustery display of empty bravado is much ado about very, very little. 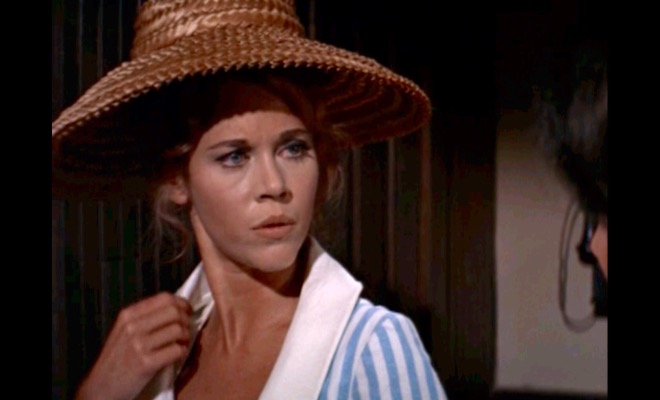 'Hurry Sundown' arrives on Blu-ray packaged in a standard case. Video codec is 1080p/AVC MPEG-4 and audio is DTS-HD Master Audio 2.0. Once the disc is inserted into the player, the full-motion menu with music immediately pops up; no previews or promos precede it.

Like many Olive releases, the transfer for 'Hurry Sundown' is good, but not great. Consistent, but never excessive, speckling occurs throughout the 1080p/AVC MPEG-4 rendering, with a few white blotches occasionally grabbing our attention. A pleasing amount of grain maintains the film-like feel and lends the period rural tale appropriate texture, and excellent clarity and contrast help the picture look fresh and vibrant. Though the cheap color processing hasn't held up very well over the years (some of the hues appear slightly faded), Fonda's red hair exudes a warm glow, as do the verdant greens of the Southern farmlands. Flesh tones err a bit toward the orange side, but black levels are rich and deep, shadow delineation is fine, and background elements are easy to discern. Close-ups show off facial details well, and no crush, noise, or banding occur. For an almost 50-year-old movie that's undergone no noticeable restoration, 'Hurry Sundown' pretty much meets expectations, and this watchable transfer should satisfy the film's fans.

The DTS-HD Master Audio mono track supplies adequate sound that serves the material well. All the dialogue is clear and comprehendible, and though Hugo Montenegro's robust music score lacks much fidelity or tonal depth, it still fills the room with ease. Sonic accents, such as explosions, carry a fair amount of weight, and the shrieking of the young Warren child is appropriately shrill and grating. No age-related hiss, pops, or crackles intrude, and no distortion creeps into the mix.

The disc includes zero supplements, not even a trailer.

Taking some cues from 'Gone With the Wind' and peppering its racially charged story with plenty of sex and campy melodrama, 'Hurry Sundown' aspires to epic greatness, but falls far short of its goal. Otto Preminger's spirited yet lackluster adaptation of K.B. Gilden's massive opus of Southern angst, greed, and prejudice often resembles a sordid primetime soap, and though it holds our interest, it does so against our better judgment. Olive Films' Blu-ray presentation features standard video and audio transfers and zero supplements. While a fine cast keeps its engine humming, 'Hurry Sundown' pales when compared to other Preminger films and is strictly for fans only.