A woman reports that her young daughter is missing, but there seems to be no evidence that she ever existed.

It's every parent's worst nightmare. Something we guard against every day, but something over which we don't always have control. Losing a child. One minute they're here and the next they're gone. Vanished. Without a trace. The shock is devastating, almost crippling. You want to retreat into a shell, make believe it's not true, and yet you're forced into a frantic maelstrom of questions, accusations, police inquiries, soul-searching, and incomprehensible guilt. And when the circumstances are strange and the chain of events doesn't make sense, it's even harder to get a grip on the situation and yourself.

'Bunny Lake Is Missing,' an oh-so-twisted psychological mystery that taunts and teases until the final big reveal, brilliantly captures all these emotions and adds a paranoiac creepiness to the proceedings to ramp up tension and suspense. Producer-director Otto Preminger, who's at the top of his game, instantly creates an aura of unease that ebbs, flows, and heightens as the story progresses and is beautifully framed by claustrophobic images that make us feel as trapped as the characters. Though the story doesn't quite hold together and goes off the rails a bit at the end, the film's artistry, disturbing themes, and fine performances hold us spellbound throughout. Reminiscent of 'The Innocents' (most notably at the end) and the far more ludicrous Jodie Foster vehicle from 2005, 'Flightplan' (which shamelessly borrows its plot), 'Bunny Lake Is Missing' initially preys on a universal fear, then veers off in other macabre directions to keep us in a perpetual state of discomfort.

Another in a series of visually dynamic title sequences by the great Saul Bass helps set the tone, as does the knowledge the film's title imparts. We know from the outset someone named Bunny Lake will be missing, and, most likely, she's a child, so despite a series of benign events that transpire early on, a pall of impending doom hangs over the proceedings. When we first see the harried Ann Lake (Carol Lynley), who only a few days before arrived in London to join whom we perceive to be her journalist husband Steven (Keir Dullea), she's just dropped off her four-year-old daughter, Bunny, at her new preschool. Late for her meeting with the movers at her flat, Ann asks the school cook to look after Bunny, who's up in the First Day Room awaiting assignment, until the teacher can meet her and bring her to class. The cook grudgingly agrees and Ann hurries off.

A few hours later, Ann returns to pick Bunny up, but when her daughter doesn't seem to be with her class, Ann becomes alarmed. She's told her teacher left early because of a toothache, the cook who was supposed to watch her suddenly quit in a fit of pique a couple of hours before, and no one else at the school has any recollection of ever seeing Bunny. A frantic search yields no results, and soon an angry Steven arrives and hurls charges of negligence and incompetence at the staff. The police are summoned in the form of Superintendent Newhouse (Laurence Olivier), who calmly tries to gather facts and reconstruct what happened.

Things, of course, are not as they seem. Steven, who's quite demonstrative with the waifish Ann (who herself seems quite child-like and naïve), turns out to be her brother, and he confesses to Ada Ford (Martita Hunt), the school's elderly founder, that when she was a little girl, Ann invented an imaginary playmate, whom she named Bunny, and to whom she grew abnormally attached. Since no one has ever seen Ann's daughter, including the audience, we all begin to wonder whether she really exists at all...except in the delusional mind of her "mother." Ann tries to provide proof, but without any concrete evidence, Newhouse has no leads to follow. As precious hours tick by, Ann becomes more distraught, which only solidifies the perception of her as unbalanced.

Preminger cut his directorial teeth on film noir, and 'Bunny Lake Is Missing' flaunts many of the genre's stylistic hallmarks, yet possesses a distinct 1960s vibe. (The popular rock group The Zombies even enjoys a cameo to lend the film an edgy hipness.) He also gravitated toward taboo themes, as evidenced by such previous films as 'The Man With the Golden Arm' (heroin addiction), 'The Moon Is Blue' (virginity), 'Anatomy of a Murder' (rape), 'Exodus' (interfaith romance), and 'Advise & Consent' (homosexuality). Here, there's more than a hint of incest between Steven and Ann, and there's also a lecherous landlord (played with devilish delight by Noel Coward) who crops up unexpectedly and creepily comes on to Ann when she's most vulnerable. Both of these crude titillations up the mystery's ante, as does the eccentric Ada, who makes the matter-of-fact pronouncement, "For the most part, parents are a very bad lot."

Hunt, who plays Ada, is best known for her iconic portrayal of the reclusive Miss Havisham in David Lean's classic adaptation of Charles Dickens' 'Great Expectations,' and her character and performance here somewhat echo that famous role. Interestingly, Finlay Currie, whose memorable turn as the benevolent convict Magwitch in the same movie rivals Hunt's, also appears here in his final feature film in an equally quirky part as a kindly doll surgeon whose eerie shop (see photo below) may hold an essential clue to Bunny's disappearance. Several other British character actors add spice and intrigue to the picture, aiding Preminger's effort to keep everything just a bit off kilter.

Olivier is subtle, controlled, and very effective as Newhouse. It's not a showy role, and the world's greatest actor (as he was known at the time) doesn't try to make it one. Always fascinating to watch, Olivier helps legitimize what otherwise might have been regarded as a cheap, manipulative thriller, and his contributions cannot be underestimated. Lynley brings a heartrending naturalness to Ann (all parents can sympathize with her), but Dullea comes across as too studied and a little robotic, making one think he wandered in from 'Village of the Damned.'

'Bunny Lake Is Missing' just misses making its mark, but remains a nifty, unsettling, and consistently engrossing mystery. It also stands as Preminger's last truly successful production. The great director would go on to make several more movies, but none would capture the public's fancy with the same fervor. Though its plot may be a tad tired, its superior presentation elevates the story, draws us in, and keeps us transfixed. And you can't ask for much more from a thriller. 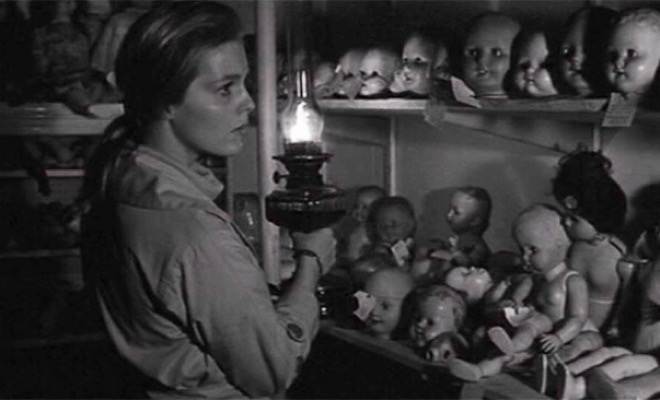 'Bunny Lake Is Missing' arrives on Blu-ray in a limited to 3,000 edition packaged in a standard case. An eight-page booklet featuring an essay by Twilight Time's reisdent film historian Julie Kirgo, several black-and-white scene stills, and a reproduction of the movie's poster art is tucked inside the front cover. Video codec is 1080p/AVC MPEG-4 and audio is DTS-HD Master Audio 1.0. Once the disc is inserted into the player, the static menu without music immediately pops up; no previews or promos precede it.

From the opening titles onward, 'Bunny Lake Is Missing' is a visually striking film, and the 1080p/AVC MPEG-4 transfer hurls us into the action and captures all the noir-ish effects, thanks to terrific clarity and contrast. Faint grain provides essential texture that heightens the aura of dread that drenches the proceedings, and aside from a stray vertical line, no nicks or scratches dot the pristine source material. Excellent gray scale variance adds punch to the picture, allowing background elements to pop, and rich, inky black levels lend a wonderful bite to nocturnal scenes. Shadow detail is quite good, too, and though close-ups are sparingly employed, their impact is palpable. A bit of motion blur occasionally afflicts the image, which flaunts a cold, stark look overall (that beautifully suits the material), but no noise or artifacts could be detected, and any artificial sharpening or smoothing has been delicately applied. Though not quite perfect, this is still a fine effort that should please the film's fans.

The DTS-HD Master Audio 1.0 track supplies adequate sound with a fair amount of presence and depth. All the eerie subtleties and nuances, such as footsteps, creaking doors, and shattering glass, come through cleanly, and though the understated score by Paul Glass adopts a shrill timbre at times, there's a lovely resonance to the music that complements the story's uneasy atmosphere. (Some rock tunes by The Zombies, seen performing on TV at a local pub, also come across well.) Except for a few isolated instances, all the dialogue is clear and easy to comprehend, and no distortion or surface noise creep into the mix. (An isolated audio track in DTS-HD Master Audio 2.0 also can be accessed through the disc's set-up menu.)

Tense, claustrophobic, and appropriately disturbing, 'Bunny Lake Is Missing' draws upon every parent's greatest fear as it chronicles the search for a missing child who may or may not exist. Director Otto Preminger casts a riveting spell as he fosters a delicious sense of unease and paranoia, while first-rate performances from Laurence Olivier, Carol Lynley, and a number of marvelous British character actors almost make us forgive the plot holes and overblown denouement. Twilight Time's Blu-ray presentation skimps on supplements, but the video and audio transfers honor this surprisingly effective, consistently engrossing exercise in suspense. Recommended.