Young newlyweds Paul (Harry Treadaway) and Bea (Rose Leslie) travel to a remote lake countryside for their honeymoon, where the promise of private romance awaits them. Shortly after arriving, Paul finds Bea wandering and disoriented in the middle of the night. As she becomes more distant and her behavior increasingly peculiar, Paul begins to suspect something more sinister than sleepwalking took place in the woods.

Like all the pomp and circumstance packed into the average wedding ceremony, the honeymoon, too, is laden with not only tremendous expectations, but also ritual. It is an act that was once intended to allow newlywed couples the chance to become better acquainted with one another emotionally as well as physically. The need for such a private introduction is all but behind Western cultures now, but the act of "honeymooning" still carries with it enormous significance, the weight of which is the impetus for director Leigh Janiak's superb paranoid thriller, aptly titled 'Honeymoon.'

The film stars Rose Leslie and Harry Treadaway, who will be familiar to television fans for their roles on 'Game of Thrones' and 'Penny Dreadful.' This time, however, instead of playing a feisty redheaded Wildling with a penchant for slinging arrows and telling bastards what they know (i.e., nothing) or the obsessed doctor who's harnessed the power of resurrection, the two play Bea and Paul, an ordinary American couple who fell in love and were married not long before the movie starts.

'Honeymoon' goes light on the backstory, offering scant details on Bea and Paul. The only particulars offered come from a wedding video in which the newlyweds describe their engagement – makeshift as it was – the details of which paint them as easygoing and comfortable, if not madly in love with one another. There's something off between Bea and Paul from the get-go, which may not have been intentional, but certainly helps to establish an air of benign apprehension. Soon after the wedding, the couple ventures to a secluded lake house owned by Bea's family. The apprehension shifts slightly, as Bea shows her husband around, introducing him to a side of her he clearly hasn't yet seen. And with that, Janiak begins to expose what is lying beneath the terror that has yet to even emerge: a subtle realization that despite their feelings for one another, Bea and Paul don't know one another as well as they think they do. 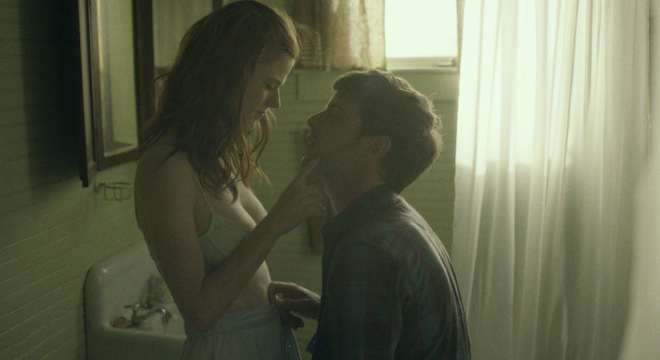 On the first night, sex becomes a playful, frenzied necessity for Paul, who embraces the role of eager newlywed, while Bea plays the coy tour guide. The sequence underlines how the couple submits to the expectations others have for a couple on their honeymoon, even as Paul and Bea slip into what is assumed to be a familiar intimacy. That intimacy is upset the next morning when Bea is taken aback by her husband’s crass, dispassionate comment about what they got up to the night before. To make things more awkward, the remark is initially misinterpreted as a desire to have children – another allusion to the blind spot in the couple’s intimacy.

The film uses the blind spots to poke holes in Bea and Paul’s nascent marriage, as well as to build a foundation of tension upon which the film’s conceit will slowly be constructed. When an early morning fishing excursion doesn’t go as planned, Paul returns to an empty lake house. After a frantic search, Bea is found wandering the woods naked and disoriented, with no recollection of how she came to be there or why.

From there, ‘Honeymoon’ descends into a paranoiac nightmare in the vein of ‘Invasion of the Body Snatchers’ or David Cronenberg’s ‘The Fly.’ As Paul grows increasingly certain the nocturnal event was something more than a mere “sleepwalking” incident, Bea begins to shut him out, physically and emotionally. The odd behavior worsens when Bea’s memory begins failing her, first with an inability to perform mundane tasks and then when she’s asked to recall specifics about her and Paul’s relationship.

Janiak shows a deft hand at establishing and maintaining the suspense within the lives of her protagonists, while the narrative takes a decidedly heightened turn toward sci-fi and horror. Balancing character with a broadening sense of dread becomes paramount as the story progresses and the truth behind Bea’s strange behavior is eventually revealed through a series of increasingly foreboding and nauseating reveals. Through it all, though, Janiak manages to keep a sense of what drives Paul and Bea, without succumbing entirely to the clichés of any genre (take your pick). That emphasis on emotion and individual character over plot and the increasingly fanciful departures taken therein afford the film a potent and grounded perspective that accentuates the terror from a personal perspective, rather than by dragging the viewer through a relentless slog of horror.

'Honeymoon' is a terrific piece of low budget horror that packs a potent atmospheric punch, but isn't afraid to lay all its cards on the table either. Solid, low-key performances by Leslie and Treadaway, coupled with the skilled direction of Janiak make for a compelling, suspenseful, and unsettling feature. 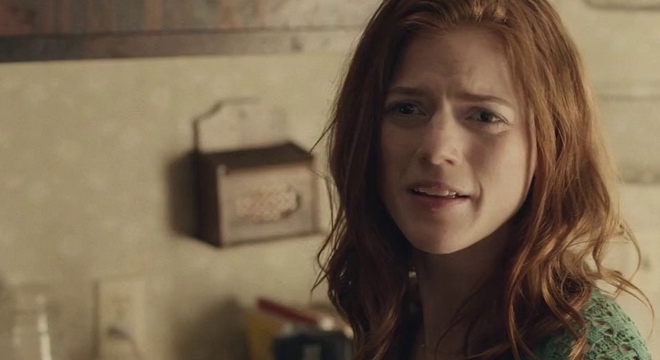 'Honeymoon' comes from Magnolia Home Entertainment as a single 25GB Blu-ray disc inside a standard eco-keepcase. The insert artwork features Treadaway and Leslie above a striking image that might be too revealing – still, it's better than the 'Under the Skin'-themed artwork floating around elsewhere. The disc will auto-play several new and updateable previews before heading to the top menu. From there, you can choose from settings, special features, or to simply watch the movie.

Obviously, being a work of genre fiction, atmosphere is a primary concern for 'Honeymoon.' The issue that results because of its visual ambiance (and perhaps the limits of the technology used to film it) is a dark, sometimes hazy image that certainly creates the appropriate tone, but occasionally loses some of its clarity and detail as a result. Certainly, there are times – like when Bea and Paul are out on the lake, or taking an afternoon stroll through the forest – when fine detail is present and clarity is at its best, but interior shots tend to carry a murkier look to them. Again, this is in service to the film itself, so, in all likelihood, such gloomy living rooms, hazy bedrooms, and dank cafes are all part and parcel to making the film work.

While the detail can be a little hit or miss, contrast and color are even throughout. Contrast remains high, presenting bright, sunny days without overcooking the white levels. Blacks are even throughout and strong during the many nighttime sequences where they need to deliver a robust, inky darkness. As it stands, the image never fails in this particular instance. Although some detail is lost during the darkest sequences, there is no trace of banding or crush on the screen. This again actually works to the film's advantage, as a crisper image would have ran the risk of being too sterile, too clean for what is a deliberately grimy film.

The overall look of the transfer is above average, but the effect it has on the film is top-notch. In other words: the movie's atmospheric intent outweighs everything else.

As with the image, the disc's DTS-HD 5.1 mix is concerned with demonstrations of atmosphere over anything else. The result is a subtle soundtrack that is mostly free from bombastic sound, but that doesn't mean it is somehow lacking. The mix makes great use of ambient noise when it needs to by delivering lapping waves on the shore, the sounds of food being prepared, or just the crackle of a fire in the outdoors. The sound design shines when it plays up the genre elements of the film, using unsettling audio cues in place of flashy special effects. The result is a far more disturbing picture that utilizes its limitations in distinct and creative ways.

Dialogue is another important factor, and it is delivered with precision. The small cast is very easy to hear and to understand, even when Heather McIntosh's score is ramping up. Although there's not much to get in the way of the dialogue, the mix sounds well balanced throughout. For the most part, the dialogue utilizes the center channel, but dialogue and sound effects are spread around at times to make the most of the multi-channel listening experience. Paul's search for Bea is a good example of this.

Despite its relative quiet, this is an impressive sounding disc that enhances the viewing and listening experience by keying in on the elements that make for an unsettling atmosphere.

Interview with Actors Rose Leslie and Harry Treadaway (HD, 9 min.) – Leslie and Treadaway offer some insight into their reaction to the script and how they prepared for their roles as newlyweds.

Interview with Director Leigh Janiak (HD, 8 min.) – Janiak goes into some detail about the writing process, the films that inspired her and co-writer Phil Graziadei, and what went into the production itself.

The Worm Behind the Scenes (HD, 2 min.) – There is a fishing scene in the film in which a worm is used as bait. This is a behind-the-scenes look at Leslie's issues with the worm.

Canoe Behind the Scenes (HD, 3 min.) – This is a quick look at how difficult it can be for an actor and a filmmaker to be out on the water.

AXS TV: A Look at 'Honeymoon' (HD, 2 min.) – Another AXS TV promo that stitches together various interviews into one quick featurette.

'Honeymoon' is an effectively unsettling, but sharp film that shows just how frightening and suspenseful films can be when they keep the revelations to a minimum and focus instead on characters worth caring about. This is a surprisingly layered film that works to generate a genuine story, set against a disturbing genre setting. Leslie and Treadaway turn in terrific performances as the young couple who're bound to discover more than they ever wanted – both about each other and what's out in the forest of their honeymoon retreat. With decent image that sacrifices clarity for atmosphere and good sound, along with some interesting interviews, 'Honeymoon' comes recommended.

Sale Price 12.99
List Price 16.98
Buy Now
3rd Party 7.95
In Stock.
See what people are saying about this story or others
See Comments in Forum
Previous Next
Pre-Orders
Tomorrow's latest releases