Some of literature's most terrifying characters, including Dr. Frankenstein, Dorian Gray, and iconic figures from the novel Dracula are lurking in the darkest corners of Victorian London. Penny Dreadful is a frightening psychological thriller that weaves together these classic horror origin stories into a new adult drama.

Despite the ensemble cast, 'Penny Dreadful' should have been called: 'Eva Green's Penny Dreadful.' Now certainly, there are a number of other well-known actors like Josh Hartnett and Timothy Dalton running around Victorian London, engaging with all sorts of ghoulish creatures rooted in 19th century literature, but it's Green who makes it all work, who makes it all worthwhile. The rest is essentially a welcome accoutrement to her outstanding, unsettling, and beguiling performance.

Created and written by John Logan (a.k.a. the guy who either writes all the screenplays to your favorite movies or works to make them better), 'Penny Dreadful' takes the worlds of Bram Stoker, Mary Shelly, and Oscar Wilde and unites them under the umbrella of a single narrative. Through this combination of inspirations, the series samples just about everything from the world's darkest, most morbid buffet, piling on its plate heaping helpings of the occult, demonic possession, vampires, werewolves and ressurection, but it also saves plenty of room for polyamory, polysexuality, British imperialism, and taxidermy – because why the hell not?

In the early going, the story revolves mostly around Sir Malcolm Murray (Dalton) and Vanessa Ives (Green), as they quest to find Murray's missing daughter Mina, who also happens to be Vanessa's oldest and dearest friend. Without much in way of explanation, they hire Ethan Chandler, an American gunslinger who tells tall tales in a traveling show by day, and drinks away his troubles by night. Chandler's willingness to put a bullet in someone – or something – without much hesitation is of great value to Ives and Murray, as they quickly introduce him to a world where monsters inhabit the shadowy recesses of dank buildings seemingly untouched for centuries. What Ethan encounters, sets off a chain of events that soon unravels the twisted histories of players who will soon find themselves entangled in the mysterious web of Ms. Ives' strange torment. 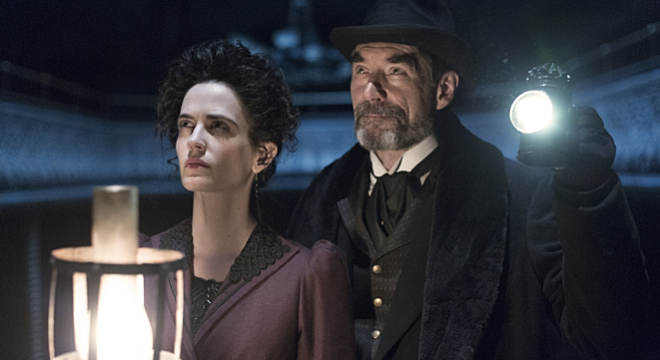 In the series premiere, 'Night Work,' the story gets off to a rousing start, one that also introduces Harry Treadway (the "They're gonna violate me with a duck foot" guy from 'The Lone Ranger') as Dr. Victor Frankenstein, in an oddly stirring moment mixing empathy and hubris as he gazes upon his creation. That moment, of course, is like everyone else on the show, revealed to have a much darker past lurking somewhere, waiting to strike – which it does, soon after, in the form of Rory Kinnear as The Ceature, a lonely, hate-filled patchwork being whose passion for the theater is only surpassed by his penchant for snapping the necks of elderly gentlemen in Frankenstein's company.

But 'Night Work' is something of a clever dupe, as 'Penny Dreadful' never really sets sail under the stiff breeze of its premiere. Instead, it becomes like the creatures Murray is hunting; it lingers in recesses, to better poke around the characters' sins and dark pasts, uncovering the truth behind their present predicaments and the terrors that lie ahead. There are episodes that feel a little like team-building, where Frankenstein, convinced to join Murray's crew, pals around in the basement with Chandler, firing off his six-shooters like naughty siblings who have momentarily eluded their father's watchful eye. And then there are episodes like 'Demimonde' that are wound so tightly in a thematic sense they have no room for anything but an exploration of character – which it certainly does when Ethan spends and evening on the town with Dorian Gray (Reeve Carney).

Because Logan's writing from episode-to-episode doesn't necessarily favor plot – most episodes are only connected by a general sense of continuity – it can, at times, feel as though 'Penny Dreadful' has lost the thread of what it was intended to be about. But that loose, casual sense of purpose can also be one of its greatest assets. One of the season's best is 'Closer Than Sisters,' a beautiful, haunting, and lurid episode that begins as a desperate, mournful love letter from Vanessa to the missing Mina, including phrases like, "It was the season of Peter's inadequate beard," and later turns into a harrowing account of Vanessa's betrayal of her friend and subsequent torment she suffered as a result. It would, without a doubt be proof positive that this is Eva Green's series, were it not for the penultimate episode, 'Possession.'

'Possession,' for its part, spans the four weeks Murray, Chandler, and Frankenstein spend battling the demon (possibly Satan himself) that has taken up residence in Vanessa's body. The episode is not merely showcase for the many talents of Eva Green, as it also affords Hartnett a few choice scenes that much suggest a greater range and intensity than we've seen from him before.

If 'Possession' is the high point, then the season finale, 'Grand Guignol' must be series' lowest. After seven episodes of questions ranging from Mina's location and the identity of Vanessa's dark stalker, to what Chandler's hiding and why Billie Piper is doing that particular accent, the finale seemingly realized it has to cram all the answers into one hour of television. The result, then, is an unfulfilling, incoherent hour that is only saved by the promise of more to come.

Still, despite its inconsistencies and its dismal finale, 'Penny Dreadful' is a sometimes-gorgeous piece of television that could have more than earned accolades on its creepy atmosphere alone. Thankfully, it has Eva Green on board to make all that creepiness seem like the only place in the world anyone would ever want to be. 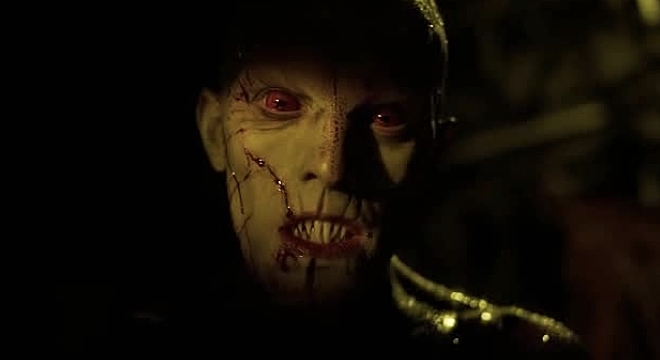 'Penny Dreadful' comes from Showtime Entertainment as a three-disc set. Each disc is 50GB and either contains multiple episodes or, as is the case with disc three, contains the finale and the special features.

'Penny Dreadful' is the kind of show that lives and breathes in the minute details of its immaculate set dressing and presentation. It should come as no surprise, then, that image on the discs manage to live up to that expectation, delivering a very detailed, crisp, clean, and vibrant image that make the darkness look downright inviting most of the time.

Fine detail is present throughout and it rarely drops – though there are a few instances where the usual crispness falls off somewhat. The majority of the time, however, the image produces nice facial features and textures on the detailed costumes worn by the cast. Other details are delivered sharply as well, including the fog encased backgrounds and the terrific sets that were built specifically for this series.

Color is bright and vibrant, even though much of the palette is drab grays, browns, and blacks. But in a series as blood-soaked as this, the red stands out brilliantly, without ever looking like it is oversaturated or too intense. Contrast, too, is handled nicely. As the series is obviously one that favors the darkness, it is nice to report the black levels here are of the robust sort. Shadows are deep, inky, and free from any sign of banding or crush. Whites are also handled nicely – though they are used differently – with a nice range of mild to hot, without burning too brightly.

Overall, this is a wonderful looking series that has been given a very nice image.

The Dolby TrueHD 5.1 mix does a nice job of delivering the various aspects of the series, while playing up the atmospheric elements to augment the terror and creepiness of the narrative. Dialogue is handled evenly, usually taking command of any given scene, as sound effects and music tend to hang back. Although the mix favors dialogue, the balance can sometimes feel out of whack, by pushing another element to the forefront for seemingly no reason.

Still, the balance is quite good for the most part, and that helps play up some of the more immersive elements on display. The mix handles big open spaces as well as it does tight, cramped corners of underground gambling establishments. The rear channels are constantly working, delivering everything from the creeks and groans of an old Victorian mansion to the wail of a vampire with a sword being driven through its heart. Music also sounds good – especially the title sequence's main theme – and is delivered primarily through the front channels, so as to benefit from the addition of LFE.

This is a surprisingly robust audio mix that breathes life into the undead creatures bounding about this series.

What is a Penny Dreadful? (HD, 2 min.) - A brief overview of what a penny dreadful is and how it inspired modern fiction.

Coming Together (HD, 2 min.) - A brief overview of the preproduction that went into the creation of Penny Dreadful.

The Artisans: Part One Set Decoration & Props (HD, 3 min.) - A closer look at the individuals who helped create the sets and the props to make it look like Victorian London.

The Artisans: Part two Production Design (HD, 2 min.) - The second part of how Victorian London is created in the episodes of Penny Dreadful.

The Grand Guignol (HD, 2 min.) - Creator John Logan talks about how important the theater is to his story in Penny Dreadful.

Prostitution and Sex in the Victorian Age (HD, 4 min.) - Writer Matthew Sweet takes viewers through the world behind the world of Victorian London, especially the sex trade and prostitution.

British Exploration and the Search for the Nile (HD, 2 min.) - Writer Matthew Sweet again comes to you to speak about Victorian London's preoccupation with exploration.

The Science of Medicine (HD, 3 min.) - Matthew Sweet discusses how medicine and science converged in the 19th century.

'Penny Dreadful' was a series that, when it was announced looked as though it had a tremendous amount of promise, but also looked as though it might favor style over substance. Happily, that is not the case, as the only real stumbling block the series ran into was one of pacing. It was so indulgent with its well-crafted character flourishes it seemingly forgot that, by the end, it still had a story to tell. The incoherent finale may be the result of the creators not knowing whether or not the series would be renewed, so let's all cross our fingers a season 3 order comes earlier to prevent another rush job. With great image and sound, and some interesting but slight features, 'Penny Dreadful' comes recommended.

Sale Price 8.09
List Price 29.99
Buy Now
3rd Party 5.49
In Stock.
See what people are saying about this story or others
See Comments in Forum
Previous Next
Pre-Orders
Tomorrow's latest releases