Anatomy of a Murder - Criterion Collection

A virtuoso James Stewart plays a small-town Michigan lawyer who takes on a difficult case: that of a young Army lieutenant (Ben Gazzara) accused of murdering the local tavern owner who he believes raped his wife (Lee Remick). This gripping, envelope-pushing courtroom potboiler, the most popular film from Hollywood provocateur Otto Preminger, was groundbreaking for the frankness of its discussion of sex—more than anything else, it is a striking depiction of the power of words. With its outstanding supporting cast—including a young George C. Scott as a fiery prosecuting attorney and legendary real-life attorney Joseph N. Welch as the judge—and influential jazz score by Duke Ellington, Anatomy of a Murder is a Hollywood landmark; it was nominated for seven Oscars, including best picture.

Courtroom dramas have been a movie staple since the dawn of talking pictures. Most, intentionally or not, adopt a melodramatic slant, with histrionic revelations, shocking twists, devious duplicities, and a humdinger of a denouement. Yet the majority of real-life trials would put an audience to sleep in a matter of minutes. Dry, tedious, and painstakingly methodical, our justice system moves along at a snail's pace, and any Hollywood movie with the audacity to accurately reflect it would never turn a profit.

Otto Preminger's 'Anatomy of a Murder,' however, comes closer than most to putting a realistic spin on the courtroom film. Oh, it certainly possesses its share of salacious details - and its enduring notoriety is a direct result of the censorship it brazenly scorned - but at its core, this lengthy adaptation of Robert Traver's bestselling novel finely depicts the mechanics of a trial from inception to completion without any frills or clever shenanigans. It tells the truth, plain and simple, and its subtlety and intelligence have kept it from becoming a relic of its time. Other films may contain more combustible elements, but 'Anatomy of a Murder' remains strangely riveting, providing an insider's perspective on how a defense is mounted and executed. It ain't always pretty, but it can be fascinating.

Long before the days when "temporary insanity" became a catch-all defense for every felon without a legal leg to stand on, 'Anatomy of a Murder' put this clever, dubious, and, at the time, novel strategy in the spotlight. Traver, himself a judge on the Michigan Supreme Court, based his tale on an actual trial in his state, which makes the story more intriguing. And though he takes a bit of dramatic license, Traver sticks admirably close to the facts, and so does Wendell Mayes' screenplay, which lends the film a refreshing realistic aura and adult sensibility most of its predecessors lack.

When Lieutenant Frederick Manion (Ben Gazzara) murders the bartender who allegedly raped his wife, Laura (Lee Remick), defense attorney Paul Biegler (James Stewart) takes the case even though he harbors doubts about the veracity of his clients' stories. Laura is quite a looker, a loose party girl who attracts attention wherever she goes and likes it, while Manion, a typical macho hothead, certainly seems capable of flying into a jealous rage. To win his case, Biegler must keep them both in check and hope he can convince the jury Manion didn't know what he was doing when he shot his wife's supposed assailant (lover?) at point-blank range...not a small task, considering one of his opposing attorneys is Claude Dancer (a young George C. Scott), a ruthless hotshot from the state's attorneys office who bullies witnesses like schoolyard foes. Yet Biegler, an affable, forthright small-town lawyer (with a flair for colorful courtroom theatrics), makes a worthy adversary, and enlists the aid of his old pal and colleague, Parnell McCarthy (Arthur O'Connell) - on the condition he stays sober till the trial's end - and gal Friday Maida Rutledge (Eve Arden) for both moral and investigative support. Which way the jury will swing, however, is anybody's guess.

And that's one of the joys of 'Anatomy of a Murder.' The case isn't cut and dried, and any revelations are subtle and ambiguous. Though we keep waiting for the big "Perry Mason moment," it never comes. Unanswered questions linger even after the trial concludes, a fact that will surely rankle some viewers and cause them to term the film unsatisfactory. Such incidents in real life, however, are rarely tied up in a pretty, neat bow, which makes the movie unique for its time...and also timeless.

No stranger to controversy, Preminger often pushed the boundaries of censorship, thumbing his nose at the ridiculous rules the motion picture governing board often imposed. In the romantic comedy 'The Moon Is Blue' (1953), he ignored the edict of the censors - and subsequently lost their seal of approval - by allowing the word "virgin" to be used. The resulting brouhaha stoked interest in the film and, despite the fact that it wasn't very good, made it a blockbuster. 'Anatomy of a Murder' goes a couple of steps further, with the repeated use of the word "panties" causing the uproar, along with "sperm" and "rape." Such frank talk was anathema in movies up to that time, and 'Anatomy of a Murder' was instrumental in loosening and ultimately abolishing censorship in American cinema. (The only concession Preminger made was changing the word "penetration" to "completion"; a small point now, but just enough then to satisfy the powers-that-be.)

The film's acting is first-rate, with Stewart leading the charge as Biegler. In one of his most natural performances, the legendary actor balances passion with introspection and cynicism with bemusement to create a full-bodied portrait of a simple man. Remick resembles a young Jessica Lange as the vivacious and curvaceous Laura, who seems both innocently childlike and slyly manipulative. Gazzara and Scott both play angry egotists well, and O'Connell brings warmth and humor to his sidekick role.

'Anatomy of a Murder' feels like it should have a bigger payoff, but you've got to admire its restraint in that regard. Real life isn't Agatha Christie, and Preminger is wise to respect that viewpoint, presenting a spicy tale in a straightforward, almost clinical manner. From almost the beginning of the film, the audience feels like a member of the jury, and it's that perspective that helps make the film absorbing, exciting, and fulfilling.

'Anatomy of Murder' arrives on Blu-ray packaged in a standard Criterion case. Tucked inside is a handsomely produced 32-page booklet that includes an insightful, well-written essay on the film by Nick Pinkerton and a reproduction of a 1959 Life Magazine profile of Judge Joe Welch that talks about his transition from the bench to a movie set. There's also a cast and crew listing, notes about the video and audio transfers, and several black-and-white photos. Video codec is 1080p/AVC MPEG-4 and default audio is a new DTS-HD Master Audio 5.1 track. (The original monoaural track, presented in uncompressed PCM, is also available for purists.) Once the disc is inserted into the player, the static menu with music immediately pops up; no previews or promos precede it. 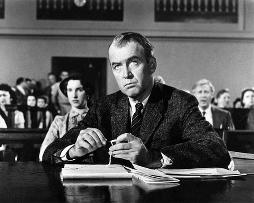 'Anatomy of a Murder' is blessed with a spectacular 1080p/AVC MPEG-4 transfer that beautifully renders Sam Leavitt's stark yet elegant black-and-white cinematography. Fine grain supplies essential texture and lends the image a marvelous film-like feel. Taken from a new 35mm master positive struck from the original camera negative, this 4k transfer has been meticulously restored, with only a couple of nicks and errant marks sullying the pristine picture. Clarity and contrast are top-notch, and a high level of gray scale variance provides both depth and immediacy, allowing us to truly immerse ourselves in the action.

Details possess significant pop. We can read the spines of Biegler's album collection, drink in the weave of his tweed jacket, and enjoy the defined look of all the spectators' faces in the crowded courtroom. The location exteriors exude a natural appearance, as do the rustic interiors. Strong black levels beef up nocturnal scenes, yet crush is never an issue, while whites are bright, well defined, and resist blooming. Close-ups brim with superior crispness, highlighting all the creases and intense expressions of the principals.

Best of all, no noticeable digital enhancements, such as edge sharpening or DNR, seem to have been applied, and no anomalies, like pixelation or mosquito noise afflict this dazzling effort. This is another stellar effort from Criterion that will certainly please both fans and videophiles alike. 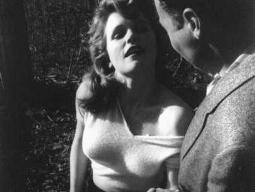 The DTS-HD Master Audio 5.1 track was created at 24-bit from the original D/M/E tracks and original stereo music recordings, and the results are quite good. Any age-related defects, such as hiss, pops, and crackles, have been removed, leaving a clean, nuanced mix that makes up in clarity what it lacks in multi-channel definition. Almost all the audio is anchored up front, but the fidelity is so pronounced, the sound effortlessly fills the room. Every line of dialogue is crystal clear, from the quietest courtroom asides to the most bombastic and heated exchanges, and atmospherics are well integrated. The courtroom buzz, cacophony at the bar, and hum of engines on the road fit well into the track's fabric, enhancing the action without overpowering it.

Dynamic range is superior, and really comes into play when Duke Ellington's high octane score kicks into gear. The screaming brass flaunts a purity of tone that's breathtaking, while the percussion provides essential weight without adopting a lumbering heaviness. Thankfully, distortion is never an issue, and no other imperfections sabotage this fine aural effort.

A remastered mono track, presented in uncompressed PCM, is also available for those who wish to better replicate the original viewing experience of this film. It, too, sounds great, and nicely complements the restored video, but the new DTS-HD track is the clear winner, especially if you're a Duke Ellington or jazz fan. 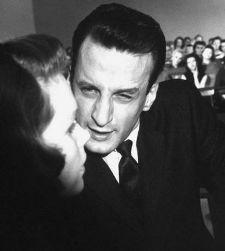 As usual, Criterion pads this release with a healthy spate of supplements examining the many facets of this classic production. Surprisingly, there's no audio commentary, but that's the only omission in the otherwise substantive and involving extras package. And all the material is in glorious HD. 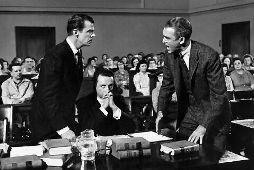 In these far more permissive times, 'Anatomy of a Murder' has lost some of its titillating sting, but talk of panties and sperm aside, it remains a solid, nuts-and-bolt courtroom drama that chronicles a scandalous homocide from the inside out. Director Otto Preminger's just-the-facts-ma'am style suits the gritty material well, and natural performances from James Stewart, the always lovely Lee Remick, Ben Gazzara, Arthur O'Connell, George C. Scott, and the wonderfully acerbic Eve Arden keep us engrossed throughout the substantial running time. Criterion's Blu-ray release is as stunning as the trial, with a sharp as nails transfer, exceptional audio that honors Duke Ellington's thrilling jazz score, and a sizeable dossier of supplements injecting more energy into an already potent film. 'Anatomy of a Murder' may not be the best courtroom flick ever produced, but its no-nonsense presentation keeps it fresh and relevant, and it comes highly recommended.

Sale Price 27.99
List Price 39.95
Buy Now
3rd Party 26.97
In Stock.
See what people are saying about this story or others
See Comments in Forum
Previous Next
Pre-Orders
Tomorrow's latest releases