She Killed In Ecstasy

For his follow-up to VAMPYROS LESBOS, writer/director Jess Franco  delivered perhaps his most twisted shocker of the 70s: In what fans and critics consider to be her greatest role, the luscious Soledad Miranda in one of her final performances before her tragic death stars as the vengeful widow who seduces then murders the men and women responsible for her husband's suicide. Howard Vernon (THE AWFUL DR. ORLOFF), Paul Muller (BARBED WIRE DOLLS), Ewa Strömberg (VAMPYROS LESBOS) and Jess himself co-star in this EuroCult classic featuring another epic sexadelic lounge score by Manfred Hübler & Siegfried Schwab now remastered in HD and featuring all-new Extras. It's Franco at his perversely erotic best, like you ve never seen or heard it before!

Within a matter of a couple weeks after wrapping 'Vampyros Lesbos,' Jesús Franco was right back at it again with another sleazy thriller in 'She Killed in Ecstasy.' And as is the usual case in any of his shoddy but wonderfully naughty grindhouse features, the flick shows a good deal of style and the occasional sparkle of brilliance that sometimes leaves his fans, along with cinephiles, wondering what could have been. That's not to suggest he could have achieved the same level of success as the filmmaking greats of the same period, but the potential was there for something better, more accessible for mainstream audiences and perhaps even more memorable. But as it stands, those minor flairs of genuine talent are quickly drowned in an ocean of cheap production value, generally poor performances and stilted dialogue. And 'She Killed' is ultimately no different with only a few pockets of worthwhile skill.

From the story standpoint, sadly, skill and talent are the least likely words used for describing this tawdry schlock-fest. For the purposes of time — and possibly a lack of original ideas as well as funds — the Spanish-born filmmaker retooled the plots of two previous movies he made a few years earlier. Toning down the eroticism aspect somewhat — at least, when compared to the rest of oeuvre — the plot is a simple and straightforward revenge thriller, which was quickly growing into a popular formula at the time. It follows a wife's fervent pursuit for justice against those who wronged her husband, who, after being barred from practicing medicine because of his usual experiments with human fetuses, went insane and committed suicide. Apparently, crushing his dreams of publicly playing God with the unborn is enough to drive him into a catatonic state and later death. Murdering those for making the right call is the only logical step. 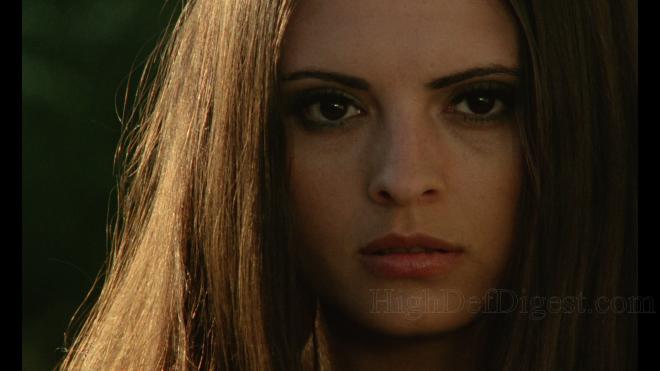 Summed up like this, the story is really pretty silly, and much of the brisk 80-minute runtime is filled with unusually long scenes of either pointless conversations or quiet sulking, mostly of the wife pining and brooding about her mansion on an isolated island. The wife is none other than the stunningly beautiful Soledad Miranda, and she surprisingly delivers one of her best — and sadly, one of her final — performances of her career. As a woman haunted and distraught by her husband's sudden demise, Miranda is a passionate and determined individual with round, glaring brown eyes that seem friendly and sociable one minute but malicious and psychotic the next. She uses her exotic beauty and those charming doe-like eyes to lure the so-called medical professionals who ruined her husband's career (Ewa Strömberg, Paul Muller, Howard Vernon and Jesús Franco). It's your typical tale of seduction and vengeance at the hands of a gorgeous temptress who kills out of love and, of course, gets away with it in the end.

Clearly, any entertainment value in 'She Killed in Ecstasy' doesn't come from the plot or much of the acting — outside of Miranda's passionate display of obsession and slow progression into madness. It ultimately comes from Franco's unique style in telling the story and the many subjectively beautiful composition shots. Several moments where Miranda simply stands still while the camera lingers and dawdles on her beauty are like pictures of a rare bird just for an instant noticing someone staring at it before suddenly taking flight. These picture moments are all the more haunting when we remember they were taken only a couple months before her unfortunate death. The sex scenes give us more to ogle over, but we're more captivated by her black widow skills for luring in her victims, a bunch of stuffy professionals with secret perversions. Franco did an excellent job of capturing her beauty, and Miranda really killed it here.

Severin Films brings 'She Killed in Ecstasy' to Blu-ray as a two-disc package where the second disc is a CD collecting the soundtracks from three of Jesús Franco's films. The Region Free, BD25 disc sits comfortably atop the CD on the same panel. With an attractive, all-black slipcover with a rectangular window on the right side, both discs are housed inside a clear eco-elite case. At startup, the Blu-ray goes straight to a standard menu selection with a silent static screen.

Mrs. Johnson seeks vengeance on Blu-ray with an amazingly good 1080p/AVC MPEG-4 encode. From all appearances, it seems as though the high-def transfer was made from a brand new remaster of the original elements.

Presented in its original 1.66:1 aspect ratio, the video is highly detailed. We can plainly make out the tiniest objects in the background, the funky furniture and psychedelic artwork are distinct, and every wrinkle in the groovy outfits are sharply defined. Facial complexions are revealing, exposing every pore and negligible blemish. Of course, some scenes are worst and blurrier than others but easily forgiven as the result of bad cinematography and damage the source has endured over the years. Such moments appear faded and dull with minor scratches, dirt and white specks. Contrast is comfortably bright with crisp, brilliant whites throughout while black levels are true and often inky rich, allowing for excellent clarity of the finest details during poorly lit scenes. Primaries are richly saturated with reds looking particularly vivid while secondary hues are boldly rendered and colorful, adding a very lively appeal.

At its best, imaging feels broad with an excellent sense of spatial presence and clarity. Dynamic range is generally good and, for the most part, satisfying; however, it's also comes across rather uniform and even, often feeling a bit limited during certain moments. Nevertheless, the funky music benefits the most, allowing every instrument and note to be cleanly heard. The low-end is somewhat lacking but still appropriate for a movie of this vintage and production. Although the ADR work is pretty poor and sometimes a bit distracting, vocals are nonetheless precise and intelligible.

The lossless mix's weakest aspect is in the unfortunate amount of loud hissing, popping and noise in the background, which can be distracting at times. Several moments also suddenly jump a few decibels and are ear-piercingly loud, making the track very bright and revealing a great deal of distortion in the upper ranges. We could chalk this up to a fault in the elements, but it's enough of an issue to ruin the presentation.

In the sleazy thriller 'She Killed in Ecstasy,' Jesús Franco once again demonstrate a knack for interesting camerawork and a few pockets of mild brilliance spoiled by cheap production value, generally poor performances and stilted dialogue. Nevertheless, it's worth watching for its stylized approach to a familiar formula and the beautiful Soledad Miranda's passionate performance. The Blu-ray from Severin arrives with amazing picture quality but a mediocre, somewhat disappointing audio presentation. Supplements are a bit light but mostly satisfying, making the overall package a strong addition to any cult enthusiast's library.

Sale Price 25.24
Buy Now
3rd Party 35
In Stock.
See what people are saying about this story or others
See Comments in Forum
Previous Next
Pre-Orders
Tomorrow's latest releases