From Jess Franco, the filmmaker The Vatican called the most dangerous director in the world , comes the most celebrated movie of his legendary career: Stunning Soledad Miranda  stars as a vixen vampire who lures women to a Mediterranean island to satisfy her insatiable lust for female flesh and blood. It s a mind-bending odyssey of surreal erotica and 70s EuroHorror, featuring the psycho-sexadelic soundtrack that remains a global phenomenon.  Ewa Strömberg (SHE KILLED IN ECSTASY), Dennis Price (VENUS IN FURS), Paul Muller (NIGHTMARE CASTLE) and Franco himself co-star in this landmark cult classic, now remastered in HD and featuring all-new Extras filmed with the director shortly before his death. Experience Franco' masterpiece like you'e never seen or heard it before!

Of all the movies within the Jesús Franco canon, which is a jaw-droppingly enormous collection for a single filmmaker, 'Vampyros Lesbos' — I'm sure everyone can guess the translation into English — is probably his best-known feature. Or rather, the sleazy low-budget horror flick is probably his most infamous. Of course, Franco is arguably better known among mainstream audiences for 'The Awful Dr. Orloff' and 'Count Dracula' with Christopher Lee and Klaus Kinski. But when it comes down to it, the Spanish filmmaker, whose career spans a whopping seven decades, is forever synonymous with Euro-sleaze exploitation cinema, and 'Vampyros Lesbos' can be seen as his magnum opus, the pinnacle of his trashy erotic horror fascination. The production remains just as shoddy and laughably bad as all his other works, but as with many of his movies, one has to sift through the lewd raunchiness, see beyond the gratuitous nudity and smut, in order to see Franco's unique artistic panache.

The drawback to that approach, of course, is having to sit through some objectively terrible camerawork and cringe-inducing dialogue, the sort to truly challenge the patience of moviegoers. One terrifically hilarious moment is an action sequence where two men (Andrés Monales and Paul Müller) are caught in a gunfight against the zombie-like Morpho (José Martínez Blanco), devoted but silent servant of the deadly vampire being hunted. The actors are obviously using toy cap guns that look like snub-nose revolvers, and the pop is the distinctive sound of the red ring caps we use to load them with. There's a window standing between the sudden eruptions of gunfire, but it never shatters. Added to the hilarity, Franco bizarrely zooms in on the two men trying to hide in between door frames and then quickly zooms out to show Agra and the vampire have escaped. Instead, of shooting the action from different angles and editing them together in post, Franco did the whole thing in a single take so as to move on to the next scene. This is shoestring filmmaking at its finest. 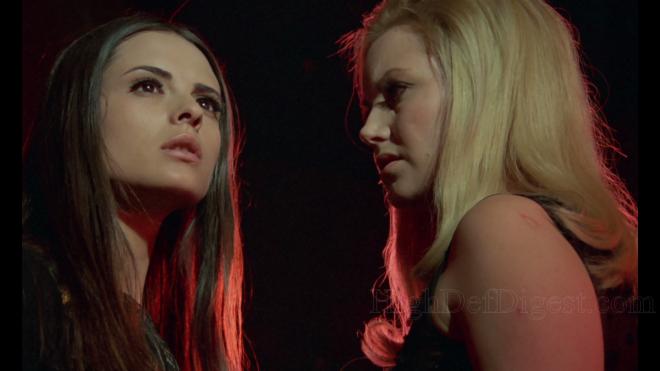 There are several other such moments worth admiring in stupefied amazement, but the point is made. Franco's particular style is not for everyone, but if one can suffer through it and hold back the sudden bursts of laughter, along with the dry-heaving, we find little glimpses of intelligence, of an actual creative process attached to the crude vulgarity. The script, which Franco co-wrote with Jaime Chávarri, closely follows the plot of Bram Stoker's beloved Dracula, even using the name of the character as an important plot point. Linda Westinghouse (Ewa Strömberg) is like Jonathan Harker and Mina Murray rolled into one, a clerk from a law firm traveling to an isolated, mysterious island to settle a large inheritance. There, she meets Countess Nadine Carody (the stunning gorgeous Soledad Miranda), and when she explains her relationship to Dracula, it's implied she was one of his three seductive female vampires. And now, she's set her eyes on seducing Linda.

The two men mentioned earlier are Linda's boyfriend Omar and her therapist Dr. Steiner, but neither fits the role of Van Helsing. That honor goes Dr. Alwin Seward (Dennis Price), who's also tasked with selling some of the film's most ridiculous lines, and he's caretaker to the deranged patient Agra (Heidrun Kussin), playing an overly dramatic version of Renfield, except much, much sexier. So, part of the film's cleverer aspects is translating Stoker's quintessential horror novel with a heavy lesbian theme, and it works fairly well for the most part. Although Franco wasn't exactly the first to this or explore the sexual tension underlying the vampire genre, he could be the first to have brought to the forefront with such glaring heavy-handedness. Also, in spite of the shoddy camerawork, the colorful cinematography of Manuel Merino is impressive while the groovy musical score Franco, Manfred Hübler and Siegfried Schwab complements the visual with trance-like rhythms, making 'Vampiros Lesbos' into a unique mind-expanding, psychedelic experience.

Severin Films brings 'Vampyros Lesbos' to Blu-ray as a two-disc combo pack: one a Region Free, BD25 while the other is a DVD-9 with an alternate Spanish-language version of the film. With an attractive, all-black slipcover with a rectangular window on the left side, both discs are housed inside a clear eco-elite case, one atop the other. At startup, the Blu-ray goes straight to a standard menu selection with a silent static screen.

Countess Nadine satisfies her insatiable lust for female flesh with a shockingly good 1080p/AVC MPEG-4 encode. From the looks of things, it would appear the high-def transfer was made from a brand new remaster of the original elements.

The video shows amazing detailing in the most random objects, from the tiny stones in the concrete footpaths and the individual bricks along the walls to the unique pattern design of the wallpaper and the funky, fleecy furniture. Individual hairs are sharply distinct, and we can clearly make out the threading in the clothing. Facial complexions are revealing, exposing every pore, wrinkle and negligible blemish. The worst, blurrier scenes are easily forgiven as stock footage and the result of bad cinematography, as in accidentally shot out of focus. Contrast is comfortably bright with crisp, brilliant whites throughout while black levels are true and often inky rich, allowing for excellent clarity of the finest details during poorly lit scenes. The 1.66:1 image is awash with a wide array of psychedelic colors and sumptuous primaries, making the presentation appear rejuvenated and energetic.

The tiniest details in the background are distinct, from individual footsteps to the rustling of leaves. With a generally good and satisfying mid-range, the funky, psychotropic music benefits most from the jump to high-resolution audio. We can clearly make out the unique sounds of individual instruments and appreciate each note with great fidelity and warmth. The lossless mix also comes with an impressive, hearty low-end, providing some welcomed depth and weight to the music. Although the ADR work is pretty poor and sometimes a bit distracting, vocals are nonetheless precise and intelligible.

The track's weakest is in the unfortunate amount of loud hissing and noise in the background. It's not too terrible, but it's audible enough to be distracting at times. Several moments also come off noticeably bright, revealing some minor distortion in the upper ranges. All in all, however, it's a pretty good high-rez track that nicely complements the video.

'Vampyros Lesbos' is arguably Jesús Franco's most infamous movie, the epitome of low-budget Euro-sleaze exploitation cinema. Starring the beautiful Soledad Miranda, the schlocky horror flick is a stylishly interesting retelling of Stoker's Dracula, except with a lesbian romance at the center. The Blu-ray arrives with a surprisingly good picture quality and a satisfying audio presentation. With a nice assortment of bonuses, the overall package of the classic cult film is a great addition to the collection.

Sale Price 24.26
List Price 34.95
Buy Now
3rd Party 25
In Stock.
See what people are saying about this story or others
See Comments in Forum
Previous Next
Pre-Orders
Tomorrow's latest releases