In the years before the Civil Rights Movement when the South was still deeply segregated and many African-Americans suffered severe discrimination, all-black films were a rarity. Those that did get produced often came from independent sources and received limited distribution, but two exceptions from the 1940s - both musicals - hailed from major studios and enjoyed relatively wide releases. MGM's 'Cabin in the Sky' and 20th Century-Fox's 'Stormy Weather,' which premiered seven months apart in 1943, provided mainstream white audiences an opportunity to appreciate and respect the considerable talents of black vocalists, dancers, and instrumentalists. Yet while ‘Cabin in the Sky’ reinforces some negative black stereotypes, 'Stormy Weather,' despite a wispy plot, sketchily drawn characters, and the constraints inflicted upon it by a narrow-minded society, tries its best to break the mold. Though it doesn’t always succeed - it occasionally (and disappointingly) caters to the white establishment’s warped view of African-Americans - it did elevate the status of blacks on film, and its impact in that regard, though it may have seemed small at the time, cannot be underestimated today.

Packed with impressive musical performances, 'Stormy Weather' is a tuneful extravaganza renowned for its historical relevance, entertainment value, and progressive presentation. What it lacks, however, is an involving story. Andrew Stone's film is basically an elongated revue loosely stitched together by an innocuous, bland, and unendurably dull backstage yarn that often stalls the movie’s momentum. Few films possess less plot than ‘Stormy Weather,’ which probably should have abandoned a narrative structure altogether. The picture only runs 78 minutes, and with more than 15 musical numbers, several of which are quite lengthy, there’s not much time to mount an involving story.

What we get instead are the reflections of accomplished dancer Bill Williamson (Bill “Bojangles” Robinson), who regales a group of children on his country estate with stories about his show business career. He begins by recalling his return from military service in World War I with his smooth-talking buddy Gabe (Dooley Wilson, best known for his portrayal of Sam in ‘Casablanca’), then charts his slow and arduous rise to stardom. Along the way, he meets the beautiful and talented singer Selina Rogers (Lena Horne), with whom he becomes infatuated, but her driving ambition quashes any chance of romance between them. Undeterred, Bill continues to toil away, working his way up through the ranks until he achieves the acclaim he so richly deserves.

Though its story may be slim, ‘Stormy Weather,’ to its everlasting credit, portrays its characters as normal folks whose wants and needs are no different than anyone else’s. Color isn’t an issue, except for the fact there’s nary a white face anywhere to be seen. Gone is the air of subservience that defines so many African-American roles of the period, and it’s refreshing to see black characters in a film from this era pursue their lofty dreams, carry themselves with confidence, and control their own destinies. While it would take a few more years for such ideas to really take root (the arrival of actor Sidney Poitier on the Hollywood scene in 1950 would be a major turning point), ‘Stormy Weather’ lays the groundwork for a more liberal view of race and a much-needed attitude of acceptance.

Robinson gained notoriety dancing with moppet Shirley Temple in a number of 1930s musicals, so it’s a treat to see him strut his stuff here on his own terms. Though at 65 he’s no spring chicken (and 40 years older than his comely co-star!), Robinson doesn’t look anywhere near his age, possessing boundless energy and executing several physically demanding routines. Few dancers can match his style, grace, and athleticism, and we’re lucky we have a film that documents and salutes his peerless abilities. Sadly, Robinson would die six years after the release of ‘Stormy Weather,’ which would mark his final film appearance.

The young, golden-voiced Horne, however, is the picture’s main attraction in what would be - quite criminally - one of her only leading roles. Horne blazed a trail by becoming the first black performer to snag a long-term contract at a major studio, but MGM didn’t have the guts to properly use her. More of a symbol than a star, Horne mostly appeared in all-star Technicolor musicals in isolated numbers that could all too easily be cut from prints slated for exhibition in the South. She was loaned to Fox for ‘Stormy Weather,’ and though she acts her part well, the character of Selina is so shallow only minimal skills are required to pull it off. Of course, Horne really comes alive when she sings, and her passionate performance of the title tune - one of the all-time great torch songs - is a classic movie moment. Thereafter, ‘Stormy Weather’ would be forever identified with Horne and, much like ‘Over the Rainbow’ was for Judy Garland, it would become her personal anthem.

‘Stormy Weather’ also showcases such legendary talent as composer Fats Waller, who sings his signature tune, ‘Ain’t Misbehavin’’ (sadly, he would die at age 39 only a few months after the film’s release); zoot-suited bandleader Cab Calloway (of hi-de-ho ‘Minnie the Moocher’ fame), whose spritely presence and swinging big band help hot-wire the film’s closing numbers; and my personal favorites, the awe-inspiring Nicholas Brothers, arguably the most electrifying dance duo in history. The brothers don’t appear until the final five minutes (the anticipation is agony), but their breathtaking display of synchronized leaps, splits, twirls, and taps defies both gravity and logic, and they all but steal the film. To quote Frank Sinatra, who was commenting on a different musical number in 'That's Entertainment!,' "You can wait around and hope, but you'll never see the likes of this again."

Splashy sets, glamorous costumes, and top-notch production values lend ‘Stormy Weather’ a decidedly ritzy feel, much like any other A-level musical of the period. The only element lacking is Technicolor, but the black-and-white photography is so lush and striking, we hardly miss it. Fox musicals never achieved the same renown as those produced by rival MGM, but ‘Stormy Weather’ comes closer than most to replicating the Metro look. And that’s a good thing.

Though the talent on display is tremendous, the lack of story and character development ultimately dulls some of the film’s luster. Good musical numbers can stand on their own (and these do), but they need a cohesive connector to link them together. And while I realize a more substantive narrative might have been too difficult to construct and properly execute given the turbulent social climate of the time - and might have wound up overshadowing (in a negative way) the movie’s amazing musical performances - that’s the missing piece of this film’s puzzle. Without a strong plot, ‘Stormy Weather’ is a solid, entertaining musical with plenty of historical relevance, but it can’t be classified as a truly great film. 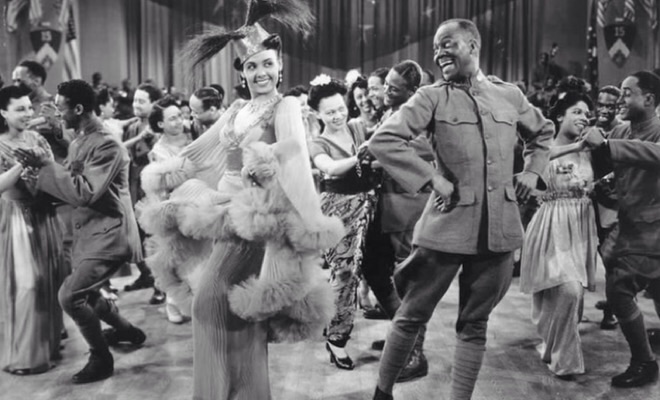 'Stormy Weather' arrives on Blu-ray in a limited to 3,000 edition packaged in a standard case. An eight-page booklet that includes an essay by film historian Julie Kirgo and an array of photos from the film is tucked inside the front cover. Video codec is 1080p/AVC MPEG-4 and audio is DTS-HD Master Audio 1.0. Once the disc is inserted into the player, the static menu without music immediately pops up; no previews or promos precede it.

As lush and silky smooth as Lena Horne's vocals, the 1080p/AVC MPEG-4 transfer of 'Stormy Weather' makes this vintage classic look almost brand new. Superior clarity and contrast coupled with a faint layer of grain combine to produce a very pleasing image that's bold and sleek, yet still inherently filmic. A widely varied gray scale, distinguished by inky black levels and well-defined whites, enhances depth and makes details pop, and good shadow delineation keeps crush at bay. Close-ups highlight fine facial features well, and only a couple of errant nicks dot the pristine source material. No noise or pixelation disrupt the picture, and no digital doctoring could be detected. I'm a sucker for a terrific black-and-white transfer, and this one hits all the right notes and makes this vintage musical truly sing.

The DTS-HD Master Audio 1.0 track supplies clear, well-modulated sound with a high degree of dynamic range. That's good news for a movie that's mostly composed of musical numbers, all of which sound fresh, lively, and resonant. Excellent fidelity and a pleasing depth of tone benefit all the vocals and instrumentals, and only a few errant pops and crackles disrupt the presentation. Hiss and distortion are absent, and all the dialogue is easy to comprehend. Subtleties, such as falling rain, nicely shade the mix, and sonic accents, such as Robinson's vigorous tapping, are crisp and distinct. For a movie that's more than seven decades old, 'Stormy Weather' sounds quite good, and this vibrant track should please fans of musicals in general and Lena Horne in particular.

The only supplement is an audio commentary by Dr. Todd Boyd, professor of critical studies at USC. (In an ironic twist, an isolated music and effects track, which Twilight Time usually includes as a standard special feature on its classic film releases, is nowhere to be found on this musical disc. Go figure.) Though Boyd is well spoken and makes cogent points, his commentary focuses almost exclusively on social and cultural issues, with little or no discussion about the film's genesis and production, the lives and backgrounds of the performers, or the musical genre. Boyd notes how 'Stormy Weather' both breaks stereotypes of African-Americans (by allowing them to advance beyond subservient roles) and adheres to them (through a minstrel number and comedy routine reminiscent of Amos and Andy). He also examines the significance of African-American music and dance and its contribution to American culture at large, and looks at racial politics both in the South and in the film itself. Unfortunately, Boyd's knowledge of film in general and musicals in particular seems limited; he alludes to the fact that Fred Astaire borrowed some moves and snippets of style from Bill "Bojangles" Robinson as his career evolved, but fails to mention Astaire paid homage to Robinson seven years before 'Stormy Weather' was made in the 1936 film 'Swing Time,' in which he performs a lengthy and memorable song and dance entitled 'Bojangles of Harlem.'  Because of this, I found Boyd's monologue a bit dry and disappointing, but I can't discount the importance of the social history he relates.

With its all-black cast and progressive depiction of the African-American experience, 'Stormy Weather' is a notable addition to the musical genre, but even a cavalcade of dynamite numbers can't compensate for a flimsy narrative that continually stalls the picture's momentum. Lena Horne's stunning rendition of the title tune, Bill Robinson's impressive tap dancing, and an electrifying specialty by the esteemed Nicholas Brothers substantially raise the entertainment quotient, but despite such showstoppers, I had trouble warming up to the film and connecting to it emotionally. Twilight Time's Blu-ray presentation skimps on supplements, but the luscious video transfer and solid audio will make musicals fans prick up their eyes and ears. Despite its lack of plot and some awkward moments, 'Stormy Weather' is a historically relevant movie that occasionally soars to great heights. And for those reasons, this vintage musical is worth a look.