Dawn of the Planet of the Apes

A growing nation of genetically evolved apes led by Caesar is threatened by a band of human survivors of the devastating virus unleashed a decade earlier. They reach a fragile peace, but it proves short-lived, as both sides are brought to the brink of a war that will determine who will emerge as Earth¹s dominant species.

Dawn of the Preamble

'Dawn of the Planet of the Apes' is best experienced knowing as little as possible. No hype. No expectations. No preconceptions. Don't read the movie portion of this review. Don't watch any trailers. Simply pop in 'Rise of the Planet of the Apes' and follow it with this excellent film that is a cut above normal blockbusters, existing in a place that is not only thrilling and visceral, but also classically character-based.

For those who have seen the film, or who want a more traditional review, keep reading.

Dawn of the Plot Synopsis

'Dawn' takes place ten years ('winters') after the events of the first film. After a global pandemic, created as an attempt to cure Alzheimer's, wiped out humanity, Caesar and his band of super-intelligent apes have taken to the forests north of San Francisco where they are doing quite well. They've built home-like structures in the trees, hunt for food, and are using their increased brain power to build a society. In fact, it has been two winters since anyone has seen a single man.

Until human survivors show up looking for a hydro power plant in apes territory. Jason Clark and Gary Oldman are Malcolm and Dreyfus, the co-leaders of the humans dwelling in what's left of San Francisco. To survive, they must turn the power back on, but to do so will me traveling through ape territory, made all the more terrifying because these apes talk.

This sets in motion a tale of two sets of brothers. We have Caesar and Koba, the emotional and physically scarred ape from 'Rise', on one side. Malcolm and Dreyfus on the other. If it were simply Caesar and Malcolm working together, perhaps there could be cohabitation, but Koba and Dreyfus are damaged beings, instinctually distrusting of other species, driving peaceful men towards conflict.

Dawn of the Review

Given my initial praise for 'Rise of the Planet of the Apes', expectations have been high. Despite my best efforts to keep an even keel, 'Dawn' exceeds said expectations in so many ways. The set-pieces are white-knuckle, edge-of-your-seat experiences, and the filmmakers are smart to juxtapose bombastic ferocity with tender character moments. A movie without villains, it's a drama tackling deep themes about the nature of humanity, about our inherent fears and thirst for violence. Honestly, I'm simply in awe anyone could make a film this complex and character-rich in the current corporate studio system, and can't wait to see this franchise grow. Especially after director Matt Reeves agreed to return for the next installment.

That said, there are a few things that could be improved, and will hopefully evolve in future installments. The apes story is absolutely fucking perfect. It's political and emotional and honest. It's, as Matt Reeves intended, kinda like watching 'The Godfather'...with CGI apes. That said, the human story doesn't always measure up. Some will say it's underdeveloped or simple, but I personally think the issue may be one of Present Drama vs. Backstory. All of the Ape-drama plays out in the movie, but the humans are often limited to emoting about Before. All of the human motivations work pretty great, but they lack the complexity inherent of having to work them out in the story itself. For this movie, it's fine (and a bit of a revelation, helping us connect to both sides of the story), but perhaps could be a little more balanced.

Next, while this doesn't necessarily apply to all movies, I would argue future Apes movies need female characters who are integral to the story, enhancing the themes and plot twists, that aren't simply girlfriends or wives of the main characters. Like 'Rise', 'Dawn' ops for only one lead woman character. The great news is that it's Keri Russell; the bad news is that she doesn't get to do very much. Caesar's wife, Cordelia, while the crux of a few emotional scenes, does even less. What would happen if the next group of human characters are lead by a woman? What would happen if Cordelia decided she should lead the apes? I dunno. Just spitballing ideas. I also don't know want to constrain the filmmakers to meet some required check box. But you all just made an awesome movie. Now do better.

Lastly, we need to talk about Weta's visual effects, which are, more often than not, photo realistic. Combined with great actors like Andy Serkis providing motion capture, Weta has accentuated those performances as well as created the world around these apes. For most of the running time, it's virtually impossible to tell yourself that none of these apes exist. That these sets were filmed EMPTY. However, despite the great job, what (to me) looked perfect in cinemas, there are a few shots that reveal CGI creatures (not main characters).

A few nitpicks aside, 'Dawn of the Planet of the Apes' is grand-yet-grounded blockbuster filmmaking that was excellent in cinemas, and is a treasure to own on Blu-ray. 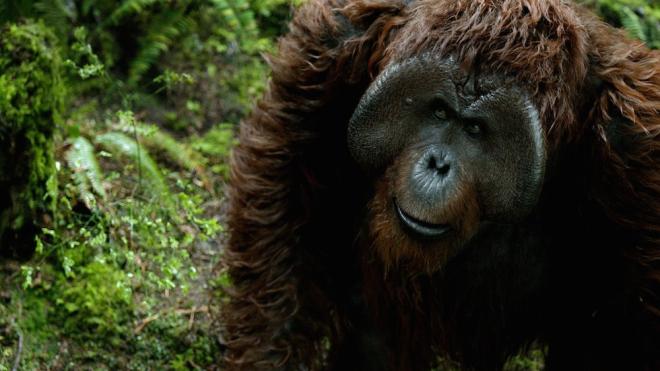 Dawn of the Vital Disc Stats

'Dawn of the Planet of the Apes' swings onto Blu-ray as part of a Blu-ray + Digital HD combo pack that forgoes the standard definition DVD and is housed in a standard one-disc Blu-ray case. This Blu-ray is locked to Region A and includes a teaser trailer for Ridley Scott's 'Exodus: Gods and Kings'. The Digital HD Copy must be redeemed by 12/2/2017 and works with services such as VUDU, iTunes, GooglePlay, and Flixster UltraViolet.

Photographed with a muted color palette fitting the post apocalyptic and rainy San Francisco and Muir Woods settings. Detail and overall resolution seems endless. (CGI) Animal fur, sets, human costumes, and rainy forests all come alive. Skin tones (human and ape) are realistic and well balanced. And, despite the muted palette, there is tons of color pop (particularly things like green moss). Night sequences are also great, highlighting excellent black levels -- check out the scene at the gas station in the woods. The glowing 76 ball is gorgeous, as is the sequences lit by huge fires.

For 99 percent of the film's running time, 'Dawn' approaches reference quality, but is held back because of a couple blink-and-you-miss-them moments of banding, some spikes in noise, and because the occasional visual effect is a touch less real here than there were in cinemas. Very minor quibbles.

While 'Dawn of the Planet of the Apes' debuted theatrically with a stunning Dolby Atmos surround mix, Fox has elected to release this Blu-ray in 7.1 DTS-HD MA. But don't worry, this is a reference quality, demonstration worthy sound mix with a wide dynamic range catering to swirling action sequences and immersive quiet moments.

Despite lacking height channels, the immpressive 'Dawn' soundtrack immediately captures the attention with the soft pattering of rain dripping on leaves, transforming your living room / home cinema into a forrest. From there things only improve, from the guttural ape speak to Michael Giacchino's terrific orchestral score that manages to create new themes while evoking the franchise's origins. LFE levels are tight and punchy, but never overwhelming. Surround effects panning is aggressive too.

The following special features are available on both the DVD and Blu-ray releases.

I personally loved 'Dawn of the Planet of the Apes' for its character work, photo realistic visual effects, suspenseful action sequences, and a top-tier sound mix, all of which make one hell of a Blu-ray. This Blu-ray + Digital HD offers up terrific video, a reference quality 7.1 DTS-HD MA sound mix (that I want to hear again in Atmos), and tons of HD-exclusive Bonus Materials.

Sale Price 4.28
List Price 10.09
Buy Now
3rd Party 2
In Stock.
See what people are saying about this story or others
See Comments in Forum
Previous Next
Pre-Orders
Tomorrow's latest releases