While attempting to help Frankie Stein learn more about her freakycool scaritage, the fashionably fierce ghoulfriends travel back in time to the first day ever of Monster High! There, they meet Sparky, a skullastic teen with an obsession for creating life. But when Sparky follows the ghouls through a killer time portal to modern-day Monster High, the event results in eight of them fusing together into four creeperiffic hybrid Monsters. Now, they'll really have to work together to control their bodies in the big Bitecentennial Play and stop one of Sparky's experiments from destroying imperfectly perfect Monster High!

I must admit that going into 'Monster High: Freaky Fusion,' another entry in the animated series based on the popular fashion doll franchise, I walked in with a bit of hesitation based on my lukewarm, almost indifferent interest of the three previous releases: '13 Wishes,' 'Frights, Camera, Action!' and 'Clawesome Double Feature.' I'm fully aware that the cartoons are really intended for the youngest among us, not for crotchety, snooty, disagreeable grown-ups like me, so I should watch and reserve judgment with that in mind. Be that as it may — and I'm fairly confident I make every attempt at considering the target audience, more for the parent's sake than the child since I highly doubt I've managed to garner the readership of toddlers and grade-school kids.

In fact, sometimes, I wonder if anyone is even reading this at all. Could I get away with writing a bunch of gobbledygook gibberish and no one would notice. Am I ultimately alone in my thoughts?

Is anybody out there? (sad face; maybe a gif with single tear falling)

Argh! Never mind, I'm going off on a completely weird tangent and basically rambling to myself. It's too early in the morning to dive into the deep end, and I'm just barely finishing my second cup of coffee. So, back to the point. Which . . . was . . ? (scroll back to the top) 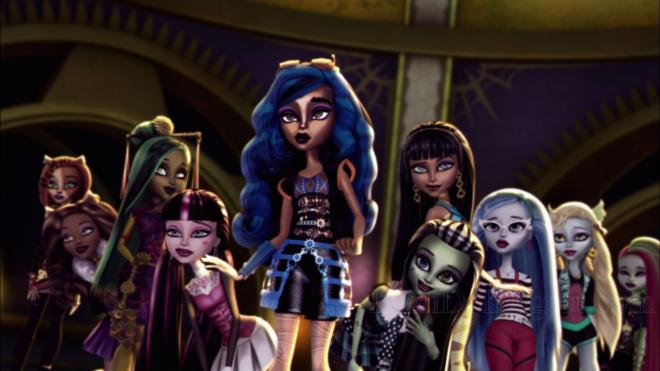 Be that as it may — that I am, of course, way outside the franchise's demographics (if that's not already apparent, but nice save though, right, back on track?) — I watched 'Freaky Fusion' with some admitted bias. It's a small bias, but big enough to make this CGI cartoon decently amusing and arguably the best installment in the series. For those that don't already know, I am an unabashed and loyal fan of Mary Shelley's classic Frankenstein and anything remotely related to the pieced-together from dead body parts, nameless creature. Naturally, I love most everything within the horror genre, but this monster in particular always strikes my fancy because the legendary figure remains the most original creation.

And so, needless to say, this 'Monster High' episode revolves around the fictional legend but also centered on notions of family while staying true to the franchise's staple of feeling empowered by one's differences rather than weighed down by imperfections. Or more specifically, the animated feature from television cartoon writer Keith Wagner follows Frankie Stein as she discovers more about her freaky "scaritage" — a cutesy fusion of the words scary and heritage, remembering that much of the series' charm comes from its clever wordplay. As the whole school prepares for the institution's "Bitecentennial," celebrating two-hundred years of educating the children of famous monsters and fantasy characters, our main ghoulish clique also studies for a special celebration play and a class project that ask them to trace family bloodlines. An emotional Frankie sadly doesn't have access to such history because her parents, as well as herself we can assume, were laboratory made by her grandfather Victor.

Thankfully, a chance memory of a secret vault beneath the school — or should say, laughably convenient plot device — could provide our electrifying heroine with the answers she wants. Led by new character, Robecca Steam, a rather delightful character that with father Hexiciah give the franchise an agreeable steampunk element, the fashionably fabulous ghoul-friends uncover a time-portal that whisks them back to the early construction of the school where Frankie meets studious but obsessive Sparky. And it's easy for the grown-ups to see his importance. But the point is that through Robecca and Frankie, the filmmakers pave the way for expanding on the theme of family being made of the people you love and learn to work together as a unit. It, of course, also sets up a fun action sequence with an awesome steampunk version of Frankenstein's monster, forcing the freaky friends to unite before it destroys their home.

On top of it all, 'Monster High: Freaky Fusion' introduces several new characters, starting with those closest the original circle of friends. Robecca is a very nice addition, but it would have been nice to see more of Jinafire Long while Venus McFlytrap doesn't have much to do except make grow vines everywhere. The newest and arguably best addition comes from the sadly misjudged hybrid monsters, which is quite literally what it sounds like. Neighthan Rot is the child of a unicorn and zombie love-nest, Sirena Von Boo's parents are a mermaid and ghost, Bonita Femur is hilariously but nonetheless cool half skeleton and half Mothman, and finally, Avea Trotter is the stubborn but attractive hybrid of a harpy and a centaur. The new cast lays the foundation for the central theme of the entire franchise: being different is welcomed and makes you special.

Universal Studios Home Entertainment brings 'Monster High: Freaky Fusion' to Blu-ray as a two-disc combo pack with a code for an UltraViolet Digital Copy. A Region Free, BD50 disc sits opposite a DVD-9 inside a regular blue keepcase with a glossy, embossed slipcover and a small catalog for collectors. After a couple skippable trailers, viewers are taken to a menu screen with full-motion clips, music playing in the background and options along the left side of the screen.

If you're reading this, then you are probably familiar with what to expect from this latest installment in the 'Monster High' franchise.

Although the animation work is of the economical, Saturday-morning-cartoon variety, the AVC-encoded transfer is nonetheless an excellent presentation. Fine lines around various objects are sharply detailed and very well-defined. The hair and clothing of characters are the most elaborate, exposing the distinct meticulous work that went into the movie's design. The glitzy and dazzling 1.78:1 image is full of sumptuous, richly-saturated colors. Much of the palette mostly utilizes a vibrant array of softer pastel hues, but primaries remain bold and cleanly-rendered. Blacks are inky and true while contrast levels are brilliant with crisp whites, making the high-def video an attractive watch fans are sure to enjoy.

As with the video, the DTS-HD Master Audio soundtrack offered in this newest ghoulish adventure is not all that different from previous entries, except in one notably amusing area. Rear activity is bustling with energy and lots of salient, discrete atmospherics which fluidly pan around the listening area, nicely enhancing the soundfield and generating several satisfyingly immersive moments. In the fronts, the soundstage feels broad and expansive with convincing off-screen effects that move smoothly between all three channels, exhibiting an extensively detailed mid-range and excellent separation. Low bass is a very nice surprise with accurate response and punch, giving the action and music some appreciable weight. With distinct, very well-prioritized vocals, the lossless mix is a good deal of fun for one of the better 'Monster High' animated features.

The fashionable ghouls of Monster High are back for another misadventure through time and history where the close-knit friends learn the true meaning and value of family. Despite a small bias that makes this viewer enjoy the feature a tad more than the rest, 'Freaky Fusion' is arguably the best installment in the franchise, one that loyal fans and collectors will love. The Blu-ray arrives with strong video and an excellent audio presentation but a disappointingly small assortment of supplements. The overall package is ultimately for the most devoted.

Sale Price 3.23
List Price 12.62
Buy Now
3rd Party 12.95
In Stock.
See what people are saying about this story or others
See Comments in Forum
Previous Next
Pre-Orders
Tomorrow's latest releases