It's time to "fang out" with your favorite ghoulfriends in this frightfully fabulous double feature straight from the latest scare-mester at Monster High! Everyone's ready for some monstrous fun in the sun during spring break in 'Escape from Skull Shores.' But when they find themselves shipwrecked on a totally strange island, Frankie Stein is taken by a mysterious Beast... who may just need a little rescuing of his own! Then it's time to pull together all the student bodies when a meddling normie tries to drive a stake into the imperfectly perfect harmony of Monster High in 'Fright On!' It's up to Frankie Stein, Clawdeen Wolf, Draculauraand their fangtastic friends to prove that the culture clash of Fur and Fang is no longer an issue for this scary-cool student body!

Either I'm growing delusional with age, or I'm already worn out by the lineup of summer blockbusters, but this TV special for the Monster High fashion doll franchise had me surprisingly engaged for the entire 45-minute runtime. Perhaps, after watching a couple of these animated shorts, I'm finally coming around to them, accepting them for what they are, and simply enjoying them as the easy children's entertainment they're meant as. I'll even admit that seeing cartoon characters inspired by horror cinema icons is rather adorable and at first glance, quite appealing. But it isn't until now that I find myself appreciating the concept and the various clever ways writers infuse a range of winks and nods to the franchise's inspiration.

"Escape from Skull Shores" is actually the fourth installment in the series which originally aired in 2012, which makes me think something must have happened between this and later, less-interesting entries, particularly the last two Blu-ray releases. Making this little ghoulish feature, written by Mike Montesano and Ted Zizik, fun is that the plot revolves around Frankie Stein and helping the misunderstood beast named Andy. This could also explain by small delight for the movie because it combines my two favorite monsters. The island in which the beast resides is a clear reference to 1933's 'King Kong,' except the hairy giant also takes some inspiration from the prince beast of Disney's 'Beauty & the Beast.'

The kids of Monster High meet Andy while on their way to the Great Barrier Reef. Their boat is accidentally destroyed by a kraken (another fun wink, wink), but the friends are soon rescued by the charismatic Bartleby Farnum and his hooded goon Kipling, who take the ghouls to Skull Shores in order to capture the beast. This is another clever aspect I found pretty amusing because Farnum is an enigmatic ringleader who collects exotic monsters for his traveling circus. The character is clearly inspired by P.T. Barnum and his name is a play on Barnum & Bailey, which started an exhibition show of biological curiosities and oddities. In the end, it's these little winks and nods which kept me amused and entertained. 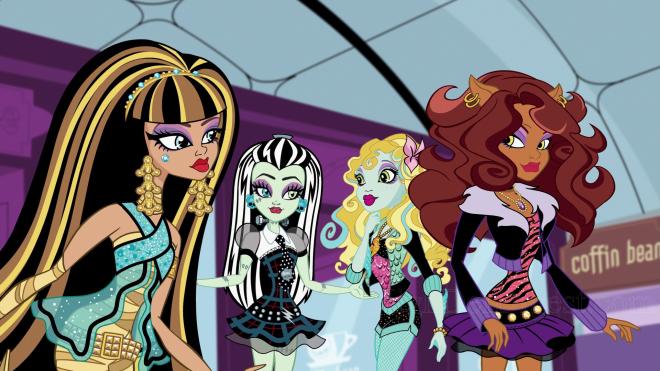 Although made digitally like others in the series, this particular short feature differs by following a more traditional style of animation, as oppose to the computer-generated images of other movies in the franchise. And funnily, there is something a bit more appealing because of it. It's not that one is better than other. Rather, the look strangely feels more natural and less artificial and robotic. It's not high-quality artwork, as it still seems like the result of a limited production and suitable for a Saturday morning cartoon show. I just like it and prefer it. Colors are more vibrant and energetic while still maintaining a gothic, lightly macabre appeal that has made the doll franchise the popular collector's item.

The story, also written by Montesano and Zizik, once again revolves around Frankie's exploits. Though in the larger schemes of things, the tight-knit group of friends all participate in this misadventure about tolerance and laying to rest high-school grudges. In this respect, the plot, which technically precedes the events of "Escape from Skull Shores," aims to deliver the same moral message as above, which is quite admirable. Even more appreciated is that it never hammers the message to death, allowing it to naturally evolve and blossom through the narrative. Best of all is that the filmmakers use the animosity of werewolves versus vampires are the primary example for peace and acceptance.

Unlike some of the later entries, "Fright On!" is surprisingly enjoyable, incorporating horror tropes and mythologies that are familiar to adult genre but makes them child-friendly and relatable. Then, to make the story more engaging, the ghoulish fiends must overcome their differences and work together in order to quell a battle that's slowly brewing in the school campus. Van Hellscream, a human who is an expert on monster history and an obvious reference to Van Helsing, is largely responsible for stoking the flames of intolerance and manipulating Headmistress Bloodgood's good-intentioned attempts to be a disaster. For the little ghouls in the family, these early movies of the franchise are surprisingly quite charming.

Universal Studios Home Entertainment brings 'Monster High: Clawesome Double Feature' to Blu-ray as a two-disc combo pack with a code for an UltraViolet Digital Copy. A Region Free, BD50 disc sits comfortably opposite a DVD-9 inside a blue, eco-elite case with a glossy, lightly-embossed slipcover. A couple promo pieces for the franchise can be skipped at startup, and a menu screen with the standard options comes with full-motion clips and music playing in the background.

Both short animated films arrive to Blu-ray with an excellent AVC-encoded transfer, full of sumptuous, richly-saturated colors. Much of the palette mostly utilizes a vibrant array of softer pastel hues, but primaries remain bold and cleanly-rendered. Black levels are opulent with outstanding gradational details and dark, deep shadows that provide the video with great dimensionality. Contrast is spot-on and well-balanced, offering exceptional clarity from beginning to end. Despite the different animation style of the two movies, fine lines and objects are razor sharp and distinct throughout without a hint of aliasing or banding, making the 1.78:1-framed images a ghoulishly beautiful sight in high-def.

Unlike the video, the movies differ from each other noticeably yet are capable of delivering a pleasing and engaging DTS-HD Master Audio soundtrack. Most apparent is that "Fright On!" comes with a front-heavy presentation, which probably is none too surprising considering its production. Nevertheless, the soundstage is fairly broad and full of background activity that amusing and convincing, and "Escape from Skull Shores" also delivers a satisfyingly wide image. Dynamic range for both is distinct and detailed with excellent channel separation and clarity between the various sounds. Low bass is nothing exciting but weighty and appropriate nonetheless.

"Escape from Skull Shores" differs with a design that often employs the rear speakers, not only for the music but for subtle ambience and well-placed discrete effects. Overall, both tracks are enjoyable and sure to please the little ghouls of the family.

Other than previews, there are no special features.

Despite not being much of a fan, and having little interest in the franchise, 'Monster High: Clawesome Double Feature' turned out to be a pleasant surprise, with a pair of animated shorts focused on tolerance, acceptance and valuing each other differences. The Blu-ray arrives with an excellent audio and video presentation. Despite lacking supplements, the overall package is one fans will want to add to their collection.

Sale Price 2.44
Buy Now
3rd Party 30
In Stock.
See what people are saying about this story or others
See Comments in Forum
Previous Next
Pre-Orders
Tomorrow's latest releases