When a fashion photographer is contacted by his long-lost sister, who reveals she is living abroad in an isolated commune, he goes to visit her with a pair of journalists from the magazine VICE in tow. The community they find in the jungle, lorded over by a charismatic preacher known as "Father," is idyllic on the surface, but contains dangerous secrets.

Just how big does one have to allow his head to grow in order to feel so self-important as to put his name on another movie as if to garner more publicity and attention? I have to ask because for the last few years, Eli Roth has been slapping his name on other filmmaker's projects like that were some stamp of approval. Or, on a more deceptive note, which I also think is quite possible, his name followed by the verb "presents" might be intended to mislead general audiences, a deliberately subtle attempt at fooling viewers into believing the person directed the movie promoted. Granted, it's the same promotional practice inspired by Quentin Tarantino, but the difference is that Mr. Tarantino is an award-winning filmmaker who's earned the recognition to use his name as an advertising and marketing tool, whereas Mr. Roth is most certainly not.

Sorry to break it to you Mr. Roth, but in reality, your name as a promotional tool is as meaningless and empty as a hollow grave patiently awaiting its permanent resident, which, frankly is where your career belongs. His only claim to fame remains two rather average horror flicks, 'Cabin Fever' and 'Hostel,' neither of which changed or affected the genre in any meaningful way and both were done more for shock value than an engaging, scary story. And to be perfectly honest, they've pretty much fallen out of favor, if not been entirely forgotten by the general movie-going audience. Anyhow, the point of this, and how it relates to the reasonably well-made and decently effective 'The Sacrament,' is that Roth sticker bombing his name on this project is more of a distraction than anything else.

Thankfully, the relatively low-budget horror thriller from Ti West rises above the cheap publicity tactics — which ultimately amount to nothing more than Mr. Roth simply liking the movie — to be its own creature that doesn't resort to shock in order to entertain. The surprisingly satisfying chiller is a mildly provocative slow-burn that largely takes inspiration from the Jonestown Massacre of 1978, which at first glance doesn't seem like it would offer much in terms of scares. But West, who in my opinion has done quite nicely climbing through the genre ranks with amusing hair-raisers like 'The House of the Devil' and 'The Innkeepers,' competently and skillfully immerses his audience into a world of creepily quiet religious fanaticism. This isn't about developing jumps scares as much as creating a steadily-growing sense of panic. 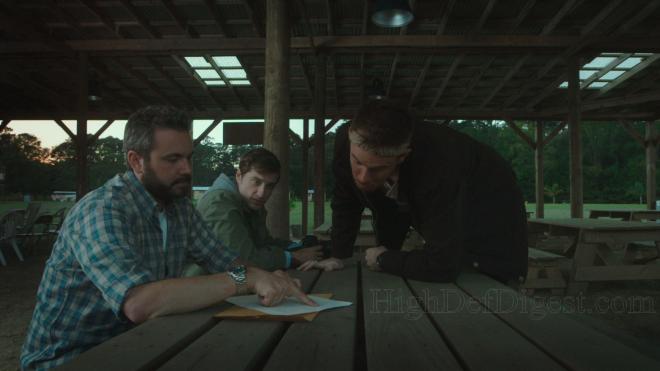 Of course, a sadly-familiar plot based on reality leaves little room for surprise, creating a feel of the filmmakers forcefully delaying the inevitable and obvious outcome, which one can easily guess from the previews alone. This then leads to a somewhat stale and tedious middle section, hurting the overall narrative slightly. Still, it's a necessary component to a story that follows a three-man team from Vice magazine, giving the film's found-footage style a basis for its existence, into the subtle fears of paranoia when spiritual fervor replaces reason and logic. Gene Jones is superb as the charismatic and persuasive leader of the secluded compound called Eden Parish, but Amy Seimetz is standout as the brainwashed follower in search of self-worth and purpose tending to Jones's every needs. Ignoring Roth's piggy-backing so as to remain relevant, Ti West's 'The Sacrament' satisfies with an eerily atmospheric thriller that slowly grows in tension.

Magnet and Magnolia Home Entertainment bring Ti West's 'The Sacrament' to Blu-ray on a Region A locked, BD25 disc inside a blue, eco-cutout case. After a few skippable trailers, viewers are taken to a menu screen with full-motion clips and music playing in the background.

'The Sacrament' consecrates Blu-ray with a 1080p/AVC MPEG-4 encode that seduces with potential while also revealing its darker, uglier side. Filmed entirely using inexpensive HD cameras, the picture suffers from that dour, sterile digital look often expected from such sources.

The whole freshly-minted transfer has an unattractive grayish cast that effectively, though probably not intentionally, limits the entire color palette. Thankfully, primaries are accurately rendered and true to life. Contrast is rather drab and lackluster, falling on the lower end of the grayscale, creating a 1.85:1 image that's flat and boring. This also affects black levels, which sometimes appears rich and true while at others dull and murky with average shadow delineation. The presentation's best aspect is the razor-sharp details and distinct, fine lines in the clothing, buildings and surrounding foliage with excellent lifelike textures in the faces.

Eden Parish makes a creepier impression with a satisfyingly haunting DTS-HD Master Audio soundtrack. The design makes excellent use of the surrounds, subtly creating a stirring and sometimes spine-chilling soundfield that's surprisingly immersive. Birds are heard chirping in the distance, leaves in the trees rustle with the gentle wind and the muffled whispers of parishioners gather all around the listener. The eerie but deliberately low-key score of Tyler Bates also bleeds into the back of the room to generate a spooky, sinister vibe throughout.

In the front soundstage, imaging is broad with awesome presence and warmth, excellent fidelity and outstanding balance between the channels. The mid-range exhibits sharp, well-defined acoustical details and separation in the highs, except for those few deliberate moments when the camera is knocked around or fall to the floor. Dialogue is precise and distinct in the center while the low-end shocks and amazes with unexpected weight and potency (Bass chart here), providing the music and few bits of actions with sturdy, convincing palpability, making this lossless mix a real pleasure.

Ignoring Roth's piggy-backing, Ti West's 'The Sacrament' satisfies as an eerily atmospheric thriller that slowly grows in tension. With excellent performances from Gene Jones and Amy Seimetz, the somewhat provocative horror flick does feel a bit dull at times, but overall, it's decently effective. The Blu-ray arrives with a very good but stylized picture quality while the creepy audio presentation surprises. Supplements are on the light side but amusing nonetheless, making the package reasonably priced for fans but a strong rental for the curious.

Sale Price 16.99
Buy Now
3rd Party 12.93
In Stock.
See what people are saying about this story or others
See Comments in Forum
Previous Next
Pre-Orders
Tomorrow's latest releases