Overview - Bargain hunters at Forest Ridge Mall get more than they bargained for: a chubby flasher in a ratty bathrobe. They’re repulsed. Security guard Ronnie Barnhardt isn’t: “This disgusting pervert is the best thing that ever happened to me!” Catching the flasher may be his ticket to a real police job and to romance with a hot cosmetics-counter princess. Only one thing stands between Ronnie and destiny: a tall, handsome cop who actually knows what he’s doing. Seth Rogen, Anna Faris and Ray Liotta star in this mall-to-wall comedy covering acres of wild, sometimes raunchy, up-in-your-grill funny – all under one roof.
OVERALL
Rent it First

Ouch… I just realized I may have inadvertently stirred up some unfavorable memories many of you were trying to forget. Well, the door is open now so I might as well keep going.

Anyway, take Kevin James' character from that lackluster comedy, roll him up in an R-rating, and strip away his innocence, sanity, and mere sliver of a funny bone, and what do you have? You're left with Ronnie Barnhardt (Seth Rogen) of 'Observe and Report,' quite possibly the worst film I've seen all year… and writer/director Jody Hill, that's a "boom" especially for you.

In this god awful waste of film and talent, the bipolar and sociopathic head of security at Forest Ridge Mall, Ronnie Barnhardt (Rogen), is an outcast of society and has a highly dysfunctional relationship at home with his alcoholic mother (Celia Weston). When a flasher unbuckles a reign of terror upon the female patrons at the mall, Ronnie sees it as the perfect opportunity to catch the pervert and impress the blonde bimbo at the cosmetics counter, Brandi (Anna Faris). The only problem is, Ronnie is a complete numbskull, and with a real cop like Detective Harrison (Ray Liotta) on the case as well, Ronnie may actually have to tone down his aggressiveness if there's any hope of beating Harrison to the punch.

Yes, I understand that 'Observe and Report' is supposed to be a black comedy and I've enjoyed a fair amount of black comedies during my lifetime, but man--this one is a total joke without a hint of a punchline. I think I laughed two measly times, once at the expendable twin line we also saw in the trailer, and the other one I'm not even going to mention simply because I don't want to spoil the only other witty part of the movie. The rest of the flick is comprised of bits that fall flat and go absolutely nowhere: Immature banter just for the sake of being vulgar (I wouldn't exactly call an entire argument of dueling "fuck yous" original). Neither are pathetic attempts to create a new catchphrase by calling waitresses "nurses." Well hellooo nurse… guess what? That isn't even remotely funny.

The main problem with the movie, though, is with the miscasting of Seth Rogen. I like Rogen, he's a very likable guy, and that's easy to see just judging from the bonus materials found on any of his movies. But here he ventures way off course taking the Ronnie Barnhardt character to such extremes that we don't care about him at all. I've seen plenty of movies where the protagonist has social or mental issues, yet we still are able to find something in them that makes us root for the underdog. Rogen is so ridiculously serious and over-the-top that the more I saw of his disturbing and revolting actions, the more I absolutely despised the guy. You can't laugh at someone you hate.

Worst of all, any chance of redemption for Ronnie is utterly butchered at the halfway point when Brandi becomes so high on pills and alcohol she doesn't know which way is up, and Ronnie pretty much date rapes her. That's right, date rape. I'm sorry, but I found that repulsively offensive and felt it really crossed the line--and if Hill came up with that idea and thought it was entertaining then maybe Forest Ridge's unhinged mall cop isn't the only one who should be seeking professional help.

Warner Brothers presents 'Observe and Report' on a single-layered BD-25 Blu-ray Disc that comes in a standard blue keepcase with a slipcover. The U.S. version of the Blu-ray release is also reported to be region-free and should function properly in all PlayStation 3 and standalone players. 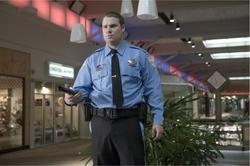 I've read two other reviews for 'Observe and Report' so far and one put the Blu-ray's 1080p/VC-1 (2.40:1 aspect ratio) encode on a pretty high pedestal, while the other expressed some disappointment with the transfer. I'm inclined to lean towards the latter's camp, unfortunately.

First and foremost, I feel the image just isn't as sharply defined as other newer releases and has a generally softer appearance. Details and texturing are solid, but not as strong to count pores on faces or the individual hairs on characters' heads. The picture has some dimensionality, but really only has that "pop" in exterior daylight scenes. Skin tones fluctuate from being quite natural to having a slight pinkish or yellowish tinge in places. It may be due to the lighting, but in one particular scene in the mall Anna Faris' skin actually matched her blond hair. The transfer has a bright and vivid color palette, the striking blues of the security uniforms are a good example, and black levels are deep and inky throughout. I didn't notice any banding, artifacts, or compression noise, just mild cases of crushing. Overall 'Observe and Report' offers a capable picture, but it definitely won't knock anyone's socks off. 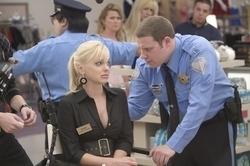 Warner offers a lossless English Dolby TrueHD 5.1 soundtrack on the Blu-ray, and similar to the video, the track is adequate, but doesn't really have anything to make it stand out from the crowd.

Dialogue is clean and intelligible, although I can't say the same for the jokes. The subwoofer chimes in occasionally and when it does it packs a powerful wallop, especially during gunshots at the shooting range and in most of the tunes populating the soundtrack. The music itself is loud and often jarring at times, but I guess it suits the Ronnie character just fine. The weakest element of the entire mix is that it's primarily front-channel heavy, with the surround activity being so subtle it's barely even noticeable. In the end, the soundstage has a constrained spread that feels like it's on a leash.

Since the standard-definition DVD is virtually a barebones release, all of the supplements are exclusive to the Blu-ray and therefore have been added into the appropriate section. 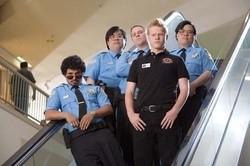 What more can I say? 'Observe and Report' is crude, inmature, and insults the viewers' intelligence. There's also a major problem when we can't warm up to the main character at all, and that in turn severely diminishes the impact of any potential comedy. Fans looking for supplements will only find them on this Blu-ray version, which does come with competent audio and video, but this is one film you have to enter at your own risk.

Sale Price 8.99
List Price 9.98
Buy Now
3rd Party 8.99
In Stock.
See what people are saying about this story or others
See Comments in Forum
Previous Next
Pre-Orders
Tomorrow's latest releases