When a group of rambunctious teenagers inadvertently kill his only son, Ed Harley (Lance Henriksen) seeks the magic of a backwoods witch to bring the child back. But when she tells him the child's death is irrevocable, his grief develops into an all-consuming desire...for revenge! Defying superstition, he and the witch invoke "the pumpkinhead" - a monstrously clawed and fanged demon which, once reborn, answers only to Ed's bloodlust. But as the invincible creature wreaks its slow, unspeakable tortures on the teens, Ed confronts a horrifying secret about his connection the beast - and realizes that he must find a way to stop its deadly mission before he becomes one with it forever!

Inspired by the poem from Ed Justin, 'Pumpkinhead' is the spooky tale of a corporeal vengeance demon that, according to one curious but very terrified boy, comes after those marked for doing something real bad. "Like keel'd sum-body." And in this wildly and unexpectedly entertaining supernatural flick, which itself marks the directorial debut of legendary special makeup effects artist Stan Winston, some city folk had done real bad to another's youngin'. While in a stupor driven purely by anger and heartbreak, that man visits an old, witch-like lady living in a rustic, wooden shack down a lonely, foggy road and asks that those meddling kids pay for what they done, making this both a sad and scary campfire story. That same night is the longest night of everyone's lives, as a seven-foot, lantern-jawed, swollen headed, cadaverous wraith prowls the forest inflicting violently-painful punishment to those who have committed wrong.

To the devoted fans of this cult horror favorite, the style and way in which audiences are told of this wonderfully original menacing monster is what makes the film creepily exciting, garnering a loyal following over the years since its theatrical release. From a script that took four writers, including Winston who, as the story goes, contributed by making the story darker than originally conceived, the delightfully spine-chilling tale is told like an urban legend, a local folklore of the Appalachian people believed as a means of scaring misbehaving kids into good little children. The decrepit, wrinkly, white-haired lady down the road, appropriately named Haggis (Florence Schauffler), is the only person with the power to summon the creature, but the locals pretend not to know. The "Demon of Vengeance," conceptually designed by Winston, derives its name from a neglected and dilapidated pumpkin patch where it sleeps until beckoned. 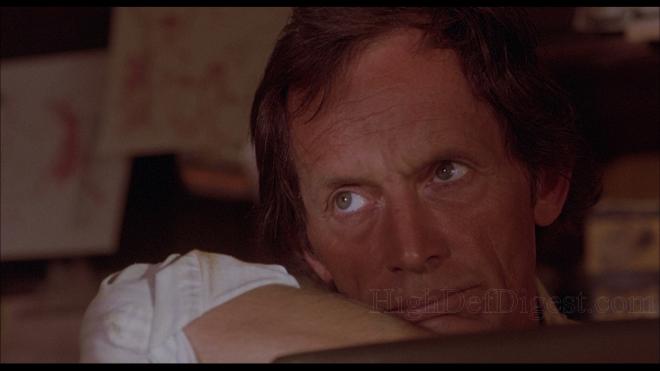 The man doing the beckoning is none other than the always awesome Lance Henriksen, the character actor with the cold, dead serious expression that surprises with lots of gravitas and emotional depth. As the farmer and owner of a small country store by the roadside Ed Harley, he effortlessly goes from happy-go-lucky country boy, all smiles and in great humor, to pathetically dispirited and incensed grieving father. His backstory is never fully detailed, but we learn just enough to understand that he's suffered plenty, raising his adorable son (Matthew Hurley) alone for the last couple years. After his unforgettable part in the 'Alien' series as the android Bishop and his equally memorable role in 'Near Dark,' Henriksen proved himself a terrific screen presence, carrying most of the film, aside from Pumpkinhead,' and the plot's emotionally engaging weight. A big part of the movie's attraction definitely goes Henriksen.

The loss of his son to the carelessness and selfishness of an arrogant motorcyclist (John D'Aquino) pushes our protagonist to the edge, where Henriksen ultimately shines best, making a terrible choice that he almost immediately regrets and tries to rectify. However, as the legend of Pumpkinhead explains, once summoned, absolutely nothing can stop it from completing what it was asked to do. Stan Winston does a marvelous job, along with his practical and mechanical effects team, in making the monster a formidable, unstoppable force, a creature that has since become an iconic figure of the genre in its own right. And with production design work by Cynthia Kay Charette and Kurt Gauger and the excellent cinematography of Bojan Bazelli ('Kalifornia,' 'The Ring,' 'The Lone Ranger'), Winston immerses his audience in a campfire tale full of spooky shadows and a stylishly gothic atmosphere, making 'Pumpkinhead' into a fun and terrifically memorable creature feature.

Shout! Factory summons 'Pumpkinhead' to Blu-ray as a Collector's Edition under the distributor's Scream Factory line. The Region A locked, BD50 disc is housed inside the normal blue case with brand new reversible cover art and a cardboard slipcover. At startup, the disc goes to a menu screen with full-motion clips while music plays in the background. Also, buying direct from the Shout! Factory website includes an exclusive poster of the newly commissioned artwork, available while supplies last!

Stan Winston's directorial debut takes vengeance on Blu-ray with a great-looking 1080p/AVC MPEG-4 encode that's true to the stylish, atmospheric intentions of the filmmakers. Very much on the dark side, engulfed in gloomy, ominous shadows which limit definition and clarity in most every nighttime sequence, the video is a marked and appreciated improvement to previous home editions. Only, viewers should keep expectations in check, as the results won't likely satisfy current HD demands.

The high-def transfer yields plenty to admire, full of deep, rich blacks and penetrating shadows. Contrast falls on the lower end of the scale while colors are cleanly rendered with accurate, bold primaries throughout. Fine object details are pleasing, and several scenes can be quite revealing, exposing pores in the faces and lifelike textures in the fabric of clothing. The high-def transfer won't compete with some of the best from the same period, but it's an upgrade that's sure to make devoted fans very happy with the results.

Customary to most releases in the Scream Factory line, 'Pumpkinhead' haunts the woods with two listening options, both presented in the DTS-HD Master Audio codec. To my surprise, listeners can't go with either choice: the upmixed 5.1 track or the original stereo design. Although the former maintains a front-heavy feel for a majority of the time, the rears are often utilized to expand the soundfield with very subtle ambient effects and good directionality, the cracking sounds of thunder and for enveloping the listener with the music of John D'Aquino. Naturally, the latter is all focused in the fronts, delivering that same background activity with flawless movement and panning between the cannels, generating a broad and nicely engaging image. Dynamics and acoustics are extensive with great detailed separation and clarity while low bass adequately provides a bit of weight and presence. With pristine, intelligible vocals in the center, both lossless mixes deliver great listening experiences.

With awesome creature effects, splendid production design and excellent cinematography, special makeup effects legend Stan Winston made his directorial debut with the cult supernatural horror favorite 'Pumpkinhead.' Starring Lance Henriksen, and told as a folkloric campfire tale, Winston immerses his audience in spooky shadows and a stylishly gothic atmosphere, making the film a terrifically memorable creature feature. The Blu-ray arrives with excellent picture quality, given the deliberate photography, and a strong audio presentation. With a healthy collection of supplements to boot, the overall package makes for an awesome collector's item for loyal fans, while neophytes will want to give it a rent first.

Sale Price 14.99
Buy Now
3rd Party 9.98
In Stock.
See what people are saying about this story or others
See Comments in Forum
Previous Next
Pre-Orders
Tomorrow's latest releases