It's not hard to envision the early life and success of Elvis Presley as some wild extension of the American Dream. Superficially at least, Presley fit the basic tenets; he came from humble beginnings to achieve incredible success and reap the benefits of his labors.

By 1962, however – the year that his light-hearted romp, 'Follow that Dream' was released – it could be argued the social ideal at the heart of the film had already begun to morph into a fixation with celebrity, which, in turn, made Presley into an even more powerful representation of it. As such, this cozy charmer, based on the 1959 novel 'Pioneer, Go Home!' and directed by Gordon Douglas, wound up becoming an amusing take on the notion of the American Dream at a time when the idea of what constituted prosperity began to be interpreted differently.

Presley stars as Toby, the charming, easy-going son of Pop Kwimper (Arthur O'Connell), a deeply principled man who, despite his advancing age has basically adopted three other children – including the young, clever Holly (Anne Helm) and twin boys who are little more than window dressing to the plot. 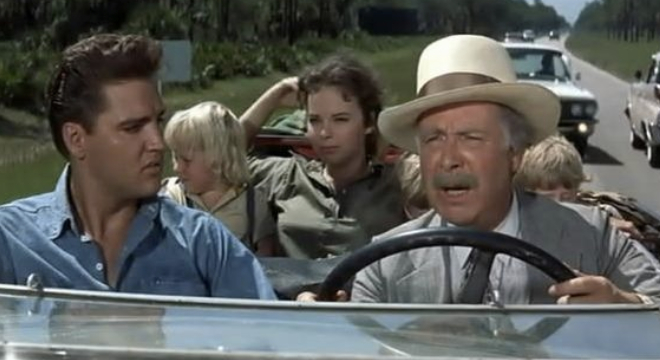 The Kwimper clan is making their way West – Clampett-style – when an ill-advised drive on a government road and an empty gas tank results in their becoming improbable homesteaders. At first the homestead operation is little more than an attempt to spite a nosy government official who happened to rub Pop the wrong way. But not long after the Kwimpers have turned their ramshackle camp into a full-fledged home on the beach – complete with electricity and plumbing from who knows what source – the family tacitly decides Florida may as well be the land of opportunity they were searching for.

Naturally, the government official doesn't take kindly to the Kwimpers' advantageous use of a legal loophole, making their homestead untouchable, so he sends in a vivacious welfare worker played by Joanna Moore in an attempt to seduce the naïve Toby – which only serves to rankle young Holly and cause the Kwimper clan to dig their heels in deeper. To make matters worse, in another bit of loophole wrangling, a trio of gangsters in a traveling casino (which is a thing, apparently) take up next to the Kwimper homestead, causing the family no end of grief with the loud, late-night carousing and gambling.

While Holly attempts to manage the family's burgeoning fishing business, Pop works on making the outhouse safe for those who dare flush, and the twins do…something, Toby winds up becoming sheriff of the little beachfront hamlet as a way of legitimizing their homestead and rousting the gangsters who've made themselves far too comfortable.

Through Presley's encounters with the gangsters, played by Simon Oakland and the great Jack Kruschen ('The Apartment,' 'McLintock!'), as well as a nervous bank employee played by Howard McNear – a.k.a. Floyd the barber on 'The Andy Griffith Show' – 'Follow That Dream' earns its place as a funny, charming film that plays to Elvis' strong suits as both an actor and as a musical performer. There's little sense that Presley is playing anything but a slightly inexperienced version of himself, and that's okay.

Toby's innately good-natured personality leads him to believe in the good in everyone he meets, and yet that still doesn't make him an easy target for those looking to take advantage. When the situation with the gangsters comes to a head, after they call in an out of town assassin to do away with the meddling Kwimper clan, director Douglas doesn't let the gravity of the situation transform the film's accessible tone into something dark and foreboding. Instead, he uses it to highlight the ways in which Toby's genial disposition is an asset to everyone around him, even those planning to do him harm. The slapstick scene with three confused gangsters and one young, inexperienced sheriff plays like it belongs in a film from twenty years earlier, seemingly cementing the film in its appreciation of a bygone era.

And that, despite its airy, relaxed nature is the crux of 'Follow That Dream.' It is a film that wants as much to highlight the many attributes of its youthful, talented star, as it does the notion of what makes America the kind of place capable of producing a talent like Elvis Presley. By the time the film approaches its denouement, with the Kwimpers facing off against the powers of the state government, it's clear that the story is, at the very least, aware such quaint ideas as the American Dream cannot last forever.

Thankfully, that wistfulness is subtle, as Douglas gives every scene a shot at playful earnestness that helps to make 'Follow That Dream' a charming, overlooked piece of Presley's film catalogue. 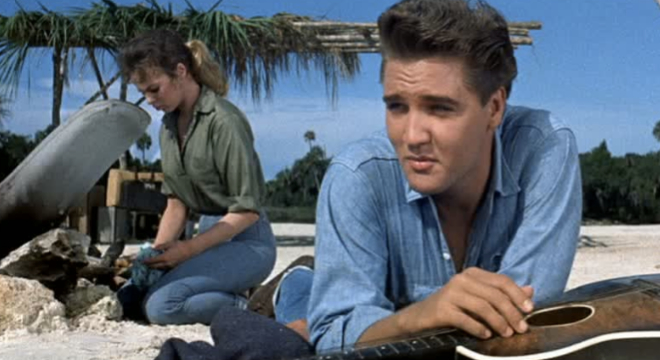 'Follow That Dream' comes from Twilight Time as one of a 3,000 copies. It is a 50GB Blu-ray disc in the standard keepcase, accompanied by the also-standard, very well written essay by film critic Julie Kirgo.

The 1080p AVC/MPEG-4 encoded transfer produces a bright, colorful image that is maintains a high level of detail and texture despite the film's age.

Grain is present throughout, but it is never an issue. Instead it gives the image more of a filmic quality that displays its age proudly. Fine detail is present in most close-ups and lessens to a certain degree, depending on how wide the shot is. Most of the time, any decrease in detail is not immediately noticeable, and rarely does it have an impact on the overall presentation of the film. Textures are handled similarly. Clothing and other elements tend to look terrific up close, and somewhat flatter from farther away. Again, this feels natural given the film's age, and the fact that the image rarely looks to be suffering from soft focus helps to maintain the semblance of quality.

Contrast is good for the most part, as the image seems to handle shadows and blacks better than the hot whites. Blacks are strong, but due to the way the movie was filmed, even in the dead of night, the area is lit up like its high noon. Perhaps because of this, actual daytime scenes can look too bright. Thankfully, this isn't much of an issue, as it helps to convey the heat of the Florida sun. Color is strong as well, as the brightness of the image helps blues, reds, and greens stand out remarkably well.

Overall this is a strong image that manages to overcome its minor flaws.

The DTS-HD Master Audio 1.0 mix does a terrific job of presenting a surprisingly rich and deep audio that handles dialogue wonderfully, and even delivers Elvis' signature songs in a layered fashion.

Dialogue comes through cleanly and distinctly, and yet it manages to chare the single channel with things like music and sound effects without any distortion. Balance seems to favor the dialogue for the most part, as other elements will decrease in volume almost imperceptibly when a character begins talking.

There's not much in the way of ambient noise or atmosphere, but the mix manages to make due with what it has at hand. Settings generally manage to represent themselves adequately, but for the most part ambient elements are few and far between.

This is a solid if unremarkable audio mix.

Though thought of as one of Elvis' lesser films, 'Follow That Dream' has a lot of life and charm, both of which go a long way in making its sometimes-nonsensical aspects more palatable. Elvis exudes a casual kind of charm throughout the film that seems to relax expectations in a way that doesn't feel lazy, just confident and warm. The image is really quite nice, and the sound is strong, though unimpressive. Overall, this one comes recommended.