John Wayne stars as George Washington McLintock, a proud, defiant cattle baron whose daughter is due home from college. But G.W.'s happy reunion is tempered by the arrival of his headstrong wife (O'Hara), who recently left him.  Verbal fireworks explode, slapstick pratfalls bloom…and the Wayne-O'Hara "reconciliation" culminates with the notorious "spanking" scene and the biggest mudhole brawl this side of the Mississippi in this wild, raucous and hilarious Western comedy!

While John Wayne may be one of the first things to come to mind when thinking of the Western genre, the idea of slapstick comedy may not necessarily be the second. And yet, in 1963, when Wayne was at the zenith of his stardom and as the living embodiment of the ideal, rugged American cowboy, the actor re-teamed with Maureen O'Hara for the bright, raucous, and playful take on the Western comedy, 'McLintock!'

Itself a take on Shakespeare's 'The Taming of the Shrew,' 'McLintock!' features Wayne at full power of his commanding screen presence, as George Washington McLintock (G.W. to his friends) an inordinately wealthy cattle baron and land owner who has set up shop in New Mexico, where he busies himself with the day-to-day dealings of running his business, drinking copious amounts of alcohol, hanging with his buddies, and seeing to the townspeople that have largely come to stake their claim on the American Dream, partially by buying into the notion that McLintock's success can be theirs too. Things aren't all rosy for G.W., however, as he hasn't seen his obstinate wife Katherine (O'Hara) for two years, after she left him with little explanation as to her sudden, overwhelming disdain for her husband and the town he'd essentially built around himself. All that changes when their daughter Becky (Stefanie Powers) finds herself due home from college, prompting an unlikely and argumentative family reunion that's set against the backdrop of the ongoing strife between several Native American tribal elders and the U.S. Government.

Initially, 'McLintock!' takes its time setting up the world of G.W., by surrounding him with a terrific ensemble of character actors that includes Jack Kruschen ('The Apartment'), as local shopkeeper Jake Birnbaum, Chill Wills as Drago, G.W.'s sweet natured right-hand man, and even Wayne's real-life son Patrick, as Devlin Warren, the strapping, but slightly indignant young man who is initially willing to fight the seemingly invincible McLintock for a job. The introduction of Devlin paves the way for Yvonne de Carlo to play his attractive mother Louise, who soon becomes the head cook of house McLintock, and gives Becky's would-be suitor played by Jerry Van Dyke, a run for his money. 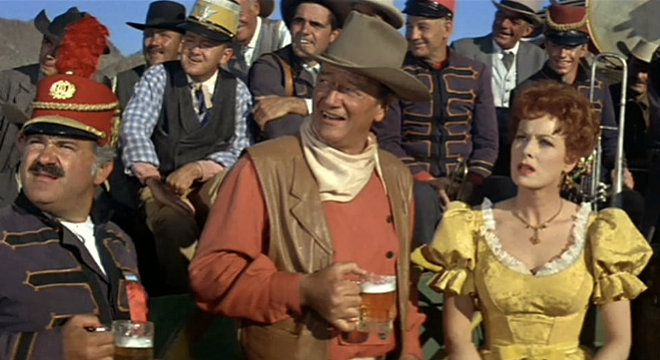 The charming dynamic of the sizeable assembly is threatened with Katherine's sudden arrival shortly before Becky returns home. At first, Katherine insists that G.W. grant her a divorce, so that she can continue to enjoy the romantic overtures of Governor Cuthbert H. Humphrey (Robert Lowery), and apparently other men, thanks to her newly acquired taste for a fashionable, socialite life far away from the isolation of G.W.'s New Mexican ranch. But she soon settles into old habits and begins to reminisce about her life before the upheaval that sent her to the big city. Here, the boisterous Wayne-O'Hara interplay from 'The Quiet Man' is on full display, as the couple's inability to communicate with one another often erupts in grand expressions of violence against others, as is most readily seen in the boisterous battle above a mudhole in which G.W. tries to prevent some unwarranted vigilante justice from taking the life of an elderly tribal leader.

There is a strange disconnect in the scene as it is played entirely for laughs – including the near indecipherable speech of the tribal leader in question – without much in the way of follow-up regarding the plight of the Native Americans and the U.S. Government's insistence on manifest destiny. This is seen again later on, when G.W. is asked by a Puma (Michael Pate) to speak on behalf of the imprisoned tribal elders and the Native American people as a whole. And yet, despite the presence of such a politically charged thread, 'McLintock!' doesn't take that part of itself too seriously. Puma and the rest of his people allow for brief pauses in the contentious relationship between G.W. and Katherine, and are, for all intents and purposes around solely to demonstrate McLintock's innate sense of justice, which, apparently doesn't necessarily extend to women and only does to Native Americans in terms of giving them a fighting chance – i.e., an opportunity to go out in a blaze of glory. And, for the most part, that's where the film's primary concern lies: With the idea of Western masculinity as a dominant force in an age that prized the achievements of men above all else.

In that sense, 'McLintock!', now fifty-one years removed from its initial release, serves as a dual time capsule: That of the nineteenth century West, and that of American film in the 1960s. As such, the male-female dynamic on display creates an interesting tension from an historical and cultural studies perspective, and, more decidedly, a feminist one. Looking at the film critically from the latter point of view becomes especially telling as the film flies into its third act. There, after nearly two hours of comedic infighting regarding the why of Katherine's departure and sudden hatred of her husband, 'McLintock!' eschews a cohesive resolution to the narrative for a one-sided affair that revolves around G.W.'s need to settle things once and for all by chasing his estranged wife around town, through windows, and off roofs all so he can give her a spanking in public. The ensuing hurried denouement sadly offers little in terms of a satisfying conclusion and severely undercuts the first two-thirds of the film by regarding the "hilarious" degradation of Katherine as a meaningful resolution to a story whose tension was built primarily around her well-founded reasons for leaving G.W. in the first place.

Ultimately, that leaves 'McLintock!' as little more than a fun, boisterous film that, for good or bad, says as much about the uneven battle of the sexes in the era it is depicting, as it does about the time period in which the film was made. 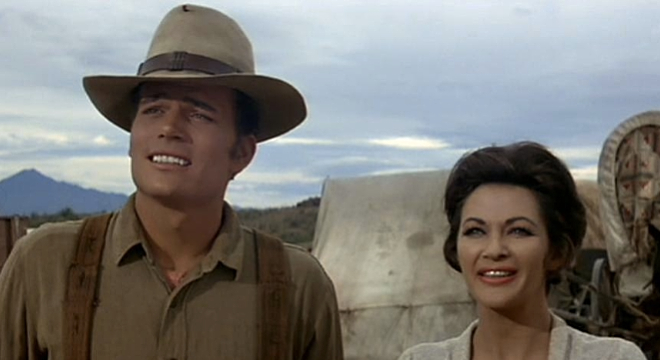 'McLintock!' comes from Paramount as a single 50GB Blu-ray disc in the standard keepcase. The disc does not contain any previews, so it will jump directly to the top menu. From there, you can choose to view the film, or check out some of the special features.

'McLintock!' comes with a 1080p AVC/MPEG-4 encoded transfer that presents what appears to be a meticulously remastered image with great amounts of fine detail and bright, Technicolor appeal. The image looks fantastic in almost every scene. Colors are incredibly bright and vivid, giving the whole film a charming aesthetic that plays up the importance of various shades and colors like blue, yellow, and most obviously, red. In addition, the image is filled with a surprising amount of fine detail that is shown in the fine facial features and textures of the costumes and the film's set dressings.

Grain has been dramatically reduced, but not to the detriment of the picture itself. There is still the presence of filmic quality grain brings, but it doesn't overwhelm the image, or get in the way of the fine detail. Additionally, there is no evidence of scratches, dust, or other unwanted elements that would otherwise mar the image. Contrast is also high throughout. Black levels are strong, free of crush and banding, and otherwise serve to create a strong separation between the light and dark elements when the need arises. White levels are evenly balanced, as the picture manages to be bright without looking washed out or dull.

This is a wonderful looking disc that will certainly please longtime fans of the film.

The Dolby TrueHD 5.1 mix mostly does a nice job of bringing the cinematic grandeur of the film to life. The score is as big and boisterous as Wayne himself, and the sound effects are all resonant in their own way. Mostly, though, this is still a dialogue-driven film, and the dialogue is clear and precise, even if it loses some of its power when in direct competition with the other elements of the mix. In these cases, the balance seems to favor the score and the sound effects, giving the dialogue a slight but noticeable drop in volume on certain occasions.

Otherwise, the sound does at least attempt something close to an immersive quality and although it doesn't quite succeed in creating immersive atmosphere, it does have some surprising qualities despite the film's age. Busy moments such as the mudhole brawl, and the later sequence during the town's celebration utilize the various channels at their disposal with unexpected depth and range, offering a listening experience that will likely please fans of the film.

The Making of 'McLintock!'

The Corset: Don't Leave Home Without One! (SD, 8 min.) – Louise Coffe-Webb, a fashion curator at Woodbury University gives an informative discussion about the corset and its role in history.

2-Minute Fight School (SD, 2 min.) – Tom Morga and Wayne Bauer give a basic lesson in how to perform a quick, good-looking fistfight, Hollywood-style.

It is far from being a classic, and it certainly will be considered by many to be distasteful for its depiction of patriarchal authority over women and minorities, but despite those flaws, there is still some charm to be found in 'McLintock!' if, for nothing else, the appeal of its leading man and his undeniable chemistry with Maureen O'Hara. The film looks gorgeous, and although the sound is only better than average, there are some interesting (albeit recycled) special features that will certainly be of interest to fans of the film. 'McLlintock!' comes recommended.

Sale Price 12.02
List Price 21.99
Buy Now
3rd Party 12.01
In Stock.
See what people are saying about this story or others
See Comments in Forum
Previous Next
Pre-Orders
Tomorrow's latest releases