A splashy Technicolor western directed with plenty of noir touches by the great Fritz Lang, Rancho Notorious stars a sultry Marlene Dietrich as the proprietress of an outlaw hideout who's torn between a dashing marauder (Mel Ferrer) and a cowboy (Arthur Kennedy) seeking vengeance for the brutal slaying of his fiancée. Warner Archive's sumptuous transfer, struck from a new 4K scan of the original nitrate negative, and solid audio revitalize this fun, decadent film that Dietrich devotees will certainly want to add to their collection. Recommended.

Fritz Lang is best remembered for directing some of Hollywood's finest film noirs, but he also helmed a few westerns. Though none of them remotely rival the work of John Ford, Lang's bold style bolsters their appeal. The most noteworthy of the bunch is the provocatively titled Rancho Notorious, one of the rare westerns to feature a female protagonist tough enough to go toe-to-toe with the cocky cowboys who cross her path. Lang seasons his brew with some spicy noir accents and sweetens it with Technicolor eye candy, but it's Marlene Dietrich who supplies the meat and potatoes that nourish this middling yet still tasty film.

As its oft-repeated theme song "The Legend of Chuck-a-Luck" continually reminds us, Rancho Notorious is a tale of "hate, murder, and revenge" that chronicles the dogged efforts of Wyoming ranch hand Vern Haskell (Arthur Kennedy) to track down the vile man who raped and killed his fiancée. Dietrich plays the sultry, gutsy Altar Keane, a former showgirl who now runs the Chuck-a-Luck, a comfy hideout for outlaws nestled in a remote valley. In return for a percentage of their loot, Altar gives shelter to the criminals, one of whom is Frenchy (Mel Ferrer), a rogue who romances Altar in between robberies and jail stints. Vern befriends the gunslinger and tries to infiltrate the gang holed up at the Chuck-a-Luck in the hope of finding his fiancée's assailant. 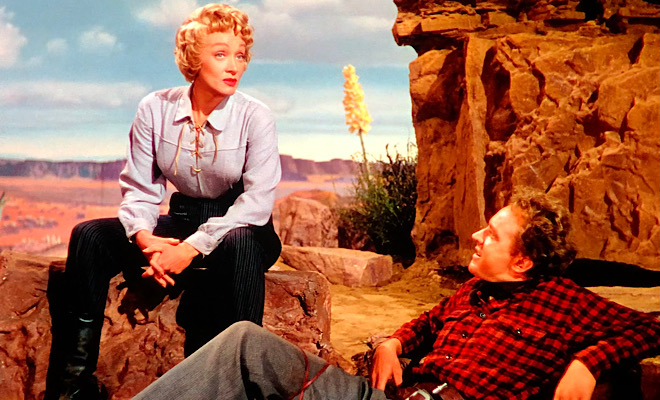 Rancho Notorious pales in comparison to Johnny Guitar (another feminist western in which Joan Crawford and Mercedes McCambridge chew up and spit out Sterling Hayden and Ernest Borgnine), but enough action and underlying tension courses through it to keep us involved. The script by Daniel Taradash, who would earn an Oscar the following year for his adaptation of From Here to Eternity, is peppered with colorful quips, heated exchanges, and some welcome whimsy, and the rich cinematography of Hal Mohr, who photographed Dietrich a dozen years earlier in Destry Rides Again, almost masks the movie's cheap look.

Rancho Notorious puts Dietrich in the same milieu as Destry, and though it lacks the bawdy humor and kinetic energy of that classic 1939 western, Lang's film often feels like a follow-up. Interestingly, both movies feature a lead character named Frenchy. In Destry, it was Dietrich; here, it's Ferrer, although the New Jersey-born actor hardly seems European. (Maybe the moniker refers to his romantic prowess.) Despite their 16-year age difference, Ferrer and Dietrich make a believable on-screen couple, probably because the 50-year-old actress demanded favorable lighting and camera angles. Dietrich's insufferable vanity reportedly disrupted production and enraged Lang, causing an irreparable rift between the two. 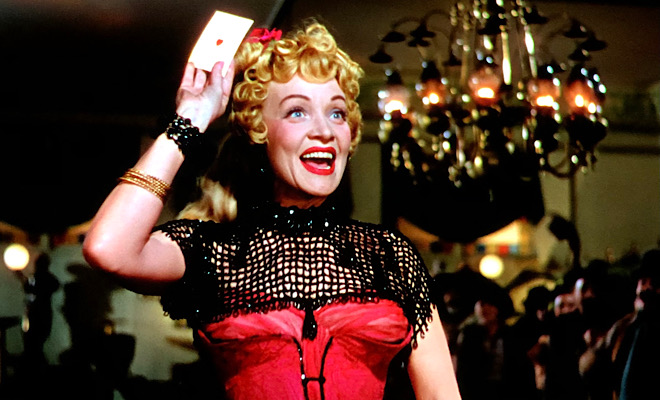 Kennedy, who had just come off a Best Actor Oscar nomination playing a blind WWII vet in Bright Victory, brings his usual intensity and commitment to his one-dimensional part, and a lively supporting cast that includes William Frawley, who would soon begin playing Fred Mertz in a new TV sitcom called I Love Lucy, and future TV Superman George Reeves perks up the proceedings, too. (In a bit of irony, the "Legend of Chuck-a-Luck" theme song references a "man of steel." Granted, the line refers to Kennedy's character, but in retrospect it's an amusing coincidence, considering the Superman TV series starring Reeves would premiere just six months after the release of Rancho Notorious.)

Rancho Notorious never will be considered a top-notch western, but it has its niche as a rare feminist entry in a masculine genre. Though Dietrich dons plenty of frilly finery, she also wears the pants in this movie, commanding the screen with the imperious air of an indomitable diva. Lang's film languishes whenever she's not around, but the sparks she supplies sustain Rancho Notorious and make it an entertaining diversion for classic movie and western fans. 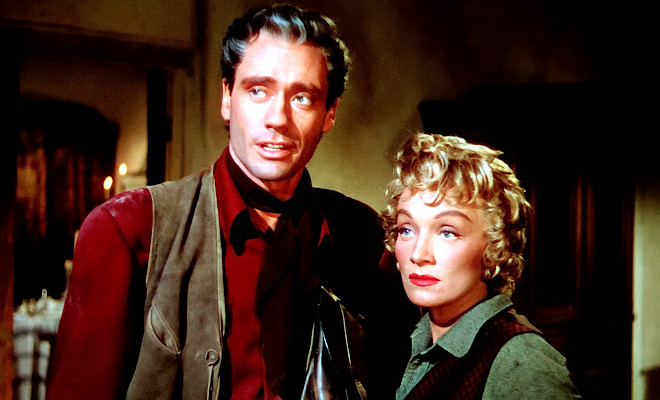 Vital Disc Stats: The Blu-ray
Rancho Notorious arrives on Blu-ray packaged in a standard case. Video codec is 1080p/AVC MPEG-4 and audio is DTS-HD Master Audio 2.0 mono. Once the disc is inserted into the player, the static menu without music immediately pops up; no previews or promos precede it.

A new 4K remaster struck from the original nitrate Technicolor negative produces a staggeringly gorgeous 1080p/AVC MPEG-4 transfer that faithfully honors the lush cinematography of two-time Oscar winner Hal Mohr. Don't be shocked by the black-and-white RKO logo that pops up at the start of the film (and don't adjust your TV settings!)...the screen becomes awash in sumptuous Technicolor hues once the opening credits begin to roll. Though grain is almost completely absent, Rancho Notorious still exudes a lovely film-like feel and the breathtaking clarity, pitch-perfect contrast, inky blacks, bright whites, and excellent shadow delineation produce an image that brims with detail and depth. The picture is so sharp the painted scenic backdrops and red rock set pieces look more artificial than ever before, but that's a small price to pay for such visual splendor. 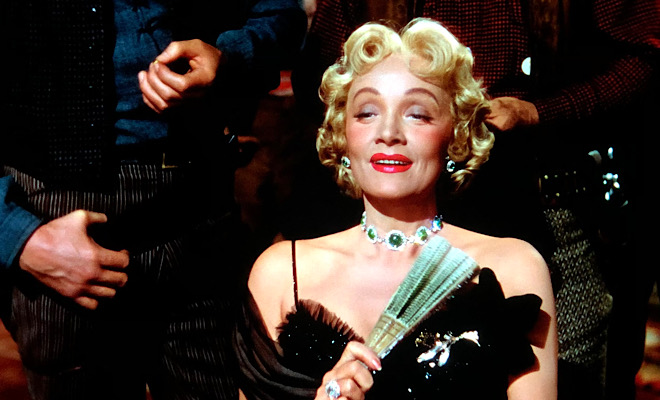 Costume textures and all the atmospheric bits of western decor are crisp, the day-for-night sequences look especially good, and man-oh-man those close-ups! Few Hollywood stars in their 50s flaunted glamor and allure like Dietrich and the tights shots here show her off to terrific advantage. (The scruffy, ruddy faces of Kennedy and Ferrer look great, too, and check out those scars on George Reeves' cheek!) Bold reds, Dietrich's gleaming emeralds, the deep blue sky, both the natural and manufactured orangey rocks, and an array of pastels form the arresting color palette that keeps the eye engaged when the plot sputters. Like Dietrich, the movie looks ageless, thanks to an antiseptic source print that's devoid of any nicks, blotches, or scratches. A bit of softness creeps in now and then, but can't dull the impact of or my enthusiasm for this spectacular Blu-ray presentation.

The DTS-HD Master Audio 2.0 mono track supplies clear, well-balanced sound. All the dialogue is easy to comprehend and a wide dynamic scale embraces all the highs and lows of Emil Newman's rousing music score, Dietrich's sultry vocals on the torch song "Get Away Young Man," and Bill Lee's resonant baritone on the recurring "The Legend of Chuck-A-Luck" ballad without any distortion. Sonic accents like gunfire, fisticuffs,  and galloping horse hooves are crisp, and no age-related hiss, pops, or crackle intrude. Though not as active as some western tracks, this mix makes up in fidelity and tonal depth what it lacks in power.

Sadly, there are no supplements, not even a trailer.

The provocative title may promise more than it delivers, but Rancho Notorious remains an entertaining revenge western that gives Marlene Dietrich plenty of opportunity to strut her inimitable stuff. Arthur Kennedy and Mel Ferrer provide macho support and director Fritz Lang supplies essential style and some noir accents, but none of them can steal Marlene's thunder. No extras, but with a five-star transfer struck from a 4K scan of the original nitrate negative and robust audio, who needs them? Once again, Warner Archive rescues a minor classic and gives it a major makeover. Recommended.