An inspiring, touching, and understated film that chronicles the rehabilitation and enlightenment of a GI who loses his sight in World War II, Bright Victory examines potent issues with insight and grace and features a bravura, Oscar-nominated performance from Arthur Kennedy. A brand-new 2K remaster revitalizes this long-neglected film that's directed with sensitivity and nuance by Mark Robson. Solid audio and a fine commentary track enhance Kino's Blu-ray presentation of a movie that deftly mixes drama with important themes. Recommended.

Almost every classic film fan has seen Dark Victory, the enduring Bette Davis weepie about a spoiled socialite who learns to accept the inevitability of blindness and death after receiving a terminal diagnosis, but only a select few have likely heard of Bright Victory, an equally inspirational tale about a GI's struggle to rebuild his life after a wartime assault blinds him. Why director Mark Robson's film, which received two Oscar nominations, doesn't enjoy a loftier reputation today remains a mystery, but its sensitive, forthright treatment of a difficult subject, unflinching examination of hot-button themes, and excellent performances make rediscovering this little-known classic a joy.

While tending to a dead soldier in North Africa in 1943, Sgt. Larry Nevins (Arthur Kennedy) gets struck in the temple by a German sniper's bullet and loses his eyesight. The destruction of such a vital sense devastates Larry and he contemplates suicide, but once he begins rehabilitation at a Pennsylvania army hospital that specializes in blindness, he strives to become self-sufficient and resume as best he can his normal civilian life. His primary goal is to return to his Southern hometown, marry his fiancée (Julie Adams, billed here as Julia), and take a cushy job in her rich father's business, but of course he's nervous about how he'll be accepted and treated once he's cleared to make the trip.

Things get a bit complicated, though, when Larry meets Judy Greene (Peggy Dow), a local Pennsylvania girl who spends her free time helping the blind veterans readjust. After an initial frosty introduction, sparks fly between them, but the preoccupied Larry has trouble "seeing" Judy as more than a loyal friend until his eyes are opened by a homecoming that doesn't quite go as he planned. 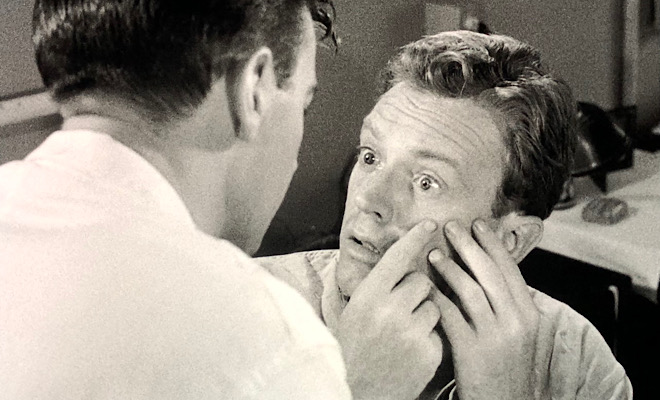 By the time Bright Victory premiered in 1951, Hollywood had already addressed the disabilities of returning World War II vets and the challenges they faced adjusting to civilian life in a couple of noteworthy films. The Oscar-winning The Best Years of Our Lives looked at the plight of amputees, while The Men, which introduced Marlon Brando to moviegoers, chronicled the struggles of paraplegics. Bright Victory's approach to blindness is no less insightful or emotionally affecting. Employing a semi-documentary style and shooting many scenes on location at the Pennsylvania hospital devoted to treating and rehabilitating blind veterans, Robson provides a step-by-step account of the training the vets receive and the hurdles they must scale before they're granted re-entrance into society. It's a rigorous, regimented program and Robson depicts it with clinical efficiency.

The script by Robert Buckner, who received an Oscar nomination for his original story for the George M. Cohan biopic Yankee Doodle Dandy, does a good job examining the insecurities and anxieties that plague Larry and his fellow blind vets as they wrestle with such issues as self-sufficiency and manhood. It also doesn't sugarcoat the varied reactions of family and friends to Larry's disability or how their attitudes toward him shift - consciously or not - once he comes home. Though most everyone expresses love and support for Larry, it's tough for them to conceal their disappointment, uncertainty, and pity over his affliction.

We expect Bright Victory to remain laser-focused on Larry's blindness throughout, so it comes as a shock when the film boldly and effectively addresses racism midway through the story. When Larry learns Joe (James Edwards), his best friend at the hospital, is black, his inbred Southern prejudices rise to the surface and he instantly shuns his buddy. It's a devastating moment made all the more repugnant by Larry's cavalier use of the n-word. As Larry experiences forms of prejudice back home due to his loss of sight, he gradually learns to become color blind, and it's that evolution - even more than Larry's ability to embrace and take charge of his life despite his disability - that lends Bright Victory power and resonance. The film also deserves kudos for taking such a resolute stance on a controversial issue a few years before the dawn of the Civil Rights Movement. (In 1949, Robson also directed another sober examination of racism, Home of the Brave, which deals with discrimination within the ranks of the U.S. military.) 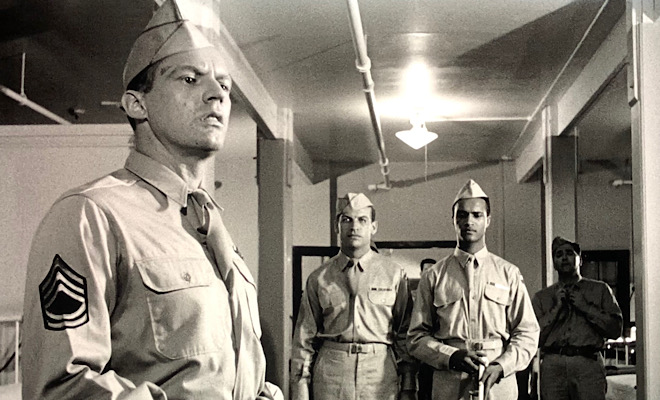 Kennedy, one of the finest actors who never became a bona fide Hollywood star, earned a well-deserved Best Actor Oscar nomination for his natural, nuanced performance. (Though he lost the award to Humphrey Bogart for The African Queen, the New York Film Critics Circle named Kennedy Best Actor over Marlon Brando in A Streetcar Named Desire.) At times resembling a young Kiefer Sutherland, Kennedy brilliantly evokes Larry's blindness and subtly yet searingly expresses his bigotry. He also exhibits the wide range of emotions that course through someone who must face, accept, and rise above such a severe disability. Kennedy rarely strikes a false note and carries Bright Victory with a confidence that belies his diminutive status in the Hollywood hierarchy.

The supporting cast is equally fine. I recently raved about Dow's work in the riveting film noir Shakedown, and she's just as good here, exhibiting quiet strength and boundless empathy as the loyal Judy. (Only months after Bright Victory's premiere, Dow would retire from acting at the tender age of 23, ending a promising career.) In other roles, Adams also shines as the girlfriend who's not sure she'll be able to handle Larry's blindness till death do they part; Edwards excels as the gentle, affable Joe (his reaction to Larry's racial slur is heartbreaking); Richard Egan impresses as another blinded vet who helps Larry find his way; and such reliable character actors as Jim Backus, Will Geer, and Minor Watson assert themselves well. In addition, a young Rock Hudson shows up in a brief bit in the opening scene as one of Larry's fellow GIs who comes under fire by the German snipers.

Bright Victory treats a couple of difficult subjects with honesty, sensitivity, and grace. This modest, understated film still wields considerable power despite a few dated clichés, and inspires intense admiration for soldiers then and now who face unfathomable challenges and meet them with courage, dignity, and an iron will. Kino once again deserves commendation for unearthing a lost gem and giving it a quality Blu-ray release. Far more uplifting than Dark Victory, Bright Victory not only opens our eyes, it opens our hearts and minds as well. 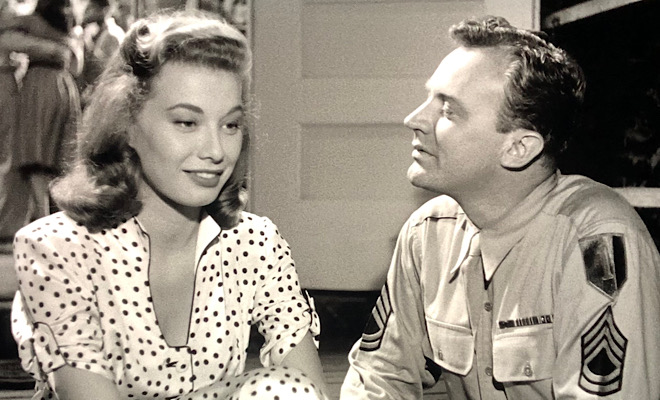 Vital Disc Stats: The Blu-ray
Bright Victory arrivals on Blu-ray packaged in a standard case. Video codec is 1080p/AVC MPEG-4 and audio is DTS-HD Master Audio 2.0 mono. Once the disc is inserted into the player, the static menu with music immediately pops up; no previews or promos precede it.

A brand-new 2K master yields a pleasing 1080p/AVC MPEG-4 transfer that features excellent clarity and contrast and faithfully honors the cinematography of the great William Daniels. A couple of very jarring ripped frames early in the film and a few missing frames throughout disrupt the narrative spell, but aside from those unfortunate anomalies, the source print is quite clean, with only a few nicks, blotches, and faint vertical lines occasionally dotting the image. Exteriors run a bit hot, especially during the opening sequence, but the picture is otherwise well balanced, with a natural grain structure, deep blacks, bright yet stable whites, and nicely varied grays producing a vibrant, detailed, film-like presentation. Some scenes sport some softness and excessive texture, but that's to be expected from a film of this vintage. Background details are easy to discern, costume fabrics are crisp, and sharp close-ups highlight Kennedy's rugged complexion and Dow's fresh-faced loveliness. Though not a dazzler, this very solid transfer serves this long-neglected film well and should delight fans.

The DTS-HD Master Audio 2.0 mono track supplies clear, well-modulated sound and is devoid of any age-related hiss, pops, or crackle. Atmospherics like chirping crickets and the din of city streets are crisply rendered, as are sonic accents like honking horns, gunfire, ringing telephones, and the sound of Larry's cane tapping the sidewalk as he ventures into the outside world. A wide dynamic scale handles all the highs and lows of Frank Skinner's understated music score without any distortion, and all the dialogue is well prioritized and easy to comprehend. Bright Victory received an Oscar nomination for Best Sound Recording, and this vibrant track shows us why.

In addition to a few trailers for other Kino Lorber Studio Classics releases (sadly, no preview for Bright Victory is included), the only extra is an audio commentary by film historian and screenwriter Gary Gerani. Gerani expresses his reverence for Bright Victory throughout his discussion, which includes an array of cast and crew bios, a look at the differences between the source novel and film adaptation, and analysis of the characters and themes. Gerani's enthusiasm for the movie and admiration for those involved with its production fuel this affable track that fans of Bright Victory will appreciate.

Bright Victory is far more than an inspiring account of one GI's struggle to carry on and become self-sufficient after a sniper's bullet destroys his sight. Director Mark Robson's film is also a searing indictment of racism that still strikes a chord - and nerve - today. Arthur Kennedy's Oscar-nominated performance, a sensitive script, and fluid direction loft this little-known and long-neglected movie onto a higher plane, and Kino honors it with a newly remastered transfer, solid audio, and fine commentary track. Bright Victory is a bright spot on the Hollywood landscape and it deserves to be rediscovered. Recommended.