Sam Raimi's iconic Army of Darkness has delighted fans for generations and now comes home to 4K Ultra HD Blu-ray with an exciting 4-disc set with the theatrical version in 4K Ultra HD and 1080p, along with the fan-favorite Director's Cut, and International Cut on Blu-ray. To sweeten the deal for the uberfans and collectors out there, Scream Factory delivers the ultimate bundle (currently sold out)! Highly Recommended for die-hard screwhead fans and deadite collectors.

It's no secret that Army of Darkness has been my absolute favorite film since it was released back in 1992. It's the perfect film. It has everything anyone would want in a movie-watching experience. Romance, action, adventure, thrills, chills, comedy, one-liners, skeletons, and fun. Sam Raimi and Bruce  Campbell brought their big-budget third installment of the film that put them on the map and cemented their cult status and filmmaking careers forever. It's the ultimate film experience and continues to impress.

We've covered Army of Darkness numerous times on three different formats now. For a variety of opinions on this film and its many releases, check out our past reviews: 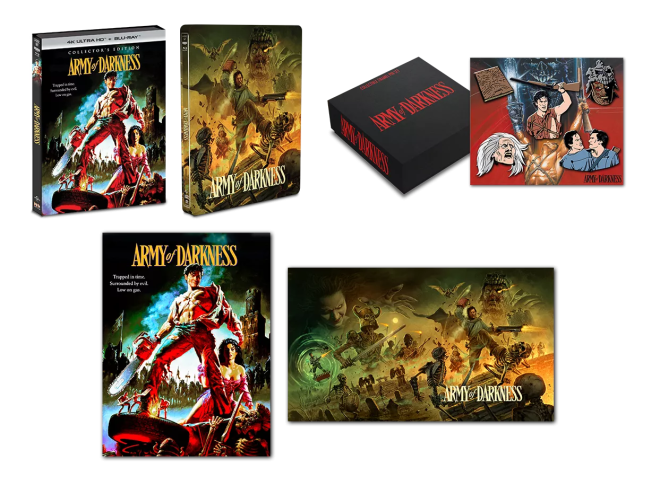 Vital Disc Stats: The 4K Ultra HD Blu-ray
Army of Darkness time travels its way to 4K + Blu-ray via Scream Factory in a big way. This Limited Edition Giftset has some wonderful goodies.
The 4K comes with a hard, black plastic case with a cardboard sleeve that features the original theatrical poster artwork. There are four discs inside, including a 4K of the Theatrical Cut, and three Blu-rays of the Director's Cut, the International Cut, and the Theatrical cut. Extras are spread across each disc.

There is also a Limited Edition Steelbook of the film inside a glorious newly illustrated steelbook that features Ash kicking some deadite butt. There are four discs inside as well and are the same as above. It's a beautiful-looking set.

Also included are two poster tubes with a poster inside each. One poster is rolled up and features the original theatrical poster one sheet, and the other comes with the newly illustrated artwork for the film.

Additionally, there is a fancy cardboard case that houses five elaborate and detailed enamel pins of characters from the film, that include, Evil Ash, the dueling Ashs, Bruce Campbell himself, the Necronomicon, and the Pit Witch. This set is currently sold out.

A horde of deadites lay siege to the Ultra HD fortress with an impressive HEVC H.265 encode that exceeds expectations and pretty much puts the previous Blu-ray release to shame. Coming from brand-new restoration and remaster of the original 35mm camera negatives, the native 4K transfer, approved by Raimi and cinematographer Bill Pope, showcases incredibly sharp details for a majority of the runtime with a few soft, blurry moments sprinkled throughout. However, most of those are associated with the optical effects, compositing and matte photography, so they are to be expected and easily forgiven. Otherwise, the individual hairs of the cast, the threading in the costumes and the tiny pebbles on the ground are discrete, and the small fractures and imperfections along the castle walls are plain to make out from a short distance. Facial complexions appear natural with an accurate peachy-rose tone in every actor and lifelike textures, revealing every pore, wrinkle and negligible blemish.

The Dolby Vision HDR presentation also lands with an excellent contrast balance and clean, radiant whites, making the movie look fresh and rejuvenated. Specular highlights are crisp and brilliant with a tight, narrow glow from the light of the torches and the many moments of explosions during the climactic battle while the metal armor comes with a realistic sheen and sparkle in the sunlight. Meanwhile, black levels are inkier with excellent gradational differences between the various shades and strong shadow detailing during the many nighttime and poorly-lit sequences, providing the 1.85:1 image with a beautiful cinematic appeal. At the same time, primaries are fuller and richer than their HD SDR counterparts, especially the deeper reds and more energetic blues. Likewise, secondary hues show better, more variation within the fiery oranges and in the colors of some outfits while yellows are noticeably more accurate and warmer.

Overall, the theatrical cut of Army has never looked so good and is sure to please diehard fans. (Dolby Vision HDR Video Rating: 88/100)

In the audio front of this deadite battle, the dogs of war howl their way towards victory with the same pair of satisfying DTS-HD MA soundtracks: a 5.1 upmix and a 2.0 stereo track. For a more in-depth and thorough take on the audio quality, you can read our review of the 2015 Collector's Blu-ray Edition HERE. (Audio Rating: 80/100)

Sam Raimi's intentionally campy Army of Darkness remains a cult classic thanks to Bruce Campbell's perfectly-timed performance and the wacky visual effects referencing Ray Harryhausen. Three decades later, the horror-comedy continues to scare the laughs out of fans while offering a fun ride. Celebrating its 30th Anniversary, Scream Factory unleashes the dogs of war with a four-disc 4K Ultra HD set showcasing an impressive and highly-satisfying Dolby Vision HDR presentation of the theatrical cut, which is a vast improvement from its Blu-ray predecessor. Porting over the same set of audio options and all of the previous bonus features - for the uber fan and collector out there, this Limited Edition set from Scream Factory is fully loaded with posters, pins, and the standard Collector's Edition and SteelBook and is a real treat! Unfortunately, right now the set is sold out, unless some folks cancel their orders the grey market is your best bet to finding this. - Highly Recommended