The story of a flamboyant con man who challenges the strait-laced attitudes of an uptight community and helps a "plain" woman find her inner beauty, The Rainmaker soars on the strength of captivating performances from Burt Lancaster and Katharine Hepburn. Director Joseph Anthony's adaptation of an underrated play by N. Richard Nash struggles to shed its stagy feel, but it looks terrific, thanks to a brand-new HD master struck from a 6K scan of the 35mm VistaVision original camera negative. Excellent audio and a solid commentary track also distinguish Kino Lorber Studio Classics' Blu-ray presentation of this long-neglected 1950s classic. Recommended.

Con men have long been a Hollywood staple. Sometimes they're ruthless and cold, but more often than not movie grifters exude a winning bad-boy charm that endears them to audiences despite their serial lies and swindling. The most lovable of these rapscallions is arguably Harold Hill in The Music Man, but a few years before he tried to hoodwink the residents of River City, Iowa, another con man peddled his bogus wares and touted his supernatural ability to bring rain to the downtrodden people of Three Point, "the most prosperous small town in the Southwest...until the drought come."

Bill Starbuck (Burt Lancaster) may not be able to manufacture a downpour to quench the parched land, but he does possess the intangibles to transform the lives of a dysfunctional family during the Depression. The Rainmaker, an adaptation of N. Richard Nash's 1954 Broadway play, chronicles his interactions with the Curry clan and how he raises the spirits and inflames the passions of Lizzie Curry (Katharine Hepburn), a repressed spinster who questions her beauty inside and out. The strapping Starbuck doesn't doubt his own allure, but is plagued by insecurities as well, and one fateful evening these two lost souls enlighten and embolden each other. 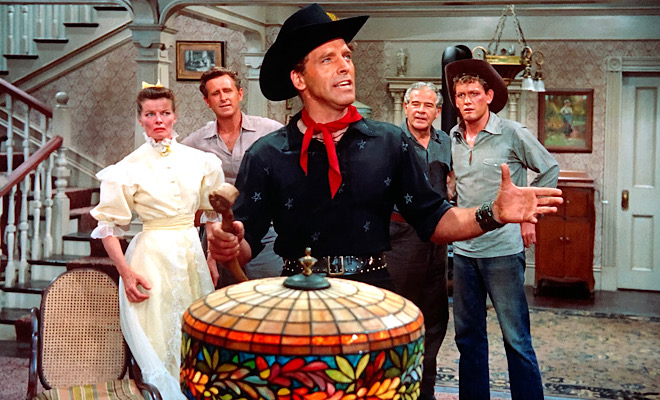 The trick to successfully transferring a stage play to the screen is giving the drama plenty of breathing room without sacrificing its intimacy and raw power. With its rural Southwestern setting, The Rainmaker would seem like a cinematic natural that would benefit from shooting numerous scenes in the great outdoors, but rookie director Joseph Anthony, who also helmed the Broadway production, keeps the lively narrative largely confined to a soundstage, which often saddles it with a stifling stuffiness. As a result, artifice abounds, occasionally compromising this very human tale and trivializing its salt-of-the-earth characters. While one could argue Anthony's stagy approach adds a dreamy quality to a story about dreamers, the raw power of nature would have complemented the story's raw emotions and given The Rainmaker more oomph.

With its introspective characters and whimsical plot, The Rainmaker often feels like a movie in search of a score. A couple of spots seem ripe for a song insert, so it's not surprising the show would later spawn a successful 1963 musical, 110 in the Shade, with music and lyrics by Tom Jones and Harvey Schmidt, who also wrote The Fantasticks. Interestingly, 110 in the Shade would last almost three times longer on Broadway than The Rainmaker, but couldn't come close to matching The Music Man's 1,300-plus performance run. 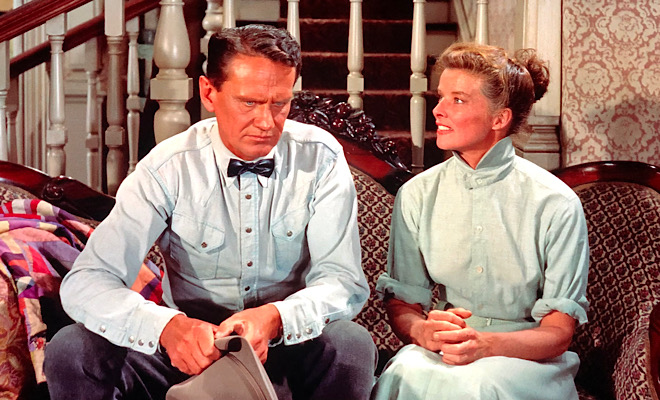 Some sporadic artistry and Charles Lang's gorgeous photography keep the eye engaged, but Anthony's lack of cinematic experience yields a rather static film. Lucky for us, Nash's fine adapted screenplay and the nuanced performances of Lancaster, Hepburn, Wendell Corey, Lloyd Bridges, and Earl Holliman are strong enough to carry the day. In what now looks like a mere warm-up for his Oscar-winning turn as an even more nefarious con man in Elmer Gantry seven years later, Lancaster uses his virility, acrobatic talent, and toothy grins to craft a portrayal that brims with vitality. When he's not on screen - and there's a long stretch early in the movie when he isn't - The Rainmaker slows considerably, despite the magnetism of its legendary leading lady.

Hepburn, who had just played to perfection a more modern spinster in David Lean's Summertime, brings enormous warmth and vulnerability along with her patented pluck to the put-upon Lizzie, but at age 49 she's far too old to believably play a woman in her late-20s. (Thirty-year-old Geraldine Page originated the role on Broadway and surely would have been marvelous in the film version as well, but was not yet an established Hollywood actress.) Age aside, Hepburn nails the part and deservedly earned her seventh Oscar nomination for a performance that often gets lost among her many acclaimed and affecting portrayals. (She would lose the award to Ingrid Bergman in Anastasia.) 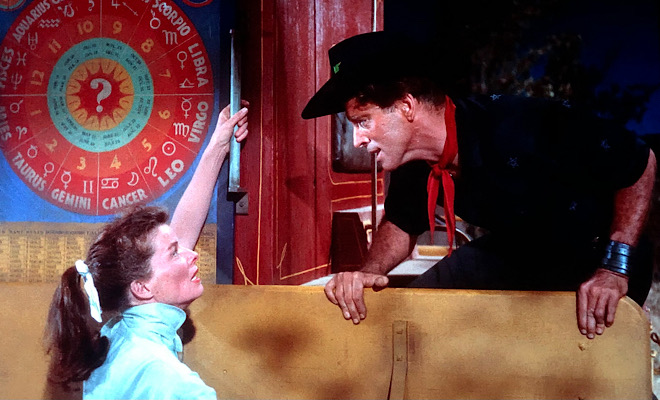 The Rainmaker is far from a perfect movie. It meanders at times, creaks a bit around the edges, and the chemistry between Lancaster and Hepburn feels somewhat forced, but its core values, charming story, and captivating portrayals continue to resonate. Over the past several decades, The Rainmaker gradually faded from view, but this stunning restoration from Paramount and Kino brings it back to the forefront so it can be rediscovered and appreciated anew by aficionados of the classics.

Vital Disc Stats: The Blu-ray
The Rainmaker arrives on Blu-ray packaged in a standard case. Video codec is 1080p/AVC MPEG-4 and audio is DTS-HD Master Audio 2.0 mono. Once the disc is inserted into the player, the static menu with music immediately pops up; no previews or promos precede it.

Give me VistaVision and a brand-new HD master struck from a 6K scan of the original camera negative, and I'm one very happy classic movie camper. Kino does just that with The Rainmaker, and the resulting 1080p/AVC MPEG-4 transfer is a thing of beauty. It's not perfect - some mild speckling crops up here and there - but the enhanced clarity, terrific contrast, reduced grain, and bold hues of VistaVision make it easy to forgive any imperfections. The film-like presentation faithfully honors Charles Lang's cinematography and faithfully renders all the brilliant color. A bold red jalopy, Starbuck's red bandana, the various wood tones, the huge yellow drum, and the pastels and primaries that grace several Tiffany lamps and a patchwork quilt are wondrously lush, blacks are deep (especially Starbuck's shirt, pants, and Stetson hat), and the designs of Lizzie's white and pale yellow dress are well defined. 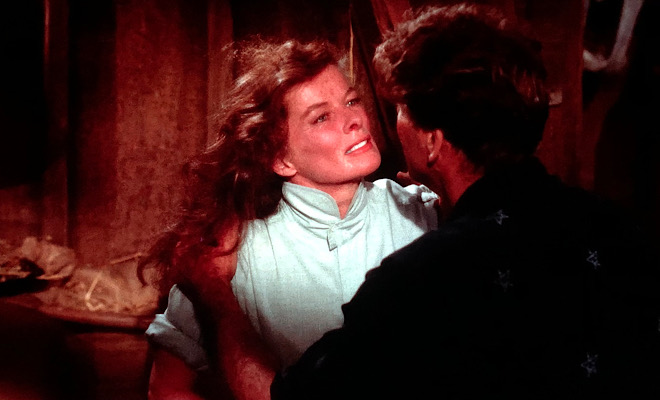 Fine details like the sparks from an erupting firecracker, the climactic rain, the patterns and textures in costumes, rugs, and wallpaper, and the decor in Lizzie's home are crisp; flesh tones appear natural and remain consistent throughout; excellent shadow delineation keeps crush at bay; and sharp close-ups showcase Hepburn's freckles (as well as a few wrinkles), Lancaster's ruddy complexion and white teeth, and the sweat that glistens on almost everyone's faces. VistaVision and Blu-ray make a perfect match, and The Rainmaker proves it once again. 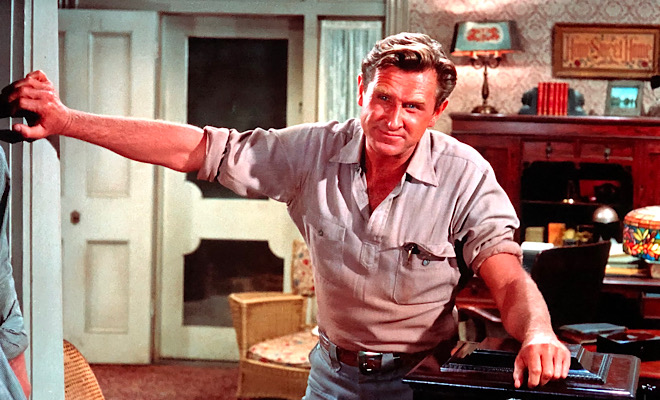 The Rainmaker is a talky film, but the DTS-HD Master Audio 2.0 mono track gets a few chances to flex its muscles. Rumbling truck engines, fisticuffs, and falling rain are distinct, and the constant drum-beating that occurs toward the end of the film delivers strong bass accents, some of which reverberate with a hint of distortion. A wide dynamic scale embraces all the highs and lows of Alex North's Oscar-nominated music score, and though some of the dialogue sounds a bit hollow (the result of shooting exteriors on a soundstage), it's well prioritized and generally easy to comprehend. Excellent fidelity helps the audio fill the room with ease, and no age-related hiss, pops, or crackle intrude.

A couple of extras round out the disc.

The Rainmaker may struggle to shed its stage roots, but the timeless performances of Burt Lancaster, Katharine Hepburn, and a top-notch supporting cast make it worth rediscovering. The luscious transfer, struck from a new 6K scan of the 35mm VistaVision original camera negative, adds luster to this lively tale of a con man, a spinster, and a dusty, uptight western town. Solid audio and an engaging commentary track also enhance Kino's superior Blu-ray presentation of this underrated film. Recommended.