George A. Romero left an indelible mark on the film industry. From his first low-budget smash to his forays into anthology storytelling to just making some of the creepiest films ever, his spirit looms large in the Horror genre. But between projects, he made what was supposed to be a simple informative film about eldercare and turned it into one of the most skin-crawling fifty minutes of celluloid. RLJE and Shudder bring The Amusement Park to Blu-ray - considering the film was forgotten about for decades this A/V presentation is the best we’re likely to see, but the disc sweetens the package with a nice set of bonus features. Recommended.

[From our previously published advance review]

What would happen if you hired the director of Night of the Living Dead to make a PSA film? The answer to that bizarre question is 1973’s surrealist morality tale The Amusement Park. Starring Lincoln Maazel, this hour-long film focuses on an elderly man hoping to enjoy the full experience life has to offer contained within a metaphoric amusement park. This park is like any other, you buy your tickets and get to ride - only the price isn’t the same for everyone. You enjoy the attractions, but not everyone gets equal access. You try to enjoy a decent meal, but if you don’t have enough tickets you take what you can get - if anything.

Maazel introduces this little morality play as any other after-school special public service announcement of the era. It’s a thin setup that raises questions about the position and purpose of the elderly in society. Some view the elderly as people to be revered, others view them as secondhand citizens. The film that follows is a surrealist nightmare of how poorly the elder community is treated and exploited.

After There’s Always Vanilla and Season of the Witch, The Amusement Park is Romero at his most humorless and nihilistic. Romero always had a sharp needle for satire but this film goes far beyond the usual humorously horrific tendencies he’d exploit for The Crazies, Martin, and Dawn of the Dead. He uses that needle to poke you in the eye repeatedly covering everything from general ageism to racism to economic classism within the elder community. It’s often unfocused; staggering from one bizarre scenario to the next - but it’s a chilling and haunting piece of work. 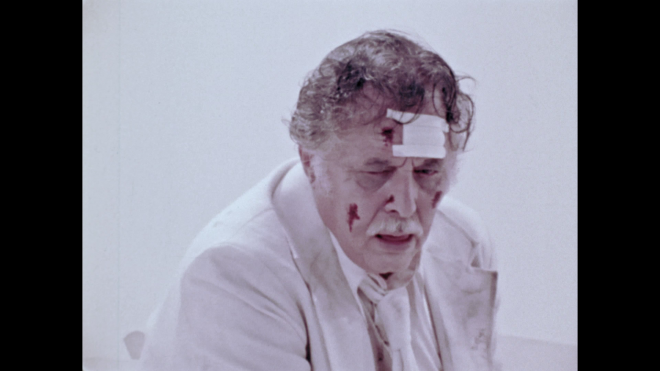 Beyond the initial setup, there’s not much of a cohesive plot to The Amusement Park. It’s an avant-garde showpiece with a message, but you the audience have to suss out what that message is. As Maazel navigates this nightmare we experience one shocking scenario after another with little room to come up for air. Just when you think you might get a fresh breath, that air is sucked out of the room.

Commissioned by a Lutheran society group, the story goes that this piece was so shocking and horrifying they refused to show it. And for nearly fifty years it was lost until someone found a badly faded 16mm print. Now restored to the best possible condition - it’s still very faded and audio has some remaining artifacts - the film can finally be experienced by Romer’s legion of fans. 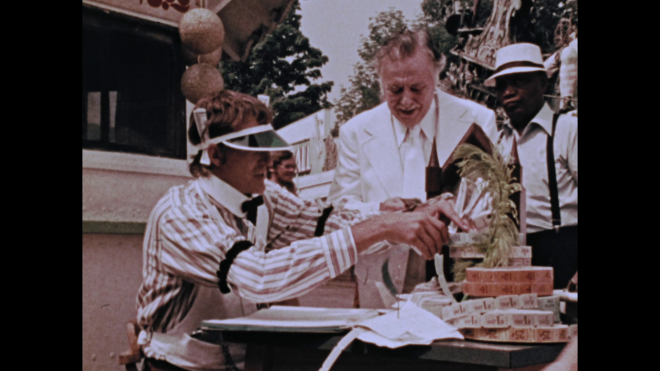 Watching The Amusement Park I couldn’t shake the stories of Covid lockdowns and people living in eldercare facilities. Not only were they some of the hardest hit by the virus they were also increasingly isolated as friends and family weren’t able to see each other face to face for the last year. Now as the country is opening back up and vaccines are readily available, there’s a feeling of hope. But at the same time, one wonders about the damage done to some people simply by not being able to touch or communicate with another person.

While I thought this was a deeply affecting piece of filmmaking, it’s certainly not for everyone. I readily admit to looking at my watch to see how much more of this film there was to go. Early on it has a strange languid pace and the imagery isn’t always accessible with a weird energy, but about 25-minutes in it sunk its hooks into me and didn't let go. It goes from being simply bizarre to quite terrifying to outright tragic in the final stretch.

Vital Disc Stats: The Blu-ray
RLJE and Shudder team up to bring George Romero’s The Amusement Park to Blu-ray in a single-disc release. Pressed on a Region A BD-25 disc, the disc is housed in a standard case with identical slipcover artwork with raised letters and features. The disc loads to trailers for other Shudder releases before arriving at a static image main menu with traditional navigation options. 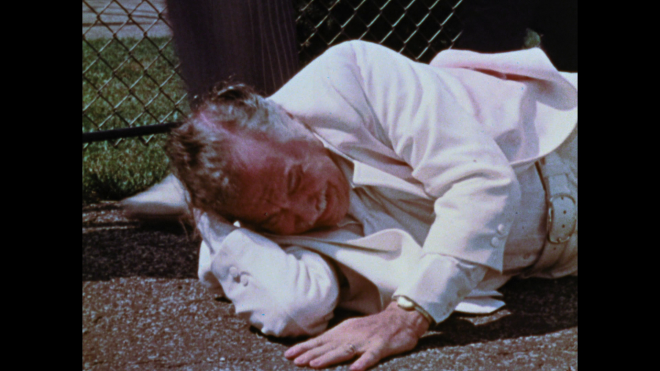 Given this film’s age and how poorly it was stored for about four decades, we’re honestly lucky to have this movie at all. But this lone surviving copy of the film does come with all of the hallmarks of improper care and storage ranging from an array of nicks and scratches, speckling, but most severely color fade. Now I’ve heard this film was always supposed to have a surrealist color timing to make the experience even more maddening, but from scene to scene colors can shift quite a bit. There are a few sequences that look outright wonderful before returning right back to the faded red-shifted tones with pinkish whites. Again, not a surprise there, simply is what it is. Considering this was sourced from a 16mm print and not the actual negative or properly archived materials this is still pretty good. 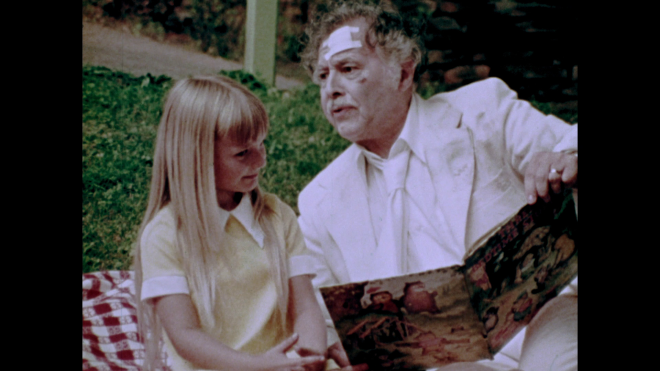 This film also comes with a nice DTS-HD MA 2.0 track that’s largely lively, active, and engaging with overall fine dialog fidelity. The issue at hand, much like the video, is the amount of wear and tear. There’s a lot of hiss in certain sequences because these are the only surviving audio elements. There are also a number of pops and skips throughout. Most of the time it’s fine there aren’t any issues and you can experience this surrealist piece of horror unencumbered, but there are just some things that can’t be fixed without original elements. 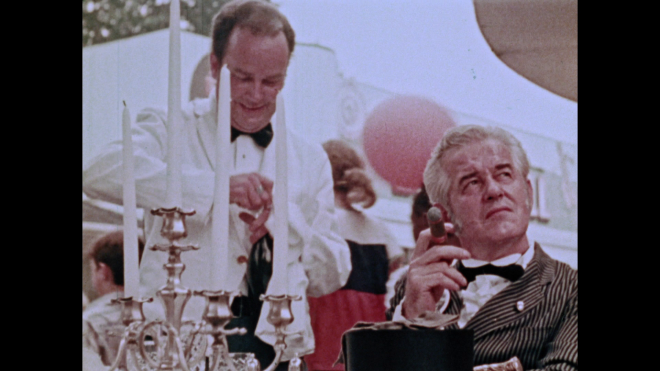 In a nice turn, RLJE stacks this release with a number of excellent bonus features. Michael Gornick delivers an excellent and informative audio commentary. Suzanne Desrocher-Romero and Bonnie Hinzman have some nice interview segments to pick through along with some other welcome extras. Maybe not the most aggressive selection, but considering all things this is pretty great for a 50-minute horrifying infomercial! The Interview with Suzanne in particular is interesting for detailing the re-discovery of the film and what it took to restore the 16mm print. The Panel Interview is also nicely informative given all of the personalities that appear for this Zoom-styled interview piece. 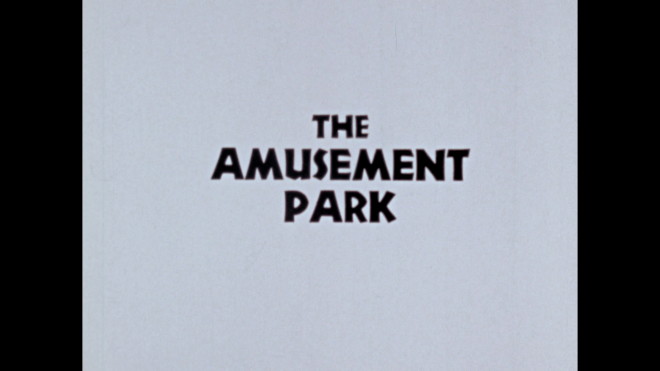 Not your typical horror film and certainly not your average Romero zombie movie, The Amusement Park isn’t for everyone. It’s a surrealist cautionary piece commissioned by the Lutheran Society about the importance of eldercare. I’m sure they expected a run-of-the-mill “give Grandma a hug” sort of piece, but George delivered a masterpiece of unflinching terror because it’s something we’re all going to experience. We’re all going to get old and in Romero’s vision, it’s a terrifying inevitability. After a tour of duty streaming exclusively on Shudder, The Amusement Park finally comes home to Blu-ray thanks to RLJE. The A/V presentation is a case of “as good as it can get” - a massive restoration effort was undertaken to get the surviving 16mm prints in as good a shape as we see here. There’s a nice variety of bonus features packed in here to sweeten the deal. For Romero fans, this is an essential piece of the collection come home. Recommended.