LA playboy Dean (Skylar Astin) is fed up with one-night-stands and empty relationships - he wants more out of life than just a party. With a little inspiration from his nine-year-old nephew and his best friend Tess (Camilla Belle), Dean decides to try his hand at finding true love for the first time - which proves to be much more difficult than he thought in modern-day Los Angeles. After a few hilariously bad first dates and some awful advice from his oversexed guy friends, Dean begins to realize that the true love he has been seeking may be much closer to home. But when he is forced to make a decision between the girl he knows is perfect for him and the seductive party-girl of his fantasies, will Dean finally grow up…or will he just continue the party?

In the history of obnoxious, loathsome, dudebro-on-the-dating-scene movies, writer-director Herschel Faber's 'Cavemen' quickly distinguishes itself as a frontrunner for the most odious. This pale, heartless imitation of Jon Favreau's clever and entertaining 'Swingers,' concerns a group of young men navigating the often rough, murky waters of the L.A. dating scene. Unlike its inspiration, however, this cheap knockoff neglects to infuse any of its characters or its trite, predictable storyline with anything remotely approaching a personality or a soul. What's worse is that, as indicated by the title, the movie seems to be presenting itself as a self-aware comedy, winking at the misbehavior of its protagonists, their abhorrent sex-obsessed conquests, and banal guy-centric dialogue. Instead, whether through willfulness or just plain ignorance, it comes off like a celebration of men's objectification of women. Worse yet, it has all the style, nuance, and substance of an Ed Hardy-wrapped fist bump, reeking of Axe body spray.

'Cavemen' concerns four bachelors living in a converted warehouse in downtown L.A. that has been tastefully decorated in the style of a brothel, as one might see on Game of Thrones. Skylar Astin and Chad Michael Murray take the lead roles of Dean and Jay, respectively, while Dayo Okeniyi and Kenny Wormald take the backseat, as a pair of flatly written auxiliary characters who exist solely to spout Yoda-like truisms about love, and/or attempt to prove there really is someone special for everyone. The film begins with the foursome throwing a party in their den of iniquity; swilling beers and telling stories about all the women they've had random sexual encounters with. The first particular tale concerns the rejection of a young lady because she did not meet Jay's standard of physical beauty, meaning she ends up with perpetual nice-guy, Dean, while her far more attractive friend services Jay in an alley way. As far as unpleasant ways for a movie to ingratiate itself with the audience, this is certainly one way to go; it's the movie equivalent of some guy casually mentioning that his interests include "naked girls."

But there's trouble in the cave. Aspiring screenwriter Dean is tired of the casual hook-ups with Sara (Megan Stevenson), his friend with benefits, and other random women he meets. Dean's looking for something more substantial and meaningful, and so he decides he'll write a screenplay about his quest for love. That puts him on a collision course with his best friend Tess (Camilla Belle), with whom he frequently speaks over the phone, while they watch the same dating program, affording Dean the opportunity to complain about the "douche bag" contestants – apparently oblivious to how deserving he is of this moniker. This clever conundrum makes Dean the first character in the history of romantic comedies to be worried that a burgeoning romance will spoil what is otherwise a seemingly healthy and rewarding friendship. 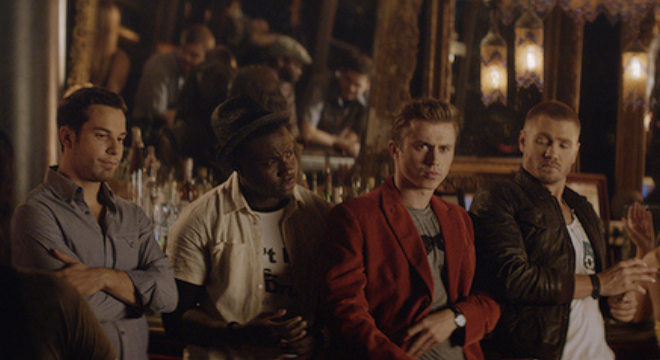 Thankfully, Faber doesn't stop at lacing his movie with tired genre tropes and ridiculously clichéd characters; he's also kind enough to spice up the proceedings with some truly top-notch dialogue. In yet another scene evoking 'Swingers,' Dean has a conversation with the disembodied voice of reason coming from a speaker on a subway car (because no one has answering machines anymore) that brilliantly chimes, "Are you lonely? That's because you're alone." Later, in a self-serving story beat, featuring an utterly unnecessary character played by Jason Patric, 'Cavemen' briefly goes meta, as Patric's Hollywood agent Jack Bartlett drunkenly praises Dean's screenplay – which is ostensibly the film he's currently a part of – as a truly worthwhile endeavor that just needs an ending. That ending, of course, requires Dean to resolve his feelings for Tess, without jeopardizing their pre-existing relationship. In order to do this, Dean seeks the council of his nephew in a string of gross scenes reminiscent of  '(500) Days of Summer.'

It's not just that 'Cavemen' is a hackneyed, disposable film that wastes the normally amiable Astin, by giving him absolutely no outlet for his charm, and then puts him in league with several repellent characters; it's that Faber remains oblivious to the ways this tale of insufferable dudebros who just can't get it together is a perfect example of what's wrong with the depiction of women in much of popular culture. Here, women aren't even given the distinction of being characters; they're one-note examples of prurient desire. They aren't viewed as people, but as things to be obtained. One character bares her breasts in a scene that is so deliberately framed to show them, it's like Faber is straining to underline the presence of superfluous nudity. Yet another is declared unfit for a relationship, and is thought to be potentially dangerous, after it is revealed she has emotional problems and is (gasp!) seeing a therapist. As if that didn't make things clear enough, Okeniyi's character actually uses a lighter as a metaphor for women, illuminating how the screenplay regards them as inanimate things to be possessed by men who have the power to either cherish them, or discard them.

'Cavemen' is another detestable example of how far too many narratives depict women as objects and men as their subjects. But more than its inherent sexism, the film is just idiotic, unoriginal, and mind-numbingly boring. The cast is full of attractive people doing unattractive things. There's a story in there somewhere; it is just too bad the film's writer-director didn't care to work toward finding out what that story was.

'Cavemen' comes from Well Go Entertainment USA as a single 25GB Blu-ray Disc in the standard keepcase. The disc will auto play the standard previews before the top menu, and the only supplemental feature included here is a trailer for the film itself.

'Cavemen' is presented with a detailed 1080p AVC-MPEG-4 encoded transfer. The movie itself is unimaginatively shot, to the point that its presentation borders on being atrocious, but the image here is crisp, clean, and brightly colored. As mentioned above, the image contains plenty of fine detail. Facial features are on full display, rendering everything from wrinkles, slight blemishes, and wisps of facial hair in terrific detail. Textures are also present most of the time, making the assortments of sheets and curtains separating the roomates' sleeping quarters look all the more garish and brothel-like. Still, the image does manage to present Los Angeles in terrific detail, highlighting some downtown elements nicely, with good depth of field and detail on objects in the background.

Contrast remains high throughout, offering very robust blacks and whites that never look overblown. Shadow delineation and gray scale are handled nicely, while the image is free of banding or elements of crush. At the same time, edges remain distinct and well defined throughout, adding to the overall clarity of the picture, while colors are abundant and often appear quite vibrant without being over saturated.

The downside to the image is that it's simply bland. There are portions where the image looks a little flat and sterile – which is often the case with films of this nature. Still, there are plenty of plusses that make overlooking such novice mistakes a little easier. This is a nice looking image for a bad picture.

The DTS-HD Master Audio 5.1 mix doesn't necessarily have a great deal to do outside of presenting the characters' dialogue, but it manages to busy itself with atmospheric elements, sound effects, and ambient sounds nonetheless. First and foremost, the mix delivers the dialogue with terrific clarity, distinguishing between environmental noises and the intonation of the characters quite well. Voices are distinct and crisp, typically emanating from the center channel, while other layers remain present through the front and rear channels. Since many important scenes take place in the midst of a party, the mix is tasked with delivering an immersive experience, while ensuring the primary focus of the scene is still plainly heard. For its part, the audio delivers a very good sounding effort that balances these various elements without allowing one to overwhelm the other.

There aren't too many examples of LFE anywhere, but the film doesn't seem lesser for lacking them. Primarily, this film relies on clear delivery of its dialogue and the sense of atmosphere to get the feeling of its setting across. All in all, the mix delivers all of this quiet well.

With nothing original, thoughtful, or memorable to say, 'Cavemen' readily presents itself as a perfect example of what not to do when making a movie. It's difficult to escape the notion that this film is in some way a vaguely autobiographical account of Faber's own experiences as a young screenwriter and man about town. If that's the case, then, it definitely disproves the adage of "write what you know," on the principle that most people's lives are simply too boring to be made into a film. Other than that, the movie is just unbearable in its unequal treatment of women and men, making an already monotonous narrative into an offensive one. Faber may not have meant to come off as insulting, but somehow that makes the movie even worse. Despite having a good image and very good sound, this one should be skipped.

Sale Price 12.96
List Price 29.98
Buy Now
3rd Party 4.33
In Stock.
See what people are saying about this story or others
See Comments in Forum
Previous Next
Pre-Orders
Tomorrow's latest releases