Overview - Hip and hilarious! Critics and audiences alike are raving about this must-see comedy hit! It's the laugh-out-loud look at a fun group of friends who spend their days looking for work and their nights in and out of hollywood's coolest after-hours hangouts! When the lovesick Mike (Jon Favreau) can't seem to shake a relationship rut, his smooth, fast talking buddy Trent (Vince Vaughn) decides he'll do whatever it takes to show Mike a good time! Whether laughing over martinis in smoky cocktail lounges... or searching for beautiful babes on an outrageous road trip to Vegas, the young "Swingers" are determined to rewrite the rules of modern dating.
OVERALL
Recommended 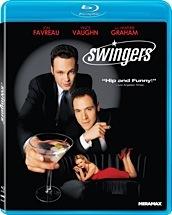 There is really only one word to describe Doug Liman's 1996 indie hit 'Swingers,' and that word is of course… money. This movie is money, baby! It's so damn money! Written by and starring Jon Favreau, along with supporting performances by close friends Vince Vaughn (in his breakout role) and Ron Livingston, this low budget gem of a film chronicles the harsh realities of heartbreak and the prevailing strength of friendship through the oftentimes hilarious prism of Hollywood culture. Thanks to an authentic cast of characters and a raw shooting style, the humorous observations and insightful commentary still seem as fresh as ever, even after fifteen years, cementing the film as a lasting testament to 90s independent cinema, worthy of being bunched in with the divisive but defining likes of 'Slacker,' 'Clerks,' and 'Reservoir Dogs.'

The story follows a struggling, young comedian named Mike (Jon Favreau) who is desperately trying to get over a bad breakup while seeking both personal and professional success in Hollywood. Part of a close group of friends, that includes the more outgoing and sometimes obnoxious Trent (Vince Vaughn), the potentially violent Sue (Patrick Van Horn), the sensible Rob (Ron Livingston), and the cool headed Charles (Alex Desert), the gang spends most of their time navigating the trendy "cocktail nation" club scene of LA, while attempting to pick up women. Structured in a very episodic manner, the script focuses on several such outings, including an early trip to Vegas, that all come together to form a larger narrative, revealing Mike's gradual growth in confidence toward a possible solution to his depression.

The script is rather loose in design, lacking the more rigid and traditional structure of most mainstream releases, and Favreau wisely places the emphasis not on plot, but on the characters themselves. Most scenes simply feature the gang hanging out together, playing video game hockey, and trying to pick up women at clubs and parties. While this sounds like it might get tiresome or lack cohesion, the personal arcs of the characters, in particular Mike's, guide us through all of the disjointed, funny scenarios, firmly grounding the narrative in an emotional core. Partially based on the actual actors who portray them, each member of the gang truly feels like a real, living, breathing individual. The performances are all honest and stripped down, but still infinitely entertaining. As the lovelorn Mike, Favreau exudes an awkward and often pathetic likeability, sometimes echoing the likes of Woody Allen. His unlucky and painful interaction with women make him instantly relatable and his whole underdog persona gets the audience on his side. We can't help but root for him and hope that he'll be able to succeed by the time the credits roll. While the supporting cast is all strong, with a commendable turn by the always reliable Ron Livingston, Vaughn really steals the show. Though I've grown to find the actor's shtick tiresome in recent years, here he exudes a fresh, unfiltered energy that plays perfectly against the more reserved Mike. An unpredictable smart-ass, the character of Trent has some of the best lines, and though he can go too far at times, Vaughn and the filmmakers know exactly when to ground him, by displaying a deeper, emotional man that truly cares about his friends.

Going along with the emphasis on character, dialogue is really king here, and Favreau's screenplay is packed with witty observations on Hollywood culture and the minutia of single life. Almost every other line of dialogue features a quotable phrase or laugh worthy insight. In fact, the groups' many rules and strategies related to picking up women have actually become cultural staples of the dating community, and the numerous, biting jabs at the superficiality of LA lifestyle could not be more on the money. The slang the characters use might annoy some, but it all just adds to the authentic and almost tongue in cheek tone of the material. This is a portrait of a certain culture, in a specific place, during a particular time, that stays true to all of the little details and idiosyncrasies that make it all so rich and unique. While the characters and setting are all very specific and potentially dated, the universal aspects of their personalities, actions, and words, still make this an easily relatable and surprisingly timeless comedy.

Bringing the wonderful screenplay to life, is Doug Liman's restrained but creative direction. Liman wisely realizes that the key focus should be on the performances and banter, but that never stops him from employing some strong directorial choices. Shot in an almost guerrilla style, the filmmakers used actual locations and practical lighting, that while mostly done out of budgetary necessity, effectively bolsters the authentic tone of the story. Liman bounces around from a more fly-on-the-wall almost vérité style of hand held camera work, to more calculated, energetic flourishes. There are even some deliberate visual references and homages to several films mentioned in the actual narrative, including great nods to 'Reservoir Dogs,' and 'Goodfellas,' that all add a slightly self-aware feel to the proceedings.

Despite the occasional flash of quick cuts or inclusion of complicated tracking shots, Liman always knows when to pull back and just let the characters and performances speak for themselves. This is perhaps no more evident than in one of the movie's best scenes, which features Mike awkwardly leaving a message on a potential date's answering machine. As Mike repeatedly calls back to leave message after message, gradually digging a hole so deep that it literally makes you squirm in your seat, the shot just lingers on a simple master, allowing Favreau to control the flow and pacing of the sequence all through his delivery and mannerisms. Some purposeful cuts to close-ups come near the tail end of the scene, adding some emphasis, and it all leads to a hilariously memorable, and yet oddly sad and poignant moment. This one, simple scene, basically sums up everything there is to say about the character's pathetic, jumbled state of mind, in an economically and artistically potent manner.

Through a rough, but self assured style of low budget innovation, and a script that features likeable, well rounded characters, hilarious dialogue, and honest, insightful observations, 'Swingers' presents a universally relatable story of friendship. The juxtaposition of all the various, diverse personalities offers numerous potential strategies and paths through the confusing and difficult world of dating, but as the perfectly realized coda so effortlessly sums up, the take home message is to just be oneself. Simple, loosely constructed, heartfelt, very funny, and endlessly re-watchable, this is an indie classic that stands the test of time. While Farvreau and Vaughn might now be "all growns up," 'Swingers' still remains some of their best work.

'Swingers' is brought to Blu-ray by Lionsgate on a single BD-25 disc housed in a standard case. Some skippable trailers play upon startup before transitioning to a standard menu. The packaging indicates that this release is region A compatible.

The movie is provided with a 1080p/AVC MPEG-4 transfer in the 1.78:1 aspect ratio. Displaying its low budget roots, this is a pretty uneven but seemingly authentic transfer.

The print itself is in good shape with no real signs of damage. A moderate to heavy level of natural grain is apparent throughout, but can occasionally look more like noise. With that said, there a few isolated scenes in which grain looks a little unnatural, processed, or not fully resolved, leading to a blurry quality, especially in facial features (Mike and Rob's heart-to-heart scene is a good example). Whether this is a result of DNR or similar processing, or just a product of the shooting conditions and film stock used, I'm not sure, but either way, these incidents don't detract much from the movie. Detail can be pretty good, but the image has an overall rough and harsh look that is in part due to the use of relatively cheap equipment and practical lighting. While this all works perfectly with the tone of the script and performances, it doesn’t exactly lead to an impressive visual experience. Still, a few scenes do exhibit a pleasing level of depth and vibrancy, especially early shots of Vegas at night, with the neon lights popping from the screen. Colors vary throughout, sometimes appearing vivid, and sometimes looking a little drab. Fleshtones also vary, and can often look a little unnatural and a bit orange (the trailer scene is a good example), though again, this seems to be a result of the shooting methods. Black levels are solid and contrast is good.

With the exception of some isolated blurry scenes which might show signs of processing, this is a pretty respectable transfer that can't help but reveal the film's modest source elements. This is probably about as good as 'Swingers' can look on Blu-ray, and while rarely impressive, it is certainly acceptable. 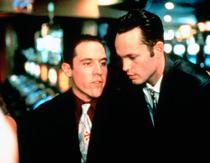 The film is presented with an English DTS-HD Master Audio 5.1 and 2.0 track. Like the video, the audio remains faithful to the movie's low budget production.

The film is mainly dialogue driven and thankfully speech is clean, but can sound a little thin. Directionality and surround use are minimal but the rears do offer some faint ambiance in many of the club and party scenes. Dynamic range and bass activity are fairly flat, though there is an occasional jolt of liveliness in the musical soundtrack of classic lounge staples and swing tunes. Balance favors dialogue, as it should, and thankfully none of the infinitely quotable lines get gobbled up by unnecessary effects.

This is a modest mix, that while very basic, still serves the film well. On the commentary track, director Doug Liman talks about being unable to afford professional sound design so he and the editor did it all themselves. While it's likely that some additional mixing was done for this 5.1 track, it still seems to remain faithful to its modest origins and much like the video, is probably as good as the movie will ever sound. Also, just a quick note, the film does default to the 2.0 track, so those that want the 5.1 mix will have to select it in the menu (though really, it makes very little difference).

Lionsgate has put together a respectable assortment of supplements, including two commentaries, deleted scenes, and a nice documentary. All of the special features are presented in standard definition with Dolby Digital 2.0 sound and no subtitle options.

'Swingers' is a hilarious and endearing comedy that succeeds thanks to the strengths of its heartfelt characters, honest performances, and fitting direction. The video and audio quality are a bit rough and basic but seemingly authentic, and the supplements are definitely worth your time. Lionsgate has done a pretty respectable job with this disc, resisting the urge to overproduce and re-process the modest source elements, and while it's far from demo material, this disc still comes recommended.

Sale Price 19.87
Buy Now
3rd Party 19.87
In Stock.
See what people are saying about this story or others
See Comments in Forum
Previous Next
Pre-Orders
Tomorrow's latest releases