The grand universe of Russian/Finnish fantasy and fable comes home with a glorious Blu-ray release of Aleksandr Ptushko’s 1959 epic Sampo. Americans and Mystery Science Theater 3000 fans will better know this movie as The Day the Earth Froze - but you’ve never seen it like this! Thanks to the folks at Deaf Crocodile, this incredible fantasy film gets to bask in a gorgeous new transfer with restored Finnish audio and an informative collection of bonus features. Highly Recommended

For the peaceful people of Kalevala, they work hard but prosperity illudes them without the mythical Sampo. In order to create the Sampo, the blacksmith IImarinen must find a suitable husband for his beautiful sister Annikki. When the young, handsome, and dedicated Lemminkäinen wins the girl's heart, the evil witch Louhi has designs of her own to obtain the Sampo and kidnaps Annikki before the lovers are to be wed. Now IImarinen and Lemminkäinen must quest to rescue the maiden, secure the Sampo, and bring prosperity to their home. 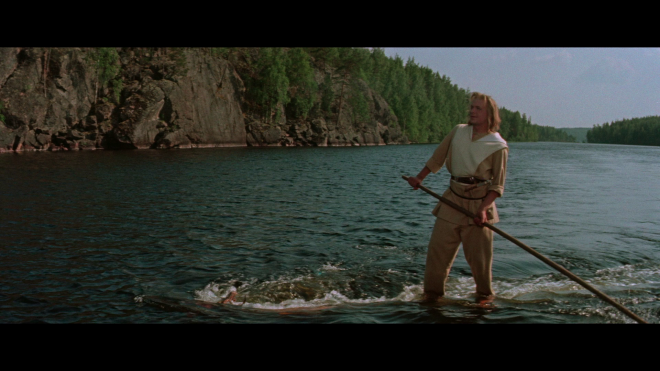 Like so many Russo-Finnish classics that made it to America, Sampo was subjected to editing scissors, a clunky English dubbing, and retitled to the more audience-catchy The Day the Earth Froze. The better side of twenty minutes was cut from the film leaving audiences with the gist of the plot but a lot of the character nuance was trimmed leaving a truncated hero’s journey for Lemminkäinen. And like Aleksandr Ptushko’s Ilya Muromets,  If you happened to catch Season 4, Episode 22 of Mystery Science Theater 3000, you witnessed a hilarious set of riffing that made light of the film but was never mean-spirited or disrespectful. It’s a classic episode, so if you can secure a copy or find it online, give it a look, it’s a fun time!

And like Ilya Muromets AKA The Sword and The Dragon, this is a beautiful production. It might not have the massive scale with the thousands of costumed extras, but it’s a wildly inventive fantastical piece of work. From Lemminkäinen and IImarinen plowing a field of serpents with a red iron horse to the evil Louhi capturing the sun casting the land in frost and darkness, it’s simply a beautiful film. Every frame is a delightful combination of real-life locations, matte painting backgrounds, scale miniatures, and inventive creature effects. 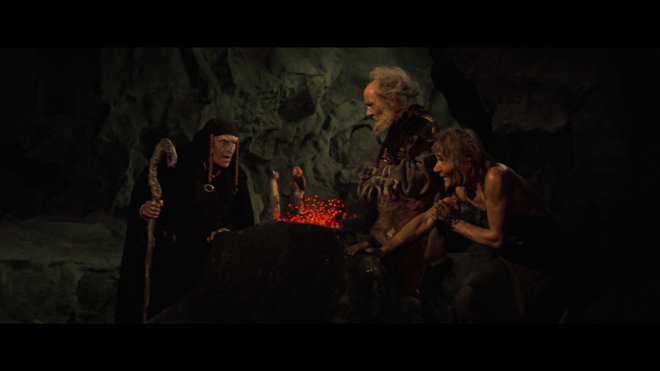 The story may be similar to countless tales told over time, but with the great cast and impressive production values, it’s an exciting film to watch. If you’ve only watched the edited version or the MST3k version you’re in for a real treat. I’d figured the film was edited heavily but there are entire subplots that are missing that work wonders for the film. As a huge fan of Mystery Science Theater 3000 I’ve dedicated a subsection of my collection to finding my favorite episodes unriffed and now with Ilya Muromets and Sampo on the shelf, two big pieces fall into place and in better shape than I could have ever imagined or hoped for.

Vital Disc Stats: The Blu-ray
Sampo conjures up a new Blu-ray release from Deaf Crocodile. Pressed on a Region A BD-50 disc, the disc is housed in a standard clear case and if you ordered from Vinegar Syndrome you pick up a pretty fantastic piece of custom art for the slipcover. Also included is a booklet with an essay and more information about the film. The disc loads to an animated main menu with standard navigation menu options. 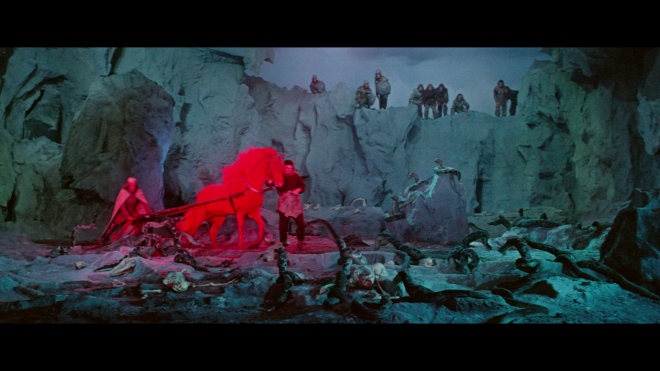 Sampo is an interesting case in filmmaking. It was essentially filmed multiple times to account for Russian and Finnish languages including CinemaScore 2.35:1 and 1.37:1 aspect ratios. For this release the Finnish 2.35:1 version was restored from the original 35mm nitrate negatives by KAVI - Finnish National Audiovisual Institute with some more work done by Deaf Crocodile and the results are spectacular. As I mentioned in the main review this is such a colorful and wildly visual film, it’s amazing seeing it in such incredible condition. Especially after spending the last thirty years or so with the MST3k episode! 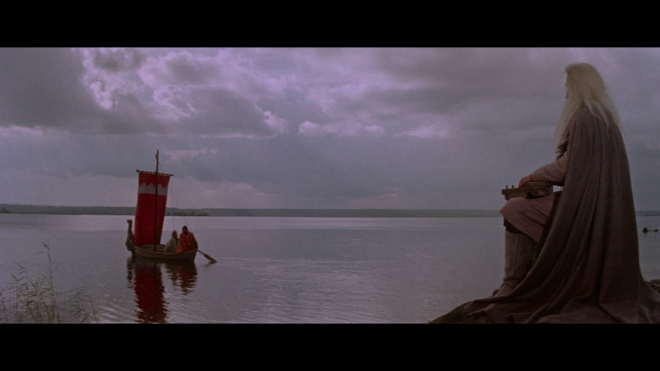 Details are rich and clear allowing full appreciation of the intricate makeup effects, costuming, and production design. The clarity does betray some of the optical effects and matte painting effects but considering the scale of the film that’s a small quibble. Colors are equally glorious with a full range of primaries to soak in. Black levels are deep giving the image a welcome sense of three-dimensional depth. Elements are in terrific shape without any signs of speckling, scratches, or any other age-related issues. 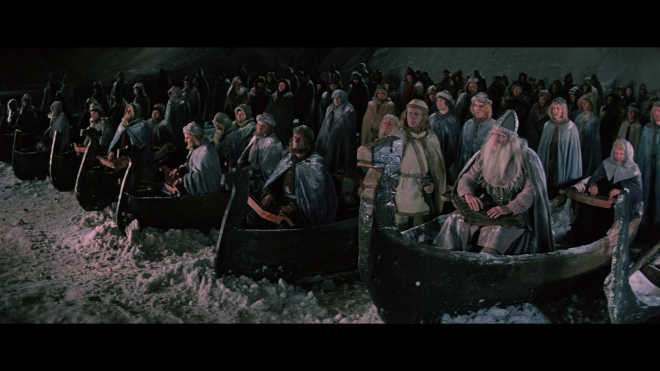 Sampo also enjoys a terrific Finnish DTS-HD MA 5.1 audio mix that is in keeping with the original 4-channel audio elements. This is a big-sounding film with some impressive set pieces and fantasy elements and this mix brings all of those to life. Dialog is clean and clear throughout without issue. The music score is beautiful stuff and livens up the film - especially the big climax! Stretches of the film can feel a little front-loaded, but much of the time there’s plenty of surround activity to keep the soundscape open and engaged. 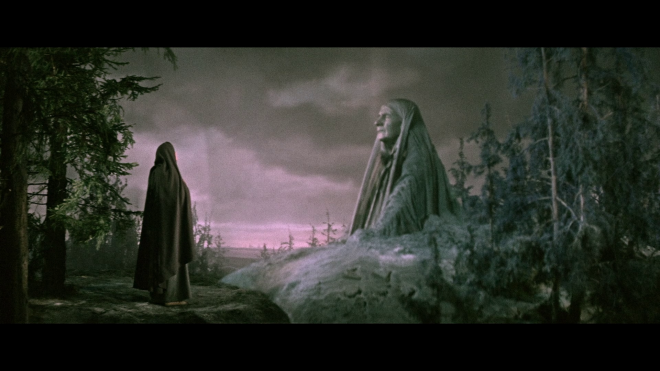 In addition to the very informative booklet, Deaf Crocodile has assembled a pretty great selection of bonus features to pick through. For MST3k fans, or non-fans who want to learn more about the show, there is a great interview with star and head-writer Mike Nelson with author and artist Bob Fingerman and Dead Crocodile’s Dennis Bartok. After that, there’s a very interesting audio commentary with Swamp Thing artist and film historian Stephen R. Bissette that’s well worth the listen. It might not be a massive package, but what you’re getting is some quality material. 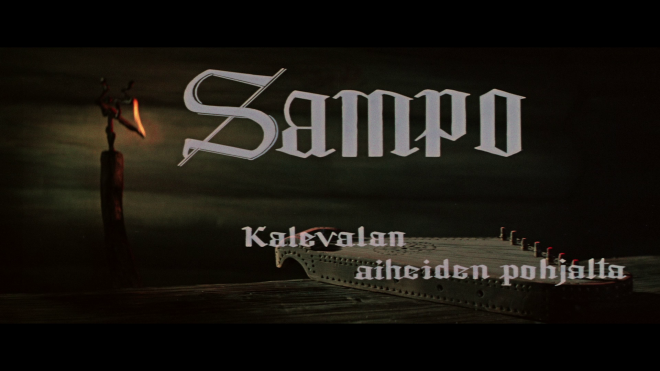 While Sampo may appeal to a fairly niche audience, fantasy and adventure fans should absolutely check this film out. Aleksandr Ptushko’s rich production is bright to life with elaborate visual effects, intricate production values, and a great cast of actors. If you only saw the heavily edited version you haven’t fully enjoyed Sampo!

Deaf Crocodile Films delivers another excellent Blu-ray with this release. The transfer is immaculate with crisp clear details and bold colors complete with an active and engaging audio mix to match. Topped off with some interesting informative bonus features, this is a great disc for the collection. Highly Recommended.