As a rampaging horde of invaders threatens his homeland, the people of Russia will turn to the greatest warrior of all history Ilya Muromets to protect the city of Kiev. Known better in the U.S. as The Sword and the Dragon, this stunning soviet-era fantasy epic was brought to life by Aleksandr Ptushko and filled with fantastic visual effects on a massive scale. Now fully restored by Deaf Crocodile, the film can be fully appreciated in all its glory with a magnificent Blu-ray release. Highly Recommended.

The evil murderous Tugar Tsar Kalin (Shukur Burkhanov) is on the warpath pillaging villages throughout Russia. Without anyone to stop his ambitions, Kalin has his eyes set on the great city of Kiev. Out of the rubble, the great warrior Ilya Muromets (Boris Andreyev) will rise through tragedy and betrayal to lead the great army of Kiev to topple Tsar Kalin and drive back the hoard of Tugars! 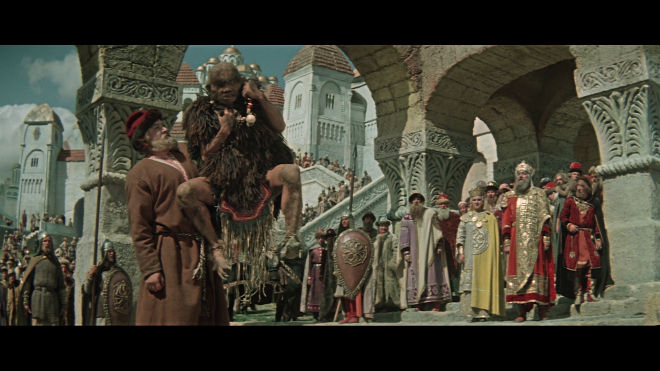 If you’re an avid Mystery Science Theater 3000 fan you’ve seen Ilya Muromets even if you don’t know you have. Better known in the U.S. as The Sword and the Dragon, this film was one of a series of Ukrainian-Russo-Finnish fantasy epics to land on the comedy show. While the domestic dubbed versions of these films were easy fodder for riffing, it was at least friendly and not because the movies were shoddily made or a strain to sit through but because they were so wild, inventive, and actually beautiful pieces of art to come from Soviet-era Russia.

In terms of scale and production value, picture something like The Lord of the Rings trilogy made in pre-CGI 1956. It’s a beautiful combination of on-location filming with thousands of costumed extras with scale models, force perspective miniatures, and beautiful production values. Director Aleksandr Ptushko crafted some of the finest entries in the fantasy genre bringing Sampo (AKA The Day the Earth Froze), and Sadko (AKA The Magic Voyage of Sinbad) to the screen. These are masterclass productions dipping deep into historic folklore for inspiration while expanding the fantasy genre beyond the simple sword and sandal flicks of the era. Those other films may have gone through the MST3k mill, but they’re incredible pieces of work. 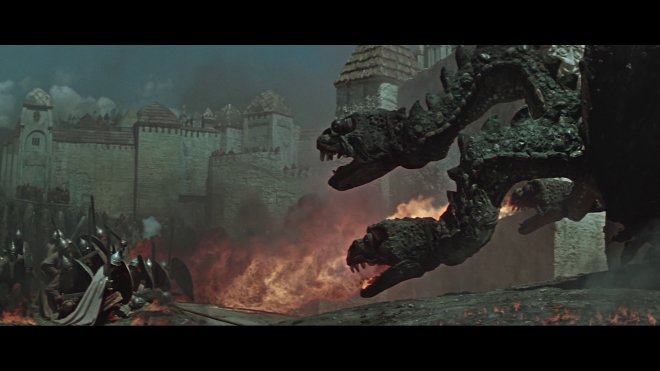 I’d seen the unriffed version of The Sword and the Dragon and it’s at least watchable, but there was always something off about how the film was cut and dubbed for English audiences. Pieces just never made sense as plot points would just stumble together and you’d lose track of entire characters. Restored to its proper length and Russian language, the film proves to be a grand visual feast and highly entertaining. There are some scenes where I was just in awe at how they achieved a shot combining matte paintings with models with optical effects and live actors. Then you get to the scale three-headed dragon puppet which is actually just a gigantic flamethrower!

Watching Ilya Muromets now for the first time with the restored Russian language and English subtitles, the irony of this story was impossible to miss. Here you have a story about a horrible army of invaders destroying Ukraine with their bloodthirsty eyes set upon a near-defenseless Kiev and a simple warrior of great strength rises up to rally the people and fight back against a larger better-equipped army. Given recent global events, this classic piece of Russian folklore is intensely ironic. This once inspirational piece of Soviet-era popular film is actually better suited as a rallying cry for the Ukrainian people today. That little bit of geo-political flavoring was just a nice little extra layer to add to the enjoyment of watching this film as it was meant to be seen.

Vital Disc Stats: The Blu-ray
The folks over at Deaf Crocodile bring the fully restored Ilya Muromets to Blu-ray. Pressed on a Region A BD-25 disc, the disc is housed in a clear case and comes with a booklet containing the essays Russkaya Fantastic part 1 and Wide Horizons by the late Alan Upchurch - they’re great reads so if you love this sort of material definitely jump in and give those a look. If you order from Vinegar Syndrome you can also get a pretty damn stunning limited-edition slipcover. The disc loads to an animated main menu with basic navigation options. 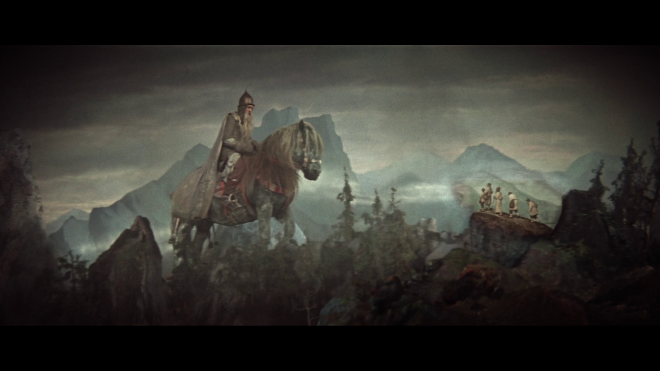 Reportedly restored from the original 35mm CinemaScope elements, Ilya Muromets makes a grand entrance on Blu-ray. This is an often visually stunning film and it’s a real treat having it look so good. I’ve spent years watching cropped version sourced for MST3K and this was the first time I got to experience the full magic and beauty of the production. As I said in the main film review portion it’s often just an incredible piece of work to look at and digest the visual effects and techniques employed to create some of the sequences. With that in mind, some of the heavy visual effects sequences can be quite a bit softer than other sequences so details can fluctuate here and there, but that doesn’t appear to be an issue with the restoration, merely how it was shot. For much of the film full clean crisp details with a natural cinematic film grain presence are on display. Colors are vivid with rich primaries - reds and blues are especially prevalent throughout the film with nice splashes of yellow. Source elements look to have been well taken care of without any signs of speckling or age-related issues to account for. For its first appearance in the U.S., this is a terrific transfer. 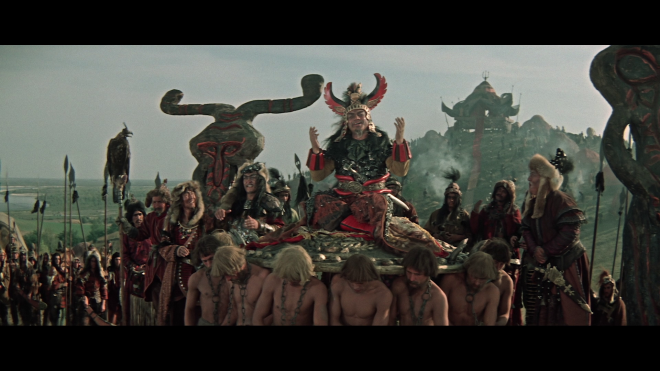 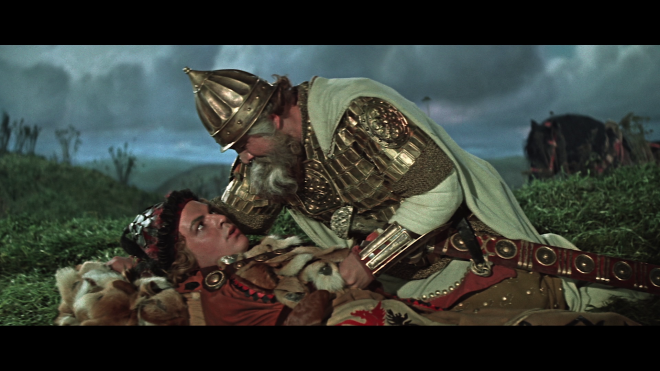 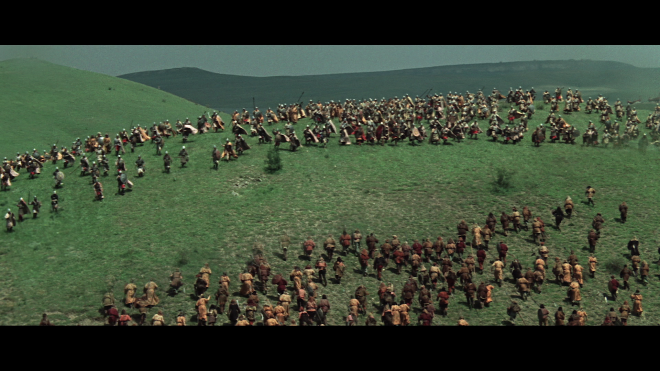 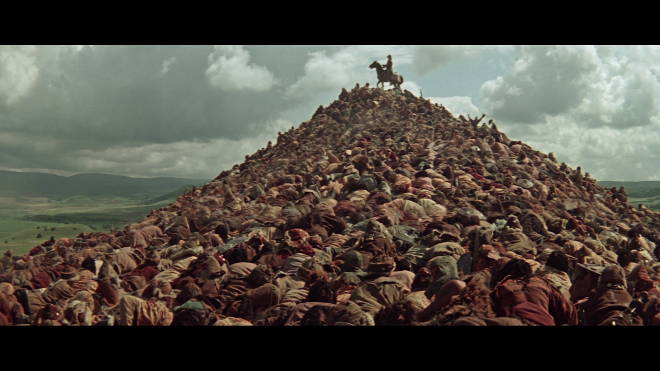 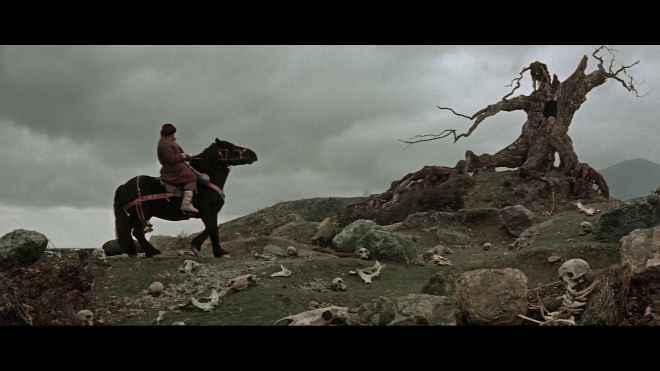 On the audio front we get only a Russian DTS-HD MA Mono track with English subtitles. My understanding of this film is that the only English dubbed version was cut and also included an alternate opening sequence so that track wouldn’t conform to this full-length version. While it’s not as fun as the silly dubbing, this is still a solid track with clean dialog, great scoring, and impressive sound effects. The track is free of any hiss or age-related issues like cracks or pops. 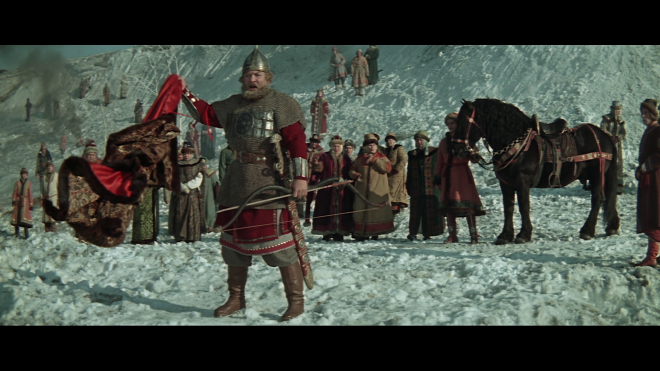 In terms of on-disc bonus features, this may not be the biggest lot ever assembled, but when you toss in the two excellent essays in the booklet you have quite a bit of great material. The audio commentary from Stephen Bissette is a fine and informative listen and well worth digging into. 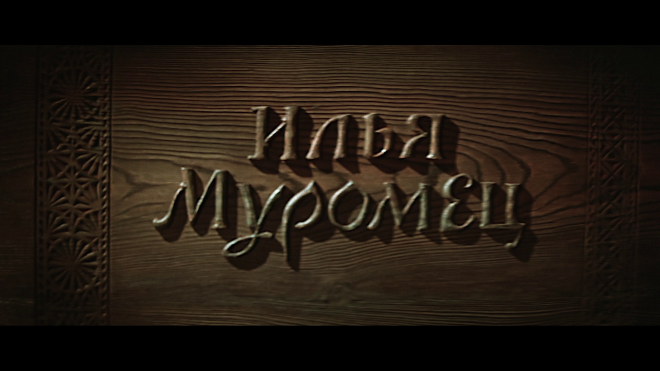 When it comes to large-scale fantasy epics, it doesn’t get much better than Ilya Muromets. For the first time, the true Russian-language version comes to the U.S. on Blu-ray from Deaf Crocodile with stunning results. The image is immaculate showcasing all of the grand visuals of Aleksandr Ptushko crafted for this cinematic undertaking. And given recent geopolitical events, the film proves to be a prescient piece of work very relevant to what’s happening in the world today. Featuring a gorgeous restoration effort with a clean and clear audio mix to match, this disc also comes with two very interesting essays and a nice audio commentary to dig into to round out the bonus features. If you’ve only ever seen the MST3k episode, you haven’t fully experienced the grandeur of Ilya Muromets. As indicated in the booklet it looks like we’ll also get to see a fully restored edition of Ptushko’s Sampo very soon! In the realm of folklore fantasy epics, this one comes Highly Recommended.