A blistering film noir with a reprehensible - and riveting - antihero, Shakedown grabs us from the opening frames and doesn't release its grip until its memorable finale 80 minutes later. Director Joseph Pevney's dazzling debut chronicles the rise and fall of an ambitious newspaper photographer who's willing to do anything - and trample over anyone - to gain fame and fortune. Kino brings this forgotten thriller back to life with a strong remastered transfer, excellent audio, and a superior commentary track. You may not have heard of Shakedown, but once you see it, you won't forget it. Recommended.

Most film noir heroes are regular guys who fall victim to either unfortunate circumstances, nefarious forces, or a sexy femme fatale. Not Jack Early. He's the master of his own destiny. He knows what he wants, how to get it, and won't be deterred, no matter who gets played, hurt, or even killed in the process. Jack is smart, devious, and just as ruthless as a hardened criminal, and he makes Shakedown a riveting - and often surprising - film.

Kino easily could have included Shakedown in one of its numerous film noir collections, but I'm glad someone deemed it worthy of a standalone release, because it's just too good to bundle with other titles. As I watched director Joseph Pevney's auspicious debut, I kept wondering how this taut, tough, often tantalizing thriller flew under my radar all these years and why it doesn't enjoy a loftier reputation within its genre today. I've seen scads of noirs since the 1970s, but was unfamiliar with Shakedown - and frankly didn't expect much from it - when I gave it a recent spin. What starts as a predictable newspaper yarn soon veers off its well-worn path, then takes a series of stunning turns as it rushes toward its explosive climax. Dimensional characters, a snappy script, great acting by a stellar cast, and brisk pacing all contribute to its unqualified success. 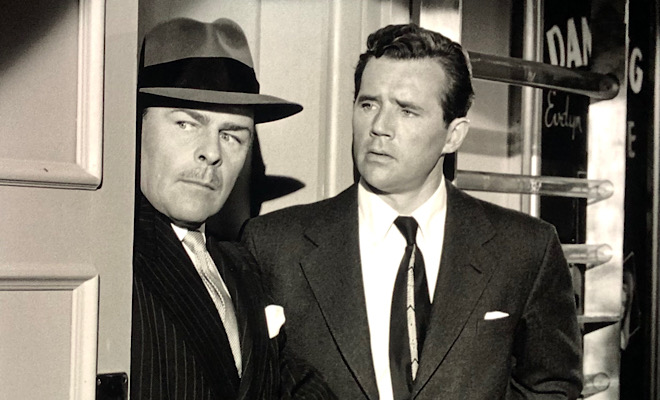 Shakedown charts the upward career trajectory of a novice newspaper photographer, whose charm and tenacity land him a tryout with a San Francisco daily. Jack (Howard Duff) seems affable and sincere, but his insatiable desire for fame and fortune lead him into the world of organized crime. His connections with - and manipulation of - rival kingpins Nick Palmer (Brian Donlevy) and Harry Colton (Lawrence Tierney) allow Jack to get juicy photographic exclusives that bolster his stature and bank account, but his brash egotism, lack of conscience, and heart of stone eventually put him in jeopardy.

A clever plot that takes a few pointed jabs at the newspaper business propels the film, but at its core, Shakedown is a searing character study that becomes ever more disturbing as the picture progresses. Like an onion, the script by Martin Goldsmith (who supplied the original stories for two classic low-budget noirs, Detour and The Narrow Margin) and Alfred Lewis Levitt peels back the layers of Jack's sociopathic personality, exposing the monster lurking beneath his slick, handsome veneer. Jack is likable at first, but a string of reprehensible actions gradually erode our affection until we can barely stomach laying eyes on him. It's rare for a hero to engender such hatred and devolve so seamlessly into a villain, but that's part of what makes Shakedown feel so fresh and vital. What's more, the film doesn't try to redeem Jack, preferring instead to make him the poster boy for an American Dream that morphs into a nightmare. 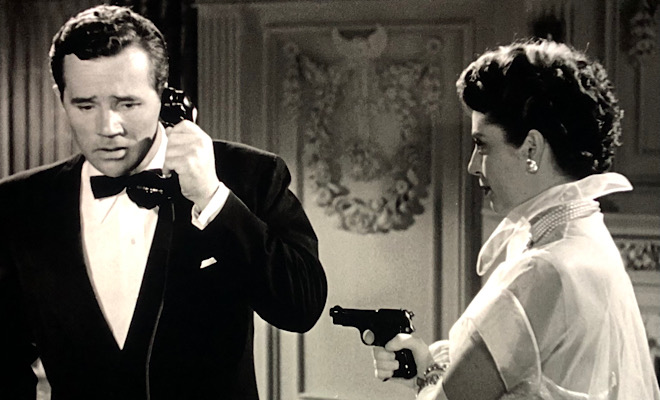 Pevney, who began his career as an actor and appeared in five noir movies between 1946 and 1950 before turning to directing full time (he also makes a cameo appearance in Shakedown's final scene), grabs the film's reins with a confidence that belies his inexperience. With its bold visuals and firm grasp of story and atmosphere, Shakedown feels like the work of an accomplished craftsman, not a novice's first movie. Though Pevney never would become a household name, he would go on to helm a number of A-list films, including Foxfire, Female on the Beach, Tammy and the Bachelor, and the excellent Lon Chaney biopic Man of a Thousand Faces.

He also wrings captivating portrayals from his accomplished cast. Duff is terrific as the ambitious, slimy Jack, cleverly using his good looks, easy smile, and average joe demeanor to hide Jack's true colors. Jack is hardly a church choirboy, but we can't fathom how despicable he is until halfway through the film, thanks to Duff's deft performance. A dapper Donlevy and growling Tierney attack their underworld roles with relish, French actress Anne Vernon adds some exotic allure in her first American film, Bruce Bennett supplies the story's conscience as Jack's disapproving boss, and a young Rock Hudson pops up in a blink-and-you'll-miss-it bit as a doorman. (I was so involved in the film, I didn't even recognize Hudson until I learned of his appearance while listening to the disc's commentary track.) 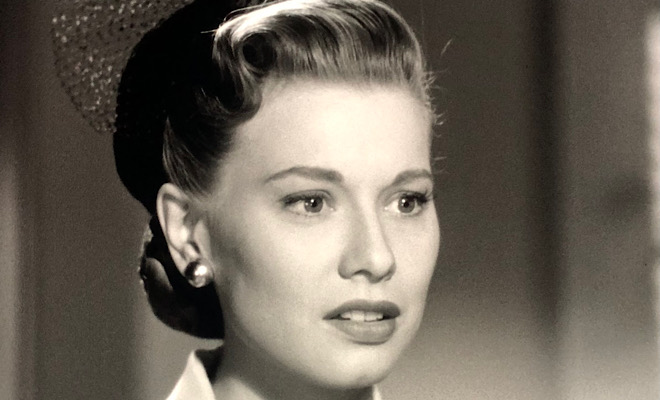 Aside from Duff, the film's best work comes from Peggy Dow as Ellen Bennett, the photo editor who champions Jack, falls in love with him, and (very) gradually becomes disillusioned by his selfish, heartless nature. Dow only made nine feature films (the most famous of which is Harvey) in her far-too-brief, two-year career before abandoning Hollywood for marriage, motherhood, and philanthropic work In Oklahoma. A natural, nuanced, and attractive actress, Dow is a luminous presence in this dark-themed noir, and she makes it impossible to concentrate on anyone else while she's on screen. Had Dow remained in Hollywood, her star almost certainly would have ascended, and while watching her here, it's tough not to rue what might have been. (The good news is Dow reportedly never regretted her decision to leave the industry, and is still with us today at the ripe old age of 94.)

Shakedown is an unexpected gem that delivers far more than it promises. It may not boast a big budget, big stars, or a big-name director, but its involving story, fine performances, and polished presentation make it an ultra-satisfying film experience. If you're a film noir aficionado and haven't yet discovered this diamond in the rough, you're in for a treat. 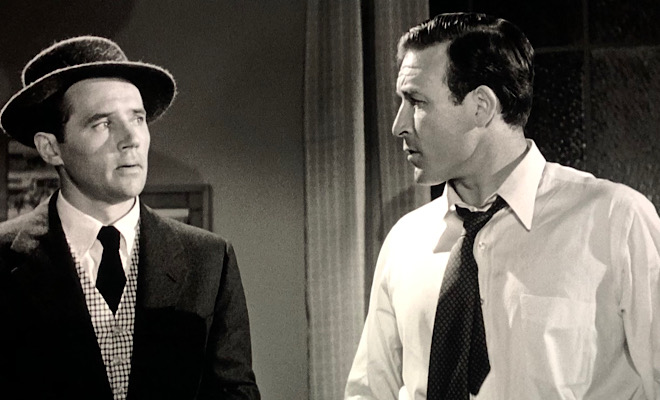 Vital Disc Stats: The Blu-ray
Shakedown arrives on Blu-ray packaged in a standard case. Video codec is 1080p/AVC MPEG-4 and audio is DTS-HD Master Audio 2.0 mono. Once the disc is inserted into the player, the static menu with music immediately pops up; no previews or promos precede it.

A brand-new 2K master puts additional spring in Shakedown's step and heightens the immediacy of this involving film noir. Though some specks and blotches still dot the print here and there, the vibrant image boasts excellent clarity and contrast and exudes a lovely sheen much of the time. Grain levels fluctuate, but the texture is well resolved, lending the picture a marvelous film-like feel. Rich blacks and top-notch shadow delineation combine to produce vivid, detailed nocturnal scenes, while bright whites and nicely varied grays add depth and luster. Sharp close-ups highlight Dow's fresh-faced beauty, Duff's ruggedness, Anne Vernon's allure, and the square-jawed toughness of Donlevy and Tierney. Though not perfect, this high-quality transfer really amps up the atmosphere and intensity that make Shakedown such an involving and entertaining film.

The DTS-HD Master Audio 2.0 mono track supplies clear, well-modulated sound. Sonic accents like ringing telephones, the clatter of teletype machines and typewriters, screaming sirens, screechy wheels, gunfire, fisticuffs, and a huge explosion are all crisp, while atmospherics like newsroom noise and the din of the Frisco cityscape are pleasingly distinct. A wide dynamic scale embraces the highs and lows of the music score without any distortion, and all the dialogue is well prioritized and easy to comprehend. Any age-related hiss, pops, or crackle have been erased and no distortion intrudes. Sound plays a big role in Shakedown, and this track renders it well.

Aside from a few trailers for other movies (one for Shakedown is not included), the only extra is an audio commentary by professor and film scholar Jason A. Ney, who's fast becoming one of my favorite classic film analysts. Ney delivers his insightful and informative remarks in an affable manner laced with wry humor, and he really does his homework on the movies, actors, and technicians he discusses. In this commentary, he reveals a connection between Shakedown's protagonist Jack Early and real-life photographer Weegee, and includes some rare audio from Weegee about the journalistic profession. Ney also supplies background on the little-known Peggy Dow, examines the alcoholism and legal troubles that plagued Lawrence Tierney, points out the cameo by director Joseph Pevney at the end of the film and the blink-and-you'll-miss-it moment when a young Rock Hudson appears as a doorman, notes some deficiencies in the script, and puts the film in its proper noir and historical context. If you enjoy Shakedown, you should definitely give this excellent track a listen.

Though it's flown under the radar for decades, Shakedown at last gets the attention it deserves. A strong remastered transfer and solid audio distinguish Kino's Blu-ray presentation of director Joseph Pevney's nasty noir about an opportunistic photojournalist who will stop at nothing to get ahead. Top-notch performances from a stellar cast heighten the impact of this slick, low-budget crime drama that captivates from beginning to end. Recommended.