Political intrigue, betrayal, peril and forbidden romance play out in this lavish, critically acclaimed historical epic set in the royal palace of Korea s ancient Joseon Dynasty, when a lowly peasant is forced to masquerade as the tyrannical king, who has fallen ill.

When it comes to the world's leaders, the often-unfulfilled expectation is that they will be forthright, honest, and trustworthy; they will put the needs and the interests of the people above all else, and they will be immune to the machinations and influence of the wealthy, and the ruling class. When it comes to the manner in which leaders are depicted in entertainment – especially something as middlebrow as 'Masquerade' – the expectation, then, is augmented, and suddenly the charisma and nobility of the leader in question must become markedly amplified. It must progress well beyond the standards of even the most idealistic individual and reach, without a hint of irony, for a station approaching divinity. Of course, those expectations are different when the leader in question is elected through a democratic process. There's some leeway there in terms of fallibility; the expectations for honesty, and faithfulness to the people remain the same – he or she is, after all, only human – but when the story is dealing with a king or any other ruler who was "chosen" by some higher power, the inherent shortcomings of the sovereign ruler are similarly magnified.

That dichotomy between the idealized representative of the people and the often-despotic truth of those with absolute power is at the heart of the 2012 Korean costume drama 'Masquerade.' This lavish production tells the tale of King Gwanghae (Byung-Hun Lee, 'I Saw the Devil,' 'G.I. Joe'), a once-promising ruler caught between a need to fulfill his own prurient desires, and to bend to the will of his advisors – all of whom only represent the interests of the wealthy. When the film begins, Gwanghae is at the height of his power, but he is rapidly reaching the depths of his own depravity. The king spends his evenings with his mistress, who pours proverbial hemlock in his ear, convincing the king to ignore his queen (Hyo-ju Han), and do the bidding of his corrupt council. Whispers of assassination gradually increase and must be taken seriously, prompting Gwanghae to send his people in search of the perfect double – which they find in the form of the lowly peasant Ha-seon (also Lee), who, coincidentally not only styles his facial hair in the exact same manner, but is also an accomplished actor with, you guessed it: an uncanny gift for mimicry.

If you were thinking aspects of the plot awfully reminiscent of the 1993 Ivan Reitman comedy 'Dave,' you'd be spot on. This tale of a tyrannical king and his morally upstanding, highly romanticized stand-in actually follows many of the same story beats as the now 21-year-old film starring Kevin Kline and Sigourney Weaver, but strives to keep the narrative working within the confines of a drama. 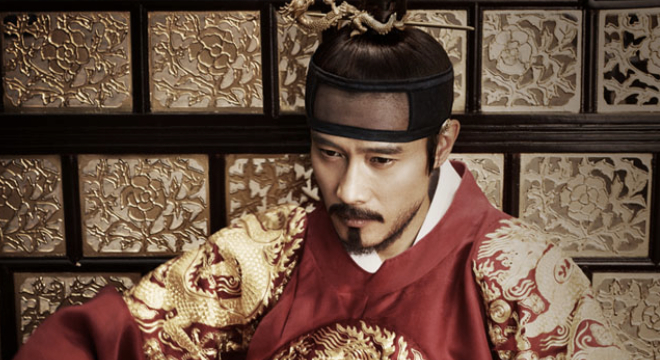 Here, when Gwanghae is taken ill, his closest advisor, known only as Eunuch (Gwang Jang), sends for Ha-seon, demanding his nights and weekends of filling in for the king take on a larger role – one that could ostensibly become permanent, should Gwanghae succumb to the suspicious illness that has befallen him. Following a lengthy, but entertaining set up, 'Masquerade' abruptly (and welcomingly) shifts its tone from a somewhat leaden period drama, to a more familiar, humorous, and surprisingly crass fish out of water tale. Ha-seon soon finds it's good to be the king, but it's not without some invasive drawbacks. For one, his morning bowel movements are given audience by a gaggle of young women who congratulate his highness upon completion, and cart off his deposit as though they were transporting precious jewels. The king's meals are also given audience, which leads to an early misunderstanding wherein Ha-seon, unaware his kitchen staff is only allocated the food he does not eat, consumes everything at the table.

These small moments are the initial brushstrokes that paint Ha-seon as a fundamentally different man than Gwanghae. Ha-seon is demure, empathetic, and, deferential, even to those technically beneath him. Despite being asked to drift between extremes, Lee wisely keeps his performance(s) narrow, and subtly portrays the difference in the characterizations of king and peasant. Regrettably, the narrative moves with broader strokes, pushing Ha-seon into a realm of political intrigue and corruption, where doing the right thing for the people will likely cost him his life. While Lee busies himself with a demonstration of one man's world suddenly being upended, director Choo Chang-min strives mightily to underline every instance in which the corruption of the king is ostensibly seen as an unfortunate truth about those who wield power, and what little attention is paid to the underprivileged and poor.

The broadness of the narrative's tenor effectively undermines what is otherwise a fine performance from Lee, by shouting over the subtlety of his characterization with unnecessarily loud declarations that were already highlighted by the inherent nature of the film. This need to emphasize the weight and significance of Ha-seon's innate qualities and draw a distinction between his actions and the reactions of those in the political sphere leaves too little time left for interesting subplots concerning Gwanghae's forgotten wife, a servant girl separated from her family, and a loyal bodyguard who discovers Ha-seon's secret.

Still, what 'Masquerade' lacks in subtlety and nuance, it makes up for with some truly amazing aesthetics, cinematography, and opulent set design that places the audience in a richly detailed environment, giving them plenty to enjoy, in between the heavy handed denunciations of political corruption. 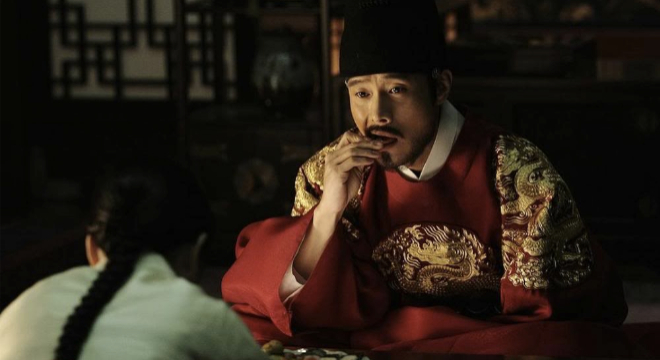 'Masquerade' comes from CJ Entertainment as a single 25GB Blu-ray disc in the standard keepcase. There're no previews ahead of the top menu, and sadly, no special features to speak of.

'Masquerade' is your standard period or costume drama, and as such, the lavish set design and costuming becomes one of the key elements of the film. The 1080p AVC/MPEG-4 encoded transfer does a remarkable job of bringing out the most minute of details in both, while maintaining a high level of detail everywhere else. The image is also crisp and bright, offering clean edges along with all the fine detail and texture. Colors are emphasized as much as texture, giving much of the film a bright, lively feel that is expressive without being too gaudy or overbearing. Contrast is also quite high, presenting robust black levels that are free from crush or banding of any kind. Shadow delineation is superb, displaying an even separation between tones that keeps detail present even during the many nighttime sequences.

The image is pristine throughout, offering fantastic and consistent levels of detail. Additionally, wonderful attention is paid to the importance of color and depth of field, while superb contrast keeps the image from looking too washed out or allowing the inky blacks to swallow up the subtleties of the picture. This is a sublime image that comes for a film truly deserving of one.

Surprisingly, 'Masquerade' is only offered with an original Korean Dolby Digital 5.1 mix, or a dubbed English Dolby Digital 5.1 mix. Still, the sound manages to be quite good, focusing primarily on dividing its efforts between the rich musical score and the actors' dialogue. In that sense, voices are all crisp and easily understood. Unsurprisingly, they sound much more present and defined on the original Korean language track. Much of the dialogue comes through the center channel speaker, though there are plenty of instances where voices will be spread out across the rear channel speakers do good effect. Similarly, music is focused primarily through the front right and left channels, but it, too, will occasionally venture over to the rear speakers to provide a more immersive listening experience.

Directionality and balance are used to good effect here, though some of the finer elements seem to get lost a bit in the shuffle. Smaller sound effects tend to dissipate quickly when the score rises, leaving one heavy element, when it seems as though the film was looking for more. There are plenty of examples when atmospheric effects sound terrific, however, creating crowd sequences that envelope the listener in a sea of quarreling voices to great result.

Overall, this is a good, quality audio mix that delivers where it needs to, but occasionally feels as though it could have benefited from more oomph.

'Masquerade' does not offer any supplemental features.

As mentioned above, 'Masquerade' will strike some as being quite similar to 'Dave' in terms of plot, and, in some ways in tone. But this 2012 Korean feature is far more interested in presenting a beautiful aesthetic of a bygone era, while also pointing out with a heavy hand many of the problems with political discourse that still exist today. While the film would have benefited greatly had the various subplots involving female characters been fleshed out more, Byung-Hun Lee delivers an entertaining and strong performance that the film easily hinges on. With a practically perfect image and surprisingly good sound, the only thing this disc is missing is some informative extras. Still, despite a dearth of special features, this one come recommended.

Sale Price 11.99
Buy Now
3rd Party 3.71
In Stock.
See what people are saying about this story or others
See Comments in Forum
Previous Next
Pre-Orders
Tomorrow's latest releases