Framed for crimes against the country, the G.I. Joe team is terminated by the President's order, and the surviving team members face off against Zartan, his accomplices, and the world leaders he has under his influence.

As originally planned, the action sequel 'G.I. Joe: Retaliation' was scheduled for a theatrical release on June 29th, 2012. Because the studio had postponed the troubled production of Brad Pitt's zombie epic 'World War Z' for extensive rewrites and reshoots, 'G.I. Joe' was to be Paramount's only tentpole picture with a budget over $100 million for the entire year. Trailers for the movie aired during the Super Bowl. In the weeks leading up to its premiere, director Jon M. Chu gave numerous interviews excitedly promoting his film, which was presumably completed and ready to go at that point. Unfortunately, those plans ground to a screeching halt just four weeks before release day, when Paramount unceremoniously yanked the movie from its 2012 calendar and delayed its debut for nine months, to March of 2013.

Officially, Paramount's publicists claimed that the delay was necessary to give the movie a 3D conversion. However, rumors quickly spread that the studio had actually panicked due to poor test screening feedback and needed time to rework the picture. Whatever the real cause may be, the ploy apparently worked. When it was finally released in early 2013, 'Retaliation' performed better than many expected and delivered solid box office returns, enough so that another sequel is currently in development.

As a longtime G.I. Joe fan, I found 'Retaliation' to be a mediocre, disappointingly tepid action movie. Regardless, it was a big improvement over its predecessor, Stephen Sommer's dreadful 2009 'G.I. Joe: The Rise of Cobra', and actually felt like the G.I. Joe franchise had appeared on screen in some recognizable fashion. With luck, it may lead the way to further improvement in future entries.

By the time it hit home video in both 2D and 3D forms, a mysterious third version of 'G.I. Joe: Retaliation' called the "Extended Action Cut" surfaced at retail with little fanfare as a Best Buy exclusive. With a running time 13 minutes longer than the theatrical edition, some rumors have claimed that this is actually director Jon Chu's original cut of the film that was supposed to be released in 2012. I cannot confirm that assertion. In fact, I have some reasons to doubt it. Nevertheless, despite being somewhat burned out on the movie after seeing it once in the theater and twice more on Blu-ray (2D and 3D), I was curious to see whether the extended version made the film any better or worse. Is it true that the movie was an even bigger mess until Paramount fixed it? Or did the studio's last-minute tinkering take something perfectly serviceable and dumb it down for the masses?

Honestly, the Extended Action Cut of 'Retaliation' has both positive and negative qualities compared to the theatrical version. Unfortunately, it doesn't start well. This cut has two new scenes at the beginning (one pre-credits and one post-credits) that absolutely kill the movie's pacing. I assume that the new pre-credits scene in which the Joes have a party and joke around after their successful mission is intended to help us get to know (and hopefully like) the characters a little bit more before killing some of them off, but it isn't necessary and its placement destroys Roadblock's "Motherf..." joke, which doesn't land at all now. It also makes the actual credits sequence, which introduces the characters again, redundant.

Immediately after the opening credits, we get a much longer ninja training sequence with Snake Eyes and Jinx. In the theatrical cut, this scene was badly condensed and moved to later in the movie. The purpose of the scene is clearer here, and it gives Jinx a character arc that was almost entirely dumped in the other version. On the other hand, it feels too long and awkwardly disrupts the transition to the following scene. The beginning of the theatrical cut flows much better. Also, the storyline about Jinx constantly needing to prove herself to Snake Eyes has the unintended consequence of making Snake Eyes come across as kind of a prick. I assume that's why this part of the movie was whittled down in the theatrical release.

A gag involving the President's kid is stupid and should have remained on the cutting room floor. A new subplot about Roadblock going rogue also doesn't really work. Most of the other additions are hit-or-miss, and neither help nor hurt the movie significantly.

The only place the Extended Cut is indisputably better is the final confrontation between Storm Shadow and Zartan, which is actually coherent in this version whereas it feels chopped up in the theatrical cut.

After the film's postponement in 2012, rumor had it that the test screening audiences wanted more Channing Tatum, and that the studio demanded reshoots to give the actor more screen time. Yet every scrap of footage of Tatum seen in the theatrical cut is also in this version. In fact, the Extended Cut has even more of him, because he has one more scene and one additional line of dialogue in an existing scene. Either the rumors of reshoots were false, or this Extended Cut is not the version of the movie that was supposed to open in 2012, but rather a hybrid put together after the fact. I don't know which is true.

In the final analysis, the Extended Action Cut of 'G.I. Joe: Retaliation' is a mixed bag. While it fixes some of the theatrical cut's problems, it makes other parts worse. Ultimately, I don't believe it will change anyone's opinion of the movie. Both versions get the same rating from me. Overall, I think I'll default to watching the theatrical cut.

The theatrical cut of 'G.I. Joe: Retaliation' was released to general retail on July 30th, 2013 in two options. A 2-disc set contains both a (2D-only) Blu-ray and a DVD, while a 3-disc set adds a Blu-ray 3D disc to that. (I reviewed the 3-disc set here.) At the time of this writing, the Extended Action Cut is available exclusively through Best Buy in the United States. Overseas, it can be obtained at Amazon UK.

In other respects, the Blu-ray is similar to the theatrical cut release. If your Blu-ray player has BD-Live enabled, the disc will stream a forced trailer before the main menu. The menu itself offers the choice of G.I. Joe or Cobra themes, both of which are identical to the general retail Blu-ray.

Don't be misled by the fact that this review shows a higher star rating score than the 3-disc theatrical cut release. As I explained in my previous review, the 4-star video score there was a composite rating for both the 2D image quality (which I thought was terrific) and the 3D image quality (which I was less impressed with). The rating here is only for one version of the movie.

The 1080p/AVC MPEG-4 transfer for the Extended Action Cut is mostly identical to the 2D theatrical cut release. The 2.40:1 picture is rich and contrasty, with vividly saturated colors and inky black levels that don't compromise shadow detail. It's also exceptionally sharp and detailed.

The movie was shot on 35mm film. Grain structure is preserved without any artificial Noise Reduction filtering. The grain is more prominent in dark scenes than bright ones, but it adds an appropriate filmic texture.

With that said, the digital encoding of the Extended Action Cut suffers some noise issues that aren't present on the theatrical cut. For example, in a brief shot at approximately time code 1:51:30, Snake Eyes' black uniform crawls with macroblocking artifacts. These problems are fleeting, and the disc looks great overall, but it's held back from perfection just a bit.

The Dolby TrueHD 7.1 track on the Extended Action Cut is every bit the equal of that on the theatrical cut disc. The mix has hyper-aggressive surround activity and thunderous explosions, yet never feels swamped or bloated with bass. Dialogue is always clear and sound effects are crisply rendered. The shriek of metallic ninja swords clashing pierces the high end just as effectively as the dubstep music thumps in the low end.

Personally, I'd prefer an action movie soundtrack to be a little less bombastic, and to better balance quiet moments (even the lengthy dialogue-free passage here is noisy as hell) with all the sound and fury. By the end of the picture, I'd started to feel that the droning score and the assaultive sound effects had worn me down. However, that's more of an artistic issue than a technical one, and I can't fault the disc for it.

Sadly, the Extended Action Cut disc is missing supplemental content found on the general retail Blu-ray release. This is all that carried over:

As mentioned above, the G.I. Joe: Declassified documentary has been shorn of two segments without explanation. The Extended Action Cut disc is also missing the audio commentary found on the theatrical cut. I assume that the commentary wasn't recorded with this version of the movie in mind and couldn't be edited to fit. Fortunately, as I mentioned in my earlier review, the commentary wasn't very good anyway. It's not much of a loss.

A part of me hoped that the Extended Action Cut would make 'G.I. Joe: Retaliation' into a less mediocre movie. Sadly, while it fixes some of the film's problems, it adds new ones. I doubt it will win over any new converts who didn't already like the movie before. In fact, on balance, I think I'd rather watch the theatrical cut.

At the very least, the Blu-ray still looks and sounds pretty terrific, even if it loses some bonus features.

Do I recommend the disc? For completist G.I. Joe collectors and curious fans, perhaps. Everyone else can suffice with the standard theatrical cut (and likely just a rental of that). 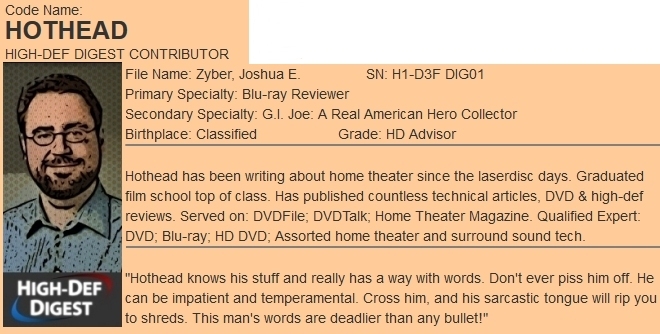