The Scarlet Hour travels a well-worn film noir path, but slick direction from Michael Curtiz, spirited performances from a fascinating cast, and a jaw-dropping transfer freshen up this taut tale of infidelity, greed, and murder. Excellent audio and a first-rate commentary track also distinguish Imprint's release of this little-known but surprisingly potent movie. Though a far cry from Double Indemnity and Out of the Past, The Scarlet Hour delivers solid entertainment and makes a great addition to any noir collection. Recommended.

The Scarlet Hour may not reside on anyone's short list of film noir classics, but like a femme fatale it exudes an elegant allure that transcends its pedestrian story. Credit director Michael Curtiz, the man behind such immortal films as Casablanca, The Adventures of Robin Hood, and Yankee Doodle Dandy, with infusing this Double Indemnity wannabe with visual style and enough tension to keep us hooked for 95 minutes. Though it resembles countless other movies in the noir realm, The Scarlet Hour carves out its own niche, thanks to its quality production values, lush cinematography, trio of unknown leads, and some colorful performances from its supporting cast.

When illicit lovers Pauline "Paulie" Nevins (Carol Ohmart) and E.V. "Marsh" Marshall (Tom Tryon) overhear three men plotting the robbery of a ritzy mansion in the Hollywood hills, Paulie begins to hatch a devious plan of her own. Stuck in an unhappy, abusive marriage with Marsh's boss Ralph Nevins (James Gregory), Paulie needs cash to get away from him...and maintain her luxury lifestyle. "I've been poor," she tells Marsh. "I hate it." She suggests they surprise the thieves as they flee the scene and steal the stash of jewels they've just swiped. "There's nothing wrong with robbing thieves," she tells the straight-arrow Marsh.

Faced with the end of their torrid affair, Marsh reluctantly agrees to go through with her scheme, but the ever-more-suspicious Ralph mucks up the works, leading to a violent showdown. The ensuing police investigation drives a wedge between Marsh and Paulie, and as tensions rise and their relationship unravels, Marsh seeks solace with Ralph's attractive secretary Kathy Stevens (Jody Lawrance) while Paulie tries to save her own skin. 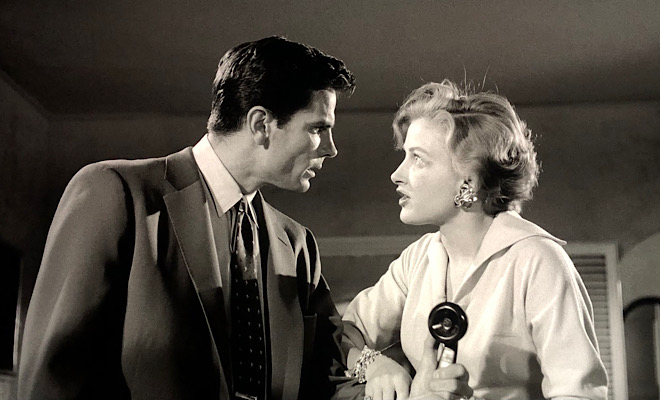 The three leads all made their film debuts in The Scarlet Hour, and despite their relative inexperience, they inhabit their roles well. Tryon, who would have a mildly successful acting career before becoming a blockbuster novelist (his books The Other and Harvest Home were adapted into a successful film and TV miniseries, respectively), is a strapping specimen, but comes off a bit stiff as the perpetually beleaguered Marsh. Ohmart, with her throaty voice and smoldering glances, exudes both sex appeal and a fiery resolve as the passionate Paulie (a poor man's Phyllis Dietrichson), while the platinum blonde Lawrance does what she can with a ho-hum part. 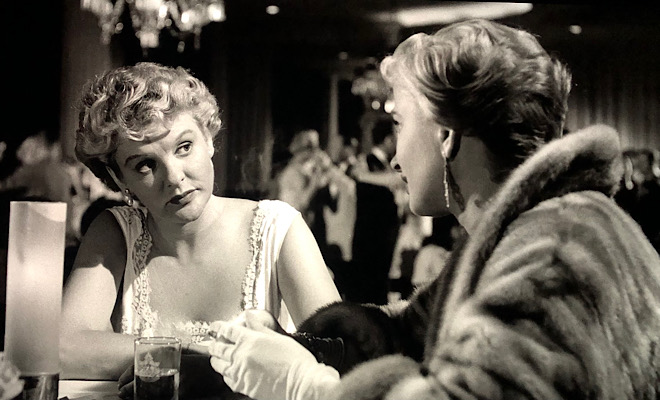 Most interesting is the supporting cast that provides much-needed fuel to the film's engine. Leading the charge is the magnetic Elaine Stritch, also making her film debut, as Paulie's good-time gal pal. Most of us know the raspy-voiced Stritch from her stage and TV work and remember her as an indomitable force of nature in her golden years, so it's a treat to see her as a hot-to-trot 31-year-old knocking back cocktails with blissful abandon and delivering zippy one-liners with her distinctive dry wit. Stritch steals every scene in which she appears and rivets our attention every moment she's on screen.

The great E.G. Marshall, a year before his searing portrayal in 12 Angry Men, also pops up as the just-the-facts-ma'am chief investigator; James Gregory, who would memorably portray the smarmy, hen-pecked Senator Iselin in The Manchurian Candidate, is tough and menacing as Ralph; and then there's Nat "King" Cole, whose velvety rendition of "Never Let Me Go," the movie's recurrent theme (once heard, it's tough to get it out of your head), in a nightclub scene provides a brief respite from all the skullduggery. Though the interlude puts the plot on pause and feels a bit out of place, it adds some class to a down-and-dirty story and gives one of the finest jazz singers in history a chance to strut his stuff. 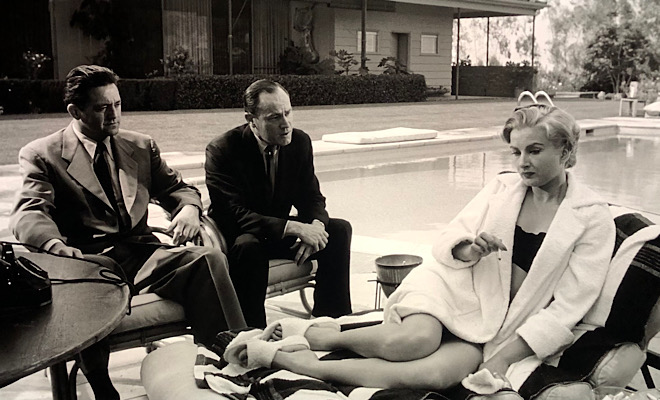 The Scarlet Hour may not have much of a reputation in rarefied noir circles, but with all the talent on display and maestro Curtiz conducting the action, it's worthy of attention. Slick, a little steamy, and just nasty enough, it's a respectable genre flick that hits the right notes and keeps us on board while the ride lasts. I wasn't familiar with The Scarlet Hour before this viewing, but I'm sure I'll revisit it and am happy to have this well-made, entertaining noir in my collection.

Vital Disc Stats: The Blu-ray
The Scarlet Hour arrives not only on Blu-ray, but on physical media for the first time packaged in a standard clear case inside a sturdy, glossy slipcase. Video codec is 1080p/AVC MPEG-4 and audio is DTS-HD Master Audio 2.0 mono. Once the disc is inserted into the player, the static menu with music immediately pops up; no previews or promos precede it.

Absolutely gorgeous. That's the simplest way to describe this breathtaking 1080p/AVC MPEG-4 transfer from Paramount Pictures. Shot in VistaVision, Paramount's enhanced definition widescreen process, The Scarlet Hour looks so crisp and clean, it's tough to believe it's a 66-year-old film. While Paramount's transfer of The Desperate Hours, another black-and-white VistaVision film also recently released on Blu-ray by Imprint, suffers slightly from print damage, not a single nick, scratch, or speck of dirt mars The Scarlet Hour's pristine source material. The vibrant, balanced, and silky image remains consistent throughout and shines a spotlight on the striking cinematography by Lionel Lindon, who would win an Oscar for his next film, Around the World in 80 Days. 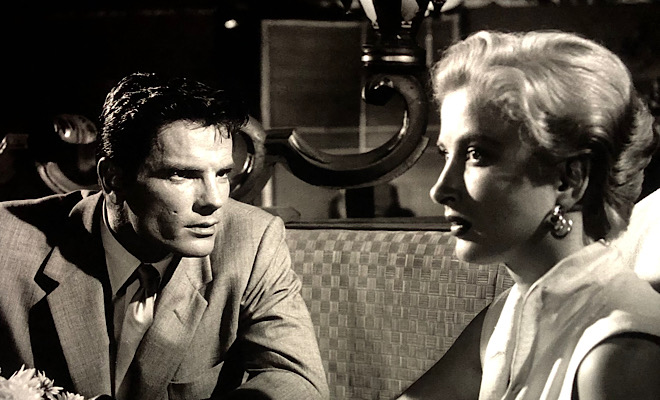 Excellent clarity and contrast, inky blacks, bright, stable whites, and wonderfully varied grays produce a vivid, dimensional picture that brims with depth. Faint, beautifully resolved grain preserves the feel of film, terrific shadow delineation punches up nocturnal scenes and enhances the movie's noir flavor, and razor-sharp close-ups showcase the distinctive pockmark on Tryon's cheek, the droplets of water on Ohmart's shoulder after a shower, and Lawrance's peaches-and-cream complexion. The Scarlet Hour may not be a well-known film, but Paramount has blessed it with one of the best 1080p classic movie transfers in recent memory. 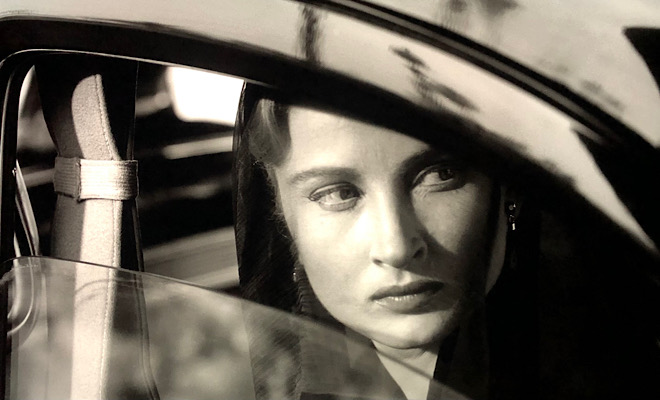 The DTS-HD Master Audio 2.0 mono track supplies clear, well-modulated sound that's free of any age-related hiss, pops, or crackle. A wide dynamic scale embraces all the highs and lows of the music score by three-time Oscar nominee Leith Stevens and excellent fidelity helps Nat "King" Cole's silky vocals fill the room with ease. Sonic accents like gunfire, sirens, revving car engines, the jangling of a bracelet, and the exploding lid of a tea kettle are distinct, no distortion is present, and all the dialogue is well prioritized and easy to comprehend. This solid track is largely unobtrusive, but it asserts itself when necessary.

The Scarlet Hour can't compete with the best noir films and will never be regarded as one of director Michael Curtiz's best movies, but it's an entertaining, well-made genre curio that features a colorful cast, solid script, and plenty of cinematic style. A dazzling transfer immerses us in this slick tale of infidelity, greed, and murder and heightens its impact. Excellent audio and a stellar commentary track also distinguish Imprint's limited edition Blu-ray that noir fans should seriously consider importing. Recommended.