Margaret Sullavan's luminous performance and Frank Borzage's lyrical direction bolster the appeal of Little Man, What Now, a simple yet affecting tale chronicling the struggles of a young and often impoverished married couple in Germany just prior to the rise of Adolf Hitler. A brand new 2K master showcases Borzage's lush visuals, but the antiquated audio track struggles to balance all the competing sonic elements. A lively commentary completes Kino's welcome Blu-ray presentation of another rare Golden Age classic. Worth a Look.

Margaret Sullavan only made 17 feature films in her far-too-brief Hollywood career, but almost all of them are noteworthy, largely because of her consistently luminous work. Difficult, demanding, and mercurial on the set and off, Sullavan was a dynamo whose wispy frame, delicate features, and breathtaking loveliness often belie the inner strength of the stalwart women she portrays. One of those women is Emma Pinneberg, affectionately called Lämmchen by her husband Hans (Douglass Montgomery), in director Frank Borzage's Little Man, What Now, a simple yet affecting tale of a young couple who strive for stability and security in an uncertain world.

The time is the early 1930s. The place is Germany. As the film opens, Lämmchen is visiting a doctor, presumably to seek an abortion, but is turned away. She and Hans accept her pregnancy and solidify their relationship by getting married, yet life is far from a bed of roses for the couple as they struggle valiantly to make ends meet. Germany's lousy economy and social unrest make it difficult for Hans to provide for his wife and unborn child, but he perseveres, often swallowing his pride and degrading himself in an effort to keep Lämmchen happy and healthy until their baby is born. Circumstances force the couple to move in with Hans' stepmother, who they later discover runs a high-class brothel with the suave and disreputable Holger Jachman (Alan Hale), who seems to take more than a casual interest in the lovely Lämmchen. 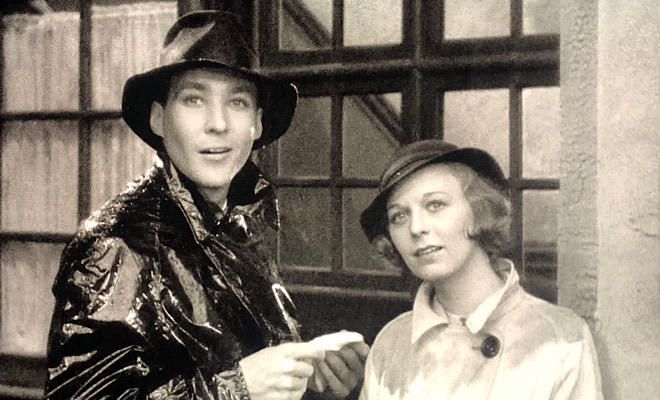 The episodic tale, which spans the length of Lämmchen's pregnancy, provides glimpses of a turbulent Germany still reeling from the effects of World War I. Poverty and angst are everywhere, and those in a position of power abuse their privilege for their own personal gain. Like Lämmchen and Hans, the country is depressed and aimless, and seeks a guiding hand to ground it and lead it forward. Sadly, the hand that would soon grab Germany's reins belonged to Adolf Hitler, and though the film's hopeful ending pre-dates the bigotry, hatred, and genocide his reprehensible regime would soon bring, it's tough to swallow the exhilarating optimism from our current vantage point when we know what lies around the bend.

Little Man, What Now is one of those films that demands a second viewing to fully appreciate its nuances. The wispy narrative often meanders, and though both Hans and Lämmchen instantly win our sympathy and affection and we identify with their plight, it's only when we can take a step back and view the movie in a larger historical context that the pieces fall into place. It's hard to watch the couple endure bad break after bad break and make misguided yet very human decisions while in the throes of poverty, but their abiding love and commitment help them weather the storms that continually beat them down. 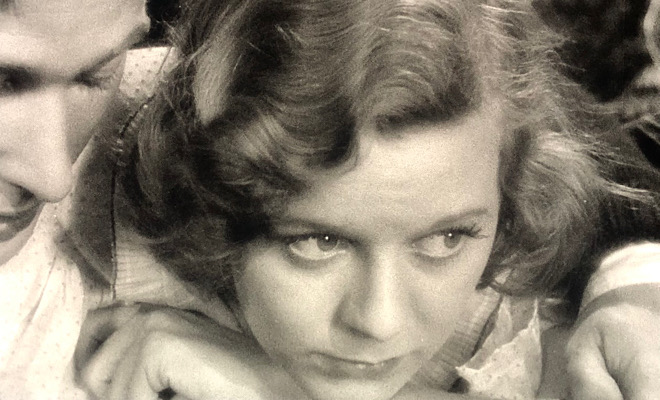 Few directors depict the hard knocks of life with more beauty and sensitivity than Borzage, who won the very first Academy Award for Best Director in 1927. A veteran of silent films, Borzage developed a strong, lyrical visual sense that served his sound pictures well, especially those produced during the dawn of the talkie era. His intent focus on intimate moments, ability to capture the emotional core of his tales and deft integration of setting makes many of his movies sensory feasts that delight the eye and tug at the heart. Extreme close-ups, a mobile camera, and innovative shots (a scene photographed aboard a moving merry-go-round in Little Man, What Now is especially memorable and exhilarating) define his work, yet he rarely allows his technique to eclipse his characters and the conflicts that consume them.

Little Man, What Now marked the first of four films Borzage would make with Sullavan (Three Comrades, The Shining Hour, and The Mortal Storm are the other three), and his style complements her persona, which quite possibly he also helped to create. Little Man, What Now was only Sullavan's second feature, and at age 24 she was still finding her footing on film. Under Borzage's guidance, she blossoms, exuding serene confidence in almost every scene. Women were not allowed to be visibly pregnant on screen at the time, but Sullavan and Borzage keep us mindful of Lämmchen's condition through her fatigue, hunger, and mood swings. On the flip side, because the Motion Picture Production Code was not yet in full force, we do see Hans and Lämmchen sharing the same bed, something that soon would be verboten. 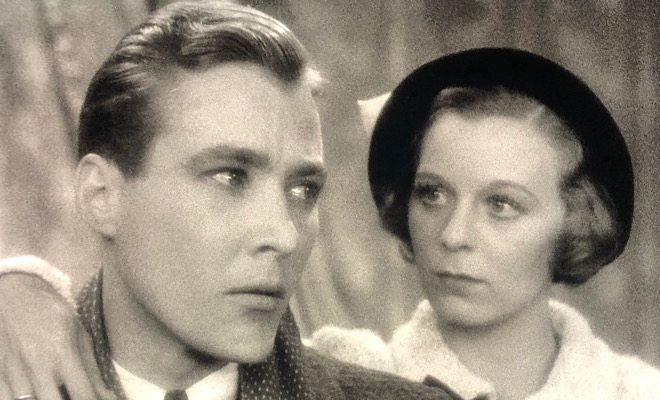 Montgomery, who was briefly forced to change his name to Kent Douglass while he was a contract player at MGM to avoid confusion with the studio's more famous and valuable Robert Montgomery, files an equally vital and sincere performance. Though he would never attain the level of stardom of Gable, Tracy, or Cooper, Montgomery was a good actor who deserved better roles, and his excellent turn in Little Man, What Now and marvelous chemistry with Sullavan greatly enhance the film.

Little Man, What Now may not stand as one of Borzage's or Sullavan's best pictures, but it's a finely mounted drama with many touching and memorable moments. Borzage's artistry and Sullavan's magnetism carry the tale across the finish line (the movie's final scene is precious), and classic film fans should be grateful Kino has restored and released such a rare curio that allows us to absorb and appreciate the talents of two superior craftsmen. 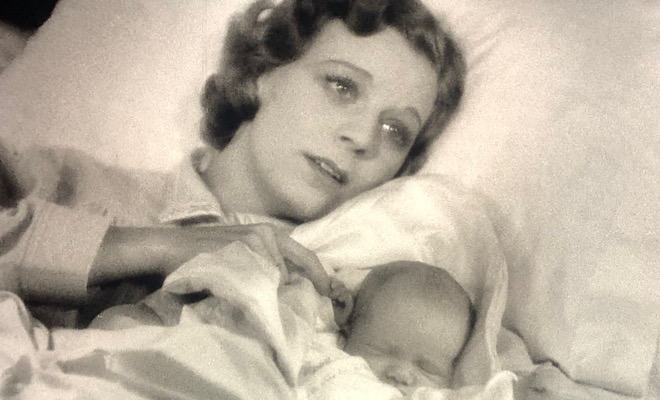 Vital Disc Stats: The Blu-ray
Little Man, What Now arrives on Blu-ray packaged in a standard case. Video codec is 1080p/AVC MPEG-4 and audio is DTS-HD Master Audio 2.0 mono. Once the disc is inserted into the player, the static menu with music immediately pops up; no previews or promos precede it.

A brand new 2K master yields a very pleasing 1080p/AVC MPEG-4 transfer that's distinguished by excellent clarity and contrast, good shadow delineation, and a palpable celluloid feel. Grain is a bit thick at times, but that's to be expected for a film of this vintage. Blacks are rich, whites remain stable throughout, and a lovely grayscale enhances detail and depth levels. The close-ups of Sullavan and Montgomery, which highlight their smooth skin and youthful glow, epitomize Borzage's intimate style, and though some print damage remains, the nicks, vertical lines, and a couple of stray threads at the edges of the frame only minimally distract from the on-screen action. Little Man, What Now may be 88 years old, but this high-quality transfer revitalizes the film without compromising its integrity. Sullavan fans will especially appreciate this stellar effort.

I found the DTS-HD Master Audio 2.0 mono track to be a bit problematic. Like many early 1930s films, Little Man, What Now is packed with competing audio elements - an omnipresent music score, atmospheric effects like the downpour that drenches the characters in the early part of the film, and the ongoing dialogue. Unfortunately, the primitive recording and mixing equipment used at the time couldn't properly modulate all the components, resulting in an often cacophonous track. I don't usually need to turn on the subtitles to understand the dialogue, but due to the soft-spoken nature of both Sullavan and Montgomery and enhanced fidelity of the music and effects, I found it necessary to do so to follow the plot. As the movie progressed, I discovered a lower volume level improved the listening experience somewhat, as well as using the display speaker instead of a home theater audio setup. Some age-related surface noise also intrudes from time to time, but the overall sound is bright throughout and distortion is absent.

In addition to a bunch of trailers for other Kino releases (sadly, the original preview for Little Man, What Now probably no longer exists), the only extra is a lively audio commentary featuring filmmaker Allan Arkush and film historian/filmmaker Daniel Kremer. The duo enjoys a relaxed rapport and speaks with great enthusiasm about the film. They discuss Borzage's reputation as a romantic, his trademark style and intimate shot compositions, and his abhorrence of authoritarian regimes. They also reveal how the film, which was produced by a Jewish man (Universal's Carl Laemmle, Jr.) got Hans Fallada, the author of the novel, into trouble with the German Gestapo during the early years of the Nazi regime. In addition, they chronicle the sad and difficult personal life of Sullavan, recount a bizarre episode involving Montgomery and a sabotaged car, and share details about the mysterious death of costume designer Vera West. Though both men occasionally veer off on tangents unrelated to Little Man, What Now, thankfully the digressions are brief and don't tarnish the overall track, which deserves a listen.

Little Man, What Now may not possess a gripping narrative, but its elegant presentation and fine performances make it worthy of a spin. Sullavan and Montgomery shine as the downtrodden couple trying to make ends meet and a brand new 2K master heightens the impact of Borzage's beautiful images. The antiquated audio is problematic, but not a deal-breaker, so if you're a Sullavan and/or Borzage fan or an admirer of rare Golden Age classics, you shouldn't hesitate to pick up the disc. Worth a Look.