Abbott and Costello in Jack and the Beanstalk - 70th Anniversary Edition

The first color and possibly most playfully entertaining film in their extensive catalog Abbott and Costello in Jack and the Beanstalk plants magical Blu-ray beans. Lovingly and carefully restored by the 3-D Archive team, the film has never looked better after decades of some genuinely terrible home video offerings. Complete with an excellent transfer, clean audio, and a host of fantastic bonus features, no Abbott and Costello collection is complete without it. Recommended.

“Music to my ears! My first victim!”

When Jack (Lou Costello) and Dinkle (Bud Abbott) answer the call to babysit the willful and precocious little Donald (David Stollery) so his sister (Shaye Cogan) and her beau (James Alexander) can go out. Caring for the child who refuses to go to bed, Jack picks up a copy of Jack and the Beanstalk and soon enough he finds himself whisked away into a colorful fantasy land! As the titular Jack, he’ll have to contend with magic beans, the proverbial golden goose, and the diabolical Giant (Buddy Baer)!

As the story goes, Lou Costello was reading the famed tale of Jack and the Beanstalk to his daughter one night and thought it’d make a great vehicle as an Abbott & Costello picture. 1952’s Abbott and Costello in Jack and the Beanstalk would become the comedy duo’s first color feature film. Similar to the iconic musical classic The Wizard of Oz, the film opens in sepia void of any nuanced color. As Lou has the little boy read him the story (because of all the big words), he drifts off to sleep and the film transitions to glorious full Cinecolor. While it may have been a problematic color process, the film is bright, beautiful, and a lovely adventure. The songs may not be as memorable as “Somewhere over the rainbow” as Lou doesn't exactly have the same vocal range as Judy Garland and the scale of production is certainly smaller, but it’s a colorful good bit of family fun.

Playful and silly from the start, Jack and the Beanstalk may well be the perfect movie to introduce young new fans to the comedy delights of Abbott and Costello. It’d been years since I last sat down to this film and for this outing I recruited my two-year-old son for the adventure. And while it wasn’t Spider-Man: Into the Spider-Verse or Bluey, he ended up enjoying it. The physicality that was a hallmark of Lou Costello’s comedy was a hit getting big laughs from my little guy. It took us a couple of runs to get through it but it was a good time. Now I can’t wait to roll Hold That Ghost with him! For myself, I’d forgotten how damn cute this film was. I’d seen it many times on tape and I think I rented the DVD a time or two, but I never owned it. I enjoyed it but never loved it. But with this viewing, it moved up in my eyes in large part to finally having a quality video presentation there are enough sight gags where any loss in clarity can actually rob the humor a bit. 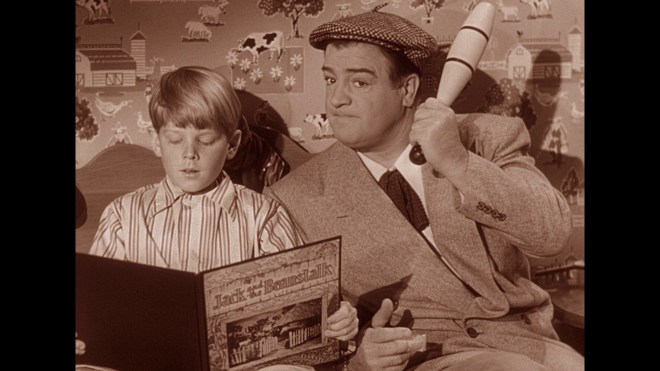 On the scale of their many films and television series, Jack and the Beanstalk may not be the best Abbott and Costello adventure but it proves to be a fun time. Bud and Lou are in perfect form with Bud always trying to con every cent out of hapless Lou - in "real life" and in the colorful story. The interplay of Buddy Baer (Max Baer’s younger brother) first as the towering police officer and then the big bad giant was a hoot. Lou playing a “young boy” was right in line with his innocent man-child character. If your past outings were on a shoddy VHS or any of those bargain bin crapper DVDs, it’s time to take another look at this silly little gem now that it can be fully appreciated.

Vital Disc Stats: The Blu-ray
Abbott and Costello in Jack and the Beanstalk plants some beans for a new single-disc Blu-ray thanks to Classic Flix and 3-D Film Archive. Pressed on a Region Free BD-50 disc, the disc is housed in a standard clear case. The disc loads to a preview for Classic Flix’s release of Marx Bros.’ classic Night in Casablanca before arriving at a static image main menu with standard navigation options. When pressing play, you have the option to hear a two-minute introduction from Lou Costello’s daughter Chris or just dive right into the movie itself. 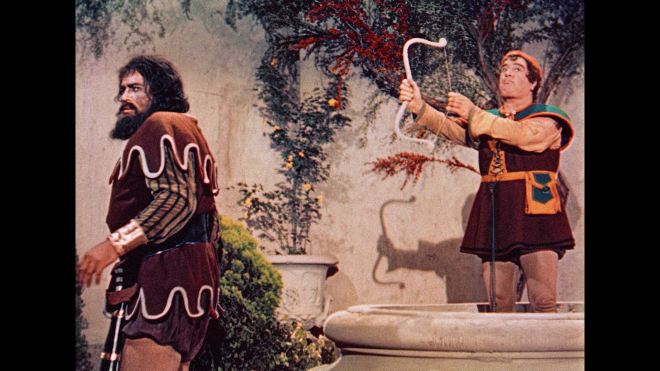 Where some films get lost to the winds of time or barely survive with a “as good as we can get” scenario, every so often we get true joys like Jack and the Beanstalk. After decades of relatively pisspoor home video releases, this film finally comes home with a wonderful fully restored Blu-ray to celebrate its 70th Anniversary. This had been previously released on Blu-ray 2008, 2015, and most recently in 2020, and suffice it to say they were pretty much disasters. Thanks to Bob Furmanek and his team of restoration artisans at 3-D Film Archive, we have a new master to celebrate. Now, given age and the film’s use of the somewhat troublesome Cinecolor process there are a few small quibbles but this is an overall beautiful release. There are a few little nicks and scratches present but they’re hardly distracting (a miracle in of itself considering the elements available). Then there’s the Cinecolor that can fluctuate a bit from shot to shot with flesh tones slipping a little orange or Lou Costellos’ green Jerkin slipping a little teal blue. But again, those are small complaints compared to how badly this film was treated previously. Film grain can be a bit heavy at times, but this release actually displays pleasing facial features and texture detail. Costumes, production design, and Baer’s Giant makeup get their time to shine. This outing honestly felt like I was seeing this film for the first time and I think being able to actually appreciate what was on screen helped me enjoy the film more than I ever had before. 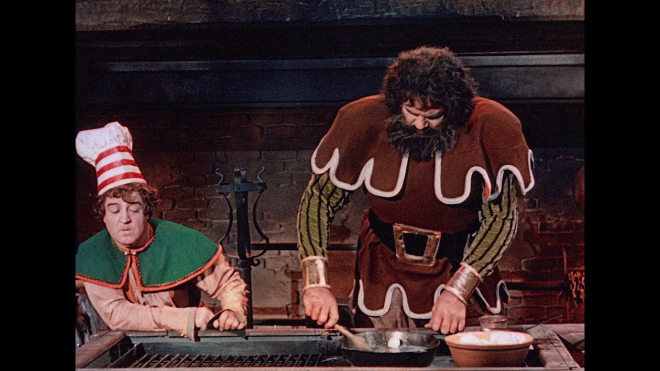 This release also comes packed with a solid DTS-HD MA 2.0 mono track. The mix can sound a little stiff in places without a lot happening in the soundscape, but that’s a small quibble. Hiss and any age issues are relatively minor. Dialog is clean and clear throughout without issue. The mix picks up the heat for the song and dance numbers wither stronger orchestral accompaniment, the last act of the film is particularly active and dynamic in that regard - complete with some humorous sound effects for the Giant chasing Jack. Like the video transfer, this mix is in remarkable shape. 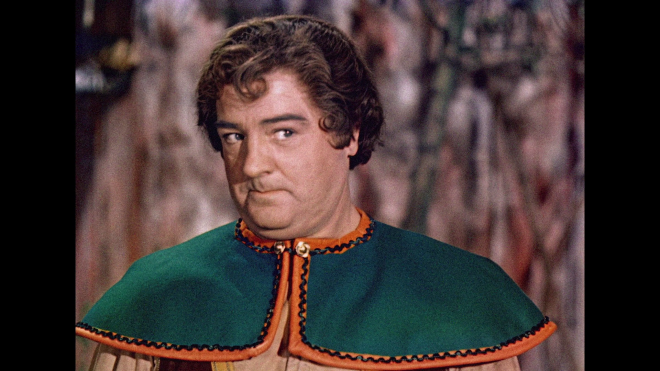 If restored A/V wasn’t enough - this disc comes packed with a bunch of interesting and informative bonus features. The TV and Radio sketches are certainly the most entertaining, but if you want to see what work goes into bringing these nearly lost gems back to life, check out the restoration demo. This film really came back from some dire straits and makes you appreciate the final product even more. 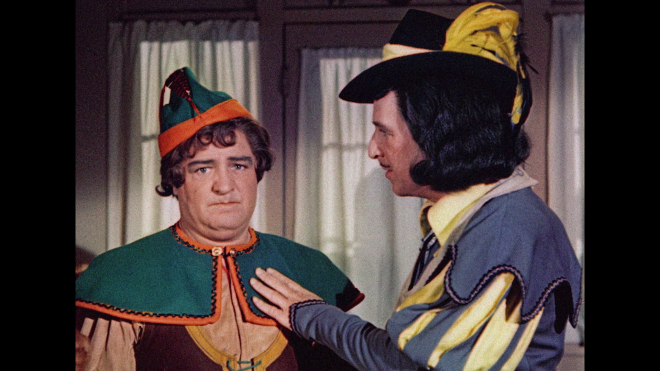 There’s good reason to revisit movies you may not have been taken with. Growing up my Abbott and Costello favorites were hits like Hold that Ghost and Meet Frankenstein. The more scared Lou got, the funnier the film was in my opinion. For a long time, Jack and the Beanstalk just wasn’t a favorite, but something clicked with this latest viewing. I still don’t think it’s their best work, but the whimsical take on the classic tale is delightful and Bud and Lou’s interplace is as sharp and hilarious as ever. Plus, I got to enjoy it with my kid!

After years of some pretty terrible home video releases, ClassicFlix and 3-D Film archive planted their own magic beans and sprouted one hell of a Blu-ray release. With a restored picture and audio, the film simply has never looked better on disc or any home video format. Roll in some interesting and entertaining bonus features and you have a great disc for your Abbott and Costello collection, Recommended