A bleak portrait of New York City's drug culture, Born to Win awkwardly mixes gritty drama with quirky comedy as it chronicles a group of misfits bound together by heroin. George Segal, Karen Black, Hector Elizondo, and a young Robert De Niro try their best, but the material isn't strong enough to maximize their talent. Fun City Editions with Vinegar Syndrome revives and restores director Ivan Passer's long-neglected film, but the results aren't ideal. Grainy video and audio that needs a dialogue boost somewhat inhibit the enjoyment of this early 1970s curio that's a mixed bag, but still absolutely Worth a Look.

The wave of great, gritty films that exposed New York City's underbelly in the late 1960s and early 1970s - Midnight Cowboy, Klute, The Panic in Needle Park, Mean Streets - infused contemporary cinema with a raw, kinetic energy, but it washed Born to Win aside. And it's easy to see why. An oddball mix of black comedy and devastating drama, director Ivan Passer's rough, uncompromising look at the Big Apple's seedy drug culture and the lost souls beholden to heroin's numbing allure can't make up its mind what it wants to be or how it wants to tell its downbeat story. A strong cast of rising stars attacks the material with gusto, but their yeoman efforts aren't enough to make Born to Win a winner.

J (George Segal) is a former hairdresser who hits the skids after his drug addiction busts up his marriage to Veronica (Paula Prentiss). He now lives a nomadic existence, hanging around Times Square in search of his next fix and beholden to his sadistic, manipulative dealer, Vivian (Hector Elizondo), who sends J on periodic "errands" that pay just enough cash to support his habit. Amid the track marks on his forearm lies a tattoo that says "Born to Win," but if anyone is a loser, it's J.

A chance encounter with Parm (Karen Black), a free-wheeling woman who can't resist J's charm, leads to a relationship that just might beat the odds, but will the two misfits be able to turn J's horrible luck around? Or will J's drug dependence, poor decisions, and the pressure of two narcs (Robert De Niro and Ed Madsen) desperate to nab Vivian ruin their chance for happiness? 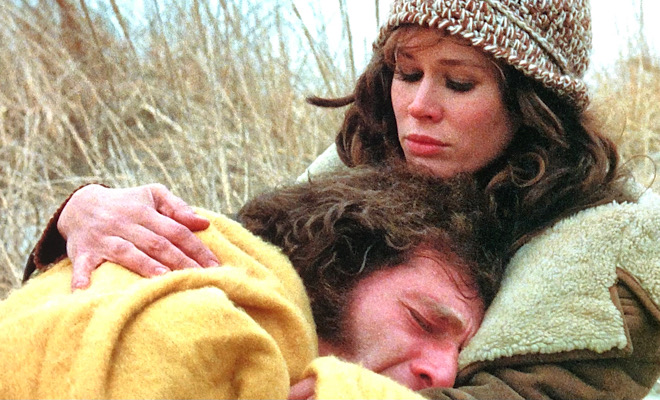 Location shooting, the use of non-actors, and a semi-documentary style lend Born to Win an authentic urban vibe. Passer, whose best-known movie is probably Cutter's Way, uses subjective shots and handheld cameras to immerse us in New York's grime. He films in dingy bars, cheap diners, sterile office buildings, and on garbage-strewn streets, yet all that terrific atmosphere can't prop up a weak, aimless narrative that runs all over the map but never gets anywhere. Like the characters, we're on a treadmill, and though several comic episodes lighten the heavy load and make J more endearing, they don't mesh well with all the realism.

Scraping Bottom was the film's original title and it certainly paints a more accurate portrait of J and his pathetic existence. (It also was the title of the off-off-off-Broadway play upon which the movie is based.) Born to Win puts a more positive spin on the tale and was undoubtedly thought to be more marketable. Though its irony eventually hits home, it misleads the audience. This is anything but a feel-good film. 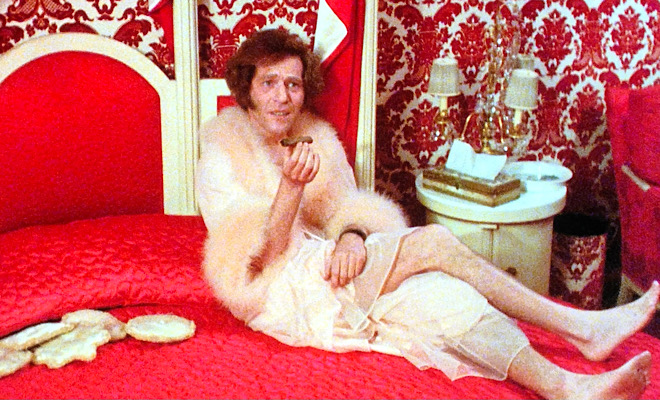 Because we know Segal so well from his subsequent romcoms and sitcoms, it's difficult to accept him as a drug addict, but he attacks the part with vigor and his natural comic flair works to his advantage. He and Black, who steals every scene in which she appears, craft a believable relationship out of thin air, and their energy helps fuel the inert plot. Though Prentiss receives above-the-title billing, her total screen time amounts to less than five minutes and consists mainly of looking ornamental, concerned, and stoned.

Elizondo plays the sadistic drug dealer with relish, and it's a kick to see the young De Niro in a small part as a seemingly upstanding cop who's willing to get his hands dirty if it serves his purpose. Two years later, De Niro would make his big splash in Mean Streets, and a year after that, he'd win his first Oscar for The Godfather, Part II. His unassuming work here hardly telegraphs his future success, but you gotta start somewhere. Burt Young of Rocky fame also briefly appears as a thug, but doesn't utter a word.

Like its hero, Born to Win struggles to gain favor, beat the odds, and hit the big time, but consistently falls short. It's still an interesting curio that flaunts a distinct style and features good performances, but unless you're a diehard fan of early '70s cinema, it might not give you the high you expect. 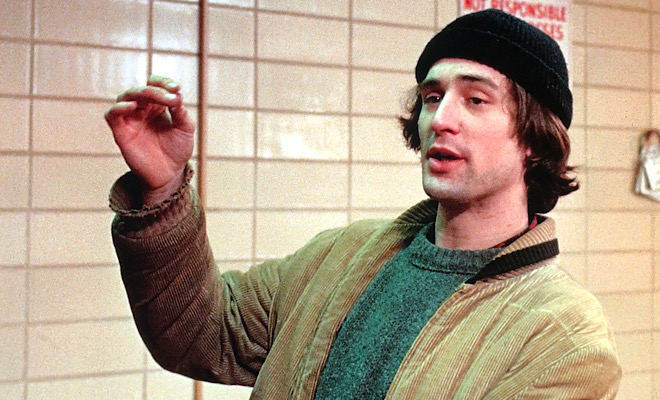 Vital Disc Stats: The Blu-ray
Born to Win arrives on Blu-ray packaged in a standard clear case. If you order through Vinegar Syndrome you get a limited release slipcover. A 12-page booklet that contains an essay by film archivist Justin LaLiberty and several photos is tucked inside the front cover. Video codec is 1080p/AVC MPEG-4 and audio is LPCM mono. Once the disc is inserted into the player, the full-motion menu with music immediately pops up; no previews or promos precede it.

According to the packaging, a "new 2K restoration from its 35mm interpositive" forms the basis for Born to Win's 1080p/AVC MPEG-4 transfer, but even a fair amount of TLC can't work miracles on a film that's spent far too long in the public domain. Heavy grain is the primary offender, and while it lends this urban movie an appropriately rough, gritty feel, it often diffuses the picture's underlying clarity. Some print damage is evident as well - faint scratches, a few blotches, and various nicks and marks - but colors are surprisingly lush and vibrant. Reds predominate - a red apartment door, red furniture, George Segal's red tie, and most impressive of all, a garish red bedroom - but yellows and greens make statements as well.

Good contrast adds some depth, dense blacks supply weight, flesh tones appear natural and stable throughout, and though some crush creeps in here and there, shadow delineation is fine. The thick grain slightly dulls the impact of close-ups, but they still nicely highlight the mens' facial hair and stubble, Karen Black's tears, and the allure of Paula Prentiss. The transfer also beautifully renders the grimy New York City locations both during the day and at night.

The low budget nature of Born to Win and the shoddy treatment it received after its release have surely tainted the film, but Vinegar Syndrome has done the best it could with what it had to work with. Though the transfer is far from perfect, fans of the movie should be pleased Born to Win has at last been remastered and given a quality Blu-ray release.

The LPCM 2.0 mono track handles the music and effects with aplomb, but drops the ball a bit with the dialogue.  Several lines sound muffled or simply require better prioritization to make them easier to comprehend. On the plus side, a wide dynamic scale embraces all the highs and lows of William Fischer's edgy music score and the high-energy soul of the song "Ooh Poo Pah Doo," performed by Ike and Tina Turner. Sonic accents like screechy car wheels, revving engines, gunfire, and fisticuffs are distinct, subtle atmospherics like urban street noise and crashing waves at the seashore come through cleanly. Distortion is absent and no age-related hiss, pops, or crackle intrude. It's just a shame the dialogue issues hamper an otherwise solid and effective track.

A few extras enhance the disc.

An uneven mix of black comedy and serious drama, Born to Win never quite gels, despite strong performances from George Segal, Karen Black, Hector Elizondo, and a young Robert De Niro. Director Ivan Passer's film paints a bleak portrait of the New York City drug culture in the early 1970s, but the thin plot rarely gives the interesting characters much to do. Vinegar Syndrome's Blu-ray presentation features a restored yet very grainy transfer, solid audio that could use a bit of a dialogue boost, and a lively commentary track. If you're a fan of '70s cinema, this curio might be up your alley and worth a look.