The remake may not top other versions, but there's plenty to love about the 1941 adaptation of Dr. Jekyll and Mr. Hyde. Robert Louis Stevenson's chilling novella gets the glossy MGM treatment, but Victor Fleming's atmospheric direction and Spencer Tracy's full-throttle portrayal of the upstanding, mild-mannered doctor and his depraved, lascivious alter ego keep this slick adaptation humming. An arresting transfer struck from a 4K scan of the best surviving preservation elements and robust audio add more luster to this thrilling and disturbing study of schizophrenia. Recommended.

Only a decade after Paramount Pictures produced the first talking screen adaptation of Dr. Jekyll and Mr. Hyde (which won Fredric March a well-deserved Best Actor Oscar), MGM took a crack at the creepy story and cast two-time Academy Award winner Spencer Tracy in the titular roles. Tracy attacks the parts with his customary vigor, but like most remakes, the 1941 version of Robert Louis Stevenson's classic study of sexual repression and split personality pales when compared to its 1931 counterpart, despite the similarities that inexorably link the two films.

In 1887, the year of Queen Victoria's Golden Jubilee, an austere bishop (C. Aubrey Smith) lauds England's evolution from a country that once was "mired in the ways of the flesh" to one that now embraces "virtue and moral blessing." While Dr. Henry Jekyll champions the pursuit of an upstanding, pious life, he accepts human frailties and believes the rigidity of a puritanical society puts undue strain on the psyche. The conflict between good and evil fascinates him, and through a series of lab experiments, he develops a serum that he hopes will help people control their nefarious impulses. Jekyll tests the drug, which is supposed to separate the evil from good in both the brain and soul, on himself and it instantly transforms him into a glowering, manipulative, and violent creature who's a slave to his base desires. He names this alter ego Mr. Hyde, and though Jekyll can manage the two polar personalities at first, Hyde soon starts surfacing against his will, causing Jekyll to lose his grip.

Jekyll loves the winsome, virginal Beatrix (Lana Turner), but her prudish, judgmental, and domineering father (Donald Crisp) disapproves of Jekyll's liberal views and unorthodox work and tries to keep the two apart. The separation exacerbates Jekyll's frustrated libido, which in turn spurs Hyde's emergence and pursuit of Ivy Peterson (Ingrid Bergman), a bawdy barmaid who stokes his passions. Hyde terrorizes Ivy with his lust and obsession, but try as she might, she can't escape his grasp, and as the tensions between them mount, Hyde becomes more unhinged. 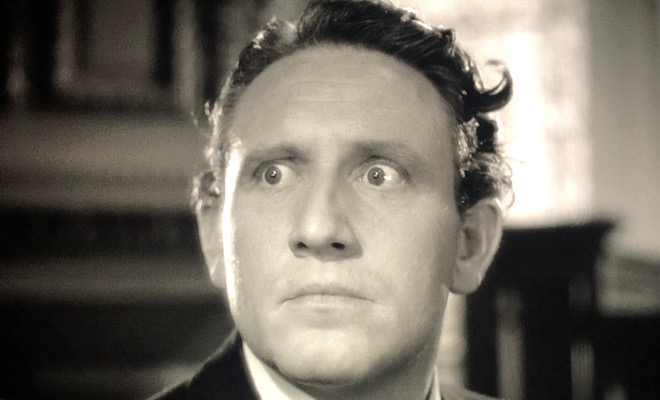 Directed by Victor Fleming, this version of Dr. Jekyll and Mr. Hyde closely follows the 1931 film (though it runs about 15 minutes longer), but both owe more to an 1887 stage adaptation than Stevenson's novella. The added length somewhat hampers the 1941 production, which drags in spots, and the fancy MGM trimmings, as well as the stringent rules imposed by the Hays Office, soften the tale's inherent grit. The 1931 version was a pre-Code film, so enjoyed more leeway in its depiction of sex, violence, and immoral characters. Fleming's version must pussyfoot around such issues, relying on innuendo and subtext to convey its dark themes. Ivy is supposed to be a prostitute, but here she's painted merely as a loose, impoverished, somewhat disreputable woman, making the contrast between her and Beatrix not as stark as it otherwise might be. Some suggestive, Freudian dream sequences supply titillation, but their choppy editing hints at some mandated cuts that might have excised more overt sexual imagery.

Dr. Jekyll and Mr. Hyde marked Fleming's first film since the knockout one-two punch of The Wizard of Oz and Gone with the Wind two years before, and while this thriller boasts some showy moments, a few eerie visual effects, and plenty of period flavor, Fleming employs lots of close-ups to craft an intimate, claustrophobic mood. Artistry was never Fleming's strong suit, but he's a great storyteller and his movies nicely balance character and plot. He and Tracy would make a total of five pictures together, the most noteworthy of which was their first, an adaptation of Rudyard Kipling's Captains Courageous that won Tracy his first Best Actor Oscar in 1937. 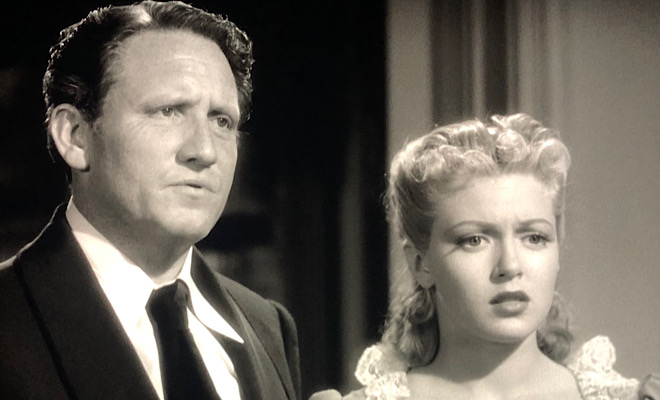 At age 41, Tracy doesn't cut quite as dashing a figure as the 34-year-old March did in 1931, but his plainer looks and doughier physique make his lascivious desires feel more twisted. Tracy deftly contrasts the two roles without overplaying, and the more subdued Hyde makeup downplays the monster aspect of the character and emphasizes the film's more cerebral approach to the material. Jekyll and Hyde will never eclipse any number of memorable Tracy portrayals, but he does the men justice and maintains his dignity even during the movie's most outrageous moments.

Interestingly, Bergman was originally cast as Beatrix, and Turner was slated to play Ivy, but Bergman, who had only made three previous Hollywood films, feared another good-girl part would lead to typecasting, so she lobbied Fleming to switch the parts. Turner, who doubted her ability to scale the dramatic heights the role of Ivy requires, welcomed the change, but still struggled to muster the tears for her big scene at the end of the film, much to the frustration of Fleming, who reportedly employed some abusive tactics to wring them from her. Bergman had no such trouble with her role's emotional rigors, but her Cockney accent is downright awful and detracts from an otherwise strong performance. 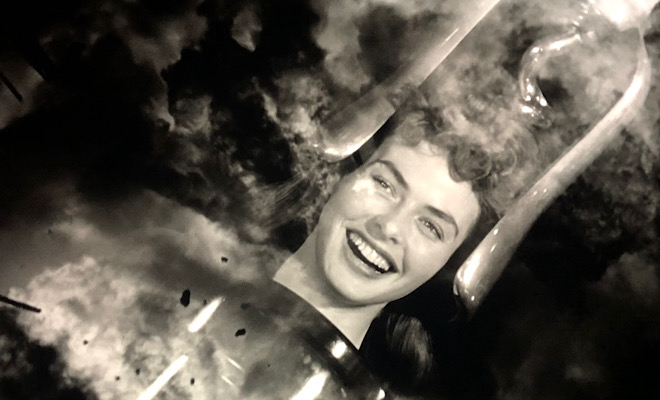 1941 would prove to be a big year for the 20-year-old Turner, as she catapulted to stardom on the strength of her fine work in Ziegfeld Girl, Dr. Jekyll and Mr. Hyde, and the western comedy Honky Tonk with Clark Gable, with whom she would make three other films. Turner and Tracy enjoy a comfortable chemistry, but the 20-year age difference seems more pronounced than when she shares the screen with Gable, who was born just 10 months after Tracy. Although Turner's talent is still developing, she holds her own with Tracy and Bergman and adds welcome luster to a gloomy movie.

Crisp, who would win the Best Supporting Actor Oscar the same year for playing a much more sympathetic father in How Green Was My Valley, perfectly embodies the priggish attitudes that pervaded the Victorian Era, and such reliable character actors as Ian Hunter, Barton MacLane, C. Aubrey Smith, and Sara Allgood, who ironically would portray Crisp's wife in How Green Was My Valley later that year, all contribute top-notch support.

Though it won't ever rank as the finest adaptation of Stevenson's enduring horror classic, this version of Dr. Jekyll and Mr. Hyde stands as a polished, literate, well-acted production that incisively explores the story's provocative themes. Horror fans might find it a bit too cerebral, but Fleming's film still delivers the requisite thrills and contains one of Tracy's boldest portrayals. 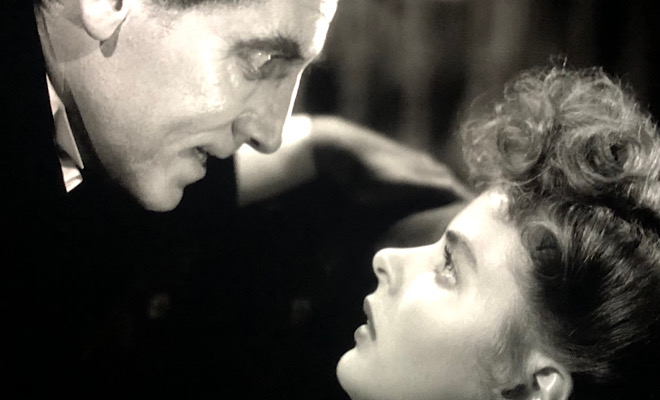 Vital Disc Stats: The Blu-ray
The 1941 version of Dr. Jekyll and Mr. Hyde arrives on Blu-ray packaged in a standard case. Video codec is 1080p/AVC MPEG-4 and audio is DTS-HD Master Audio 2.0 mono. Once the disc is inserted into the player, the static menu without music immediately pops up; no previews or promos precede it.

A new HD master culled from a 4K scan of the best surviving preservation elements yields a gorgeous 1080p/AVC MPEG-4 transfer that both faithfully honors Joseph Ruttenberg's Oscar-nominated cinematography and heightens the intensity of this classic chiller. Deep blacks, bright whites, and wonderfully varied grays create a well-balanced picture that boasts excellent contrast and clarity and brims with depth. (The backdrops and miniatures might be more noticeable, but that's a small price to pay for such a stunningly crafted presentation.) Beautifully resolved grain maintains the feel of film while lending the image a lovely sheen, and the process shots that comprise the bizarre and suggestive dream sequences are crisp and seamless. Stellar shadow delineation keeps crush at bay and razor-sharp close-ups allow us to drink in all the details of Tracy's ghoulish Mr. Hyde makeup, as well as the creamy, often tear-stained complexions of Bergman and Turner. Costume textures, the decor of the Victorian interiors, and the equipment details in Dr. Jekyll's laboratory are distinct, and no nicks, marks, or scratches mar the pristine source material. Once again, Warner Archive hits another classic transfer out of the park and makes an 80-year-old feature look brand new.

The DTS-HD Master Audio 2.0 mono track supplies clear, well-modulated sound. A wide dynamic scale embraces all the highs and lows of Franz Waxman's lush, Oscar-nominated score without a hint of distortion, and all the dialogue is easy to comprehend. Sonic accents like piercing screams, gunshots, and shattering glass are crisp, and any age-related surface noise has been meticulously erased.

The only extra is the four-minute original theatrical trailer, which shrouds the appearance of Mr. Hyde and boldly proclaims "your eyes have never seen entertainment so graphically filmed." The preview is presented in high definition.

A respectable remake of the 1931 classic, the 1941 version of Dr. Jekyll and Mr. Hyde slathers some MGM gloss onto Robert Louis Stevenson's immortal horror tale and runs a few minutes too long, but Victor Fleming's assured direction and top-notch performances from Spencer Tracy, Ingrid Bergman, and Lana Turner keep us involved in this fascinating and disturbing study of one man's tortured psyche. A gorgeous new transfer struck from a 4K scan of the best surviving preservation elements and solid audio enhance the creepy mood and distinguish Warner Archive's Blu-ray presentation of this atmospheric chiller. Recommended.