'Cheap Thrills' follows Craig (Pat Healy), a struggling family man who loses his low-wage job and is threatened with eviction. In an effort to delay facing the music at home, he heads to a local bar and encounters an old friend (Ethan Embry). The two friends are roped into a round of drinks by a charismatic and obscenely wealthy stranger (David Koechner) along with his mysterious wife (Sara Paxton). The couple engages the two friends in a series of innocent dares in exchange for money over the course of the evening, with each challenge upping the ante in both reward and boundaries. It seems like easy and much needed money, but the couple's twisted sense of humor pushes just how far Craig and his friend are willing to go for money and cheap thrills.

'Cheap Thrills' is a fantastically perverse, sickening, yet entertaining black comedy-cum-thriller that offers a bleak examination of the appeal of instant wealth and, more to the point, the enormous and widening disparity between the haves and the have-nots that is played out here in wicked, blunt, often brutal fashion.

As the first feature-length film by director E.L. Katz, and starring Pat Healy ('Compliance'), Ethan Embry, Sara Paxton ('The Innkeepers'), and David Koechner, the movie concerns Craig (Healy) an extremely down-on-his-luck family man, living in the financially difficult world of the present-day United States. In the course of a single day, Craig is served an eviction notice and winds up losing his job as a mechanic. Ashamed to go home to his child and equally unemployed wife, Craig heads out to a local dive bar, where he runs into his semi-estranged deadbeat friend Vince (Embry). Not long after the pair embark on some stilted carousing, they are pulled into the orbit of Violet (Paxton) and Colin (Koechner), an unlikely couple looking to celebrate Violet's birthday by making it as memorable and entertaining as possible. And as Craig and Vince soon find out, money is certainly no object.

The screenplay by Trent Haaga and David Chirchirillo zeroes in on the importance of money and the commodification of people in subtle ways early on, setting the stage for when the film rapidly tilts to the extreme. That, in turn, allows the overwhelming and somewhat unnerving sense of coincidence to feel like the first exploratory tendril of the nightmare that Craig and Vince will eventually find themselves acting in as willing participants. Koechner plays Colin as an enigmatic and archetypal trickster, or the physical embodiment of the id, gleefully, but evenly goading his cash-strapped contestants into increasingly dehumanizing acts, after tempting them with cash for simple feats like drinking a shot of tequila, or getting a woman at the bar to slap them across the face. The requests and the dollar amounts soon escalate, creating a series of encounters that include wanton violence, drug use, and sex that all probe the limits of Craig's integrity and demonstrates the mind-altering allure of money, especially to the truly despondent. 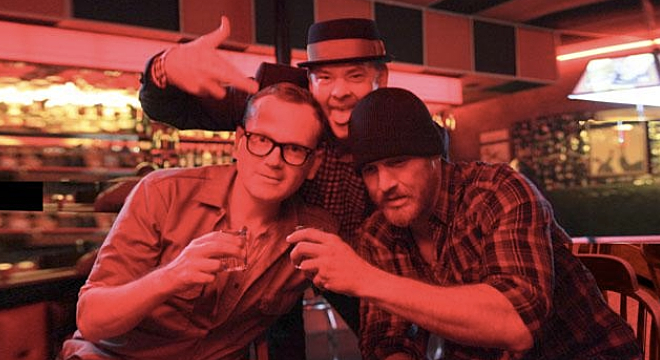 And yet the most sickening thing about the film isn't the progressively more debasing deeds that Craig and Vince are dared into performing or even the manner in which Colin and Violet look upon the events with cold, detached amusement. It is the idea that, as mentioned above, the participants are willing, and worse yet, they're driven not entirely by greed, but by a pervasive, almost hopeless sense of need. This isn't some twisted morality play like 'Saw,' wherein a maniacal character is looking to generate some kind of principled equilibrium; this is raw desperation, pure and simple. And despite the escalating violence, and increasingly disturbing tasks Craig and Vince find themselves engaging (competing) in, there is such a persistent sense of sadness and need surrounding the events, the intensification of the scenes is as heartbreaking as it is maddening, or, in one instance, stomach churning.

But 'Cheap Thrills' is more than an exercise in disturbing, 'Jackass'-style one-upmanship, and thankfully, the film is interested in illustrating the events of the narrative as something more than a series of mini-climaxes intended to enhance the will-they-or-won't-they question surrounding next dare. A great deal of this comes from the tenuous relationship between Craig and Vince, which carries mild echoes of mutual envy that mirrors the covetous resentment and desire both men feel toward Colin and Violet. That kind of depth creates two surprisingly rounded characters and helps the audience to understand why they are unable to pass up a chance at more money, despite the physical and psychological (perhaps even spiritual) cost to both. Moreover, there is a fascinating sense that Craig's primary drive comes from an underlying fear of emasculation, one that kept him from returning home, and makes him easily susceptible to Vince's pointed jabs once the stakes become even greater.

If there is a drawback, it's that Paxton's character feels too distanced from feeling anything, and is deliberately drawn as a sociopath with an unchanging facial expression, who is used as little more than a component in a sexually charged dare intended to test Craig's willingness to bet fidelity against paying the rent. While the scene does paint Violet as the aggressor, and as much an agent of choice as her husband, the moment teeters on being so obvious, it fails to color the character in a truly compelling way.

Still, despite its relatively simple concept, and sometimes heavy reliance on coincidence, 'Cheap Thrills' avoids being a one-note descent into depravity by telling a limited, but engaging story that attempts (and mostly succeeds) in deepening its characters amongst the insanity of their situation. It is a dark, bleak effort that paints an equally dreary picture of the widening gap between those who have and control money and the dehumanizing things others are willing to do in order to obtain a small fraction of it. 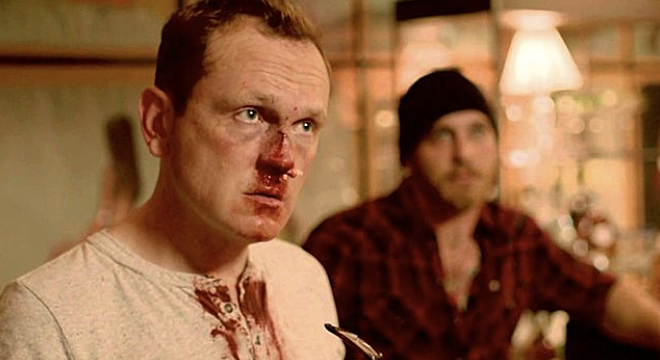 'Cheap Thrills' comes from Drafthouse Films as a single 50GB Blu-ray disc + Digital Download. The disc comes in a clear keepcase with a reversible insert, one depicting the film's theatrical poster, and the other a cartoonish drawing summarizing a key moment in the film quite well. There is also 16-page booklet that includes some stories from filming as well as examples of the film's marketing.

Shot on what is likely a very low budget, 'Cheap Thrills' looks surprisingly good, in this relatively grain-free, colorful image that plays up its nighttime environment quite well with strong contrast. The image is strong throughout, displaying plenty of fine detail that gets stronger in close-ups but manages to offer a good amount of facial features, textures, and background detail in wider shots. The film is deliberately shot with a rather shallow depth of field that helps fuel the claustrophobic sense of impending doom swirling around Craig, and the image makes nice use of this technique. Despite the vast majority of the narrative that is taking place at night, the image is filled with bright, vivid colors – especially red – that stand in stark contrast to the black surroundings.

Speaking of contrast, the high levels seen here produce rich, full-bodied blacks that deliberately swallow the world outside Colin and Violet's house, adding to the sense of claustrophobia and domination. There is no crush evident in the image or any issues with banding that might otherwise mar a nice looking picture. In fact, the only drawback is that the fine detail can sometimes be a little uneven, or look as though it has been diffused somewhat. This doesn't necessarily detract from the final product so much as reveal the film's indie beginnings.

The DTS-HD Master Audio 5.1 mix sounds great throughout. The mix is primarily focused on delivering strong, clear dialogue and it succeeds here on all accounts. Voices are easily heard amongst the din of background music or the odd sound effect. Most of the film takes place in a single residence, however, so the atmospheric elements are mostly on display early on. In these instances, the mix offers nice immersion that highlights working in a busy mechanic's garage, a dingy bar, and finally a strip club. When those elements give way to the relative quiet of the last location in the film, it actually works to enhance the feeling of isolation. In effect, the lack of atmosphere creates atmosphere. It's an interesting way to create a palpable feeling from the notion that something is missing.

Overall, the mix here works hard to demonstrate as many facets as possible early on, so that the rest of the film can just focus on the dialogue. Everything sounds very nice, and the clever use of the absence of sound really works to the mix's advantage

Audio Commentary with Director E.L. Katz and star Pat Healy – Katz and Healy give an informative and often entertaining commentary to the film that really looks at how it was made and what they were trying to get out of the screenplay.

Vital Heat: The Making of Cheap Thrills (HD, 40 min.) – An incredibly in-depth documentary that follows the film from pre-production, to shooting, to its premiere. It also features some interesting interviews with the cast, though it primarily focuses on Katz and the screenwriters.

Cheap Thrills at Fantastic Fest 2013 (HD, 6 min.) – While presenting the screening of Cheap Thrills' at fantastic Fest the cast and director engage in a series of cheap thrills with the audience.

'Cheap Thrills' takes a simple concept and turns it into an interesting and twisted commentary on the deplorable state many people find themselves in financially. The surface-level subtext is handled nicely, without being overbearing or too obtrusive. While the movie delves into disgusting territory, it does so with the intent of achieving something more than simply being distasteful. With nice image, great audio, some really nice extras, this comes recommended.

Sale Price 8.99
Buy Now
3rd Party 4
In Stock.
See what people are saying about this story or others
See Comments in Forum
Previous Next
Pre-Orders
Tomorrow's latest releases