The Best of Bogart Collection

For the Humphrey Bogart lover, 'The Best of Bogart Collection' is the stuff that dreams are made of – assuming, of course, that you don't already own one or more of the collected movies, as these four Blu-rays are identical to the movie discs of their separate individual releases.

This set brings together four of Humphrey Bogart's (and three of director John Huston's) greatest films: 'The Maltese Falcon', 'Casablanca', 'The Treasure of the Sierra Madre', and 'The African Queen'. Not only do they represent Bogart's best work, but each and every one of them are '5-star' films that easily fall onto almost any list of the greatest movies of all time.

"If you actually were as innocent as you pretend to be, we'd never get anywhere."

As a Bogart lover, I often go back and forth between 'The Maltese Falcon' and 'Casablanca' as to which film of his I love the most. While, all things considered, 'Casablanca' probably has the more engaging story, I just love the dialogue in 'The Maltese Falcon', as well as the complexity of its plot. Could a movie with so many twists and turns be made today? Probably not. Hollywood would feel the need to 'dumb it down' for the audience. Thankfully, the movie was made back in the day where much of a story had to be told via dialogue (thanks to the limitations of both budget and filmmaking itself), and here's an example of it working at its best – there's tons of stuff going on in the movie, but we learn of almost all of it through conversations between the characters.

'The Maltese Falcon' is credited by many as the first 'film noir' movie, which would launch a whole generation of films (several of which Bogart would star in) of private detectives (or similar professions) in shady surroundings involved in a sinister plot. Even considering all the movies of the genre that would follow, you still won't find a better flick than this.

(For a more detailed look at this movie, read our complete review of The Maltese Falcon.)

"I stick my neck out for nobody."

If you ask someone to name their favorite movie, you'll probably get a wealth of different replies. However, if you ask someone to name their ten favorite movies, 'Casablanca' is going to be mentioned more times than not. It's a remarkably entertaining film that has a timeless quality to it that hasn't made it seem antiquated over the years. It also helps that it has an ending that is quite open-ended for a movie of its (or, honestly, any other) era. We are left without any firm resolution of the fates of the primary characters.

Once again, Bogart plays a character with some moral ambiguity. At least that's what we think at first. What sets Rick Blaine apart from Bogie's other leading men is that, in the end, Rick is perhaps more moral and selfless than any other character Bogart ever portrayed on screen. That's just one of the many reasons why 'Casablanca' is instantly associated with the actor and vice versa. It's debatable whether Rick Blaine was Bogart's best performance, but it's hard to argue that 'Casablanca' is his best film.

(For a more detailed look at this movie, read our complete review of Casablanca.)

"Nobody puts one over on Fred C. Dobbs."

Of all of Humphrey Bogart's leading men, perhaps none are more downright evil than the one he plays in 'The Treasure of the Sierra Madre'. He's blinded by his obsession for gold, and will stop at nothing to achieve his goals. That, of course, leads to one of Bogart's most interesting performances of his career, as it's still hard as a viewer not to connect with Dobbs, although that connection has more to do with the actor playing him than the character himself.

'The Treasure of the Sierra Madre' came at a time in Bogart's career where he started to make some more interesting choices with his lead characters. No doubt tired of playing the leading man hero, Fred C. Dobbs gave Bogart the chance to explore other areas and ranges of his talent, and he's fun to watch here, even if Dobbs is far from likeable.

(For a more detailed look at this movie, read our complete review of The Treasure of the Sierra Madre.)

With all his impressive performances in great films, Humphrey Bogart only won one Academy Award in his career, and it was for 'The African Queen'. At first glance, there's nothing particularly complex about the film's plot. In fact, the movie consists of little more than a missionary (Katharine Hepburn) and an aging riverboat captain (Bogart) sailing down an African river during World War I, and is almost simplistic when compared to the complex storylines of many of Bogie's other films. However, it's the performances here – and particularly the onscreen chemistry between the two leads – that makes 'The African Queen' worth watching.

While it's not Bogart's best performance, it's hard to argue his Best Actor win -- if only as a nod toward all those great roles he had before 'The African Queen' that he never got recognition for.

(For a more detailed look at this movie, read our complete review of The African Queen.)

I'm a huge Bogart fan. For my money, he's one of the few 'classic' actors whose work translates almost seamlessly to a modern audience. You can watch a movie he starred in during the 1940s and his naturalistic style of acting will make you think it was shot only a few years back. His 'everyman' quality is probably a huge reason why he remains as popular today as he was during his career. This Warners release is a great 'starter' kit for those not familiar with Bogart's work, and a great collector's set for those of us who have admired him throughout the years.

'The Best of the Bogart Collection' arrives on Blu-ray in a standard size Elite keepcase, with hubs on the inside left and right capable of holding two Blu-ray discs (one right over the top of the other). 'The Maltese Falcon' is packaged overtop 'Casablanca' on the inside left, while 'The Treasure of the Sierra Madre' sits atop 'The African Queen' on the inside right. The keepcase slides inside an attractive heavy cardboard holder with front artwork that matches the front artwork of the keepcase slick. Also inside the holder is an envelope which contains four mini-poster productions of the four films contained in this set. They measure almost exactly the same size as the Blu-ray keepcase in height and width. Not much in terms of an exclusive, but still a nice addition. The quality of the paper these are printed on is less than sturdy (thin and non-glossy), so buyers will want to be careful not to accidently rip or bend them when taking them in and out of the envelope/packaging. None of the four Blu-rays is front-loaded with any trailers or promotions. 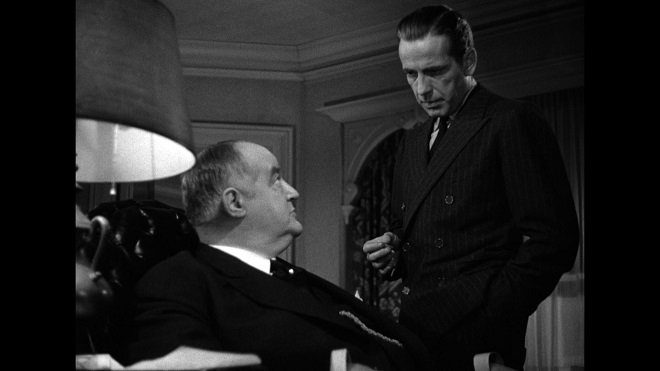 There's little doubt that the best looking of the four titles in this release is 'Casablanca', as it went through a brand-new 4k remastering for its 70th anniversary release in 2012 (despite having gone through a pretty extensive and quality remaster in 2003). It's hard to think the movie could look much better than its current rendering, with deep black levels, a wonderful level of clarity and detail, and a fine layer of grain that maintains the look of film in the digital format.

'The African Queen' is the second-best looking film on this set, as it was also treated to a 4k remaster back in 2010. It's also the only color film here, and provides a rich and warm-looking picture whose only real fault is that it's almost too detailed – making many of the movie's process shots more obvious than they've been in any prior release.

Both 'The Maltese Falcon' and 'The Treasure of the Sierra Madre' transfers come from earlier 2k restorations of the movies, and while neither may look as pristine as the other two films in this set, they still look remarkably great. 'The Maltese Falcon' is the oldest movie in this set, and its age shows as there's still a hint here and there of defects in the print, including some missing frames (you'll see the characters abruptly 'jump' for a second) in the final sequence of the movie. 'The Treasure of the Sierra Madre' fares much better, with a print of the film that's still in excellent shape, with nicely deep black levels and details.

However, any complaints about any of the above films are really just splitting hairs. These four movies look fantastic in HD considering their age, and their video quality ranks among the best you'll find on Blu-ray for movies from this era.

Please refer to HDD's original reviews (linked to in "The Movie Itself" section above) to find more detailed video reviews of these four movies. 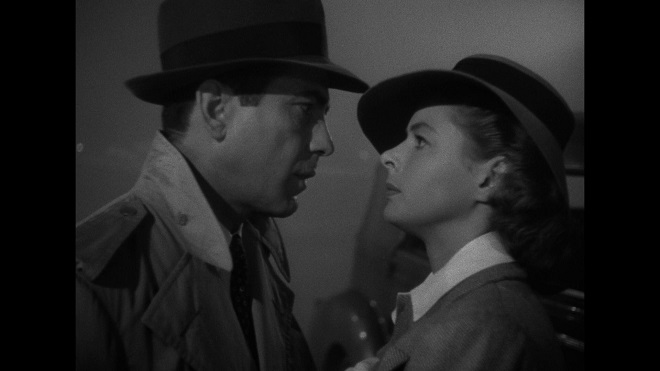 You'll find no attempt to provide new stereo tracks for any of the movies on this set. They've all been remastered in DTS-HD Master Audio lossless mono, and they all pretty much sound wonderful. There's a slight hiss to 'The Maltese Falcon' that sharp ears might be able to pick up on, making it the weakest of the four film's tracks. 'Casablanca', on the other hand, sounds great for a movie released just one year after 'The Maltese Falcon', with no evidence of hissing, popping, or other audio glitches to be found.

Both 'The Treasure of the Sierra Madre' and 'The African Queen' come across as crisp and clear for their ages, with no real noticeable issues of hissing, popping, dropouts, or other problems that are frequently associated with HD releases of older films. Considering its setting, 'The African Queen' does a pretty good job of capturing all the sounds of its environment (yes, much of the movie was actually shot in Africa), despite the limitations of a mono track.

Please refer to HDD's original reviews (linked to in "The Movie Itself" section above) to find more detailed audio reviews of these four movies. 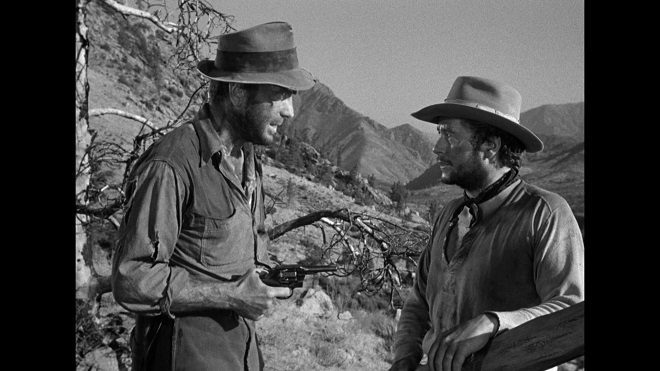 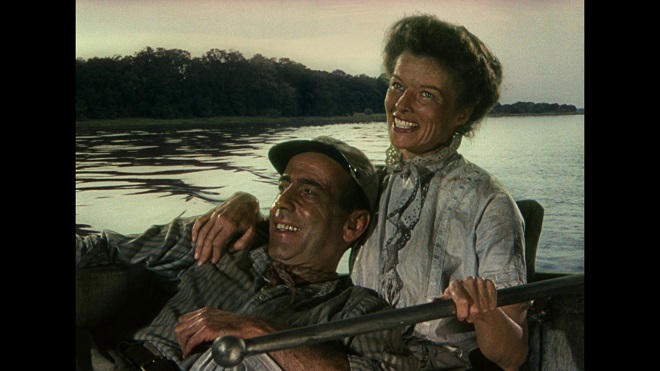 You'd be hard-pressed to find another movie collection on Blu-ray with four greater films than the titles you get here. Additionally, three of the four (with 'The African Queen' being the only notable exception, although it does contain an informative documentary) are so jam-packed with extras that it will take the average viewer days to get through all the provided materials. While there's nothing new here in terms of content, if you don't already own the individual releases of these titles this is a must-own set for anyone's collection. Highly recommended!

Sale Price 89.95
Buy Now
3rd Party 85.97
In Stock.
See what people are saying about this story or others
See Comments in Forum
Previous Next
Pre-Orders
Tomorrow's latest releases