If you’re not familiar with 1988’s Vampire Kiss, starring Nicolas Cage at his most wild, you’ve likely seen the gifs and memes attached to it. How about the scene of him reciting the alphabet, cheekily pointing at someone, or the to-die-for wide-eyed expression? From the cover, you might anticipate a vampiric romantic comedy on par with Jim Carrey’s Once Bitten, but you’d be dead wrong. Instead, it’s an uncomfortable, despairing exploration of one slowly losing touch with reality and latching onto all the darkest elements of humanity. Think more Joker or Taxi Driver. It’s not a fun sit, but it’s consistently compelling for Cage’s performance and the collector’s A/V shine the MVD Rewind Collection gives its new Blu-ray release. Worth a Look!

It’s seldom to get truly original takes on vampires in cinema. Of course, I’m talking about the ones that are drenched in social commentaries, such as Abel Ferrara’s The Addiction.

Vampire’s Kiss is a film that’s not for everyone. If you pick up MVD Rewind Collection’s Blu-ray and throw it on for a nighttime watch, there’s a good chance it will divide your household or produce some living room walkouts. (I know my wife tuned out quickly once the discomfort meter kicked up after about ten minutes.) I, too, felt that feeling of wanting to shower yourself clean of the experience as soon as it was over. 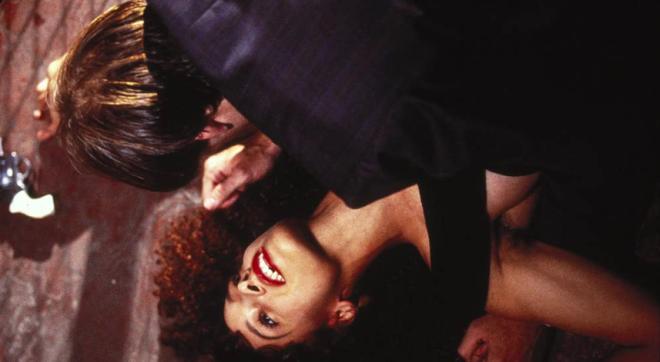 However, the film is incredibly haunting. For those who can plug into what Cage is doing, you simply cannot look away. There’s been an ongoing debate about whether Cage’s performance as white-collar New Yorker Peter Loew is bad in this. When you’ve spent the last 30+ years soaking in all the insanity of his work and what he brings to it, it’s difficult not to chuckle at the energy Cage brings to his roles.

In Vampire’s Kiss, portraying a publishing executive alongside Jennifer Beals and Kasi Lemmons, the self-proclaimed thespian is operating on another truly impressive level. How he fiercely instructs his character’s office assistant (a very good Maria Conchita Alonso), runs about in the night, and holds conversations with himself on street corners; no one else can do what Cage does. His performance is actually quite scary and remarkably sad considering you’re following a lonely man who drives himself crazy because of his inability to find love. Cage is completely unpredictable. You don’t know if he’s going to blow kisses your way or jump on a desk. As a result, you can feel your mind slipping away just as he is. 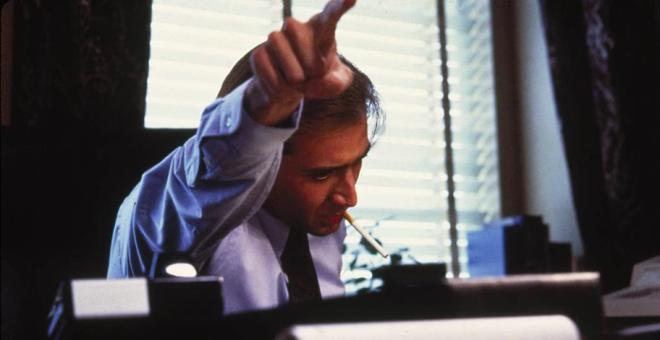 The primary reason why one should see this film is for Cage. As interesting as some of the visual work is, where the camera feels tucked into room corners or flying on shaky car cranes, it all becomes a blur compared to what’s happening front and center with Cage.

So, if you can stomach the experience of watching Cage dive headfirst into the mouth of madness, Vampire’s Kiss will take you to some places. You may not love where it goes, but once you’ve had some space from it, you may admire the hell out of it. 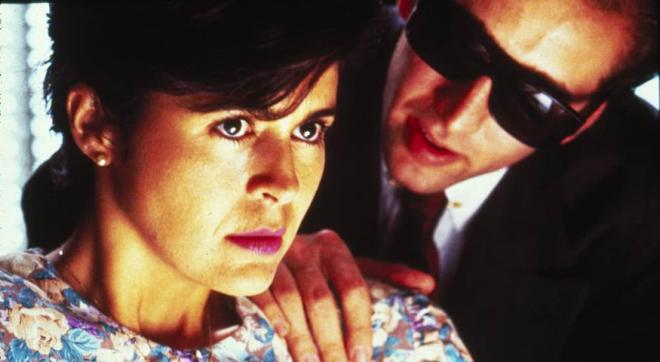 Vital Disc Stats: The Blu-ray
The now-available Blu-ray release is housed inside a cardboard slipcover and a clear plastic casing with reversible cover art and a mini poster. It’s one of the most straightforward designed covers in the Rewind Collection. Still, the poster design is effective and captures your interest, especially with the VHS tape-like edgewear and “Be Kind, Rewind” sticker. It’s made to look like a movie with some history, and some history it has.

Vampire’s Kiss is a high definition (1080p) transfer presented in a 1.85:1 aspect ratio. The film begins with a worn, dirty appearance during the opening credits. But it soon settles into a relatively slick and pristine presentation (for what it is) that highlights details in clothing fabric and surface textures. 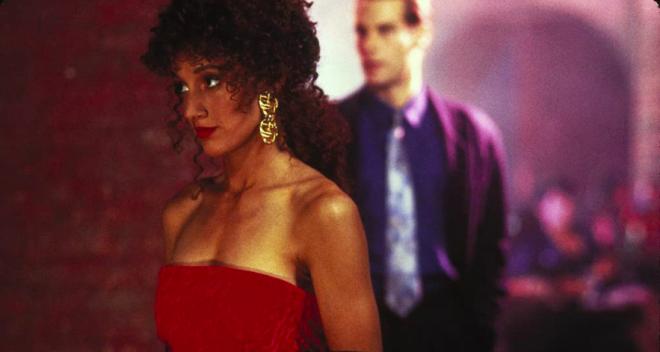 However, the true standout of the entire look on Blu-ray is whenever the color red populates the screen. Overall, Vampire’s Kiss doesn’t feature a wide range of colors. Instead, it’s primarily variations of black, gray or brown. So, whenever red appears in the form of blood or a piece of clothing, it takes hold without being overly flashy. Also, look out for consistently natural skin tones. For example, you can clearly make out character scarring when the film frames Cage’s neck in a medium shot. 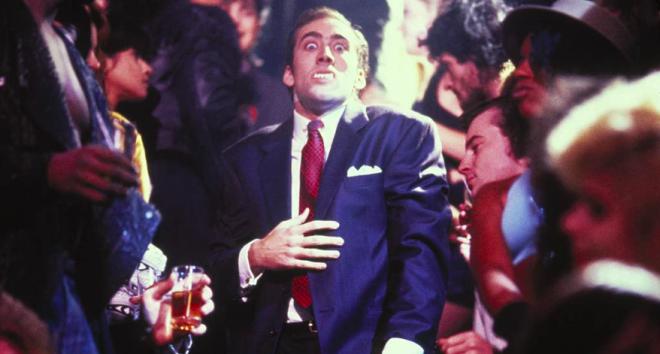 Vampire’s Kiss features a suitable and efficient LPCM 2.0 track. Between this and Scream Factory’s 2015 Double Feature Blu-ray release of Vampire’s Kiss and High Spirits, the differences are undetectable. The new release has some playful volume ranges and pitches the deeper we dive into Peter’s psyche and the visions he has. The sound effects are wholesomely mixed in with the well-balanced score by Colin Towns. The club sequence, when the real stuff goes down, especially crackles.

Unfortunately, if you’re chasing a true collector’s edition, there’s not much here to sink your teeth into. What it needed: Of course, it’s completely understandable that it’s difficult to come by many materials that haven’t been released before when you’re on a specific budget. For MVD, it’s likely just about throwing a better-known title or a movie with a more recognizable talent in the collection every now and then to keep more eyes on the label’s activity. But a film historian’s biting critique would have been a nice addition as a commentary or essay. This is a film that promotes discussion, and it should feature more discussions on it.

Vampire’s Kiss is a peculiar work that should remain relevant for Cage’s performance and the film’s comments on loneliness. It may not be a national treasure, but MVD Rewind Collection’s packaging makes it appear like it is. So, if this is in your blind spot and you’re itching to watch something wild at heart, take the plunge. It’s a bit icky and may not be worth owning unless you’re a Cage or Rewind Collection completitionst, but it’s also unforgettable.