Even if you're a fan of the 1947 original, you'll appreciate, enjoy, and be dazzled by writer-director Guillermo del Toro's captivating adaptation of Nightmare Alley. The Best Picture nominee delivers on a multitude of levels - riveting story, inspired direction, top-notch performances, eye-popping cinematography, and impeccable production design - and Paramount's excellent Blu-ray rendering allows us to appreciate every element. Razor-sharp video and a five-star audio track thrust us into all the dark, violent themes that pervade this fascinating and artistic neo-noir. Recommended.

"Remakes have always been a dicey business and often inspire spirited debate among movie fans. Steven Spielberg's reimagining of West Side Story is the latest example of a controversial remake, but unless you're a diehard devotee of Hollywood's Golden Age, you might not realize another of 2021's Best Picture Oscar nominees is also a redo of a decades-old motion picture. Unlike the original West Side Story, Nightmare Alley bombed at the box office when it premiered way back in 1947, but the devilishly good film noir about a devilishly handsome, fraudulent psychic who swindles the naive elite developed a rabid cult following as the years ticked by. Though writer-director Guillermo del Toro's hypnotic remake got the same lukewarm reception upon its release, I wouldn't be at all surprised if it, too, finds a faithful fan base in the future.

Visually stunning from start to finish, Nightmare Alley is a psychedelic odyssey into the depths of a tortured, twisted soul, and for the director of such dream-like films as Pan's Labyrinth and The Shape of Water, it's a perfect fit. I'm a huge fan of the original Nightmare Alley, so was more than a little leery of this remake, but aside from running about a half hour too long (a common malaise among today's movies), del Toro's Nightmare Alley completely won me over. Every element of this engrossing neo-noir is executed to perfection - the Oscar-nominated production design and cinematography definitely deserved to win their respective categories - making it not only a worthy successor to the original, but also an admirable, stand-alone cinematic achievement.

Just as Spielberg strove to present a more authentic West Side Story that would viscerally connect with contemporary audiences, del Toro is free of the censorship constraints that diluted or excised Nightmare Alley's racier, more violent, and more disturbing components in 1947. Del Toro claims his version is not a remake per se, but rather a fresh adaptation of William Lindsay Gresham's novel, and after viewing the film, I wholeheartedly agree. Though I miss specific parts of the original, del Toro's ability to depict episodes that were verboten 75 years ago lends the tale both an invigorating vitality and a greater feel of devastation and despair." 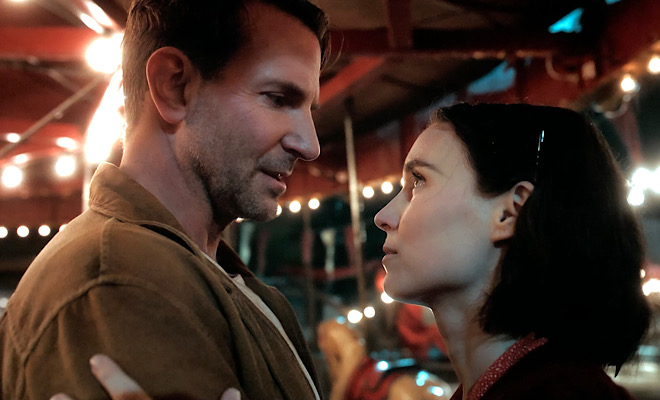 Vital Disc Stats: The 4K Ultra HD Blu-ray
The 2021 version of Nightmare Alley arrives on 4K UHD packaged in a standard case inside a sleeve. A leaflet with the Movies Anywhere digital code and 1080p Blu-ray disc are tucked inside the front cover. Video codec is 2160p/HEVC H.265 and audio is Dolby Atmos. Once the disc is inserted into the player, the static menu with music immediately pops up; no previews or promos precede it.

Nightmare Alley is a visually arresting film, and the high-quality 1080p/AVC MPEG-4 transfer faithfully honors the artistry of cinematographer Dan Laustsen, who received a well-deserved Oscar nomination for his stunning work. He and Del Toro masterfully recreate the look of Golden Age movies without abandoning contemporary conventions, and this transfer showcases their impeccable craftsmanship. 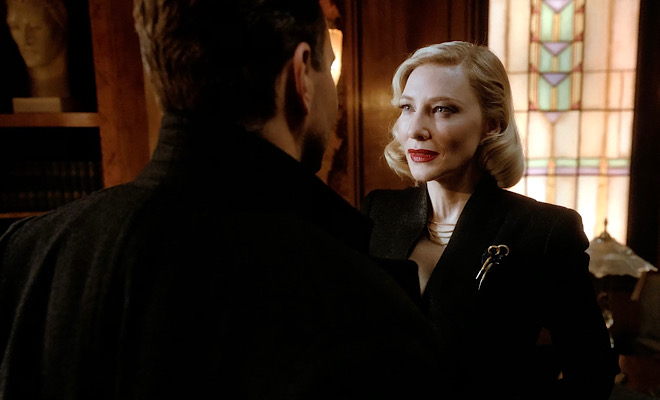 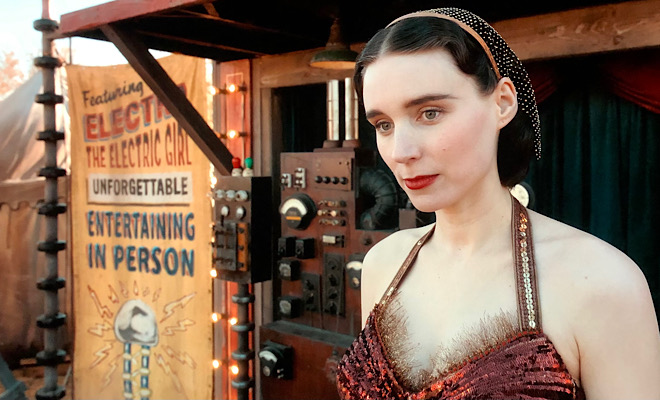 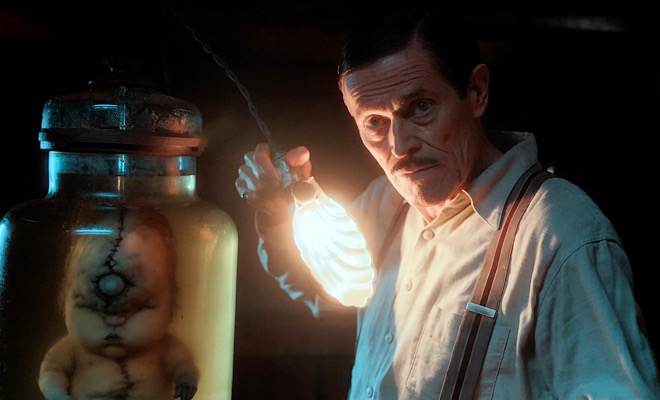 While not as dazzling as the 4K UHD presentation with HDR, the Blu-ray transfer still boasts a sharp, incredibly film-like image despite the reduction in definition and more limited color spectrum. Excellent contrast, superior shadow delineation, and an array of vivid colors combine to create a pleasing picture accented by rich, inky blacks and crisp whites. Much of Nightmare Alley takes place - appropriately - either at night or in dark, murky interiors, but the picture is always beautifully defined. Gold tones predominate in Lilith's wood-trimmed office, emitting a warm glow, while a stark coldness pervades the carnival scenes, accentuating the grit, grime, and garishness. Bold reds, verdant greens, and cool blues accent the image, background elements are easy to discern, costume textures, falling snow, and noir accents like steam and swirling cigarette smoke are distinct, and close-ups are sublime. Not a single speck dots the pristine print and no digital artifacts intrude.

Nightmare Alley requires a strong transfer to fully showcase its artistry, and this rendering more than delivers the goods.

The DTS-HD Master Audio 5.1 track provides a potent and immersive audio experience that greatly enhances the drama on screen. Plentiful surround action creates an immersive soundscape that thrusts us into the period atmosphere and carnival setting. Excellent stereo separation across the front channels creates additional aural interest, while an expansive dynamic scale embraces the understated yet potent score by Nathan Johnson and handles all of its highs and lows without any distortion. Sonic accents like gunfire, fisticuffs, revving car engines, and shattering glass are crisp, and all the dialogue is clear and easy to comprehend. Though the Atmos track on the 4K UHD disc is more nuanced, this DTS-HD MA track unleashes more power. Audiophiles and casual listeners alike will be thrilled by this active mix that's guaranteed to give your system a good workout.

A trio of featurettes, all of which are housed on the 1080p Blu-ray disc, comprises the supplements.

Engrossing, stylish, seductive, and brimming with director Guillermo del Toro's inimitable brand of artistry, the 2021 version of Nightmare Alley stokes the senses as it searingly explores the dark depths of the human soul. The accomplished cast embodies the grotesque characters in this seedy, violent tale of greed and grifting, but it's the hypnotic visuals that are the real star of this elegant yet disturbing film. An excellent video transfer and  reference-quality audio immerse us in this immoral underworld that comes closer to recapturing the essence of classic film noir than any other movie of the 21st century. Recommended.