From a Whisper to a Scream (Offspring) - German Media Book

Horror icon plays host in the chilling and wildly entertaining horror anthology From a Whisper to a Scream aka The Offspring. Writer/Director Jeff Burr (The Texas Chainsaw Massacre III) spins three tantalizing tales of terror with Price as headmaster featuring a terrific cast of genre actors including Clu Gulager, John Cameron Mitchell, Susan Tyrrell, and Terry Kiser. Long out of print in the U.S., German label Turbine Media Group delivers fans a terrific 4-Disc Limited Edition Media Book release with hours of bonus features, 40 pages of pictures and essays, and the film’s soundtrack on CD. If you missed out or are looking to upgrade - this is a hell of an awesome set well worth digging into! Highly Recommended

In Tennessee there rests the small town of Oldfield. But this small town doesn't have the happiest of memories. On the night of the execution of the serial killer Katherine White, reporter Beth Chandler (Susan Tyrrell) interviews her reclusive librarian uncle Julian (Vincent Price). It is there that Julian will recount four sad and terrifying tales of woe and misery that have befallen residents detailing the history of the sleepy town of Oldfield. 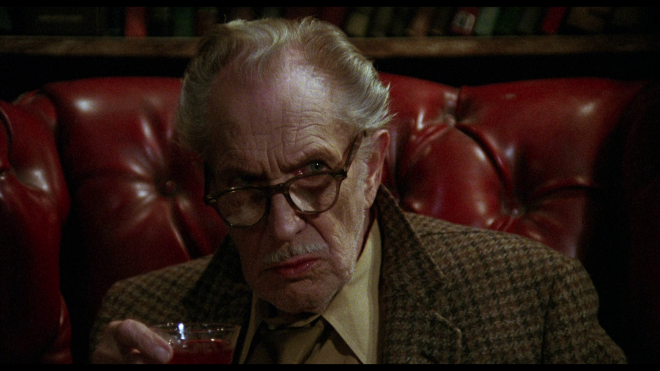 I love a great horror anthology. When they’re done right they can be impressive feats of filmmaking, or they can crumble apart and hardly be memorable. Thankfully From A Whisper to a Scream is one of the more memorable endeavors thanks to some clever stories, fun twists, gnarly gore, and Vincent Price. However, it does fall inwto the trap of having one or two very strong stories that overshadow the rest of the lot. The story that has always stuck in my brain was the opener Stanley starring Clu Gluager, Megan McFarland, and Miriam Byrd-Nethery. You don’t forget that gnarly finish!

While maybe not quite as good as the opener, the rest of the stories are pretty strong leading to a fitting epilogue. Any time you can get Terry Kiser or John Cameron Mitchell chewing some scenery, you’re in for a treat. I also thought it was a clever idea to have the stories in chronological order. As you go back in time you learn more dark secrets of the town right up to the moment the little hamlet was founded. The one outlier story for me was the third one about the carnival freaks. It's a fine story on its own, but it doesn't really feel like its a part of the other stories. It could slip into any horror anthology film. As fun as the story and shocking finale are, it still feels like it belongs in a different movie without such a tight structured premise of the town's dark history. 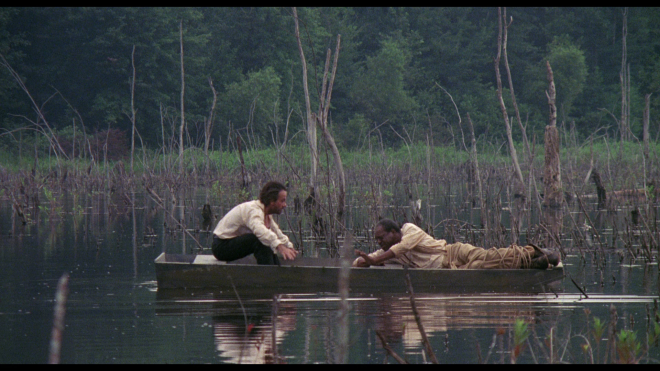 If there’s a fault to wager against this film is that it can feel a bit amateurish at times. Camera angles aren’t all that inventive and the film often has a flat matter-of-fact presentation. But you can’t really fault Jeff Burr for that, it was his first feature film and shortcomings aside it’s still pretty damned impressive. When the big story payoffs come, they hit hard and with plenty of gnarly viscera that'll either shock you or put you on the floor with laughter. Plus, anytime you get Vincent Price on the screen it’s worth the time you give it. At that point in his career he only showed up if he really wanted to, and he must have seen something in this little production worth being a part of.

For another take on the film, read our 2015 Blu-ray Review 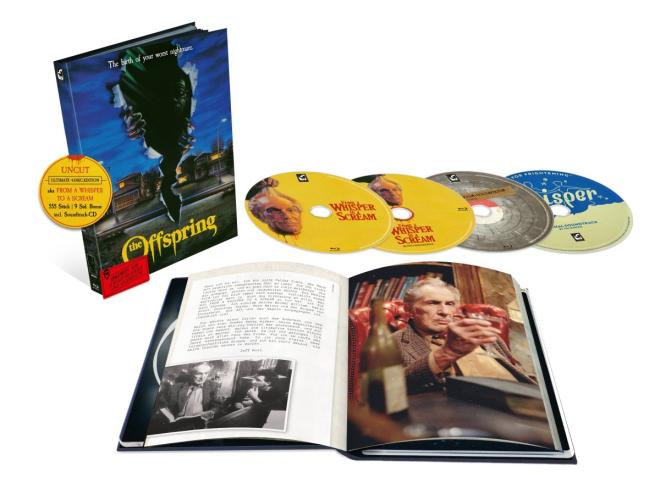 From a Whisper to a Scream creeps its way back onto Blu-ray thanks to Turbine Media Group in an impressive Limited Edition Media Book 4-Disc Blu-ray + Soundtrack CD set. All discs are Region Free. There are four different cover styles to choose from showcasing various alternate original poster and VHS box art designs. Inside is 40 pages of images and essays in both German and English. The disc loads to an introduction from director Jeff Burr before arriving at a static image main menu. The menu is initially in German but when you switch the audio language to English the disc menus change as well. 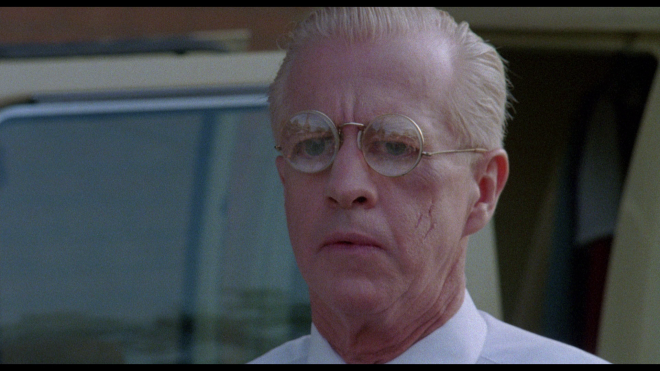 Sadly I waited too damn long to grab Scream Factory’s edition, so I don’t have that as a basis of comparison, but this 1.85:1 1080p transfer is in pretty damn great shape. Details are impressive giving you a full appreciation of Julian’s creepy little home as well as all of the makeup effects, costuming, and period-specific production design peppered throughout the show. Colors are bold with some great primaries and skin shades are natural and healthy. Film grain is present and can be a bit thick in a few scenes, but nothing distracting keeping a welcome organically cinematic appearance. Elements are in great shape with only some mild incidental speckling that’s barely notable. 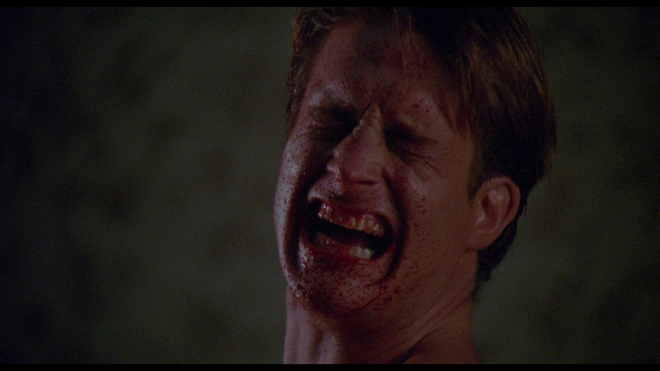 Being a German release, the Deutsch audio track is default so you need to go to the relevant submenu and switch over to the English DTS-HD MA 2.0 mono track. The audio for this release is solid, a bit upfront without a lot of spacial atmospherics but all in all it gets the job done. Dialog is clear throughout without much issue. Some exchanges are a little tinny or hot sounding, but nothing too stiff to complain about. Sound effects and scoring do well enough to set the scene but imaging is fairly subdued for most of these stories. Screams get the necessary attention they deserve. Some cannon fire in the last installment kicks nicely. 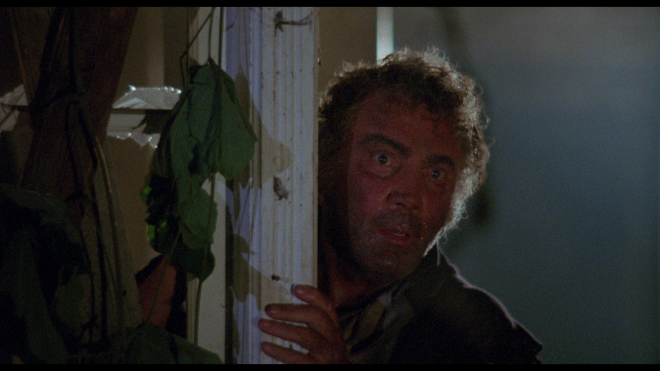 This is where things really pick up for this release. Not content with just rehashing the same set of bonus features - Turbine Media Group really threw everything at the wall with this one. Not only do you get three audio commentaries, but there are roughly over 9 hours of additional bonus features spread over the three Blu-ray discs with the film’s soundtrack on CD. There’s a LOT to dig through here so if you missed out on the previous release in the States, you’re getting all that and more! 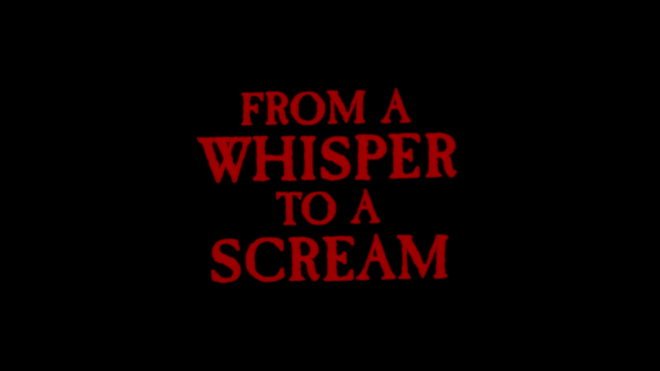 Co-writer director Jeff Burr brings together a series of creepy tall tales about the founding of Oldfield, Tennessee. For a first-time feature, it has the energy and vigor of a big production made with small means. The quality of the stories wavers here and there, but there’s plenty of creepy mood and atmosphere to go around with plenty of shocking and unsettling moments to highlight this little adventure. Plus, you get Vincent Price playing storyteller and that’s always worth jumping in for. After going out of print in the States, From a Whisper to a Scream gets a new lease on life from Turbine Media in a deluxe 4-Disc Mediabook release. With a great A/V presentation and hours of bonus features with the film’s soundtrack on CD, you have tons of great stuff to dig through. If you’re a fan that needs this film in your collection, find some shelf space - Highly Recommended.