Detour may take the road less traveled in its stark, no-frills presentation, but thanks to director Edgar G. Ulmer’s inventiveness and artistry, this low-budget film noir outshines many of its big-budget counterparts. Criterion’s stunning restoration brings a tragic beauty to this dark, devastating look at one man’s spiraling descent into corruption and crime. No doubt about it, Detour is a must for noir fans, and comes very highly recommended.

“Fate - or some mysterious force - can put the finger on you or me for no good reason at all.”

Film noir is arguably the most fatalistic motion picture genre, and Detour, Edgar G. Ulmer’s gritty yet poetic masterpiece, just might be the most fatalistic noir film of all time. Made on a shoestring budget for a Z-grade studio, Detour is the little movie that could...and still does. Seventy-five years after it premiered on the lower half of double bills in 1945, this tightly plotted, 69-minute chronicle of desperate longing, dashed dreams, and cruel injustice continues to dazzle - and devastate - audiences. It may have humble and diminutive roots, but like cream, Detour has risen to the top and become a shining beacon of noir in its purest and starkest form.

“That’s life," says Al Roberts (Tom Neal), an aspiring musician who can't catch a break. "Whichever way you turn, fate sticks out a foot to trip you.” It's hard to argue with that logic, and in a nutshell, that's the premise of Detour, which casts everyman Al as a continual victim of circumstance in a there-but-for-the-grace-of-God-go-I kind of story. While nursing a cup of coffee in a dingy diner in the middle of nowhere, deadbeat Al reminisces about his bum luck. His tale of woe begins innocuously enough, as he and his vocalist girlfriend Sue (Claudia Drake) eke out a few bucks a night playing with a two-bit combo band at a New York bar. Antsy and dissatisfied, Sue decides to try her luck in Hollywood. Al stays behind, but a few months later he gets fed up, too, and decides to follow her. Bereft of funds, he hitchhikes across the country, and one fateful day on the hot Arizona blacktop, Charles Haskell (Edmund MacDonald) stops to give him a lift.

A loaded businessman with a sketchy past, Haskell takes Al under his wing, buying him food and promising to take him all the way to L.A. Al agrees to share the driving, but a late-night desert downpour forces him to pull off the road and pull up the convertible's top. Haskell is knocked out on pain pills and can't be roused, so when a frazzled Al opens the passenger door to enlist his help, Haskell falls out and hits his head on a boulder. The impact instantly kills him. Al is panic-stricken. He knows the police won't buy a destitute hitchhiker's account of how a rich dandy accidentally met his death, so he impulsively decides to assume Haskell's identity, drive to L.A., ditch the car, and hopefully begin life anew with his beloved Sue.

Al might have been able to escape fate's twisted grasp if he didn't stupidly decide to pick up Vera (Ann Savage), a grungy gal looking for a ride at a desert gas station the next day. “You give a lift to a tomato, you expect her to be nice, don’t you?” Al muses. A fair assumption, but he's dead wrong about Vera. Angry, disillusioned, manipulative, and mean, Vera sinks her claws into Al and won't let go. She's got his number and never stops dialing it. As hard as he tries to disentangle himself, Al finds himself caught in the web of a ruthless black widow who takes him on another perilous detour fraught with setbacks and pitfalls, and leads him down a dead-end road to doom.

Necessity, they say, is the mother of invention, and Ulmer, one of Hollywood's greatest unsung directors, took that adage to heart during Detour's production. Making the most of the few rudimentary tools at his disposal, he crafts a surprisingly artistic film that takes us on an unforgettable journey through the depths of the human spirit. Ulmer sprinkles masterful touches throughout the tale that belie the film’s bargain basement status, yet his seductive style complements the gripping plot and dark themes without impinging upon them. At times, Detour is rough around the edges and a bit sloppy, but name a film made by PRC (Producer’s Releasing Corporation) that isn’t. Lower in status than Republic and even Monogram, PRC made those poverty row studios look like MGM or Warner Bros. Yet Ulmer refused to be handcuffed by his lack of resources, and used his talent and ingenuity to create one of the most beautiful cheapo films ever made.

The melancholy mood and aura of despair that swirl about the tortured characters set the movie’s tone (the periodic use of snatches of the popular tune “I’m Always Chasing Rainbows” to highlight the futile nature of Tom’s life is a brilliant touch), while Ulmer’s striking visuals enhance the narrative’s power. The script by Martin Goldsmith - who would nab an Oscar nomination seven years later for another taut noir thriller, The Narrow Margin - is sparse yet wonderfully lyrical. Al’s introspective, emotional narration is especially literate and moving, and it’s delivered with just the right mix of forthrightness, pain, and irony by Tom Neal, a hard-working, pugnacious B-movie actor whose life would eerily mirror Al’s. (Twenty years after Detour was released, Neal shot his wife in the back of her head and served six years in prison for involuntary manslaughter.) With his sad eyes, average joe demeanor, and omnipresent wounded-animal expression, Neal instantly gains our sympathy, but he also lends Al a quiet dignity and natural grace that resonate over the film’s course and beyond.

Savage, of course, is his polar opposite, and the dichotomy generates plenty of tension. Just as Vera hijacks Al’s life, Savage hijacks the movie, stealing focus and making it impossible to concentrate on anything or anyone else while she’s on screen. With a ferocity that perfectly reflects her last name, Savage devours her role like a juicy piece of raw meat and seems to relish every bloody bite. Her popping eyes, disdainful glares, and predatory snarls evoke Bette Davis on steroids, but it's doubtful even Davis could pull off this tricky part. Rarely has Hollywood spawned a “heroine” so unabashedly and unapologetically nasty. Vera seethes with resentment and hate, raging against a world that’s wronged her, and when she releases the wild beast within, she becomes a predatory creature ready to rip any adversary to shreds.

Most noir bad girls use beauty, sex, sophistication, pity, and plenty of honey-toned come-ons to snare their unwitting prey, but Savage’s disheveled, downtrodden Vera forgoes false airs and fake vulnerability in favor of a brutal directness that instantly telegraphs her nefarious intentions. There’s no ruse, no angle with this diabolical dame. She doesn’t have to use her body to get what she wants; her desperate spirit is a far greater asset and weapon. Lana Turner’s Cora (The Postman Always Rings Twice), Barbara Stanwyck’s Phyllis (Double Indemnity), Ava Gardner’s Kitty (The Killers), and Jane Greer’s Kathie (Out of the Past) are the femme fatales of our dreams, but the virulent Vera is the femme fatale of our nightmares.

Unlike many of its better-known noir cousins, Detour isn't flashy or clever, but it strikes a nerve, connecting with a visceral force that often provokes a queasy feeling of unease. At times, the film is as raw and painful as an open wound, and as dusty and grimy as the desert highways, city streets, and dumpy interiors where its action transpires. Yet thanks to Ulmer, a strange beauty swirls about this spiritual wasteland that heightens the tale’s impact. Detour defines film noir, and like its battered and bruised hero, its bleak denouement leaves us feeling as if we’ve been punched in the gut. Once you finish watching this riveting drama, though, you'll want it to beat you up all over again. 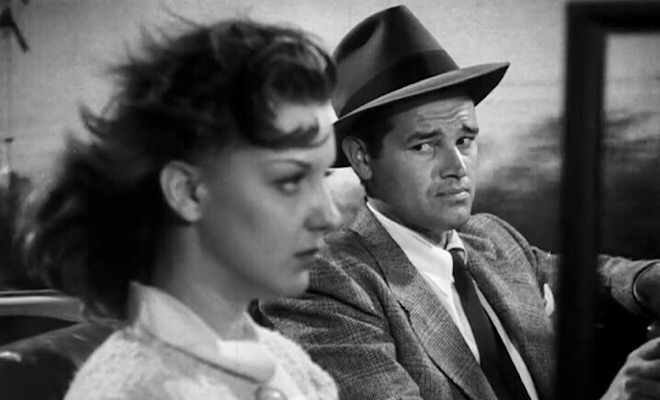 Detour arrives on Blu-ray packaged in a standard Criterion case. A 32-page booklet, featuring a lengthy essay by Robert Polito, numerous scene stills, a cast and crew listing, and transfer notes is tucked inside the front cover. Video codec is 1080p/AVC MPEG-4 and audio is LPCM mono. Once the disc is inserted into the player, the full-motion menu with music immediately pops up; no previews or promos precede it.

Restoring a public domain film like Detour is quite an undertaking, but leave it to Criterion to scour the world for the finest available elements and toil tirelessly to present the finest possible version of this film noir classic. According to the liner notes, “a new digital transfer was created...from a 35 mm nitrate composite print with French and Flemish subtitles...[and] a 35 mm safety duplicate picture negative from [the Museum of Modern Art] was used as a compositing source for removing the subtitles.” Digital painting techniques were used to remove subtitles when the compositing source did not include specific frames, and a missing shot from both those sources was incorporated into the restoration from a 35 mm safety composite print.

All that dogged detective work and meticulous attention to detail pay off handsomely in this marvelous 1080p/AVC MPEG-4 rendering. If only all low-budget films could receive such tender loving care. From the first frame onward, the image looks crisp and clean, sporting excellent clarity and contrast. Grain is evident and its intensity fluctuates, but it adds essential gritty texture to this tough, downbeat tale. Blacks are rich, whites are bright, and all the grays in between are wonderfully varied. Shadow delineation is especially good and close-ups showcase fine details like glistening sweat and facial stubble to perfection. The presentation isn’t perfect -  a bit of print damage remains, there’s some fleeting image instability, and an occasional missing frame - but Criterion has worked miracles with the elements at its disposal and fashioned an impressive transfer. It’s nice to see a B movie get the A treatment. You may have seen Detour before, but you’ve never seen it like this.

The LPCM mono track was restored from three separate 35 mm prints, as well as a 16 mm print, and the results are quite good. The music score by Leo Erdody (billed here as simply Erdody) sounds especially lush and full-bodied, sonic accents are distinct, and all the dialogue is clear and easy to comprehend. Some faint surface noise can still be heard, but it never detracts from the experience. Low-budget films rarely feature complex audio and Detour is no exception, but thanks to this fine restoration, the track sounds fresh and vibrant...and you can’t ask for more than that.

This Criterion release skimps a bit on supplements, but as always, the quality is top-notch. An audio commentary surely would have added some welcome context and perspective, but its absence is forgiven.

Detour may not be flashy, but it’s dark, taut, and devastating. This bargain-basement film noir brims with artistry as it chronicles how an upstanding man’s straight-arrow life takes an unexpected crooked turn. A masterpiece of economy, Edgar G. Ulmer’s film helps define a genre and proves a movie is only as good as its director. Criterion brings this public domain title back from the dead with a stunning restoration that showcases its beauty and maximizes its impact. Though it’s far from pleasant, this is one detour that’s well worth taking. Highly Recommended.

Sale Price 20.93
List Price 39.95
Buy Now
3rd Party 19.88
In Stock.
See what people are saying about this story or others
See Comments in Forum
Previous Next
Pre-Orders
Tomorrow's latest releases