Village of the Giants

Giant ducks, teens, and a mysterious goo bring Bert I. Gordon’s Village of the Giants to life. Very loosely based on the classic H.G. Wells story, we see Tommy Kirk and little Ronny Howard go head to head against Beau Bridges and his gigantic band of dancing rampaging teenagers in this high-camp 60s sci-fi classic. On Blu-ray from Kino Lorber Studio Classics, the disc boasts an impressive if ever-so-slightly problematic transfer with clean audio and a nice commentary track. For fans of cheesy science fiction, this is a fun one. Recommended.

Trouble-making Fred (Beau Bridges) and his gang of miscreant friends arrive in a small town after a storm has washed out the roads. While they’re hitting the local go-go, Nancy (Charla Doherty) is trying to snuggle up to her boyfriend Mike (Tommy Kirk) when her science-whiz little brother Genius (Ronny Howard) accidentally invents the “Goo,” a pink slime that turns whatever eats it into a giant. Mike sees a chance for millions while Fred and his pals see a chance to get big themselves and prevent the grownups from messing with him ever again. It’s a race against the clock to stop these giant rampaging dancing teens from taking over the town and possibly the world! 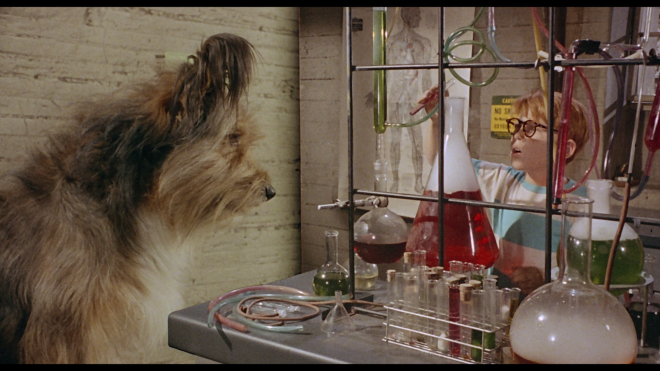 Bert I. Gordon is practically a cottage industry of low-budget science fiction. Whether it’s a spider, a grasshopper, or a group of teens, Bert lives up to his initials and will make them BIG! H.G. Well’s classic story Food of the Gods would prove to be an inspiration for two of Gordon’s films. Neither is especially great, but Village of the Giants is its own brand of weird and wild. Loosely adapting the basic idea of a thing whence consumed makes someone or something huge, the film is a bizarre mix of teen rebellion counterculture, beach dance movies, and classic science fiction. To cap it off, Gordon did his own visual effects work often with varying results.

For most folks out there my age, if you have any familiarity at all with this film it’s likely due to the classic Mystery Science Theater 3000 episode. Far from being a terrible movie, it’s hard to argue against this film being anything but an entertaining flick that aimed for a particular target audience. Parts are a fun romp but the film also doesn’t really know what it wants to be. The back-to-back-to-back song/dance numbers of a classic Beach-Party flick against the counterculture angry teens trope with it’s very tongue-in-cheek sense of humor doesn’t always work. But, the film's energy and sense of bawdy cheeky humor is fun enough to keep it going through to the finish with a pretty terrible final gag.

All credit to the cast for doing their best to keep this thing together. Tommy Kirk made the film during a career low after his drug issues became public. In some scenes, he still looks high out of his gourd, but for the big Tommy Kirk vs Goliath finale, he picks up the energy and gets something to do. Little fully-follicled Ron Howard gets to be more of a lead than Kirk since he's basically the only one that gets anything done. Robert Random, Joy Harmon, and the rest of the wild teenager gang do their best to look and act tough, but it’s Beau Bridges that has to carry that load as the ringleader Fred. The “giant” effects are decent enough but it’s poor Beau who had to show his thin-as-stilts rubber “legs” complete with knobby knees and copious amounts of shag hair glued on. 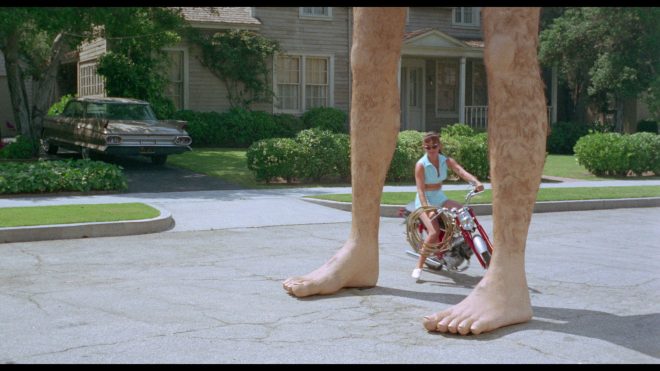 This is one of those love it or avoid it sort of classic sci-fi flicks. As I said, Bert I. Gordon movies are their own brand of entertainment. You have to give the man a lot of credit for doing the visual effects himself and his knack for creativity, but he often bites off more than he can chew. There’s always a certain point where the movie just goes a little over the rails. For this one, it’s about the point that a doll made up to look like Johnny Crawford clinging to a “giant” woman’s huge cleavage where you’re going to be laughing with the movie or want to abandon the effort altogether. For fans of schlock science fiction, it’s worth the effort. People looking for a heady adaptation of Wells’ story came to the wrong show.

Vital Disc Stats: The Blu-ray
Village of the Giants arrives on Blu-ray thanks to Kino Lorber Studio Classics. Pressed on a BD-50 disc, the disc is housed in a standard sturdy keepcase. The disc loads to a static image main menu with traditional navigation options. 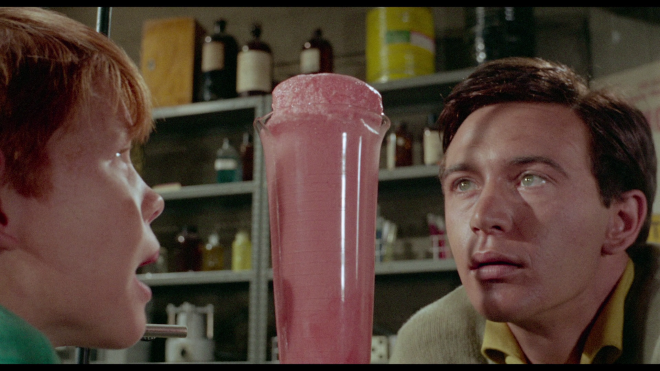 After watching this film for years in its video-sourced MST3k form, Village of the Giants comes home with an impressive new transfer sourced from a 4K restoration by Studio Canal that is damn near perfect except for one glaring issue. While details are impeccable with a natural grain structure, and some robust bright primaries - the image transfer is way too bright. Almost blindingly so in some sequences. When the movie starts things are generally great, you can fully appreciate the muddy location and the textures of the teens’ water-logged clothing. When the teens get to the theater and Bridges is putting on that red cardigan it’s almost blindingly bright red and the scene loses the natural textures we were just enjoying. And the transfer kind of comes and goes like that. Some shots are picture-perfect, and then the next shot is so blown out it actually causes eye strain. On the list of rough but can’t be helped scenes are the numerous optical effects shots. Again, Bert I. Gordon was notorious for doing these on the cheap himself so they vary in quality. Some shots of Beau Bridges “walking” through town can look pretty good. The shots of the giant ducks being shooed out by Tommy Kirk are especially rough as its multiple shots layered on top of each other. Considering the film, this is probably a better result than we could have expected. 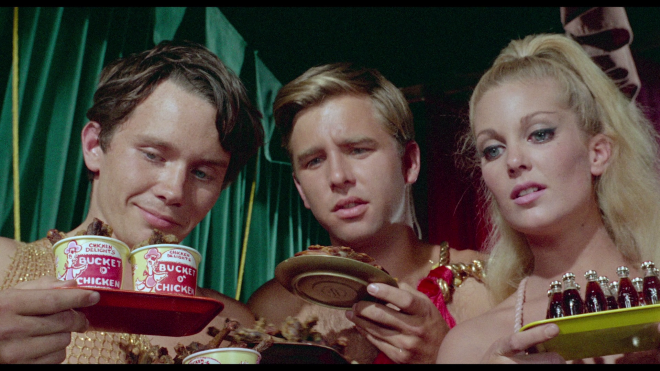 The film also comes with a DTS-HD MA 2.0 mono track that is pretty good - but the film’s uninventive sound design won't do much to wow you. Between the Nitzsche score and the few Beau Brummels tracks, the film schemes to keep its sound design firmly rooted in a 60s go-go lounge. For some reason to suggest the height of the giant teens, the camera was over-cranked slightly and then dialog was either mixed a tad slower or spoken slower. So when Bridges and his teen friends are slowly throwing spears at a full-speed Tommy Kirk, it’s a very strange-sounding exchange. Other segments like when they confront the sheriff in the theater, Joe Turkel and everyone “little” sounds tinny and distant and very difficult to hear even though to scale they’re hardly 30 feet apart. Likewise for big action beats, outside of dialog and music, there’s a curious lack of any notable sound effects. That’s all part of the flavor of a Bert I Gordon flick. For what it is it’s clean and clear and works - but it’s still not a very dynamic mix, to begin with. 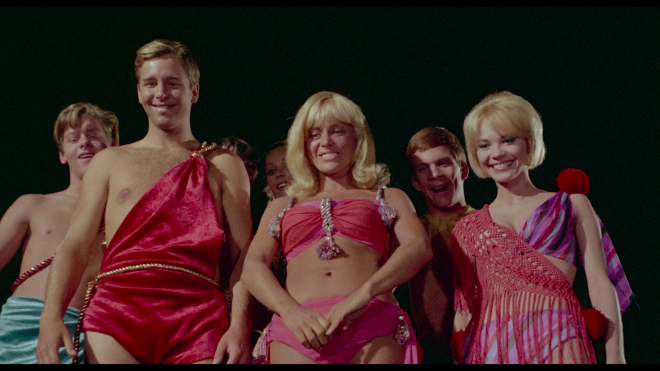 Bonus features are pretty light here. The only notable extra is a new Tim Lucas audio commentary which is very informative and loaded with production trivia. If you’re a Bert I. Gordon movie fan, you’re going to want to give that a listen. After the theatrical trailer, the only other extras are a pair of trailers for The Magic Sword and Jack the Giant Killer. 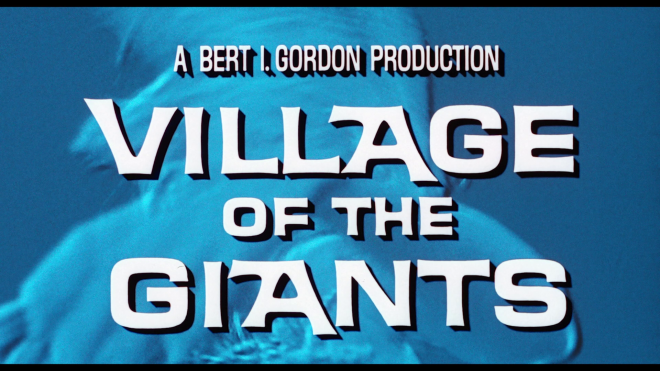 Village of the Giants may serve fellow Mystery Science Theater 3000 fans better than the average sci-fi schlock aficionado. Bert I. Gordon films uniformly demand you check your brain at the door. His films are made on low, low budgets that pull off more than they can usually adequately chew thanks to Gordon doing his own visual effects work. Village of the Giants is on the better end of the spectrum with a halfway decent budget and special effects. Nothing is quite as low as Gordon using a postcard of the Wrigley building with grasshoppers jumping around it like Beginning of the End! Kino Lorber Studio Classics delivers this silly science fiction delight to Blu-ray. The new 4K restoration from Studio Canal is impressive, but it’s also a bit too bright for its own good. Audio is clean and works for what it is. The Tim Lucas audio commentary is well worth the listen. If you love this sort of show, it’s a fun run for the collection. Recommended.