You can't spell "big" without Bert I. Gordon. The master of low-budget special effects spectacle turns his visual craft for BIG creature features to our arachnid nightmares with The Spider also known as Earth Vs The Spider. Short and to the point, the movie doesn't waste time and keeps the audience's attention long enough to be entertaining - if maybe not altogether memorable. Still - it's a hell of a lot of fun and Scream Factory delivers a Blu-ray with a solid A/V presentation and informative and entertaining audio commentary as well as the classic Mystery Science Theater 3000 episode! You know what you're getting into with Bert I. Gordon so if you're a fan of the man - this one is Highly Recommended.

Carol's (June Kenney) father has gone missing. Roping her boyfriend Mike (Eugene Persson) to drive out and look for him, the two high school lovebirds discover a wrecked truck belonging to Carol's father beside a cave entrance. He must be alive in the cave, right? Inside the cave, they discover a freak of nature - a spider of gigantic size! As the massive bug begins to terrorize their town - only the high school science teacher Professor Art Kingman (Ed Kemmer) may be able to figure out a way to kill the creature. 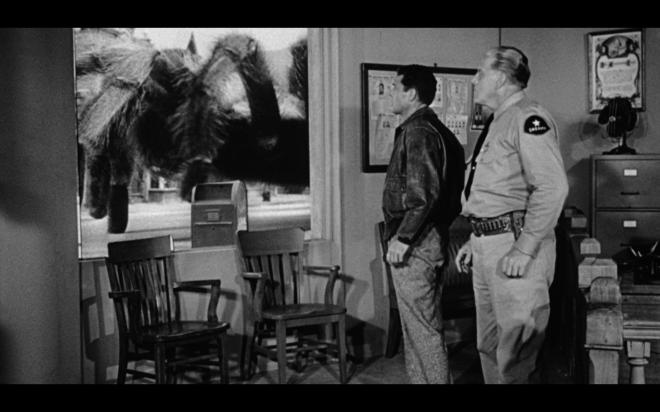 You got to hand it to Bert I. Gordon - the man has a formula! Usually, that formula involves some random creature or person growing to abnormal size threatening the whole of humanity, but he has a specific way of going about it. For your average B.I.G. flick like The Spider or The Beginning of the End, Bert follows the path of gigantic creature is discovered, a government official of sorts is tasked with killing said creature through normal means, when that fails the smarter person that knew better all along is prevailed upon to save the day. Sandwiched in there somewhere is someone in peril to add a ticking clock element for extra tension. While The Spider follows a very specific path without surprises - it's still a hell of a lot of fun.

Now, The Spider -- or Earth Vs The Spider if you prefer -- isn't a great movie. It's pretty pedestrian really. Clocking in at barely 70-minutes. It was designed for churn and burn double feature shows to pack in as many butts into seats as possible and maximize showings. Good old Bert even makes time for some shameless self-promotion prominently featuring large posters fo The Amazing Colossal Man while a character takes the time from the plot to plug Attack of the Puppet People. That said, what Bert always does well is craft big special effects on a meager budget - and The Spider is no exception. Using matte painting backgrounds, optical process shots, miniatures, and impressively constructed full-size props - he turns a simple tarantula into a towering beast of destruction!

At nearly 98-years old Bert is a legend in low-budget special effects features. As the man who owns the distinction of having the most films riffed by the crew of Mystery Science Theater 3000 - not all of his films are winners. Even as one of the better films in his catalog, The Spider is far from high art immune to a little audience participation. That's part of the fun of a movie like this. It's not clever enough to be genuinely scary and it isn't smart enough to be a science fiction marvel. Grab your copy of Universal International's Tarantula and you have yourself the makings of a perfect double feature!

The Spider invades Blu-ray in a single disc set thanks to Scream Factory. Housed in a standard sturdy case, the artwork is reversible with the only difference being the two different titles The Spider or Earth Vs The Spider. The disc loads to a static image main menu with traditional navigation options.

Presented in its original aspect ratio of 1.85:1, this newly restored 1080p transfer may not be the most beautiful thing ever, but the results are genuinely pleasing and much improved over previous DVD releases and the classic MST3k episode. This isn't picture-perfect pristine but I'm pretty happy with it. Film grain is apparent throughout and fairly well resolved without appearing too noisy, but details don't exactly leap off the screen - not that they ever really did during special effects sequences. With Bert's penchant for optical process shots to create the illusion of scale, softness is a frequent companion and grain can thicken quite a bit bringing with it additional speckling. Another trick Bert likes to use is optical zooms, as such details can fuzz a bit and grain becomes a little clumpier.

Technical limitations of the production aside, there is a lot to appreciate here. For starters, when there isn't a lot of optical trickery details are quite impressive. Black levels are deep and inky, maybe a tad close to crush, but depth is appreciable - especially when the spider attacks someone and there is a long slow zoom into a screaming person's face. Even when the crowd is running away from the superimposed spider background there's a nice sense of three-dimensional depth to the image. Grayscale is decent enough allowing for some welcome shading between light and dark objects. The cave sequences are pretty dark naturally but you never lose object detail. No signs of edge enhancement and certainly no signs of DNR. As a fan of this movie since childhood - I'm very pleased with the transfer of this film!

The Spider spins a decent DTS-HD MA 2.0 track. Much like the film's visual stylings, the audio mix isn't that impressive when an effect isn't on screen. When characters are talking to each other and moving around it's pretty basic with clear voices. When the effects come in the spider gets a shrill scream that is pretty damn creepy and coupled with the Albert Glasser score, things liven up quite a bit. Screams get an extra unnatural punch for dramatic effect - you gotta sell that terror somehow! All around the mix is pretty good - the crowd sequence is the best example of imaging of the film as cars crash, people run, and the spider rampages in the background.

While not dubbed a "Collectors Edition," Scream Factory provides some worthwhile bonus features for The Spider. The obvious inclusion is the classic Mystery Science Theater 3000 Episode - since the movie was so short to begin with, they hardly had to cut anything to make the episode runtime. Running in a close second is the informative and often hilarious Ted Newsom commentary track - the man clearly loves Bert I. Gordon's movies and he has a lot to offer here with some wit and humor.

No… The Spider or Earth vs The Spider is not a great science fiction movie. As a schlock show, it's content with showing you a gigantic bug, explain nothing, and entertain you for 70-minutes. Bert I. Gordon is a director who knows his audience and how to capture their attention. You want a giant spider movie - the ma delivers! The effects may not always be convincing but for a guy who did it all himself - it's pretty awesome! Scream Factory delivers The Spider to Blu-ray with a splendid A/V presentation as well as some decent bonus features worth picking through. If you're a fan - this is an easy one to call Highly Recommended - it's just too much fun!