Song of the Thin Man

A fitting swan song for an iconic series, Song of the Thin Man may not rival other entries in the franchise, but it's still an entertaining whodunit that gives William Powell and Myrna Loy one last hurrah as Nick and Nora Charles. The murder of a shady bandleader kicks off this jazz-infused mystery that's a bit more serious than previous Thin Man films. A winning transfer culled from the best preservation elements, solid audio, and all the extras from the 2006 DVD distinguish Warner Archive's Blu-ray presentation of this fond Thin Man farewell. Recommended.

All good things must come to an end, and when it comes to Hollywood franchises, most final chapters are mere shadows of the originals that spawned them. That's true of The Thin Man movies, too, but while Song of the Thin Man can't hold a candle to the first film in the series (and even a couple of its sequels), it's a respectable finale that honors the characters and stays true to the elements that made these classic whodunits not just popular, but beloved.

Debonair sleuth Nick Charles (William Powell) and his intrepid wife Nora (Myrna Loy) return for a sixth time in this comedy-mystery that takes place largely within Manhattan's jazz milieu. When a despicable, two-timing bandleader is gunned down while trying to steal money from a club owner to pay off his gambling debts, Nick springs into action to help find the cold-blooded killer. Nora and their trusty dog Asta provide assistance, but it's ultimately up to Nick to sift through the shady suspects, investigate a second murder, and put together all the puzzle pieces before the climactic reveal. 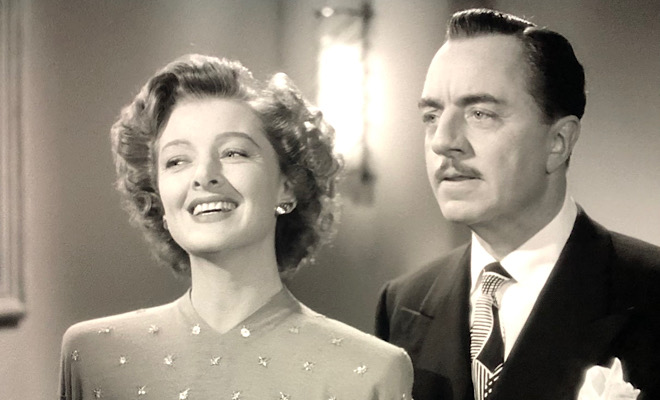 Like all of the Thin Man mysteries, Song of the Thin Man features a tightly constructed plot that hangs together upon review, but the story isn't as compelling and the script by Steve Fisher and Nat Perrin lacks the sparkle that defined so many of the previous installments. Much of the whimsy is gone, witty repartee comes at a premium, and most of the jokes revolve around Nick and Nora's lame attempts to use "hep" jazz lingo. The cocktails no longer flow freely and the decidedly middle-aged Nick and Nora aren't as agile as they used to be, but the couple still oozes charm, making it a pleasure to spend an hour and a half in their company.

Song of the Thin Man is still a comedy at its core, but under the by-the-numbers direction of Edward Buzzell it adopts a more serious tone than the other Thin Man films. Typical of the times, a noir-like style laces the proceedings, but the cynicism of the post-World War II era doesn't suit Nick and Nora, and maybe that's why this Thin Man episode would turn out to be the series' last. 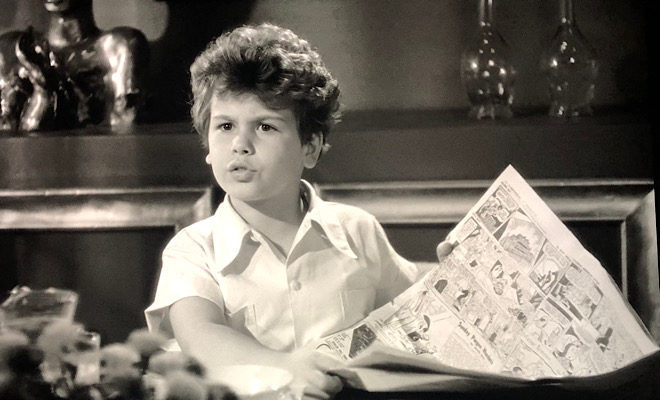 Powell and Loy both look a bit weary but manage to rise above the mediocre material. In her autobiography, Loy doesn't mince words about her negative feelings toward the film. "Song of the Thin Man was a lackluster finish to a great series," she writes. "I hated it." Thankfully, she hides her disdain while on screen, and Powell keeps his chin up, too. The saddest thing about Song of the Thin Man is that it marks the 14th and final time the enduring duo would co-star together. The end of an era indeed.

A stellar supporting cast also enlivens the film. Eleven-year-old Dean Stockwell makes a cute Nick Jr., Keenan Wynn delivers a few pointed quips, a young Gloria Grahame provides some sizzle as a sultry torch singer (though her vocals are dubbed), and Patricia Morison (who would achieve stardom a year later on the stage in the original Broadway production of Kiss Me, Kate), Leon Ames (who also appeared in The Thin Man Goes Home, albeit in a different role), Jayne Meadows, Clinton Sundberg, and Don Taylor all assert themselves well.

Nick and Nora may not be as smart as Hercule Poirot or as edgy as Philip Marlowe, but they're way more fun and will forever stand as icons in the detective genre. Song of the Thin Man isn't their finest hour-and-a-half and doesn't live up to its sister films, but it's a breezy trifle that's worth a spin if you're a Thin Man fan.

Vital Disc Stats: The Blu-ray
Song of the Thin Man arrives on Blu-ray packaged in a standard case. Video codec is 1080p/AVC MPEG-4 and audio is DTS-HD Master Audio 2.0 mono. Once the disc is inserted into the player, the static menu with music immediately pops up; no previews or promos precede it.

A brand-new 4K scan of the best preservation elements yields another stellar Thin Man transfer. The 1080p/AVC MPEG-4 rendering boasts excellent clarity and contrast, rich blacks, bright yet stable whites, and a vibrant grayscale that enhances depth and detail levels. Grain is well resolved, resulting in a silky picture that still resembles celluloid, top-notch shadow delineation keeps crush at bay during nocturnal scenes, and the typically glamorous MGM close-ups showcase fine facial features well. (Some crows feet and faint wrinkles remind us how much Powell and Loy have aged since the first Thin Man film 13 years before.) Costume and upholstery patterns are sharp, as are a couple of special effects process shots, and no nicks, marks, or scratches dot the pristine source material. The folks at Warner Archive didn't drop the ball on the final Thin Man transfer (not that I ever thought they would), and this top-notch effort nicely caps off one of the most popular series in Hollywood history.

The DTS-HD Master Audio 2.0 mono track supplies clear, well-modulated sound. A wide dynamic scale embraces all the highs and lows of the music score and jazz interludes without a hint of distortion, and all the dialogue is well prioritized and easy to comprehend. Sonic accents like gunfire and shattering glass are distinct and no age-related hiss, pops, or crackle intrude.

All the extras from the 2006 DVD have been ported over to this Blu-ray release.

The final film in the Thin Man series may not be one of the best, but it's still a stellar whodunit that keeps you guessing. The brisk mystery coasts on the charm of William Powell and Myrna Loy and features an impressive supporting cast that helps enliven a mediocre script. Another top-notch transfer from Warner Archive, solid audio, and all the supplements from the 2006 DVD make Song of the Thin Man a fitting swan song for a beloved franchise. Recommended.