A mad English scientist (is there any other kind?) entertains a young American visitor, serving up tea, terror and a terrific-looking daughter - who is soon torn between her father's evil ways and her need to protect the man she loves from a diabolical end.

With a fun and kooky title like 'Die, Monster, Die!,' one would half expect a wacky psychedelic, rockabilly absurdity that featured a motorbike gang, lots of tough chicks in high-heels wielding chains for weapons, and at least one drag race scene where Herman Munster shows up with his coffin-shaped DRAG-U-LA. Or perhaps, those are just my expectations. Though in my defense, given the decades of watching these sorts of low-budget independent productions, you can't blame me for fantasizing that one extra mile when watching Daniel Haller's 1965 horror flick. In fact, a couple years later, Haller went on to direct two rather enjoyable motorcycle pictures, 'Devil's Angels' and 'The Wild Racers.' So, there's that too.

I'm also a fan of Haller's 'The Dunwich Horror' with a very young Dean Stockwell and the movie pilot for 'Buck Rogers in the 25th Century.' So, it comes as a surprise this little supernatural creepshow starring the legendary Boris Karloff completely slipped through the cracks. There is no excuse for this offense, especially since it features one of Karloff's most restrained and straightforward performances, yet his portrayal is pretty darn dark, creepy, and theatrical. Playing the wealthy, wheelchair-bound Nahum Witley, the renowned actor gives the character a nervousness that immediately makes him a suspicious personality. The moment we meet him we know he's harboring a disturbing secret in the family mansion.

Very loosely based on the short story "The Colour Out of Space" by the celebrated master of sci-fi horror H. P. Lovecraft, the script is from Jerry Sohl, who wrote various episodes for series the likes of 'The Twilight Zone,' 'The Outer Limits' and 'Alfred Hitchcock Presents.' Lovecraft's grisly tale also serves as the inspiration for the much better 'The Curse,' directed by David Keith in 1987 and starring Wil Wheaton. Anyhow, Sohl's version replaces the original New England setting for the eerily atmospheric moors of a sleepy English countryside. American scientist Stephen Reinhart (Nick Adams) arrives and instantly greeted with mistrust and wariness by the locals when he starts asking for directions to the Witley house. 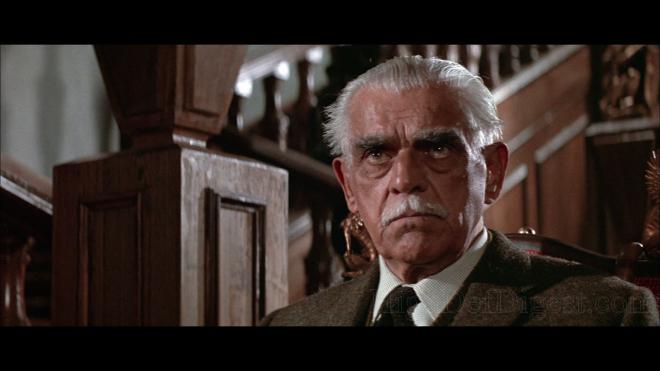 Made to walk the supposed several miles to the mansion, Stephen comes across a large, blacken and lifeless patch of land, as if some massive explosion had occurred there decades ago and adding another layer of mystery that's quite amusing. Haller also does a great job at generating a gloomy, macabre mood thanks to the cheese-tacular gothic production design. Of course, much of it feels and looks like a knockoff of a Roger Corman film, or better yet, like some sort of modern take of Edgar Allan Poe's 'The Fall of the House of Usher' with Corman's signature visuals. The similarities are probably none too surprising since Haller actually worked on that particular along with other Corman productions.

With so much in its favor — a strong mysterious opening, good direction and groovy gothic visuals — it's a wonder that the movie actually turned out rather poorly. And surprisingly, the problem is in the story itself. Narratively, 'Die, Monster, Die!' is pretty boring with very little to sustain it's fairly exciting start. After meeting Stephen's fiancée, Susan (Suzan Farmer), and her bedridden, dying mother (Freda Jackson), both of which add to the estate's cryptic secrets, the filmmakers choose to lounge about the mansion with Stephen following Mr. Witley to the basement, hidden rooms and the greenhouse. In spite of its charmingly macabre atmosphere making it bearable, the film's middle section weighs the plot down to a crawl. However, those with the patience to stick around are satisfyingly rewarded with an action-packed conclusion and cool special effects.

Shout! Factory brings 'Die, Monster, Die!' to Blu-ray under the distributor's Scream Factory line. The Region A locked, BD25 disc is housed in the normal blue case, and the back of the cover is decorated with a few stills from the movie. At startup, the disc goes to a generic menu with full-motion clips and music playing in the background.

'Die, Monster, Die!' will shock and amaze on Blu-ray with a spine-chillingly excellent 1080p/AVC MPEG-4 encode that will leave viewers terrified in fear. The source is astonishingly in pristine condition with nary a scratch or speck of dirt, showing lots of sharp detailing in various scenes, the plants in the greenhouse and the gothic interiors of Witley mansion. Discounting dated optical effects and transitions, fine lines and objects are very well-defined and distinct. Facial complexions appear healthy with natural, lifelike textures while colors are richly saturated and animated, providing the film with energy and an odd atmosphere. Contrast is comfortably bright and stable, and blacks are deep and accurate with penetrating shadows, giving the 2.35:1 image appreciable dimensionality.

The creeps, chills, and frights continue in the audio department thanks to a wholly satisfying DTS-HD MA mono soundtrack. Despite being restrained to the center, imaging exhibits a pleasant sense of presence, feeling decently wide with better than expected weight to the action and music. Although uniform and somewhat limited, the mid-range delivers plenty of clarity and detail, allowing for every footstep, thump and thunderous clang to be heard. A couple moments, of course, come off a tad too bright and screeching, but thankfully, they are few and far in between. Dialogue is precise and articulate, but as is always the case with old, cheap productions, the lossless mix is beset with audible hissing throughout.

Starring legendary horror icon Boris Karloff, 'Die, Monster, Die!' is low-budget creepshow from Daniel Haller that delights with its gothic visuals but sadly bores with a storyline that drags in the middle. The Blu-ray arrives with a shockingly excellent audio and video presentation, but no bonus material. The bare-bones package is ultimately for the most hardened cult collector and devoted fan.

Sale Price 35
Buy Now
3rd Party 35
In Stock.
See what people are saying about this story or others
See Comments in Forum
Previous Next
Pre-Orders
Tomorrow's latest releases