As M*A*S*H was winding down its legendary run on television, Alan Alda crafted the intricate grown-up drama/comedy The Four Seasons. Three upper-middle-class New York couples bound by friendships take seasonal trips to reconnect through a variety of personal tribulations. Smart direction, a great script, and terrific performances make this film a memorable highlight for the writer/director/actor. Kino Lorber Studio Classics brings this gem to Blu-ray but the transfer hasn’t seen much love and the audio mix gets the job done. If you’re a fan it’s an excellent film to have in the collection - but this isn’t the best it could or should look and sound. Worth A Look

Three upper-middle-class New York couples, Jack and Kate Burroughs (Alan Alda and Carol Burnett), Danny and Claudia Zimmer (Jack Weston and Rita Moreno), and Nick and Anne Callan (Len Cariou and Sandy Dennis) have been best friends for decades. Now with the kids out of the house, they’ve embarked on a series of seasonal trips to get away and enjoy themselves. But when Nick decides to divorce Anne and marry the much younger Ginny (Bess Armstrong), this once close-knit group of friends will fray under the strain of the new friendship dynamics and a reevaluation of their own marriages. 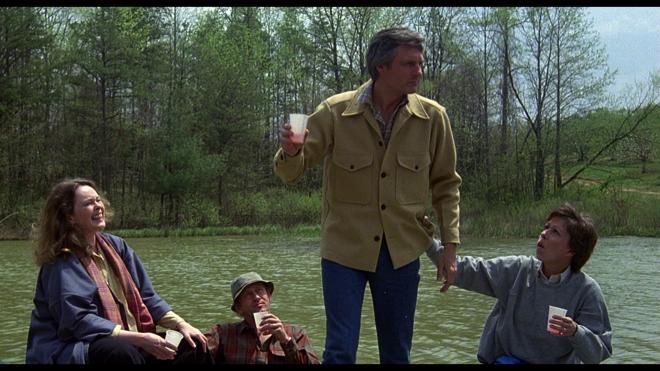 The Four Seasons has long been a family favorite in the camp I grew up in. Ever since my folks went out on a date night to see it in the theater it’s been a staple. Now growing up, I didn’t fully connect with it. I thought it was a nice movie with some funny moments but it was more or less what we watched when Mom and Dad pulled rank and put on what they wanted to see. As I got older I began to appreciate it a little more. Now that I’m knocking on the doors of 40 with a brood of my own, I get what writer, director, Alan Alada was shooting for with this film.

There’s this illusion that at some point life all gets easier, but the reality is that some parts may get easier - others get harder. Life is always work no matter how old you are or where you’re at with your career or how solid your marriage is. I feel that The Four Seasons is one of the rare movies to actually get it without becoming overly trite or so sentimental that it becomes a sappy melodrama. There are good days and bad days and sometimes it takes a lot of work to get to the good days and fully appreciate them. And while this film takes the material seriously, it’s also damn funny.

I love this scene because arguments like this feel real. You're not even sure what the hell you're arguing about at that moment. It's all emotion and heat without much logic or thought. In hindsight, they're amusing because they're so absurd but at the time they're like climbing Everest.

At the top of the pack, Alan Alda and Carol Burnett deliver two terrific performances as Jack and Kate Burroughs. They play off each other with a familiarity that makes a twenty or thirty-year marriage believable. Burnett is a highlight in her role picking up a well-deserved Golden Globe nomination. We may not get a lot from them but Jack Weston and Rita Moreno as the neurotic dentist Danny and his wife Italian wife Claudia bring the most humor to the show. Weston is particularly a gem here as one of the most honest characters of the film frequently detailing his deepest fears and worries - even if they’re hilariously absurd. As great as those four actors are, I have to give a special call-out to Len Cariou as Nick.

Nick is the one whose decisions about his life affect the entire group. He’s unhappy in his relationship with Anne and so he jumps ship to the younger and more exciting Ginny. Doing this has carved Anne out of the lives of the rest of the group and he’s also unintentionally alienated his daughter. When I was younger he was a character that was easy to hate. Now that I’m older, this latest viewing was a “holy shit, I get it!” experience. Not that I’ve been tempted to stray in my marriage and my kid isn’t out of diapers yet, but I understand the stresses and strains that rip at a relationship and how essential it is to communicate with your partner rather than bottle it all up. Watching this movie you realize while you try to be Jack you’re actually a lot like Nick with a growing list of neuroses like Danny. 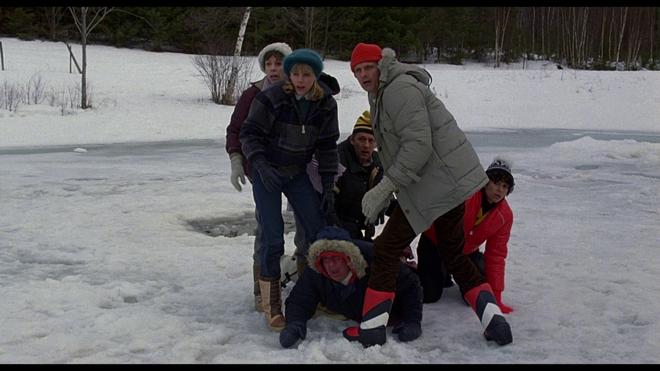 Alda’s smart script and simple direction let the mature themes and ideas flourish and resonate with the audience - while also visiting some gorgeous locations set to the classic works of Vivaldi. I certainly can’t fully relate to the lifestyle these folks live (and certainly not during a global pandemic), but I appreciate the dynamics and the character arcs while enjoying Alda’s subtle humorous touches. The Four Seasons is genuinely an excellent movie for a date night at home viewing curled up with your spouse or partner.

Vital Disc Stats: The Blu-ray
The Four Seasons takes a vacation on Blu-ray thanks to Kino Lorber Studio Classics with a single-disc release. Pressed on a Region-A BD-50 disc, the disc is housed in a standard sturdy case and loads to a static image main menu. 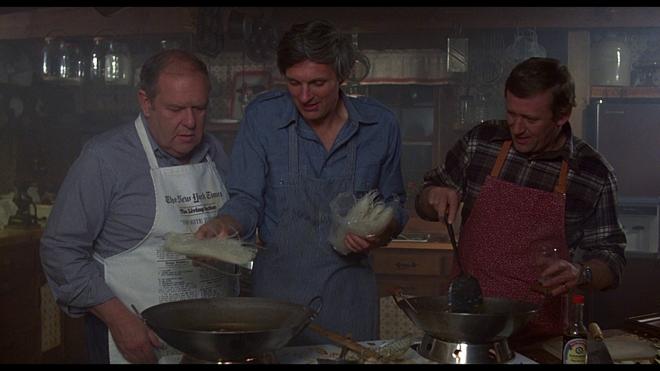 I’ve been waiting for quite a while for The Four Seasons to come to Blu-ray and while I’m glad it’s here, I wish it was arriving with a little more fanfare for its 40th Anniversary. Like so many other Universal catalog releases that get licensed out to various labels, The Four Seasons hasn’t seen much love since the DVD days of years past. While there are some nice fine details to enjoy, the image quality isn’t the top-tier effort I’d hoped for. A step up from the DVD, yes, but just that.

The biggest issue here - and a common issue for Universal catalog titles - is the unfortunate edge enhancement. This image is very crunchy leading to some rather inorganic lines and harshness to the feel of the picture quality. Grain is also very clumpy and unresolved indicative of an older archival scan. Colors are pretty good depending on location, the fall and winter scenes are appropriately drab but the summer/spring sequences brighten up nicely and you get some better primary activity. Black levels are also on the murky brown side without the ideal true inky color we like to see - so image depth is also a tad flat. Age-related speckling is apparent throughout but no real serious damage. For a popular film when it came out I’d hoped for better but I can live with this. 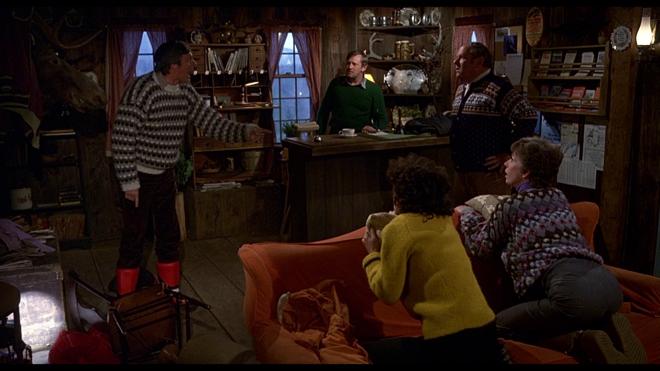 The Four Seasons comes packed with a decent but rather flat-sounding DTS-HD MA 2.0 track. Dialog exchanges are strong enough, you never have to struggle to hear anything, but at the same time, there’s a flatness to the track that’s hard to ignore. Same for sound effects and even the selections from Vivaldi’s compositions just barely check off the boxes. Not a terrible track, I’ve heard far worse tracks from this era, but similar to the video transfer could be better with a little more TLC. 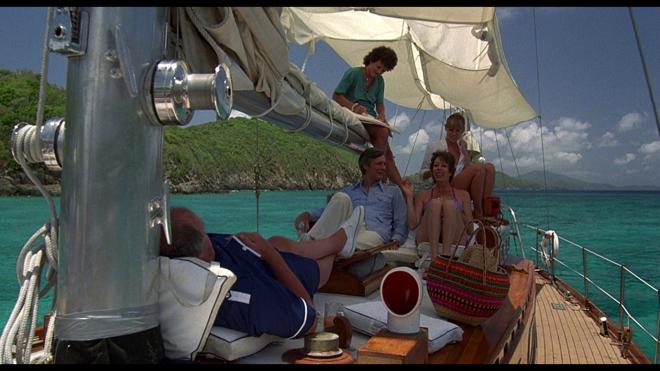 Bonus features are on the slim side, the main highlight for this release is an interesting commentary track with Entertainment Journalist and Author Bryan Reesman. After that, it’s the typical collection of trailers and marketing materials. 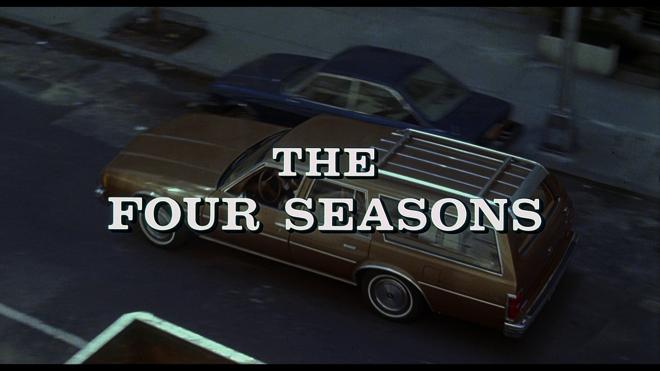 The Four Seasons is a terrific film; a mature and hilarious look at the complications of relationships and friendships. It’s one of the few movies that I enjoy and appreciate more as I age along with it. Alan Alda turns in a heck of a picture with a great cast and a lovely story. Now on Blu-ray from Kino Lorber Studio Classics, I wish it had been given a little more care and attention over the years. Certainly an improvement over the DVD release, but there’s a lot of room for improvement in the A/V arena. If you’re a fan of the film it’s a great one for the collection. If you’ve never seen it, this disc is absolutely Worth A Look at the very least.